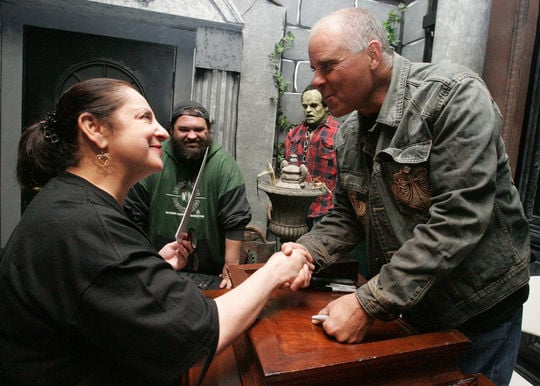 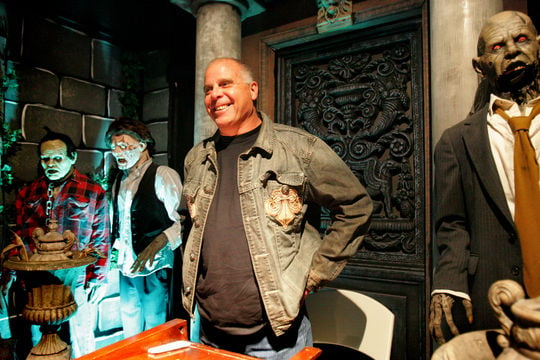 SALEM — "Halloween" is usually ranked as one of the scariest horror films of all time. Spawning seven sequels and grossing more than $50 million following its release in 1978, it has also been one of the most successful.

Tony Moran, the actor who played escaped mental patient Michael Myers in the film, was at Count Orlok's Nightmare Gallery, 285 Derby St., yesterday, and will be there today, tomorrow and next Friday from noon to 4 p.m. to sign autographs for fans.

In the film, Michael Myers never speaks. He stalks and kills his victims while wearing an eerily blank mask. Moran shared the role with actor Nick Castle, who did most of the stalking and stabbing. But Moran plays the villain in the film's climactic scene, when Michael Myers is momentarily unmasked.

He spoke to The Salem News yesterday.

How did you get the part of Michael Myers?

I had the same agent as my little sister, Erin, who played Joanie in the TV show "Happy Days." She said, "It's slow, but there's this low-budget, B film ..."

What were you doing at the time?

I had done a few things. I was sleeping on a couch at my buddy's place, typical actor.

Did you know any of the other actors?

My agent said "Jamie Lee Curtis will be in it," and I was like, who's she? But Donald Pleasance ... I was a big fan of his, I had seen him in "The Great Escape" and thought he was fabulous.

I met (director John) Carpenter and (producer Irwin) Yablans in a tiny little office above some retail place off an alley. We just talked. My agent called that afternoon and said, "You've got the part."

This was before independent films were serious business?

In 1978, there was no such thing as "low-budget." But they made this movie in 21 days for $300,000. Movies were made by studios like Paramount, which made "Happy Days." I mean, when I met Carpenter, and he stood up — he had a ponytail down the middle of his back.

When I was filming that scene, I was embarrassed. In 1978, there was no such thing as a horror movie where the main character wears a mask. A horror movie with a mask!

What happened to the actual mask your character wears?

Disintegrated. It's gone. They bought two or three of them; they were dollar masks of William Shatner from "Star Trek." It had no features. They spray-painted it white.

I had to put Vaseline in my hair, because hair and latex are like Velcro when you pull it off. I used vinegar to get the Vaseline out. That was back when I had hair.

Did you like the film when you saw it?

When I saw it, I thought, This guy's onto something. I went with my girlfriend and sat in the back ... not that anyone would recognize me. But I'm sitting there thinking, Hey, this is good. But I didn't think it would do anything like it has.

What do you think made it work?

There's so many elements that made it successful: the story, the music, the mystery, the family connections. The suspense. There's no blood in the movie, but when you leave you feel like you've seen a bloodbath. It's the suspense. Carpenter did a fabulous job.

Were you in any of the other "Halloween" films?

They asked me to do "Halloween 2," but I didn't want to do it. They offered to pay me to use some of my footage left over from the first film. I was down with that.

How many appearances like this do you do in a year?

How long have you been doing signings?

Four years. I acted until I was 30, then I got out of Hollywood. I went underground. I was working at a mortgage place, and some guy came to find me. Said he'd been trying to find me for 10 years. He talked to me three or four times, wanted me to sign things, DVDs, posters, pictures. He told me there were these horror conventions where rabid fans would pay to have me sign autographs.

What was your favorite horror film growing up?

Besides signings, what are you up to?

I'm back into acting, in the independent film world, not Hollywood. I've just finished making a movie called "Beg."

What questions do fans most often ask you?