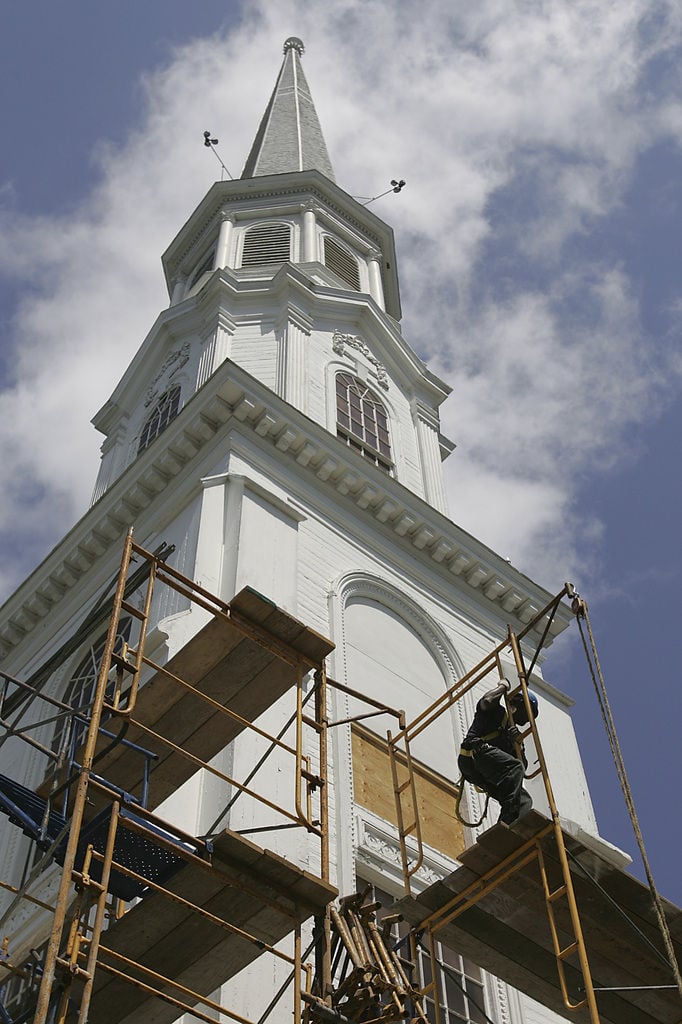 A worker climbs scaffolding to reach the roof of the First Baptist Church in Beverly while repairing the church's steeple on Tuesday afternoon. 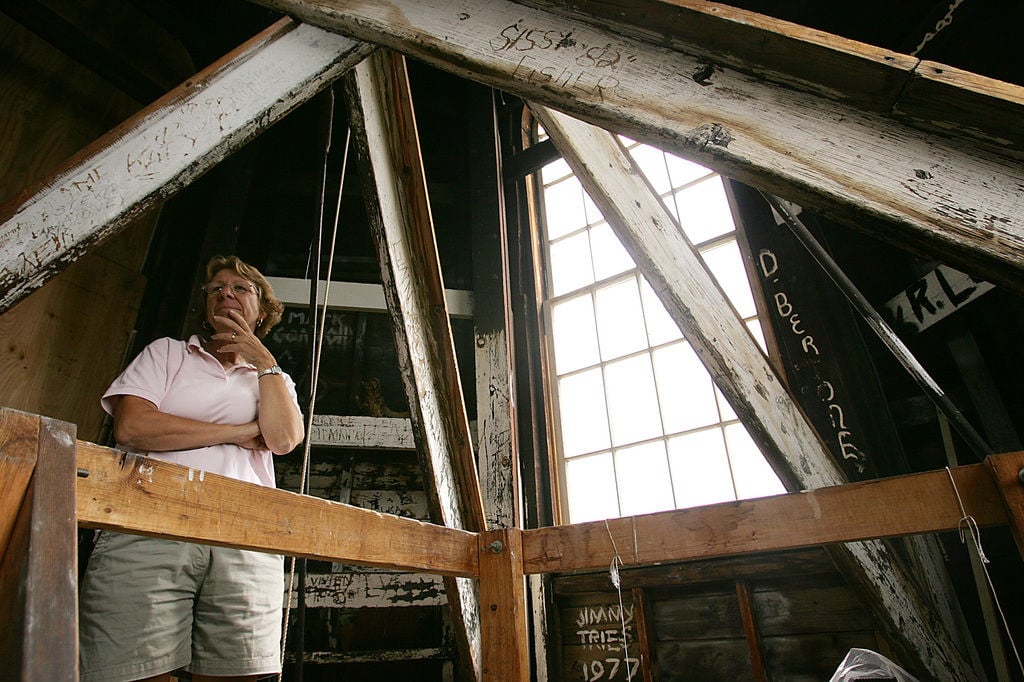 Pamela Constentine talks about the history of the steeple at the First Baptist Church in Beverly from inside the tower on Monday afternoon.

A worker climbs scaffolding to reach the roof of the First Baptist Church in Beverly while repairing the church's steeple on Tuesday afternoon.

Pamela Constentine talks about the history of the steeple at the First Baptist Church in Beverly from inside the tower on Monday afternoon.

BEVERLY — Since 1869, the steeple at the First Baptist Church has weathered wind, rain and a major fire and sustained some broken windows, missing shingles and peeling paint along the way. That damage is now about to be repaired.

The sturdy structure, with its bronze bell, its light that signals ships across the harbor, and writing on the beams and walls declaring who has loved whom over the years, is well worth the $500,000 to preserve it, said property committee chairwoman Pamela Constentine.

Workers from American Steeple and Tower Co. of Salem are installing scaffolding from the sidewalk on Cabot Street to the tip of the spire and throughout the summer plan to replace all the windows and siding, seal around openings and the bell deck with copper, upgrade the lightning protection system, and make other repairs, both structural and cosmetic. The overall appearance of the steeple won't change, but it will look newer and stand tall as a symbol of Beverly well into the future, Constentine said.

"This is a real leap of faith to do this work, because we haven't raised the money for it yet," she said. But construction costs aren't getting any cheaper, and members of the church felt it was important to do the work now.

"You never know when reinforcing it is going to pay off," she said.

Call it fortuitous, but in 1974 church members reinforced the structure and increased their fire insurance. A year later — on a Tuesday in August 1975 — a blaze ripped through the 880-seat, Elizabethan-style sanctuary with a circular balcony and 475-seat chapel downstairs. Although the fire destroyed the church building, firefighters from 17 communities were able to save the steeple.

Constentine said the bell began to toll by itself as a crowd peered through the smoke and flames.

"It must have been updrafts, or something hitting the ropes," she said. One of the reasons it survived not just the fire, but other storms through the years, is because it's designed to be flexible up top, with a strong foundation.

"If it was windy, we'd be moving," Constentine said, as she peered out the slated windows at downtown Beverly.

After the fire, the foundation was made even stronger when 300 tons of concrete were poured into the base and connected to the floor with four steel beams. The cross beams were also strengthened.

The work done in the 1970s made it an easy decision to put more money into it now, Constentine said, but they didn't really need an excuse.

"The historical significance is just too much to let it go," she said.

The steeple marks a place of worship, but it's rare to have a church that also serves as a working lighthouse. The Coast Guard installed a range light in the steeple in 1921 as more ships began using the harbor to get to the Salem power plant. Vessels line up the lights at Baker's Island and Hospital Point with the light in the steeple to navigate a straight line coming into the channel. It shines every night, even now, and can be seen 13 miles out to sea.

The light is a steady beacon in the night, guiding ships through the darkness. The steeple has a strong foundation, but it's also flexible, which is how the First Baptist Church has lasted for 207 years.

"Those are such great symbols for a church," Constentine said.

After the fire, they attached a new, modern worship building to the steeple, so the church is split between centuries. Constentine walked on neat tiles, and then stepped over a line onto white concrete.

A small room where Beverly Bootstraps used to be was dusty and quiet. As she got to the top of a wide spiral staircase, she pointed to a spot where numerous couples have posed for prom and wedding pictures. She stepped from concrete to wood as the air got hot and stale and climbed up three flights of stairs, with warnings like "Go Back" painted on the walls. They were left over from a haunted house.

"This is just too cool a space not to let the kids come up sometimes," she said. Farther up, she grabbed onto a wooden ladder and using the metal handholds for balance, began to slowly make her way to a narrow platform where children aren't allowed. Up another ladder and another platform, and finally she emerged at the top of the bell tower.

Some of the windows were boarded up with plywood, but others were covered with slates that could be peered through. A breeze flowed through the room as she looked down on the city nearly 160 feet below her.

And with the restorations, perhaps it will last another century.

"It seems like it's the right thing to do," Constentine said.