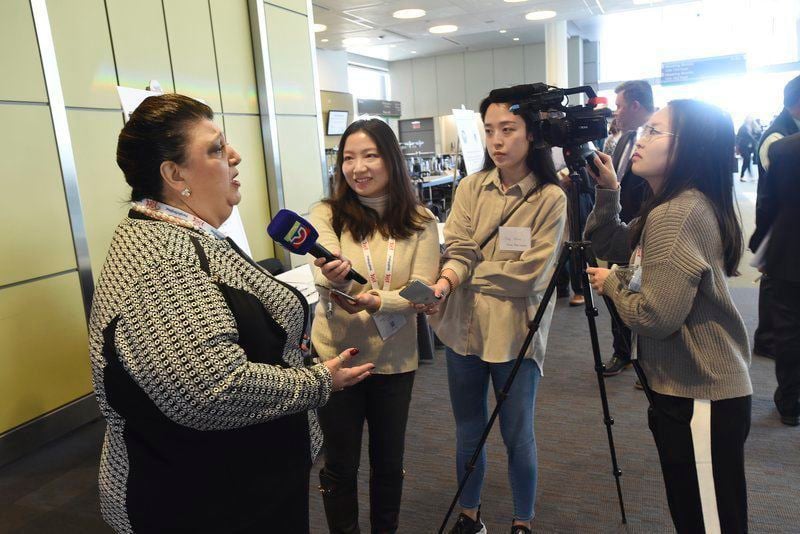 PAUL BILODEAU/Staff file photo/Gloucester Mayor Sefatia Romeo Theken is interviewed by the Chinese media during last year's Seafood Expo North America and Seafood Processing North America in Boston. Coronavirus is a concern for the organizers of next month's show. 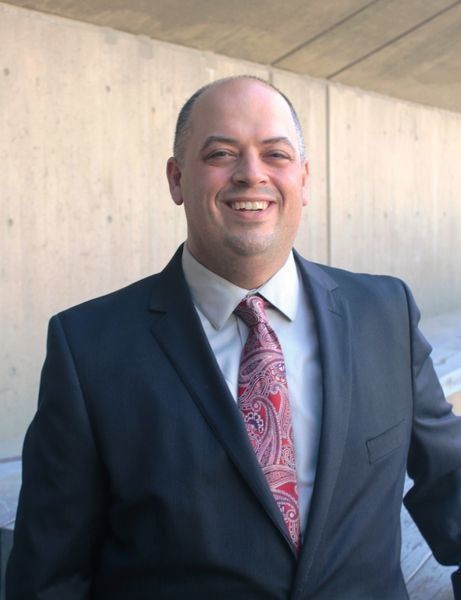 “This is something the whole world is watching and we, like everybody else, hope it gets resolved soon,” Gloucester Economic Development Director Di Stefano said. “But our mission remains the same and that is to connect Gloucester seafood businesses with international seafood buyers and other potential customers. We’re looking forward to another successful seafood show.”

PAUL BILODEAU/Staff file photo/Gloucester Mayor Sefatia Romeo Theken is interviewed by the Chinese media during last year's Seafood Expo North America and Seafood Processing North America in Boston. Coronavirus is a concern for the organizers of next month's show.

“This is something the whole world is watching and we, like everybody else, hope it gets resolved soon,” Gloucester Economic Development Director Di Stefano said. “But our mission remains the same and that is to connect Gloucester seafood businesses with international seafood buyers and other potential customers. We’re looking forward to another successful seafood show.”

It’s still more than a month away, but the organizer of the Seafood Expo North America is gauging the potential impact of the novel coronavirus — and current travel bans — on the sprawling, international seafood trade show at the Boston Convention & Exhibition Center.

Diversified Communications, the show’s organizer, said it continues to monitor the expanding public health crisis, both domestically and internationally, in the ramp-up to the seafood show that last year drew 22,150 visitors and 1,329 exhibitors from 49 countries.

The show, which also contains a processing element, is set to run March 15 to 17.

To date, the eruption of the coronavirus in China and other parts of Asia “has not impacted attendee and exhibitor registration” for the show, Diversified Communications said in a Jan. 31 statement.

“The health and safety of our attendees and exhibitors is our primary concern,” the Portland, Maine-based multimedia company said in the statement. “We look forward to a successful event.”

In a subsequent statement last week to the Gloucester Daily Times, a sister paper of The Salem News, Diversified Communications said 80% of the visitors and exhibitors to the annual Boston seafood trade show come from the United States, Canada and Mexico. It said 5% come from China.

“As we monitor the impacts of the current travel ban in place, it has potential to affect those coming from China who represent 5% of the combined visitor and exhibitor attendee base annually,” according to the statement. “The situation is fluid and we’ll continue to monitor the impacts. The event is tracking well when comparing pre-registration and exhibitor numbers to previous years.”

The city of Gloucester will make its sixth consecutive appearance at the Seafood Expo North America and its pointman — Economic Development Director Sal Di Stefano — said it is working closely with the show’s organizer, the Massachusetts Convention Center Authority and the state to follow the safest protocols.

“This is something the whole world is watching and we, like everybody else, hope it gets resolved soon,” Di Stefano said. “But our mission remains the same and that is to connect Gloucester seafood businesses with international seafood buyers and other potential customers. We’re looking forward to another successful seafood show.”

Diversified Communications said it is adhering to guidelines from the Centers for Disease Control and Prevention and is working with the Massachusetts Convention Center Authority (MCCA) and other local health agencies “on recommended protocols to protect our customers and attendees while at the Expo.”

The MCCA, which oversees the convention and exhibition center in South Boston, has its own public safety department that works with first responders and public health agencies on safety and public health issues that arise during events.

Noonan said the MCCA has medically trained public safety staff on site. It also conducts pre-event security and safety surveys to help determine where exhibitors and attendees originate their travel.

The convention authority, he said, also has benefited from the experience of hosting events during other public health scares, such as those involving ebola, SARS and MERS.

“We want to be very in-tune with where our customers are coming from and we will share that data with MassPort, Logan Airport and public health officials when necessary,” he said.

Noonan said the MCCA always takes additional precautions during traditional flu seasons, such as by posting more signs on the benefits of regularly washing hands and deploying additional sanitizing stations.

He said MCCA facility cleaning staffs also are tasked with cleaning more frequently in general areas where people congregate, with a particular focus on regularly cleaning items people touch all the time, such as escalator handrails and elevator buttons.

According to most recent totals, international public health officials said the coronavirus is responsible for at least 910 deaths and more than 40,000 confirmed cases worldwide. The vast majority of the confirmed cases are in China.

On Feb. 1, the Massachusetts Department of Health confirmed the state’s first case of coronavirus, involving a man in his 20s — a student at UMass Boston — returning to Boston from Wuhan, China. He is one of 12 confirmed cases of the coronavirus in the U.S.

The CDC has recommended travelers avoid non-essential travel to China and the U.S. State Department took it one step further, issuing a “do not travel” advisory.

Public health officials, in cooperation with the Massachusetts Port Authority, are screening inbound international travelers at Logan Airport. Several airlines have halted flights to and from China.

The federal Department of Health and Human Services on Feb. 2 instituted what it described as temporary measures to contain the spread of the coronavirus.

“Foreign nationals, other than immediate family of U.S. citizens and permanent residents, who have traveled to China within the last 14 days will be denied entry into the U.S. for this time,” HHS Secretary Alex Azar said in a briefing.

Also, any U.S. citizen returning home that visited Hubei Province — the epicenter of the Chinese outbreak — in the previous 14 days will be subject to up to 14 days of mandatory quarantine “to ensure they’re provided proper medical care and health screening.”

Any U.S. citizen returning from the remainder of mainland China within 14 days “will undergo proactive entry health screening at a select number of ports of entry” and up to 14 days of monitored self-quarantine” to ensure they are virus-free and pose no public health risk.

Market Data by TradingView
Stay in touch with your community!
Sign Up Now!