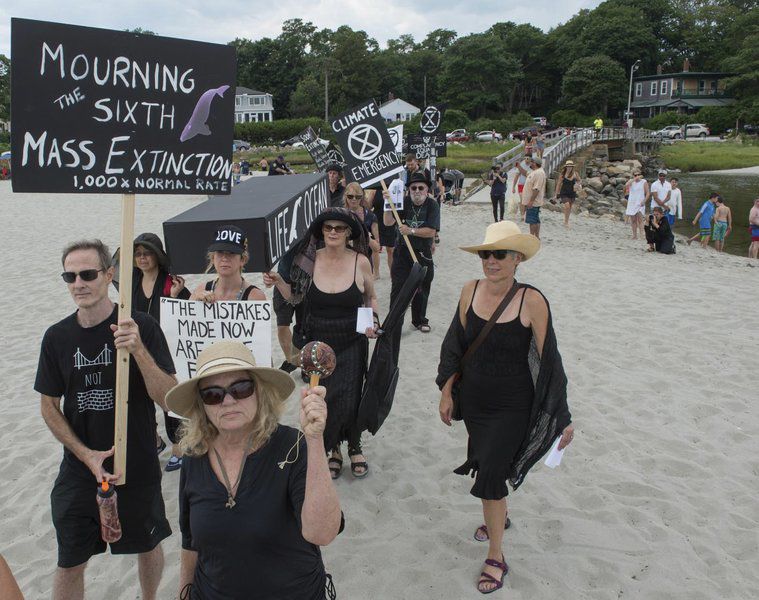 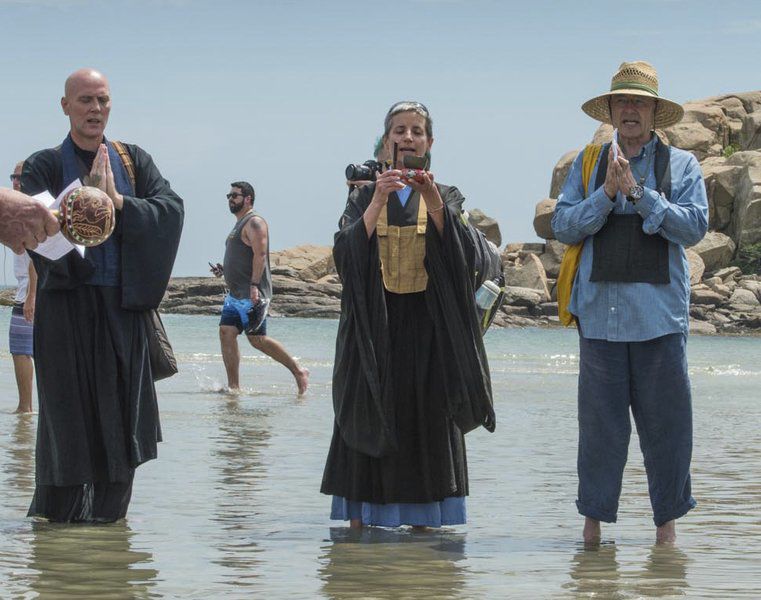 For some, the sight of a black-clad funeral procession carrying coffins and singing "Amazing Waste" on Good Harbor Beach Sunday was a bit much.

But for organizers of the “Extinction Rebellion Funeral for Good Harbor Beach and Atlantic Ocean: Mourning the Sixth Mass Extinction,” the day was a great opportunity to remind summer beachgoers what's at stake when it come to climate change.

“The message we’re trying to spread is that human interaction has caused various species to go extinct at a way higher rate – like a hundred to a thousand times higher – than if there were no human intervention,” said procession organizer Amanda Nash, a member of the Massachusetts chapter of Extinction Rebellion. “A lot of species have already gone extinct and a lot more are on their way, especially species in the ocean.”

The group is an international movement that fights inaction on climate change through nonviolent acts of disobedience.

Nash said another goal of the procession was to inform beachgoers that increased temperatures and rising sea levels will eventually destroy coastal areas like Good Harbor and other parts of Gloucester.

“Smaller communities on the water, like down in Louisiana and parts of the South Pacific, have had to move out (because of climate change),” said Nash. “Even here, we’ve had our own crazy climate stuff happening, so I wish people wouldn’t close their eyes to it.

As the procession moved from the footbridge to the opposite end of Good Harbor and back Sunday, hundreds of beachgoers gathered around the mourners when they stopped for moments of silence, sang songs like “Amazing Waste” – a modified version of “Amazing Grace” that details the harmful effects pollution has had on the ocean – and played “Taps” on a horn.

“It was a little scary. I wasn’t expecting it, and I didn’t really understand it, but they definitely are making their statement,” said Dina Juhasz, who was visiting Good Harbor on a daytrip from Natick.

“I think climate change is something we all need to be aware of since we’re already seeing the effects of it. (The protest) did make me pause and think a little bit.”

Some people nodded and clapped for the procession as it went by.

Others, both on and off the beach, were upset by the protest.

Several beachgoers said aspects of the procession were in poor taste in light of two mass shootings that happened in the U.S. on Saturday – one outside a bar in Dayton, Ohio and another in a retail area El Paso, Texas – that left 29 people dead and 53 injured.

Nash said she did not mean for the procession to be offensive. According to Nash, the procession was also a time for mourning those lost in the mass shootings because “all of these crises are connected.”

“(Gun violence and climate change) are not in competition with each other...” Nash said. “Our funeral was for all of the victims of the modern age, not just climate change… this was a funeral for experiencing grief for the things we have lost and will continue to lose. Whatever grief people were experiencing at this time was welcomed at this occasion.”

Some parents at Good Harbor said the procession was simply inappropriate for the beach.

“We had to explain to our kids what a funeral and coffin was,” said Stephanie Silva. “We shouldn’t have to do that on a beach day.”

“We’re all teachers so we look at (this procession) as a teachable moment,” said Victoria Ruzzo, a middle school educator who was visiting Good Harbor with friends.“It’s hard to be a parent and have to explain (this procession). We’re teaching to a future where we don't know what’s going to happen… but saying that there is something you can do no matter who you are is a teachable moment.”

Officer Mark Foote of the Gloucester Police Department said he received several complaints about the procession but that the event was peaceful.

While people may have had different reactions to the procession, beachgoer Jennfier Saves, who was visiting from Vermont, said they can all agree on one thing.

“I’ve never seen this before,” said Saves. “People are going to remember that this was on the beach.”