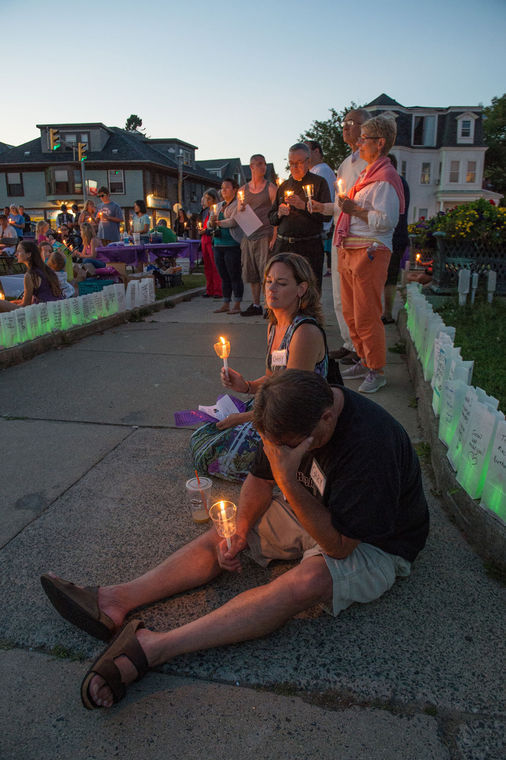 Gary Langis reflects at a vigil for victims of opioid overdoses on Gloucester’s Stacey Boulevard last September. With him is his partner, Kathy Day, who helped organize the event. 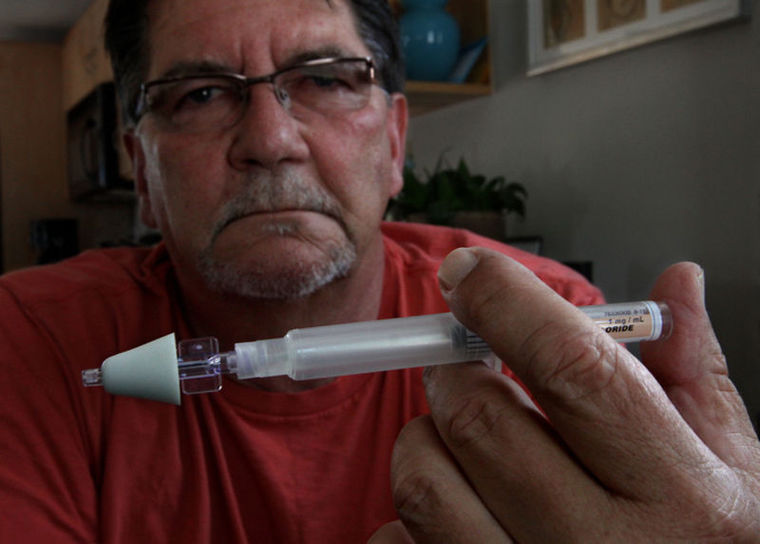 Gary Langis of Gloucester holds a nasal atomizer syringe containing naloxone, commonly known by the trade name Narcan, an opioid antagonist that can save the life of someone who overdoses on heroin or other opioids. The city was the first to supply both its fire and polce departments with the lifesaving drug, but Langis believes it should be made available to anyone people close to opioid users.

Gary Langis reflects at a vigil for victims of opioid overdoses on Gloucester’s Stacey Boulevard last September. With him is his partner, Kathy Day, who helped organize the event.

Gary Langis of Gloucester holds a nasal atomizer syringe containing naloxone, commonly known by the trade name Narcan, an opioid antagonist that can save the life of someone who overdoses on heroin or other opioids. The city was the first to supply both its fire and polce departments with the lifesaving drug, but Langis believes it should be made available to anyone people close to opioid users.

An ocean of praise has washed over Gloucester since the unveiling of its innovative “angel” program, which treats opioid abusers as addicts in need of help instead of criminals who deserve to be in a jail cell.

There are thousands of thank you messages on the Gloucester Police Department’s Facebook page.

A typical entry: “I hope your forward thinking spreads across the nation. You took action and are creating a viable solution. God bless each of you.”

Everyone from Gov. Charlie Baker to Congressman Seth Moulton has offered support. Pharmacies and treatment centers are lining up to participate.

Amid that glow, however, is a sense of desperation, one the city has felt before.

In the first five months of this year, Gloucester — despite being the first city in Massachusetts in which both Fire and Police departments carried the anti-overdose drug Narcan — lost five lives to opioid overdoses.

For Gloucester residents, those words read like tragic deja vu. As locals of a certain age will tell you, this isn’t the first time heroin has landed Gloucester in the headlines.

Back in the late 1960s, when addiction was typically contained to the needle parks of bright lights big cities America, heroin rolled like a wave onto Gloucester’s shores. An epidemic in a hypodermic needle, it pierced the town’s most vital artery, Main Street, where on hot summer nights, heroin was easier for teens to buy than a cold beer.

“The ‘80s was a tough economic decade for Gloucester,” he recalls. “Dukakis’ Massachusetts Miracle was creating jobs all over the state, but the miracle passed us by, and economic despair bred addiction.

“By the late 1980s, the national media was calling Gloucester a heroin capital, and that was really tough to hear.”

In 1988, in what locals called a cheap shot, The Boston Phoenix called the oldest seaport in America “the addicted city.” It was a stunning blow.

“In a city of 25,000, one out of 125 Gloucester residents is a junkie,” staff writer Ric Kahn wrote. The New York Times later upped the ante, reporting the numbers at “roughly one resident in 100, a rate 62 percent higher than the statewide average.”

Gloucester may have disputed the numbers, but there was no disputing the death toll: 36 heroin-related deaths in a decade, 10 fatal overdoses in 18 months spanning 1988-89. Back then, recalls Tobey, there was nothing to go by, no road map out of the crisis.

“So we had to do what Gloucester has a long tradition of doing. We rolled up our sleeves,” he said.

The town became a trailblazer of grass-roots activism, a boots-on-the-ground battlefield of citizens determined to drive heroin out of town. A Mayor’s Drug Task Force was established, dealers were prosecuted to the full extent of the law. There was no Internet back then, but there was the power of the pen, and Gloucesterites wielded it like a weapon, using the Gloucester Daily Times as a platform for swapping ideas, observations, strategies.

By late 1989, the national media was telling a different tale — of citizens galvanized by mutual tragedy, of a significant decrease in fatal heroin overdoses and drug-related crime, of new drug and AIDS programs. Gloucester’s methadone clinic — the first of a dozen funded by the state — had opened its doors, providing innovative addict-accessible services and a drug rehabilitation program located in the heart of downtown.

Gloucester’s resourcefulness did not go unrewarded. In 1992, the newly spawned Gloucester Prevention Network received $1.9 million from the federal Office of Substance Abuse Prevention. The five-year, community-wide program took its cue from the city’s original grass-roots initiatives, and by 1997 had achieved its mission of using the city’s addiction problems to create solutions; a model, a road map for other communities to follow.

But by then the landscape of addiction itself was changing. By then, Purdue Pharmaceutical’s powerful opiate-based pain killer Oxycontin — the brand name for the generic oxycodone, a close chemical cousin to heroin — had been on the market for a year. Propelled by massive, aggressive marketing, its annual sales skyrocketed, and so did deaths due to prescription opioid overdose.

In May 2007, Purdue Pharma, which marketed Oxycontin, paid for its sins in federal court to the tune of $600 million in fines on criminal and civil charges of misleading regulators, doctors and patients about the drug’s high risk of addiction. In Massachusetts, funds from that settlement were made available through the office of then-Attorney General Martha Coakley to 10 communities, including Gloucester, for one-year grants to advance the prevention of opioid addiction and fatal overdoses.

It was one of many grants Gloucester utilized in the first decade of the new century dedicated to opioid related advances. Jack Vondras, who from 2005 to 2011 was director of Gloucester’s Health Department, brought an unprecedented amount of grant money to the city to combat substance abuse. In 2008, that included MassCall2 — a three-year pilot program focused on expanding the availability of and training in the use of nasal Narcan.

Gloucester was one of 12 communities in this Massachusetts Department of Health initiative. Managed by Northeast Behavioral Health, a Lynn- and Gloucester-based nonprofit, more than 2,000 opioid addicts, along with friends and families, were trained to use nasal Narcan, saving an estimated 335 lives.

The year 2008 was also when Joan Whitney came onboard the Healthy Gloucester Collaborative. It was a busy time.

“Just a giant number of people started getting involved, and a ton of stuff started going on that wasn’t going on anywhere else,” says Sue Hochstedler, clinical leader of Addison Gilbert’s innovative daytime Discover Program.

Hochstedler, who has worked with addicts for decades, credits Whitney’s leadership with “creating a group that’s so far ahead, we have other towns coming to learn from us.”

A former human resources director with a 21st century skills set, Whitney readily acknowledges the work that helped her hit the ground running. And run she did, strategically reorganizing Healthy Gloucester Collaborative into a network in which the collaborators came to involve half the town — healthcare professionals, hospitals, police and fire departments, schools, local theater, backyard gardeners — all working together like a well-oiled machine.

But perhaps most critical of all, getting nasal Narcan into the hands of those who need it most — addicts — was a trickier business.

As long-time addict advocate and activist Gary Langis, puts it, “They’re scared of authority. Authority is what prosecutes them.”

Once a user himself, Langis has worked with many groups, including Healthy Gloucester Collaborative. Nowadays, he is something of a maverick, providing addicts with something any road map or GPS should provide: an alternate route.

“I’ll just ask them in the street if they need help, and if they do, I give them my card,” he said.

Help from Langis — who reports to the state — can be anything from instructing addicts on how to access nasal Narcan or HIV-preventing syringes at their local pharmacy, to calling 911 for EMS response to a possible overdose, to responding himself to a possible overdose when the addicts involved are too afraid to call 911.

“These people are so used to being criminalized,” says Langis, “they don’t even trust the Good Samaritan law to protect them if they call in an OD on 911, so if I have to do it, I do it.”

Together with his partner, Kathy Day, who is northeast manager of “Learn to Cope,” a vital support network for friends and families of addicts, Langis organized and runs Gloucester’s annual candlelight Overdose Vigil. The crowds that gather quietly in the dusk at summer’s end have become a familiar sight on the waterfront. Their grief is palpable, their learning curve has been long and excruciating, but from it Gloucester continues to learn.

As the names of the lost rise up into the night, Gloucester recognizes in them their own: not addicts, but cheerleaders, football players, beloved sons, daughters, mothers, fathers, brothers, sisters, husbands, wives, friends, neighbors.

The Heroin Crisis: A 3-Day Series

Day 3: Does anyone know what to do?

Where to Find Help

If you need help right away, or know someone who does, click here for a list of resources in the area.