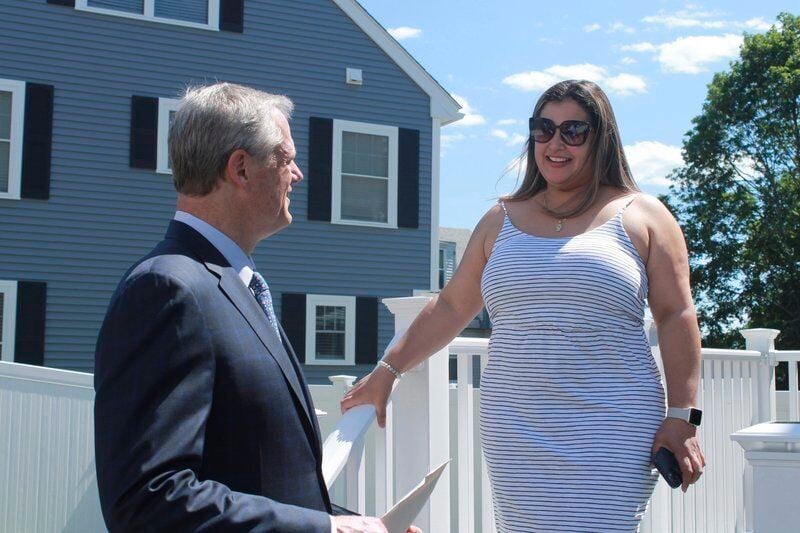 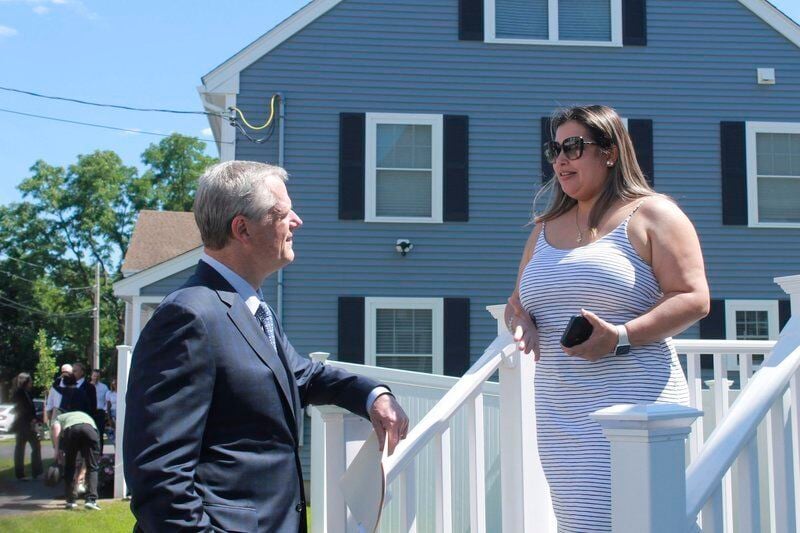 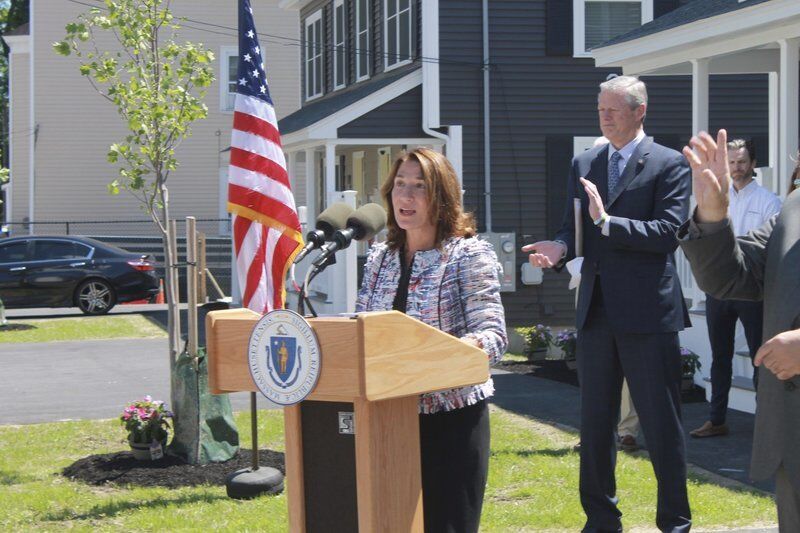 MIKE LABELLA/Staff photoLt. Gov. Karyn Polito, left, and Gov. Charlie Baker joined other state officials in Haverhill on Thursday to celebrate new affordable homes built by Bread & Roses Housing of Lawrence at the site of the former St. George's Church on Washington Street, and to announce funding to help build more affordable housing across the state.

MIKE LABELLA/Staff photoLt. Gov. Karyn Polito, left, and Gov. Charlie Baker joined other state officials in Haverhill on Thursday to celebrate new affordable homes built by Bread & Roses Housing of Lawrence at the site of the former St. George's Church on Washington Street, and to announce funding to help build more affordable housing across the state.

HAVERHILL — Gov. Charlie Baker and Lt. Governor Karyn Polito were in Haverhill on Thursday to discuss the MassHousing CommonWealth Builder Program and a plan for investing in the state’s economic recovery using $2.8 billion in American Rescue Plan Act funding.

They joined with other state officials, including Secretary of Housing and Economic Development Mike Kennealy, Secretary of Administration and Finance Michael Heffernan and MassHousing Executive Director Chrystal Kornegay to celebrate seven new affordable homes built by the nonprofit Bread & Roses Housing of Lawrence at the site of the former St. George’s Church on Washington Street.

Baker, standing in front of one of the new duplexes, said the program helps fund the construction of housing such as the new Bread & Roses development.

Baker announced a plan that would immediately put to use approximately $2.8 billion of the state’s direct federal aid to help “jump-start” the state’s economic recovery by investing in urgent priorities, with a particular focus on supporting populations he said have been hardest-hit by COVID-19, such as lower-wage workers and communities of color.

The plan is being filed as an amendment to “An Act Relative to Transferring Federal Funds to the Federal COVID-19 Response Fund,” which was on the governor’s desk and is being returned to the Legislature.

Baker said his plan includes $200 million for the Builder Program and similar programs that aim to close the wealth gap faced by communities of color by connecting first-time homebuyers with homeownership opportunities.

In total, the plan devotes $1 billion to funding homeownership and housing priorities, which Baker said is a significant investment to help increase housing production and reduce barriers to owning a home as part of the ongoing COVID-19 recovery effort.

The plan also includes funding for economic development programs such as revitalizing downtowns, as well as for job training and health care programs such as addiction treatment and behavioral health services.

Mayor James Fiorentini said the city contributed $150,000 in its local share of HOME funds, from HUD, to the Bread & Roses project. The city also applied for and was awarded $250,000 in Housing Choice Capital grant funds for construction costs.

The mayor also said the city provided four of the seven new residents with $7,500 each in First-Time Homebuyer Assistance funds, totaling $30,000. All of the new homeowners are Latina women, the mayor said.

“This is an affordable homeownership project to which the city contributed over $430,000 and lots of permitting assistance,” he said.

“We need market rate housing,” the mayor added. “We need affordable housing. We need to reopen the American dream so that people who are starting out in life have the hope and the dream that I had when I started out, that I would be able to buy my own home. That’s what I want for the citizens of my community and this project gives seven families the American dream.”

The church on Washington Street was abandoned in 1998 when four Catholic churches in the city consolidated.

Bread & Roses maintains ownership of the land through a community land trust, so that more low income families can take over a home if the residents decide to move. It’s also stipulated that the houses must remain owner-occupied and cannot be rented.

Yesenia Gil, executive director of Bread & Roses Housing, said her organization targeted residents who earn 30 to 60 percent of the median household income in the area and met the program’s rigid criteria.

One of those new homeowners is Jessica Peralta, a sales agent with United Food Brands and a mother of three sons. They were all living in a cramped apartment on Locust Street but now have one side of a new, two-story duplex.

“I’m very happy to have my own home,” Peralta said. “I’m thankful for Bread & Roses for giving us this opportunity.”