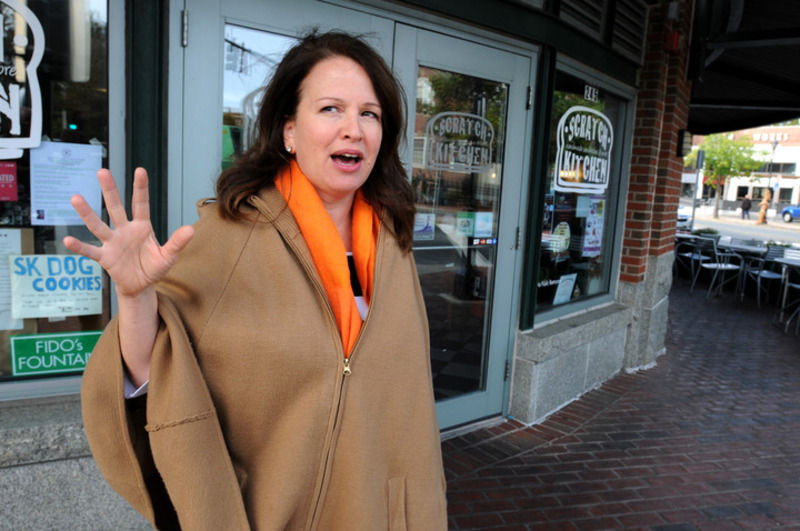 Karen Scalia, owner of Salem Food Tours, speaks about her business while walking through Salem. She describes herself as a foodie who once ran a restaurant in New York. 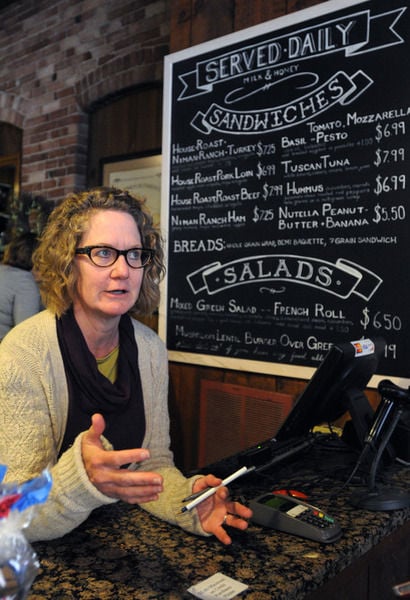 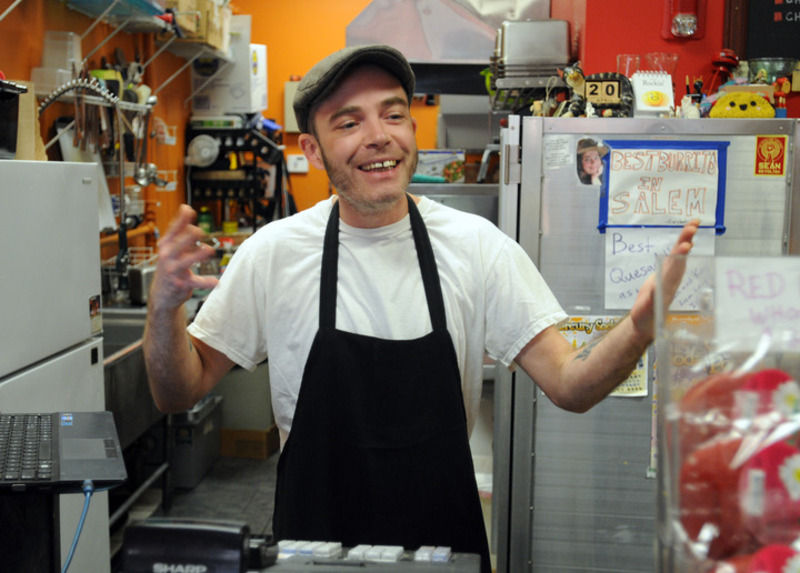 Shawn Morrison of Comida Mexican Taqueria on Essex Street talks about his homemade salsa, which he prepares with fresh, locally sourced ingredients. 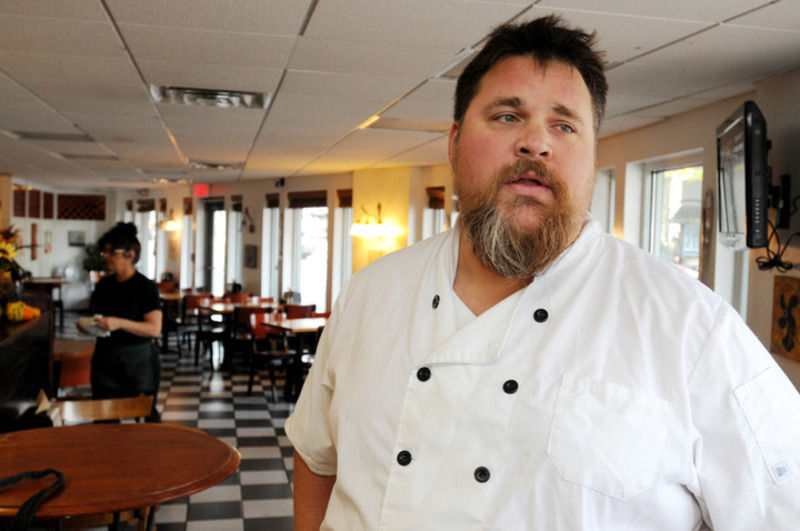 Scratch Kitchen's chef Bill Fogarty says he makes everything from scratch, from breads to pickles to mayonnaise. 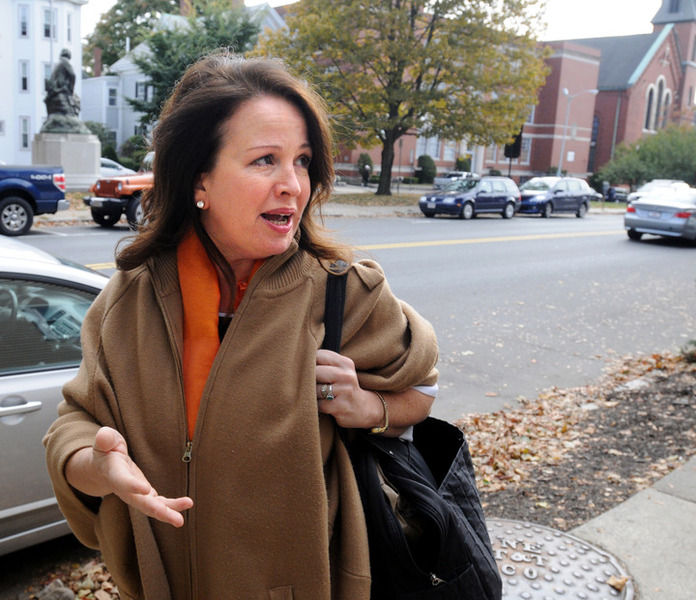 Salem: Karen Scalia, owner of Salem Food Tours, speaks about her business while walking through Salem. She describes herself as a foodie who once ran a restaurant in New York. Photo by Ken Yuszkus, The Salem News, Thursday, October 10, 2013. 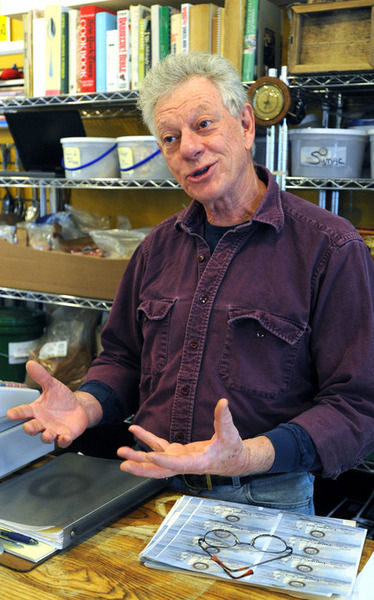 David Bowie of Salem Spice at the Pickle Pot on Pickering Wharf stocks some 200 kinds of spices -- an appropriate shop for Salem, he said, which was once known throughout the world for its pepper trade.

Karen Scalia, owner of Salem Food Tours, speaks about her business while walking through Salem. She describes herself as a foodie who once ran a restaurant in New York.

Shawn Morrison of Comida Mexican Taqueria on Essex Street talks about his homemade salsa, which he prepares with fresh, locally sourced ingredients.

Scratch Kitchen's chef Bill Fogarty says he makes everything from scratch, from breads to pickles to mayonnaise.

Salem: Karen Scalia, owner of Salem Food Tours, speaks about her business while walking through Salem. She describes herself as a foodie who once ran a restaurant in New York. Photo by Ken Yuszkus, The Salem News, Thursday, October 10, 2013.

David Bowie of Salem Spice at the Pickle Pot on Pickering Wharf stocks some 200 kinds of spices -- an appropriate shop for Salem, he said, which was once known throughout the world for its pepper trade.

SALEM — Local actress and marketing consultant Karen Scalia got the idea for Salem Food Tours as a way to mix the city’s spice trade history with its happening food scene.

Last year Scalia was conducting walking tours of the city for children’s groups when she began researching Salem’s history, and it struck her the city would be ripe for a food tour showcasing its historic place in the spice trade with restaurants that source local foods.

“You have to have a really good, solid food scene; Salem definitely has that. But what really tipped it, what really created the idea for me, was when I started to study the spice trade history.”

The motto of the city, after all, reads: “To the farthest port of the rich East.” The city’s seal shows a sailing vessel off the coast of Sumatra. Also, Scalia said, when Salem was founded, it was the dried cod industry that sustained the community.

Her solo business is more than a year old, and Scalia averages at least one tour a week with a minimum of six people each. Most of her guests are from the North Shore and Boston area, many of whom come away surprised by what Salem has to offer, she said.

Tours cost $54 per person, last about three and a half hours, and are usually run in the mid-to-late afternoon. They typically involve tastings at five to seven Salem eateries. Scalia counts about 25 local eateries as partners, plus so-called location partners, like the Salem Farmers Market, Aroma Sanctum and the Phillips House where guests also go. All partner restaurants have made the commitment to source at least one food item locally.

“I think Karen has done a great job for the city itself just showcasing all the various restaurants that are out there,” said chef Bill Fogarty of Scratch Kitchen, which is located on the corner of Congress and Derby streets at the base of the South Harbor Garage.

Each tour is unique, Scalia says, because not all the tour partners are visited during each tour. She leaves it up to the chefs to come up with a menu for the tastings.

“They are the artists, they are the ones who are creating these beautiful items,” Scalia said.

Scalia certainly has her food chops down. A native of Chelsea, she ran a restaurant in New York and has worked in corporate event planning.

“I am not a trained chef, but my friends are not upset when I invite them for dinner,” Scalia said. “I’ve always been a foodie and I’ve always been very interested in eating organic, healthy and local sourcing. That has kind of been a kind of a battle cry for me for years.”

She also has a knack for being in front of people. She’s a voice-over actress.

“If you don’t blink, you might catch me on a commercial every once in a while,” Scalia said.

The tours not only boost Scalia’s business, they bring customers to her tour partners.

“It’s great to have Karen start this business because it brings a lot of people into the store,” said Sharon Driscoll, owner of Milk and Honey Green Grocers, at 32 Church St. “People who live on the North Shore who may not have been through this way get exposure to the store, which is great.”

Scalia will start her tour at Salem Spice at the Pickle Pot on Pickering Wharf, which allows her to highlight Salem’s relationship to the spice trade. Owner David J. Bowie (no relation to the pop star), has run the culinary store for more than two years. Salem Spice features more than 200 spices without preservatives or anti-caking agents.

Bowie said it also makes sense to have a spice shop in Salem, which was once known all over the world for its trade in imported pepper.

“The maritime industry here in Salem is so dynamic,” Bowie said. “And for 90 years we were the leading aspect of the sailing trade around the world.”

Other Pickering Wharf stops may include 62 Restaurant and Wine Bar for a cooking demonstration with Chef Tony Bettencourt, or a tasting at Finz Seafood and Grill, where owner George Carey has made a commitment to sustainable and fresh seafood. Scalia might pop by Longboards Cafe and Bar, which Matt and Justin Mattera recently opened, which takes pride in its lobster rolls.

Another well-known Salem eatery, The Grapevine Restaurant, is also a possible stop.

“Chef Tim Caldwell’s food is fabulous,” Scalia said. “He’s doing modern Mediterranean, he’s locally sourcing fresh. As a matter of fact, they have a beautiful new deck out back where he’s growing his own fresh herbs, and he is taking those and using them in the kitchen.”

Last Thursday, Scalia visited Scratch Kitchen, where chef Fogarty, a Beverly resident, has been taking cooking from scratch with locally sourced ingredients to a whole new level for the past 21/2 years.

He makes everything from scratch, including breads, pickles, ketchup, mayonnaise and his own bacon. The restaurant even serves up bacon-dusted popcorn. Fogarty shops the Salem Farmers Market, buys produce from Maitland Mountain Farm in Salem and Wenham’s Canaan Farm, and gets his goat cheese from Valley View Farm in Topsfield.

“Probably the reason why we do cook from scratch is we like to know what’s in our foods,” Fogarty said. Locally grown food also tastes better, he added.

On Essex Street, the tour sometimes stops at Comida Mexican Taqueria, where chef Shawn Morrison makes homemade salsa from fresh, locally sourced ingredients. Demand for his “build-as-you-go” burritos and tortas (a panini-like sandwich) has him upping his lease for another two years.

Salem native and Beverly resident Amy Pearson, manager of Turtle Alley on the Essex Street pedestrian mall, has nothing but praise for Salem Food Tours, which she said has increased her business. Those who take the food tour on Saturday usually come by on Sunday to buy something they sampled the day before.

The tours have proved so successful that Scalia plans to expand the tours to the North Shore for excursions of up to 30 people visiting local farms, wineries and eateries.

Aptly, she said, her business is “growing organically.”