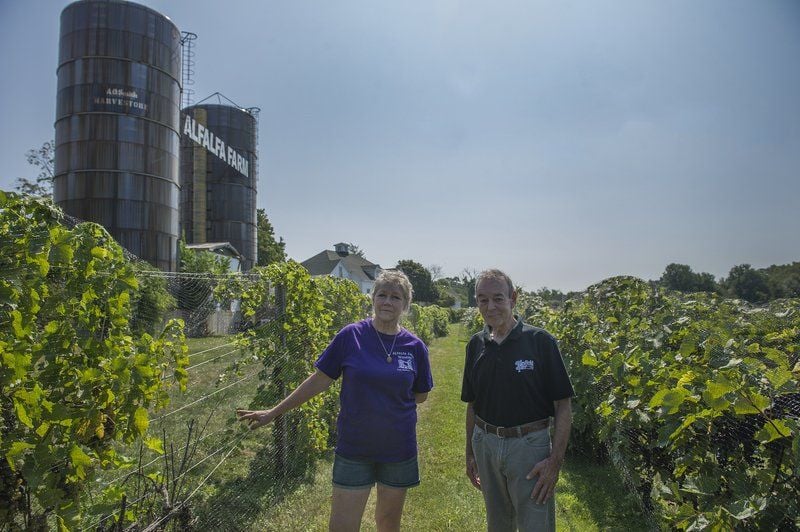 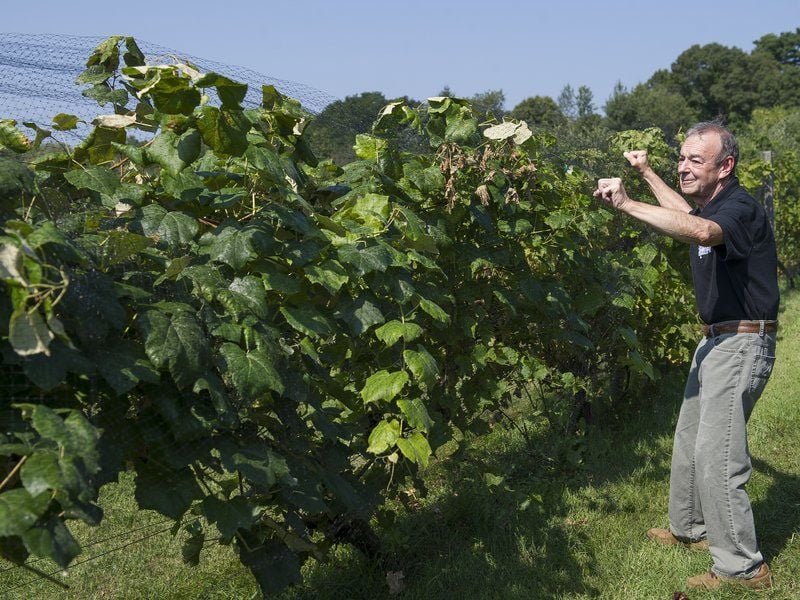 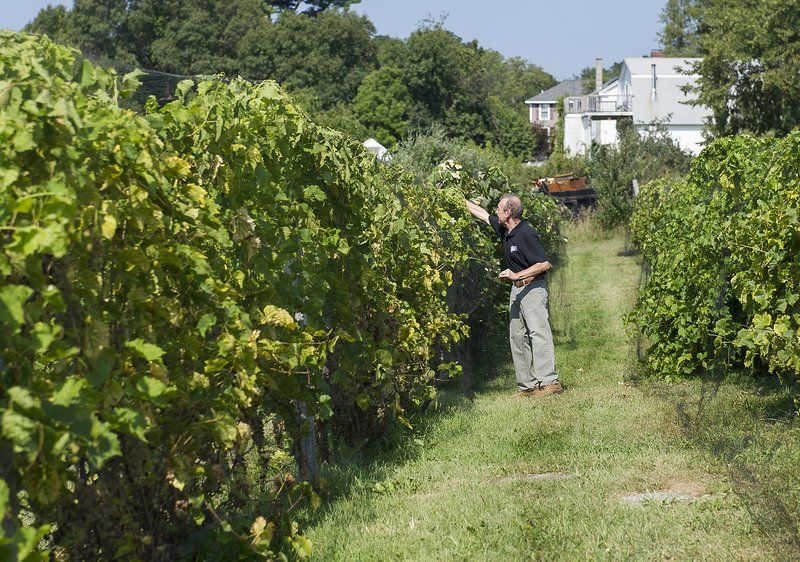 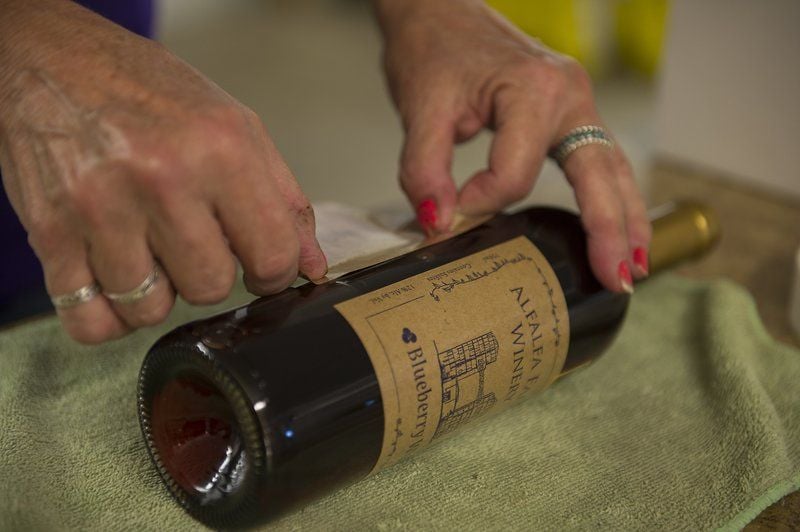 Labels are placed on bottles of blueberry wine made by the Alfalfa Farm Winery in Topsfield. Blueberry is one of the most popular wines they make. 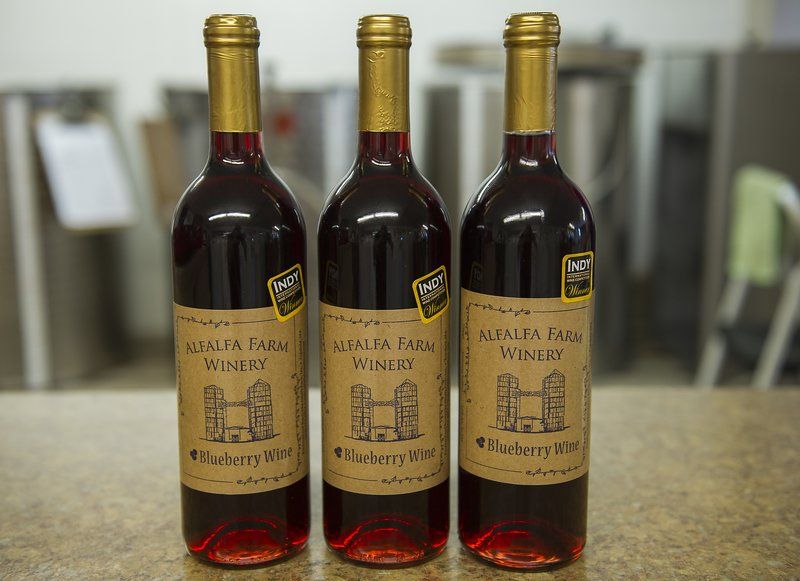 Blueberry wine made by the Alfalfa Farm Winery in Topsfield recently won an award at the Indy International Wine Making competition at Purdue University.

Labels are placed on bottles of blueberry wine made by the Alfalfa Farm Winery in Topsfield. Blueberry is one of the most popular wines they make.

Blueberry wine made by the Alfalfa Farm Winery in Topsfield recently won an award at the Indy International Wine Making competition at Purdue University.

For most people, this time of year marks the end of summer. For the folks at Alfalfa Farm Winery in Topsfield, it marks the beginning of something: harvest season.

This harvest season -- which comes amid the 20th anniversary of the winery — kicked off last weekend. Richard Adelman, the owner, and Trudi Perry, the event planner and winemaker, joined 13 volunteers in the fields on Saturday and Sunday, picking grapes ready to be turned into wine.

Volunteers are a big part of the process. Hundreds help throughout the year, Adelman said. And that, along with the visitors who come to learn about the winery, is Adelman’s favorite part of the business. Perry agrees.

“The people that we work with, meeting new people and seeing them come back, seeing them have a good time, is definitely the best part,” said Perry, who’s been associated with the farm for about 15 years and has been its winemaker for five. “It’s like having hundreds of people on your best-friends list. It’s cool.”

Forty years ago, when Adelman bought 10 acres of what had once been a 600-acre dairy farm, he kept horses and beef cattle. But one day his brother, David Adelman, a chemical engineer, suggested they take his personal hobby, wine-making, and turn it into a business.

So they planted some grapes, and the business grew from there.

“It evolved pretty gradually. Everyone we talked to in the wine business said it’s a gradual business to evolve. It’s a lot about when people get to know you,” said Adelman, who attended Colorado State University and worked on farms in Essex and at CalTech.

They started advertising and eventually began offering tastings on weekends and hosting functions and events, which Adelman said they now do almost every week.

As their business has grown, so, too, has the industry of farm wineries, within Massachusetts and even the country.

“When we started, we were, I think, the 13th winery in the state. Now there’s about 40,” said Adelman. “People are more interested in buying locally produced products, becoming more aware of local agriculture.”

Adelman and Perry attribute this to the rise of the grow local, buy local movement and to the Department of Agriculture’s campaign to encourage what’s called agri-tourism, something the farm participates in by offering winery tours. Adelman said he’s always surprised by how interested people are in the details of making wine. But that interest has only been good for the farm.

Perry, who keeps the books for the farm, joked that she’s “watched the checkbook get healthier” over the years. And the grapes, she said, have improved recently, as well.

Last year Alfalfa Farm made 1,000 cases of wine, despite delays caused by the severe winter. This year’s harvest is bigger. Perry, Adelman and the volunteers picked more than 3,000 pounds of grapes last weekend, which also marked an earlier harvest than usual.

“The harvest was a lot earlier and a lot bigger. It’s early because of the way the weather was; it was hot and dry for such a long time,” said Perry. “It was very good this year.”

They can mark their success not only in the large grape haul and growing visitor numbers, but a recent award. Their blueberry wine won a Double Gold award at the Indy International Wine Making competition at Purdue University in July.

Perry said the blueberry is one of the farm’s most popular flavors. Another favorite is the Marechal Foch. Favorites among the wines made with imported grapes include the Pinot Grigio, Leon Millot and Seyval Blanc.

Adelman said it’s the quality of the wine they produce that makes people want to come back. Often they’re drawn there in the first place by the farm’s history.

“We’ve been here longer than most other [wineries], and a lot of people have always been familiar with the silos of Alfalfa Farm,” said Adelman. “And we’re right off Route 95, so people notice us.”

It also helps that they have a strong presence in the community. They participated in five farmers markets this summer, including in Newburyport, Ipswich and Swampscott. They also established an amateur wine-making contest about 10 years ago as part of the Topsfield Fair. Perry serves as a judge, sampling 25 to 30 entries this year, which Adelman said is up 50 percent from the number of entries last year. The winners will be announced during the fair, and the entries will be on display in the festival grounds’ Coolidge Hall.

Next up for Alfalfa Farm, located at 267 Rowley Bridge Road: Adelman and his team will host their annual Harvest Festival Oct. 17 and 18 from 1-5 p.m., featuring live music, tours, tastings and more.

In the more distant future, he simply wants to produce and sell more wine.

“We hope to meet more people, have them gloat and tell more people about us,” added Perry. “The best part is for us to meet someone who knows someone who’s been here, or who personally has been here and comes back. So we hope to continue in the same way.”