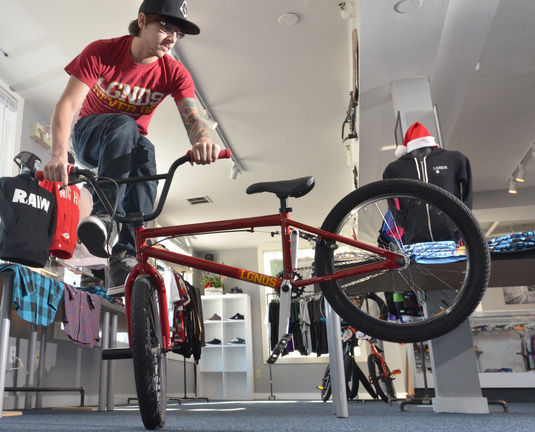 Ricky Brandano displays a BMX trick at his store on Pickering Wharf in Salem. He also loves to ride at the skate park in Peabody. 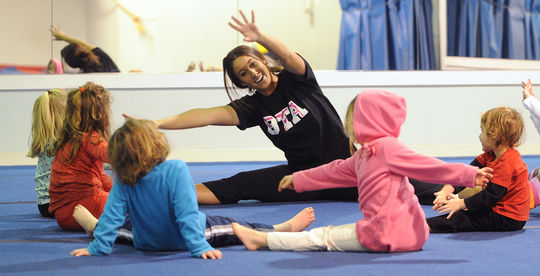 Jennifer Burke, 24, does warm-up exercises with 3- and 4-year-old students at Burke's Tumbling Academy, which she opened in 2009 in Swampscott. 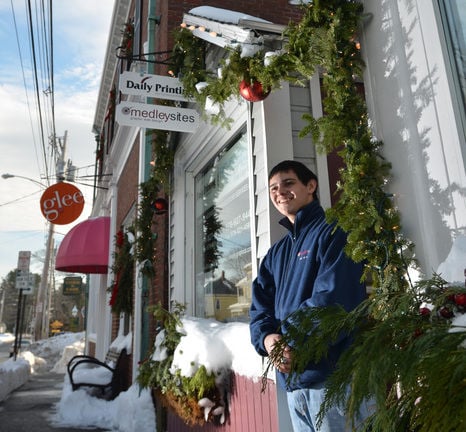 Medley Long, the 18-year-old owner of MedleySites Graphic Web Design, stands outside his office on West Street in Beverly Farms.

Ricky Brandano displays a BMX trick at his store on Pickering Wharf in Salem. He also loves to ride at the skate park in Peabody.

Jennifer Burke, 24, does warm-up exercises with 3- and 4-year-old students at Burke's Tumbling Academy, which she opened in 2009 in Swampscott.

Medley Long, the 18-year-old owner of MedleySites Graphic Web Design, stands outside his office on West Street in Beverly Farms.

Ricky Brandano of Peabody was talking to his father one day last year about how much he really wanted to open his own store.

In November, Brandano opened LGNDS, a skate, BMX bike and apparel shop at Pickering Wharf in Salem. With that bold step, he joined a select group of young entrepreneurs on the North Shore who have surprised more than a few people with their precocious ability to follow through on a dream of starting their own business.

That group includes Medley Long, an 18-year-old from Beverly who has his own Web design business, and Jennifer Burke, a 24-year-old from Swampscott who opened Burke's Tumbling Academy in December 2009.

Brandano, a 2008 Peabody High School graduate, said he got the idea for his own shop on a trip to California, where he saw many stores that catered to the lifestyle of action sports, fashion and music that he grew up with.

At 20, Brandano was already a member of the work-a-day world, having forgone college to work full time as a Web developer. He had saved enough money to fund one-third of his startup costs, he said. His father came through with the rest.

Brandano mans the store seven days a week, with occasional help from his friends. He said business is going well, and he expects it to pick up in the spring when thoughts turn more to outdoor activities.

"You have to be really committed to it," Brandano said. "I don't think I realized how much until I did it."

According to Long, the 18-year-old Web designer, one of the biggest obstacles facing young business owners is persuading people to take you seriously.

Long opened his Web design business in Beverly Farms shortly after graduating from Beverly High School last June. He got help from Daily Printing owner Jerry DiFazio, who offered space for Long's business inside his store.

DiFazio also started his business at the age of 18, Long said, so he has been very encouraging. But Long said others look at a kid just out of high school and are skeptical.

"Being the youngest member of the Chamber of Commerce, it's quite hard to talk to someone who's got like 30 or 40 years on you," Long said. "Sometimes people have a hard time trying to take you seriously, but you can't let that discourage you."

Long might be young, but he's already compiled an impressive ré©sumé©. At age 10, he played the role of Tiny Tim in "A Christmas Carol" at North Shore Music Theatre. At 15, when he and his family lived in Georgia, he started his own community theater company.

Long was working as a busboy at Danversport Yacht Club and doing Web design work on the side when he decided to turn the design work into a full-time job. He said he cashed in the bonds he's been saving since he was 2 years old to help with the startup costs.

"I don't come from a family with a lot of money, so it was quite challenging," he said.

Long's only employee is his mother, Jackie, a Web designer. He said he's had 35 clients since his business began in June. Eventually, he wants to go to college and get into politics.

"I never really envisioned myself doing this," he said. "I would like to continue on as far as it would take me."

Burke's earliest foray into the business world came as early as her sophomore year of high school, when she was coaching Pop Warner cheerleading in Swampscott and two of her cheerleaders asked her to teach them gymnastics.

"I started teaching out of my basement, and the next thing I knew people started calling me and saying, 'Can you teach my daughter to do a back handspring?'" said Burke, a former Level 9 (out of 10 levels) gymnast.

Burke ran a summer camp in her backyard for five years, then rented space at a dance studio in Salem to accommodate her growing clientele. In December 2009, at the age of 23, using money she had saved from her five years of teaching, she opened Burke's Tumbling Academy on Elm Place in Swampscott. A year later, she has 500 kids ages 18 months and up walking through the door every week, 17 employees (including one of her former gymnastics coaches), and four cheering teams. When she wrote her business plan, she expected to host about 15 birthday parties per year; last year, she had more than 200.

Burke attended Marian Court College for two years and felt some pressure to get her bachelor's degree. But ultimately, she knew she was making the right decision to concentrate full time on her growing business.

"It's my passion, my love," she said. "I wanted to do this since I was little girl. A lot of people are scared to do it, and that's why it doesn't happen. All you have to do is follow your dream."