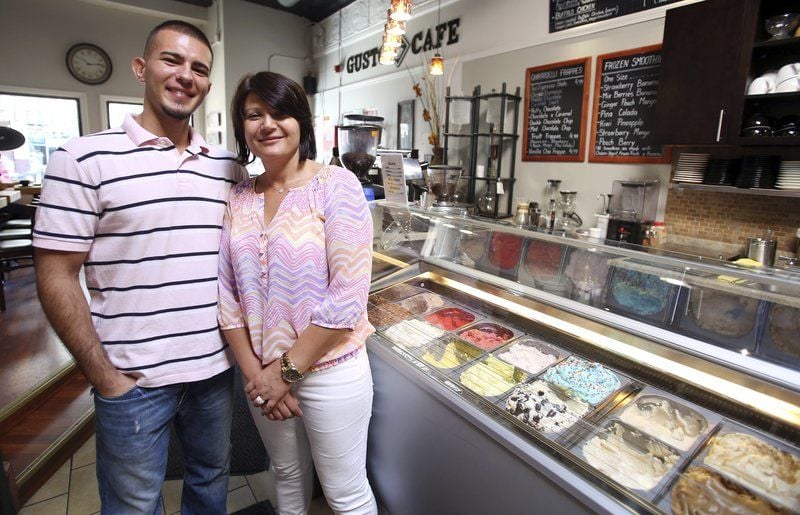 Albana Meta, right, owner of Gusto Cafe in Beverly, with her son Clay, who makes the gelato for the small downtown Beverly coffee shop. 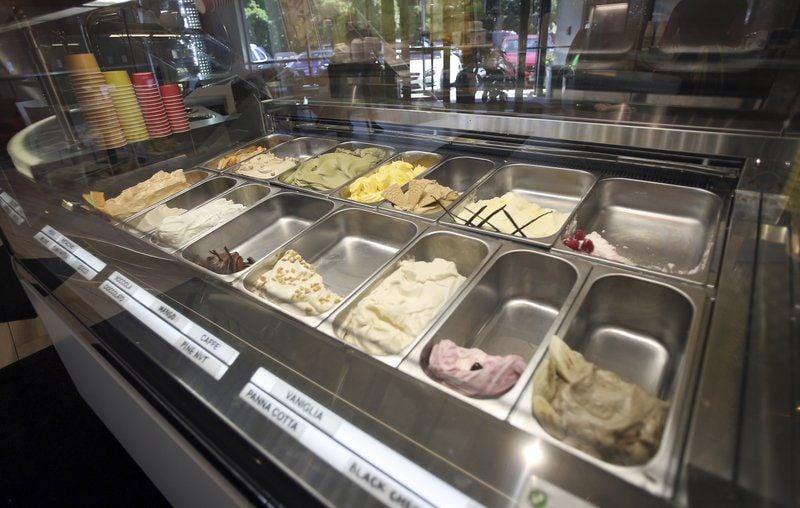 David Le/Staff photoRows of fresh gelato sit in a display case inside New Art of Gelato in Peabody. 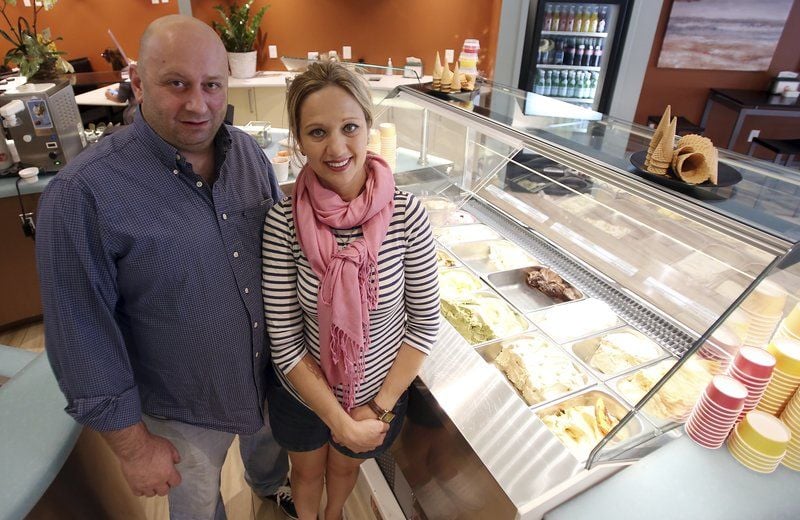 Tani and Anna Bleta, the owners of New Art of Gelato on Lowell Street in Peabody. 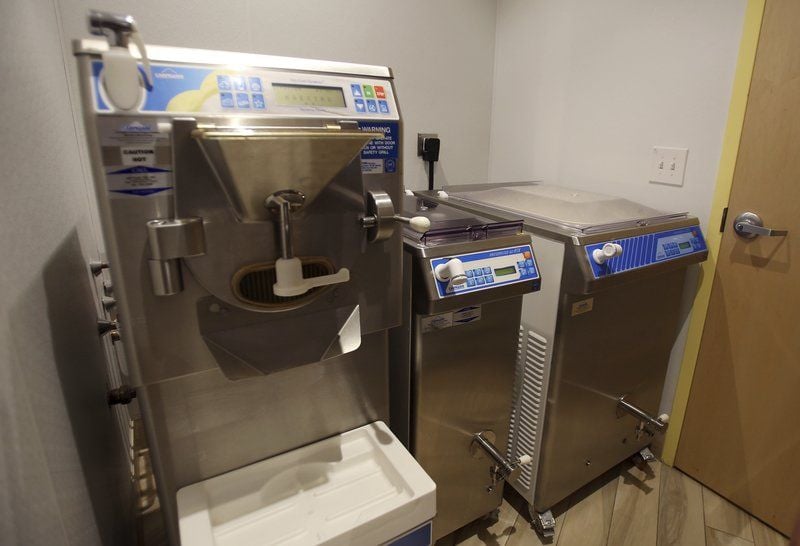 David Le/Staff photosGelato machines inside New Art of Gelato in Peabody were imported from Italy for the shop. 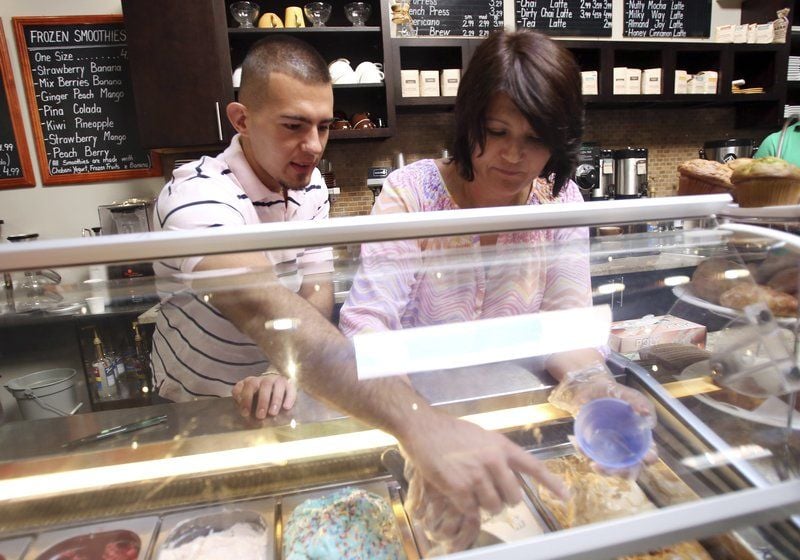 David Le/Staff photosAlbana Meta, right, owner of Gusto Cafe in Beverly, scoops a cup of gelato as her son Clay, who makes the gelato, points to the right combination of flavors. 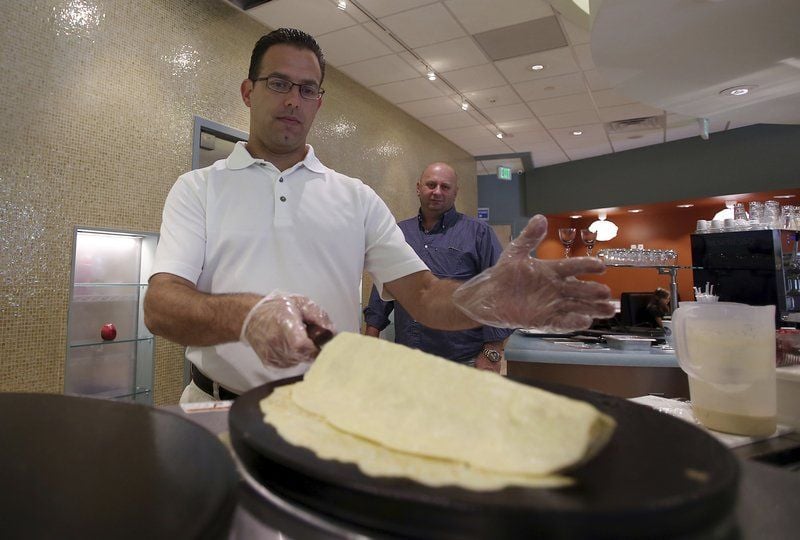 Albana Meta, right, owner of Gusto Cafe in Beverly, with her son Clay, who makes the gelato for the small downtown Beverly coffee shop.

David Le/Staff photoRows of fresh gelato sit in a display case inside New Art of Gelato in Peabody.

Tani and Anna Bleta, the owners of New Art of Gelato on Lowell Street in Peabody.

David Le/Staff photosGelato machines inside New Art of Gelato in Peabody were imported from Italy for the shop.

David Le/Staff photosAlbana Meta, right, owner of Gusto Cafe in Beverly, scoops a cup of gelato as her son Clay, who makes the gelato, points to the right combination of flavors.

Albana Meta, owner of Gusto Cafe at 280 Cabot St. in Beverly, sampled gelato at cafes in Milan, Verona, Senigallia and Riccione while on a tasting tour in Italy last month, but there’s one flavor in particular she really missed: the pistachio her husband, Julin, and son, Clay, make.

“I called him (her son, Clay) from Italy and said our pistachio is amazing,” Meta said.

Gusto has a gelato case with a selection of 14 flavors of the Italian ice cream. Meta, who is Albanian, lived in Italy and Greece before immigrating to the United States in 2001.

The Beverly cafe is not the only eatery on the North Shore trying to educate folks about the Italian treat amid a glut of frozen yogurt shops that have opened up in recent years. Some say gelato can be a hard sell because Americans don’t understand the difference between gelato and ice cream.

“It’s tough to try and sell your product and educate them at the same time,” said Alberto Beraldo of Peabody, the owner of Gelato Harbour Cafe in Danvers, which opened in 2011.

The store, which closed for renovations, plans to reopen in mid-September.

Beraldo said gelato, unlike ice cream, has no butterfat, which masks the flavor (and makes you thirsty when you eat it). Gelato has no sodium or high fructose corn syrup.

Sorbettos, or fruit gelatos, are made sweet from real fruit and contain no milk.

“I don’t want to offend yogurt,” said chef Tani Bleta, who recently opened up a traditional gelateria called the New Art of Gelato, 515 Lowell St. in Peabody in June, “but all corn syrup.”

His shop does not use artificial colors, thickeners or artificial preservatives, Bleta said.

“We use the natural in Italy,” he said.

About a month ago, Bleta and his wife, Anna, the owners of I Pazzi Italian restaurant on Maple Street in Danvers, opened the gelato shop and cafe just down the street from Bonker’s, in the same plaza that holds Home Decor Group. Their grand opening is Sept. 11.

From the outside, the store screams Italy, where gelato is treated with religious fervor given its 500-year history. There’s a shimmering art deco sign out front and a sweeping gelato bar inside.

The gelateria offers artisanal gelato, chocolate-covered treats, stick gelato, soft gelato and sorbettos made from fresh, whole fruit. The licorice comes from Calabria in the southeast of Italy, hazelnut from Piedmont, Italy, and pistachio from Bronte, Sicily.

There’s a running chocolate fountain, a towering Cattabriga Effe gelato machine the shop uses to make certain types of gelato, and a Carpigiani Maestro gelato machine, which Bleta said is the latest in gelato-making technology.

What’s the difference between ice cream and gelato? For one thing, because it can be stored at a higher temperature than ice cream, gelato won’t give you brain freeze when you eat it, Bleta said. Gelato has less air content than ice cream, and it’s low in fat.

“Gelato, the first thing is, uses fresh ingredients,” Bleta said. “On top of that, we use seasonal ingredients, and we make the really small batches, high quality and respect for the land.”

The Bletas come from Albania where they worked as educators but also worked in the service industry in the Italian Alps. Tani Bleta worked in the kitchen of the Club Hotel Alpino near Trentino, and Anna Bleta, a professor of history and geography in Albania, worked as a pastry chef at a well-known gelateria.

They started making gelato at I Pazzi last year. In scouting a location for the gelato cafe, they settled on Peabody because they felt the cafe would fill a niche in the city, which has a thriving food scene. Bleta said they got a warm welcome from Peabody Mayor Ted Bettencourt and staff at City Hall as they went through the permitting and inspection process.

Why do Italians love their gelato so much?

“Everybody in front of gelato is like a kid,” Bleta said. “They should sell it in a pharmacy; it’s a cure for sentiments for the pain.”

Back at Gusto Cafe, Meta said the gelato has proven popular with the downtown residents and students who frequent her cafe.

“This year, we did better in gelato than last year,” Meta said.

“I love to try their flavors. It’s all good,” said regular Katie DiSalvatore of Beverly.

“It’s like everything else; we take the time to do the perfect recipe,” Albana Meta says.

Her biggest problem: She only has room for 14 brightly-colored flavors, whereas gelato shops in Italy often have upward of 40. To solve this flavorful dilemma, she rotates flavors to give her customers’ palates a choice.