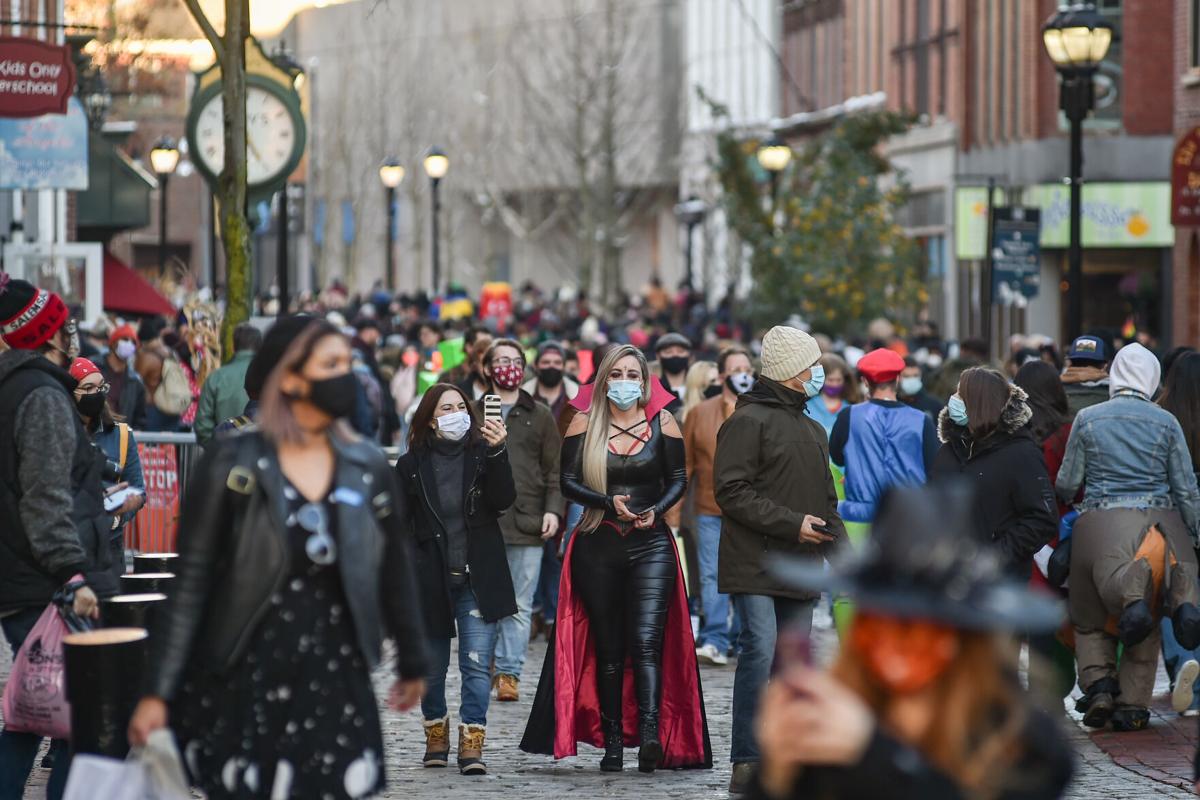 Scores of tourists, many in costume, walk along Essex Street in Salem on Halloween last year amid the coronavirus pandemic. 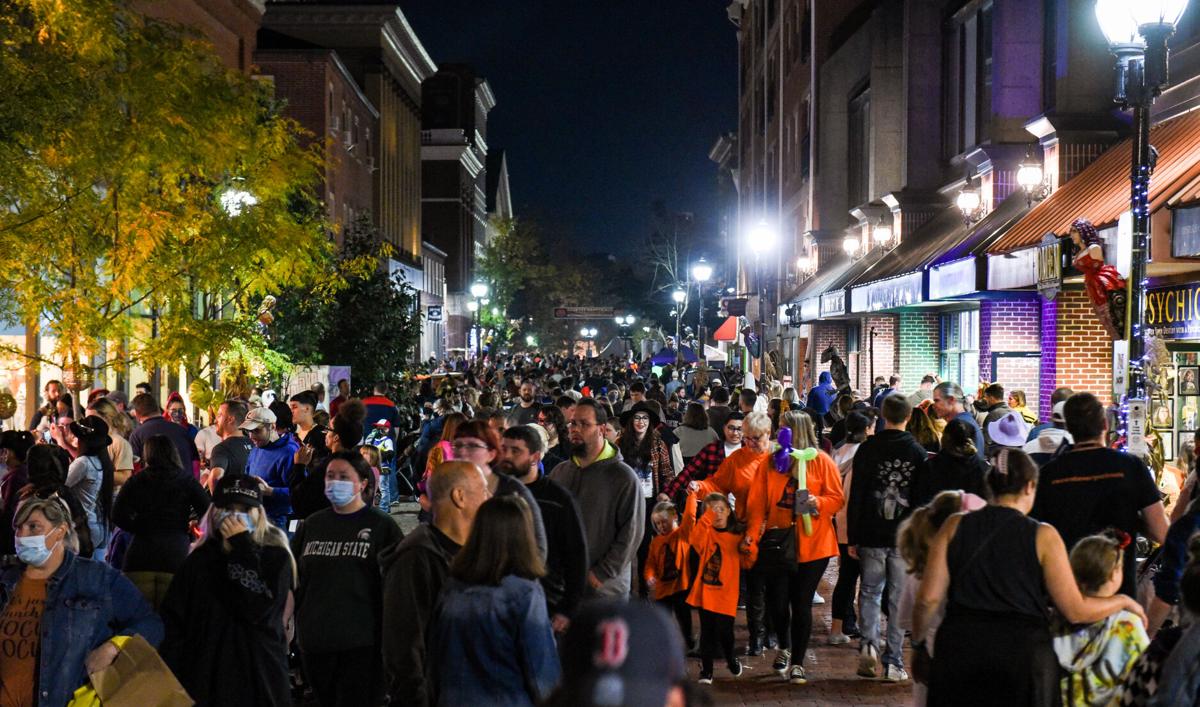 The ongoing pandemic doesn’t stop these large swaths of revelers from filling Essex Street during the 25th Annual Haunted Happenings parade in Salem on Oct. 7. 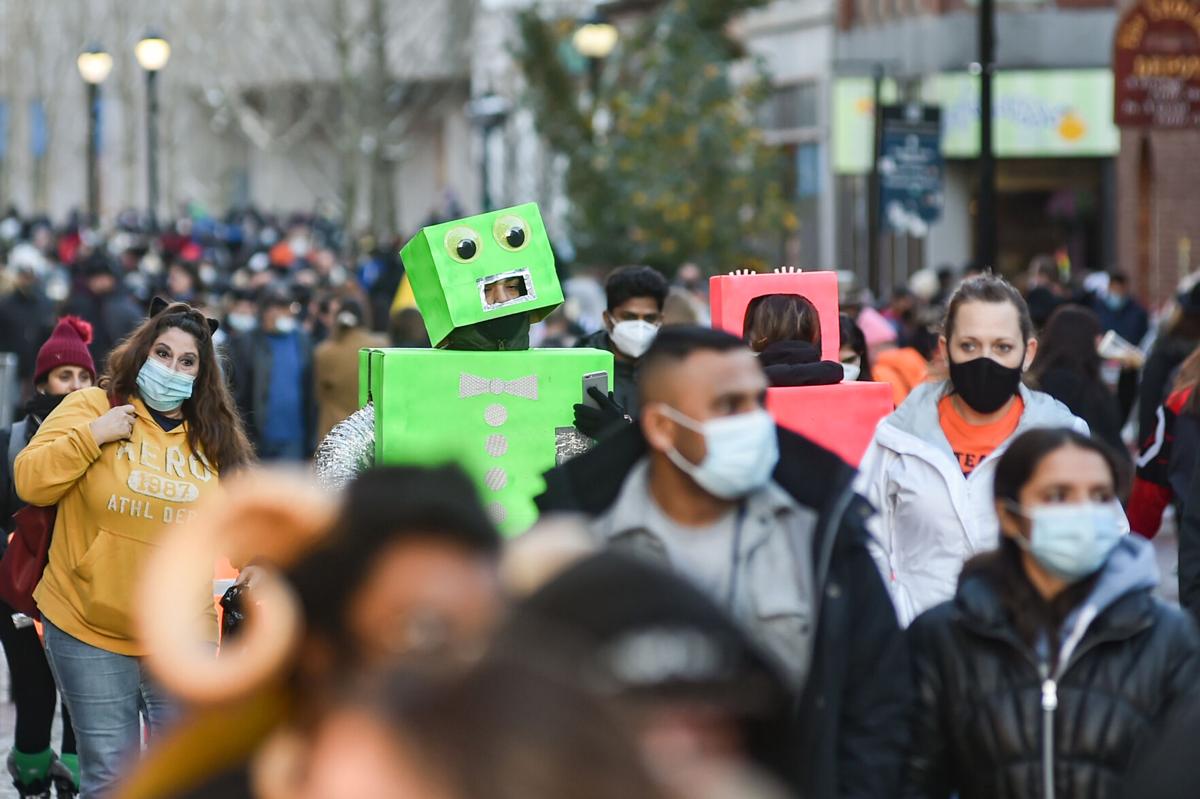 A large group of people walk along Essex Street in Salem on Halloween last year, despite pleas from city and state officials to stay home amid the ongoing pandemic. 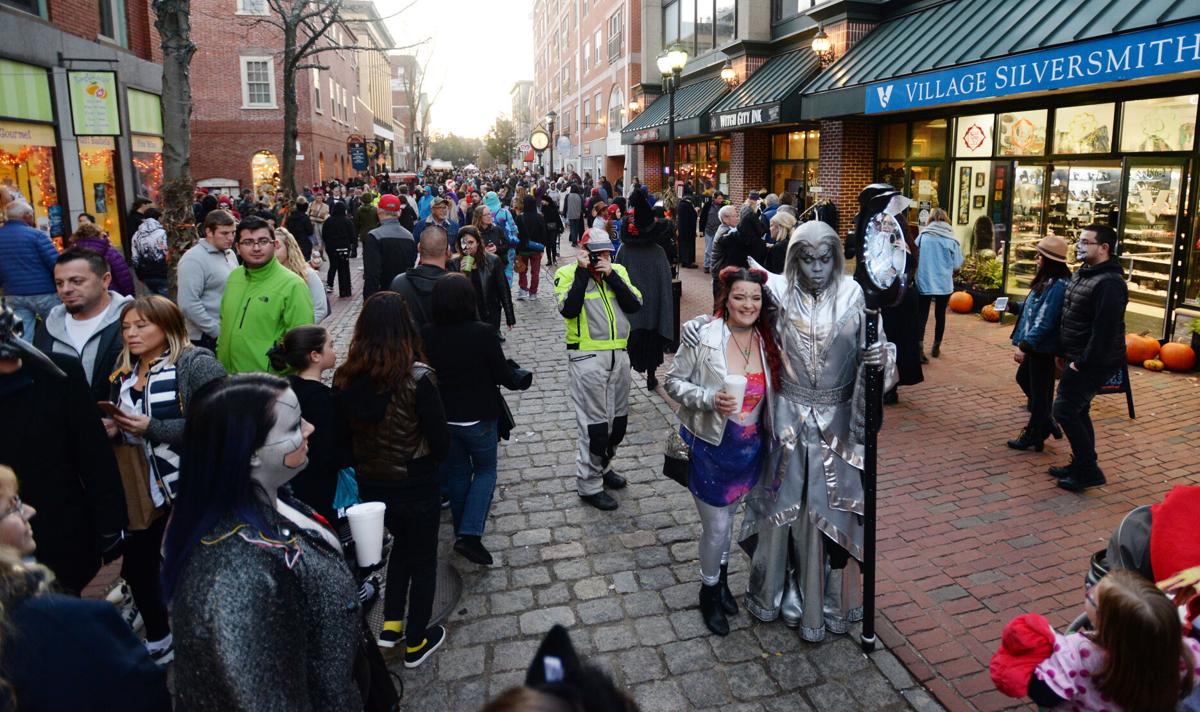 People pose with street performers as large crowds move along the Essex Street pedestrian mall in Salem during Halloween night in 2017.

Scores of tourists, many in costume, walk along Essex Street in Salem on Halloween last year amid the coronavirus pandemic.

The ongoing pandemic doesn’t stop these large swaths of revelers from filling Essex Street during the 25th Annual Haunted Happenings parade in Salem on Oct. 7.

A large group of people walk along Essex Street in Salem on Halloween last year, despite pleas from city and state officials to stay home amid the ongoing pandemic.

People pose with street performers as large crowds move along the Essex Street pedestrian mall in Salem during Halloween night in 2017.

SALEM — Halloween is back for its second tour amid the COVID-19 pandemic, a fact that’s hard to miss for anybody downtown in Salem.

“It feels normal again,” said Justin Bizjak, a Salem father cruising the Haunted Happenings parade when it took over downtown last week. As he spoke, tens of thousands of parade-watchers flowed along the stationary parade route. “We’re both still wearing masks here, but it’s the most normal we’re going to get this year.”

Gone are the days of city and state officials pleading with people to not visit Salem. Large-scale events are running indoors with negative COVID testing requirements in place, plans for shuttles downtown are coming online, and though the spread of the virus is again slowing down, the streets are full of people with unknown vaccination statuses coming from all over to visit the Witch City.

There’s a sense that Halloween will never be denied. That’s perhaps keenly felt by those running for City Councilor-at-large in this year’s city elections. The Salem News recently caught up with the candidates to ask how they feel Salem officials should handle the pandemic.

For Melissa Faulkner, a North Street resident, “this is Salem. This is what we do.” and it’s only a season that will pass easier if enjoyed.

The focus for a city councilor is on micromanaging the city’s image, according to Ty Hapworth, an incumbent councilor running for his second term at-large.

Hapworth evoked the image of the Charter Street Cemetery, which in previous years had more lax oversight and protections, and as such carried more of a picnic atmosphere than a place of reflection. At one point, it was just as likely to see a diaper being changed on a tomb as it was flowers being left on a grave.

“The first time people encounter Salem is during October, so what do they think? It’s just Mardi Gras? Or it’s a cool, historic city?” Hapworth said. “We have our vendors set up around here. Especially encouraging local vendors is important.”

That helps bring a family-friendly vibe to the culture, which is another step in keeping the crowds calm, according to incumbent councilor and retired police Capt. Conrad Prosniewski.

“Salem has changed. The face of Salem has changed since I was young. It’s now part of Salem’s identity,” Prosniewski said. “It’s geared toward family, fun, kids and good behavior, and as long as we stay focused on that, I think we’re OK.”

Alice Merkl, a Federal Street resident, said the idea of closing Salem to tourism “is not realistic. We know from last year.” Protecting the city came in the form of back-up plans and thinking out of the box, with one notable example being the inverted parade last week.

That’s because the pandemic is fluid, and a response that works one week may not work as well the next, she explained.

Residents must be “flexible, which we have been,” Merkl said. “If our Board of Health all of the sudden decides, ‘OK, outdoor masks,’ ‘OK, we need this here and try to relocate that...’ We go with Plan B, C, D, based on the science.”

With the crowds already here, Hillside Avenue resident Juana Fernandez said, the most critical thing for the season is that officials keep the public honest on health policy.

“It’s out of our control. Many people (are) in the city. It’s crazy,” Fernandez said. “The better thing is (to encourage the use of) masks.”

Domingo Dominguez, who is looking for a third term in November, said Halloween “has been addressed in the right way by this administration,” referring to Mayor Kim Driscoll, but “we have to be very careful. We have to make sure the decisions we make are the ones that save lives, aren’t the ones that’ll advance any political agenda.”

To that end, businesses have suffered and must be taken care of as equitably as possible, according to Dominguez.

“Local businesses are suffering, and we need to make sure we alleviate any type of situation so they can continue to move forward and can continue to make a living,” he said. “It’s almost been three years where they’ve been in COVID.”

Stacia Kraft, a last-minute entrant into the race after a health emergency sidelined a prior mayoral bid, also praised the city’s efforts, particularly those that helped keep the lights on in many struggling Salem businesses. That’s where the city’s focus must remain.

“A lot of them have done an amazing job staying alive, and the city helped them,” Kraft said. “We’ve done as good a job as probably we could have. Everybody can criticize them, and there’s a lot of things I might complain about... but all in all, it wasn’t easy.”