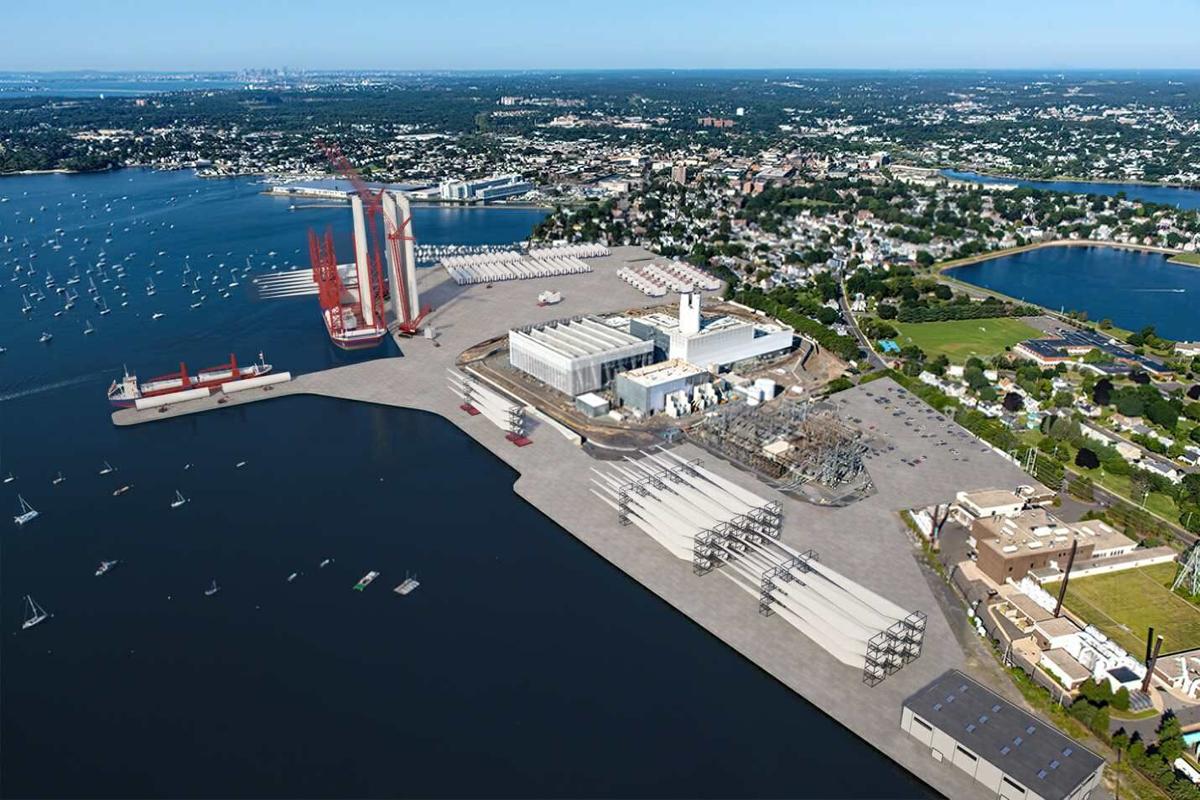 Salem Harbor Footprint’s surrounding 42 acres of undeveloped land would be transformed were it to become an offshore wind marshaling yard under the “Commonwealth Wind” project announced by city and energy industry leaders Thursday morning. It’s one of two bids competing to build offshore wind by Martha’s Vineyard. 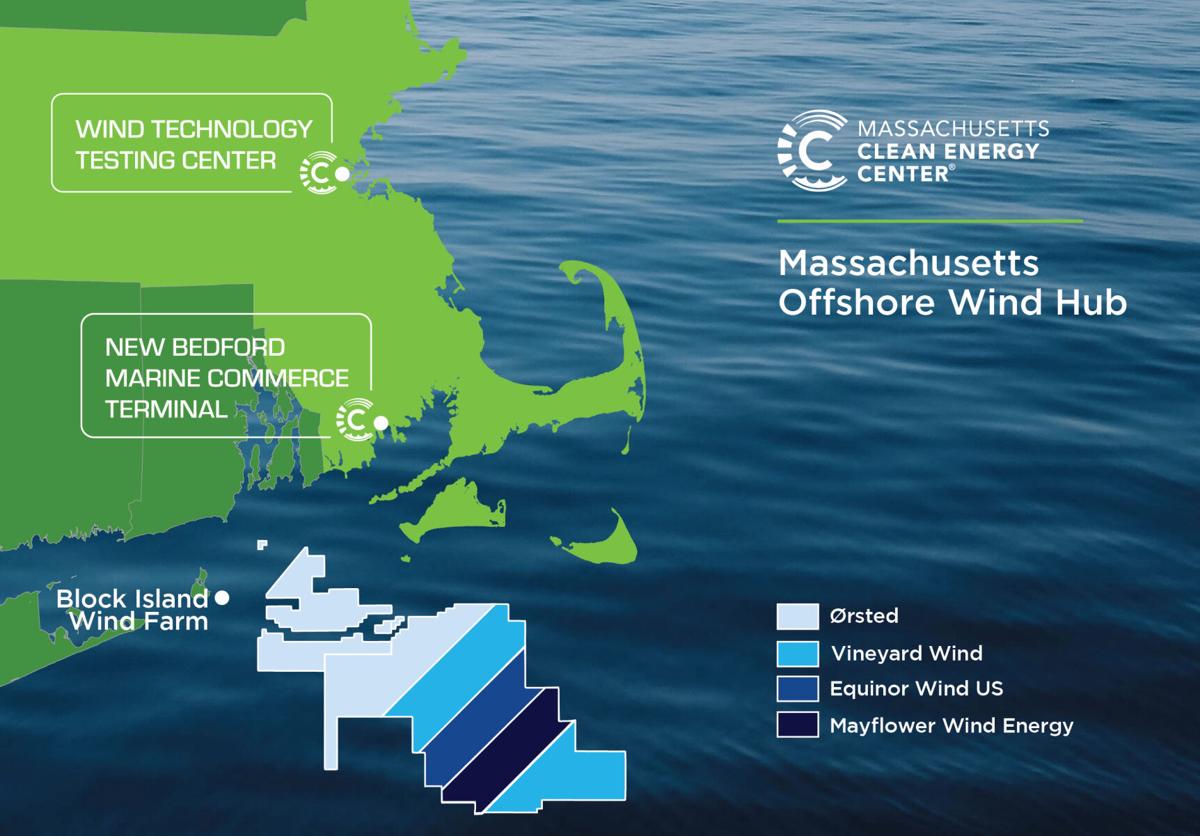 Salem Harbor Footprint’s surrounding 42 acres of undeveloped land would be transformed were it to become an offshore wind marshaling yard under the “Commonwealth Wind” project announced by city and energy industry leaders Thursday morning. It’s one of two bids competing to build offshore wind by Martha’s Vineyard.

The competitor in Salem’s quest to build offshore wind turbines is a firm believer that both proposals in front of the state not only should, but eventually must, get approval in order to meet Massachusetts’ renewable energy goals.

Two sets of power companies and current or prospective landowners recently bid as part of the state’s third offshore wind energy “procurement” to build, set up and maintain an offshore wind farm by Martha’s Vineyard.

The bidders include Mayflower Wind, which is pitching a maintenance facility in Fall River as part of its proposal, and Commonwealth Wind, which targets 42 acres of undeveloped land around Salem Harbor Footprint for a marshaling yard, a facility where the turbines would be built and shipped out to an offshore wind farm miles off the coast.

Vineyard Wind, a major player in the Commonwealth proposal, and Mayflower were both awarded long-term contracts to build an offshore wind farm in the state’s first two procurement rounds, said Seth Kaplan, director of external affairs for Mayflower. Only one of these two new proposals can move forward in this third round, but it’s understood that both are necessary to keep the state’s energy goals realistic, he explained.

“The utilities — Eversource, National Grid, Unitil — are working together under the supervision of the state to periodically do these procurements, where they have the developers offer long-term contracts for offshore wind,” Kaplan said. “The administration is very clear that these offshore wind projects that are procured through this process are absolutely essential to meeting the state’s climate and clean energy goals... Not that places like Fall River and Salem aren’t important, but these (procurements) are much bigger than these places.”

Both companies have either current or future leases tying up the new New Bedford Marine Commerce Terminal. Advocates for offshore wind have continuously pointed to New Bedford as already being overloaded with work. That’s why a new port — like what’s proposed in Salem — would lead to an offshore wind boom not just in Massachusetts but the entire Eastern Seaboard and Gulf of Maine, many have argued.

“New York, for example, is actively developing ports and reactivating places in Brooklyn that haven’t been active ports since World War II basically,” Kaplan said. “The bottom line — and this brings us to where we are — is as this industry develops, there will be a real need for multiple construction facilities.”

While the Commonwealth proposal would transform Salem, Mayflower would transform a port in Fall River with the construction of a new “O&M” port facility, which would provide operational and maintenance support to wind farms once they’re connected to the grid, Kaplan explained. It’s planning to use New Bedford to build the turbines, the port in Fall River to maintain them, and a connection to the grid would be established in Somerset “across the river from Fall River,” he said.

The Commonwealth proposal would introduce Crowley Maritime Corporation and its New England-based subsidiary (Crowley Wind Services) as the buyers of all 42 undeveloped acres around Footprint. With Crowley serving as the long-term port operator, Vineyard’s partners would serve as the port’s anchor tenants.

“Massachusetts was home to the first offshore wind port, and we’re very proud today to announce that we’d be looking to build the second offshore wind port right here,” said Lars Pedersen, CEO of Vineyard, last week. “If you’re in the maritime construction industry, you need ports — and the U.S. offshore wind industry is growing at such a pace that we’re short of ports. We need more ports.”

While Vineyard picked up the state’s first procurement, and Mayflower the second, there are still two other sets of players in Massachusetts who declined to bid in the third procurement, according to Kaplan.

Kaplan also argued that the proposal targeting Salem would itself be a major boost for the industry — even if it comes at the expense of Mayflower’s success.

“Our sponsor companies are very involved in floating (turbines) elsewhere in the world. Like everyone else, we understand that floating is a great future possibility,” Kaplan said. “Salem has a lot of potential as a port that could support a construction deployment of floating offshore wind. Crowley is doing something very smart, and to the benefit of the city of Salem and to the industry.”