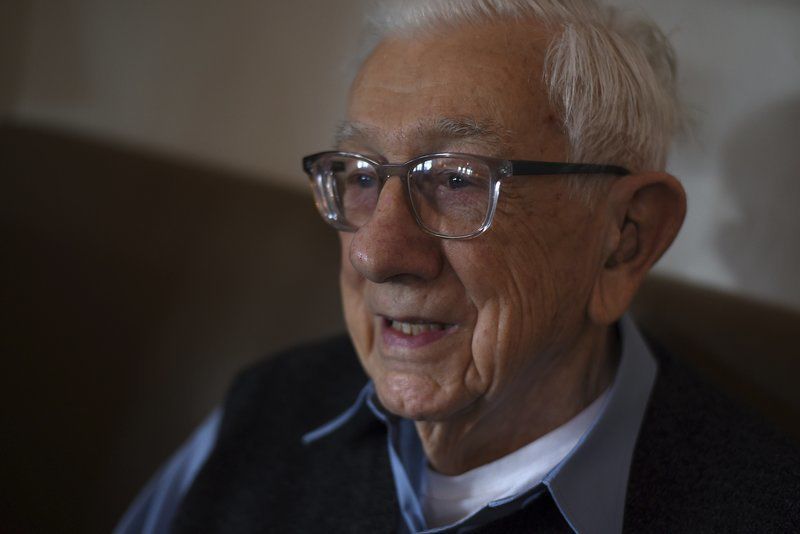 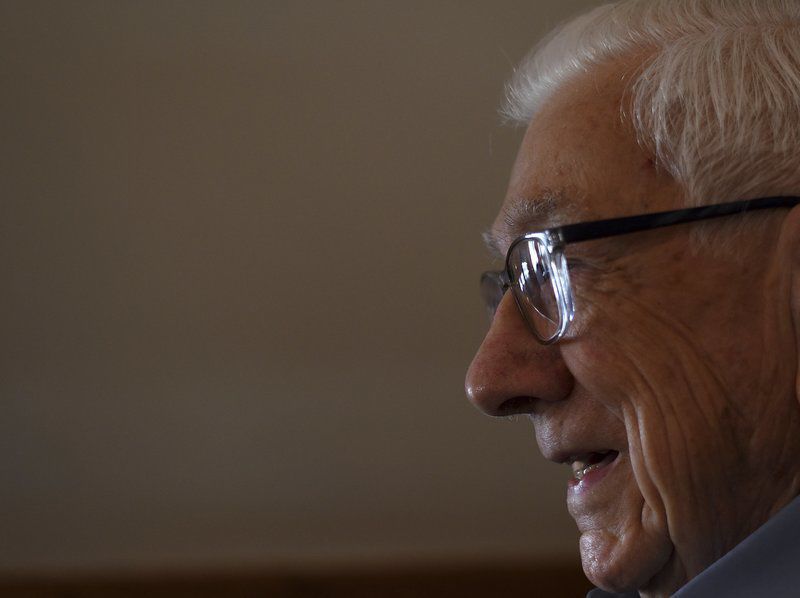 PAUL BILODEAU/Staff photo. Veteran Michael Linquata talks about his time as an Army medic during the Battle of the Bulge, a turning point in World War II, 75 years later. 1/8/20 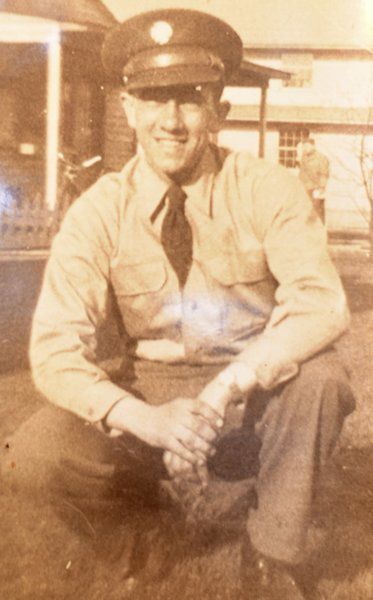 A undated photo of World War II veteran Michael Linquata, which hangs in The Gloucester House Restaurant. Linquata was an Army medic at the Battle of the Bulge 75 years ago. 1/8/20 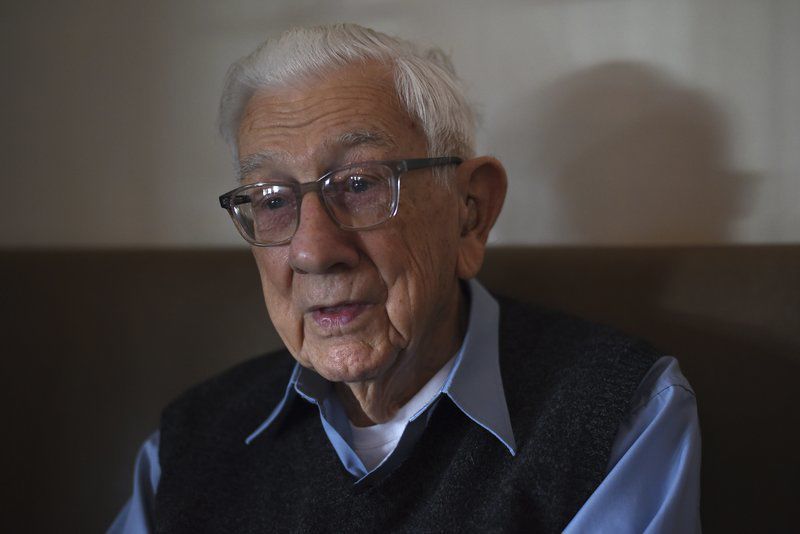 PAUL BILODEAU/Staff photo. Veteran Michael Linquata talks about his time as an Army medic during the Battle of the Bulge, a turning point in World War II, 75 years later. 1/8/20

A undated photo of World War II veteran Michael Linquata, which hangs in The Gloucester House Restaurant. Linquata was an Army medic at the Battle of the Bulge 75 years ago. 1/8/20

When Michael Linquata, a U.S. Army medic fresh out of Gloucester High School, arrived at a World War II battalion aid station on the fields of Belgium, the man issuing equipment to arriving U.S. troops greeted him with a chilling forecast that went beyond the brutal, wintry weather.

"'You have 15 days to live,' he told me," Linquata recalls now. "Here I am 19 years old and hearing that. I guess that was the average for the men who were coming through at the time. But I thought it was a bunch of bull. I guess it just wouldn't be my time to go."

It was 75 years ago this month that Linquata and many others confronted those odds in what came to be known as the Battle of the Bulge.

Waged from Dec. 16, 1944, through Jan. 25, 1945 in the Ardennes region of eastern Belgium -- and extending eastward into Luxembourg and ultimately Germany -- the Battle of the Bulge marked Germany's final western offensive of the war. It proved to be the equivalent of Hitler's last stand before the Third Reich unconditional surrendered on May 18, 1945.

That ending did not come until an estimated 75,000 U.S. troops and between 80,000 and 100,000 German soldiers had lost their lives in what, following the Normandy invasion, proved to be the final turning point of the war. And it did not come until Linquata, now 94 and essentially patriarch of the family that has run The Gloucester House restaurant for more than 60 years in America's Oldest Seaport, had trudged miles through persistent sub-freezing temperatures, nearly 2 feet of snow, then endured three months as a German prisoner of war.

"Mike is one of the most influential people for me in terms of coping with some of the things that happened," says Adam Curcuru, Gloucester and Cape Ann's director of veterans services. "(The Battle of the Bulge) really was the pinnacle toward victory in Europe, yet he's so humble and took the lessons he learned there to turn into positives and helping others. He's a true inspiration."

Linquata, who graduated from the then-new Gloucester High School in 1944, tried to enlist in the Navy but was turned down because he was colorblind. When he tried to get into the Army, he got help from a Gloucester friend who tipped him off to the answers to a colored lights test. Then he was whisked off to Europe aboard the Queen Mary, where one of his fellow passengers was British Prime Minister Winston Churchill.

"He had a lot better accommodations than we did," Linquata says with a laugh. "But we did see him, and he gave us all the 'V' for victory sign when we were getting off.

Dispatched to the northern France city of Le Havre, Linquata was then shuttled to Belgium and the front as member of the Army's 134th Combat Infantry.

The thing he remembers most?

"Cold.  It was so cold," he says now, adding that he turned down a chance to return to the Bulge battlegrounds this year because of the weather.

Once at the front, he first served as part of a crew working at a makeshift hospital set up in a Belgian garage.

"They could be anywhere -- in a farmhouse, a barn, a garage, anywhere," he says of Army stations.

As a medic, Linquata did not carry arms, and never had any training with weapons. Yet he was accompanying an advancing battalion that came under intense German mortar fire one day in a skirmish that left several Americans dead and 20 more wounded.

Scrambling to treat the wounded in the icy and snowy countryside, he called for an ambulance, but none could hear the call. He then took a poll of the troops, who agreed to turn themselves in (to their German pursuers) if it meant getting needed help for their colleagues.

He set out to seek help, and -- reaching a clearing -- was surprised to come upon two German tanks, their cannons pointed squarely at him.

"I had my hands over my helmet, and I had the red cross symbol on my helmet and on my sleeves, so they knew I was a medic. I wasn't threatening them," he recounts. Bridging a clear language barrier, Linquata used a makeshift sign language to convey that there were 20 men wounded nearby, and the Germans provided them the help they needed. With that, however, Linquata became a prisoner of war. He would be held at a nearby camp called Bad Orb -- or Stalag XB -- for more than three months before Army troops liberated him and others in the war's final days.

Linquata would hear later that roughly half of the prisoners taken by Germany were to be executed. He also said that some prisoners were beaten -- "that happened to anyone who did something wrong," he says, adding that, despite being interrogated once, he never met that fate, either.

Conditions, however, were grim. Prisoners had no beds, electricity or running water; they were granted heat for just two hours a day. Camp quarters were infested with lice.

"They were biting us day and night. You could feel it," he recalls.

The camp was also grossly short of food. An estimated 300 men at the camp died of starvation, he said. But Linquata endured; by the time he was freed, he had lost nearly half his body weight, dropping from 155 to about 85 pounds.

"When the Army came to pick us up, they transported us out in truckloads to a makeshift base maybe 20 miles away -- with good, heating systems and the chance for hot showers," he recalls.  "We felt like we were in heaven."

He returned first to Le Havre, then back to the U.S. and Gloucester. He was awarded four Bronze Stars, the French Legion of Honor and a Presidential Unit Citation for his service.

Linquata would go on to marry the former Lillian Ciulla, now 88, to whom he's been wed for 68 years. The couple had four children, including Lenny Linquata, who continues to run The Gloucester House off Rogers Street. Michael would go on to advocate for veterans on a wide range of issues, and has long been the driving force behind Gloucester's World War II Memorial at Kent Circle.

"In a way, I know I've had a blessed life," he says. "The war is something you can never forget, but I know I just had God and the angels looking after me.

"I really can't complain," he says. "I always thought that's a useless thing to do."