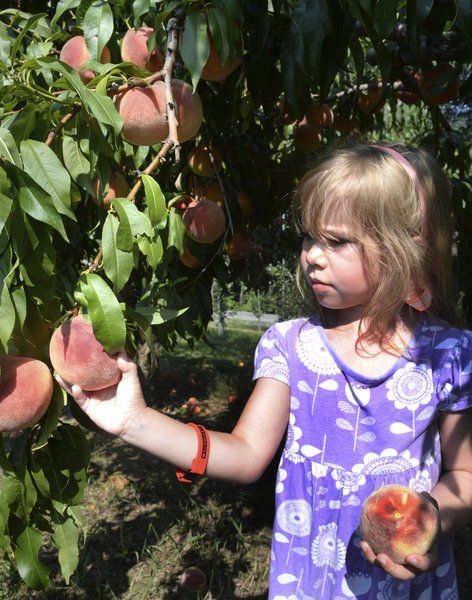 BRYAN EATON/Staff photo. Libby Knapp, 5, of Newburyport took the trek up the hill at Cider Hill Farm last year for a bumper crop of peaches. This year should bear none of the fruit as weather patterns in February killed the buds. 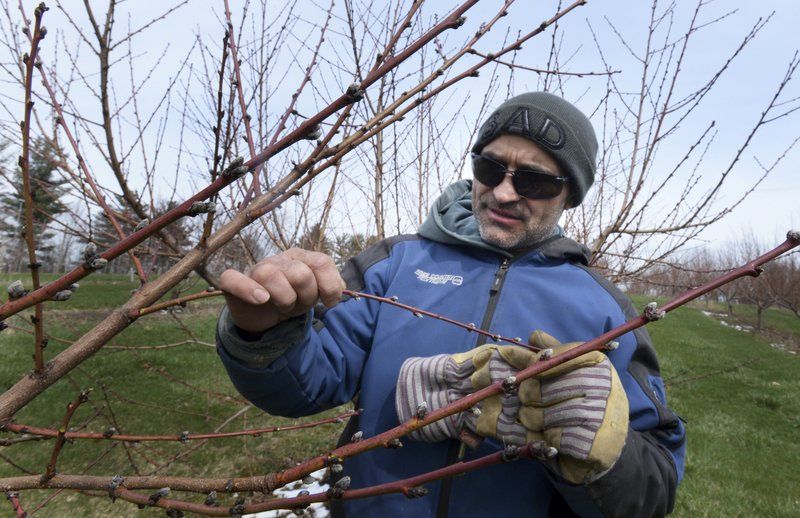 BRYAN EATON/Staff photo. Grigore Chitas of Cider Hill Farm stands among peach trees that will bear no fruit this season. Warm days in February caused the buds to become active, then extreme cold killed them.

BRYAN EATON/Staff photo. Libby Knapp, 5, of Newburyport took the trek up the hill at Cider Hill Farm last year for a bumper crop of peaches. This year should bear none of the fruit as weather patterns in February killed the buds.

BRYAN EATON/Staff photo. Grigore Chitas of Cider Hill Farm stands among peach trees that will bear no fruit this season. Warm days in February caused the buds to become active, then extreme cold killed them.

AMESBURY — The see-saw nature of the past winter and spring have taken a toll at Cider Hill Farm, where co-owner Glenn Cook said he has lost his peach crop.

“That’s how it looks to me,” Cook said.  “We’re already counting on a total loss.”

Cider Hill isn’t alone. Farmers throughout the region are reporting their peach crops have been destroyed by the fluky weather.

Peaches account for Cider Hill’s number two crop, and Cook believes it was the weekend of Feb. 12-14 — which saw nighttime temperatures dip at or below zero for three straight evenings after having been over 60 degrees less than two-weeks-before — killing off his farm’s stone fruits, (peaches, plums and nectarines.)

“The deal is, in a regular winter, these flower buds, not the trees just the flower buds, they could take, 13- to 14-below-zero wholly dormant,” Cook said. “But we went into a cold weekend having had 65 degrees about ten days earlier. The peach trees come out of dormancy very easily. They are easily tricked by warm periods. That makes them even more vulnerable. I have a feeling we lost the flower buds way before 14-below-zero, which is why there is such a total kill, even south of us.”

Peaches tend to be lost more to frost, said Cook, who added that Cider Hill Farm came close to losing its peach crop roughly nine years ago as well.

“We have seen a lot of fluctuations,” he said. “Global warming, global cooling, El Nino, El Nina, they all contribute. But it is just bad luck.”

Farming is of course a risky business, and Cook estimates losing the peach crop would account for about 10 percent of Cider Hill’s business. The Fern Avenue farm, however, known for its apple cider and apple cider doughnuts, might be in more serious danger.

“We can survive a peach loss. The apples are the next part of the story that may be getting scary for some,” Cook said. “The growth stage of the apples right now, there are charts that tell us how cold they can take it at the different stages without having a ten percent kill of flower buds or 90 percent or a total kill. Last night and the night before, we were right on that line.”

Losing the peach crop could mean the farm may have to scale back on improvements, Cook said. Losing any significant portion of the farm’s apple crop could be extremely serious.

“If Cider Hill Farm were to lose its apple crop and its peach crop, then we would have some big management decisions to make, just to get through the year,” he said, but added that “next year could be a booming crop and we could recover.”

So far, he said, the apple crop should be fine as well as the strawberries, raspberries and blueberries.

“If there is cold, sometimes praying is the only thing that we can do,” Cook said. “Sometimes God has a sense of humor and he wants to test us to see what we would do.”

North Andover’s Smolak Farms owner Michael Smolak also serves on the agricultural board at the Department of Agricultural Resources, and the Farm Service Agency, a branch of the USDA and said simply, “There are no peaches north of Rhode Island.”

The Department of Agriculture can offer some assistance to farmers in cases of crop disaster, said Smolak. Farmers can also obtain crop insurance, and receive money to help lessen the blow.

“So we might get enough to cover expenses, if we’re lucky,” he said, “but it certainly doesn’t make us whole.”

Even if there’s no crop, farmers still have to make the orchard ready for future seasons, Smolak said, adding that he plans on using this year as a restructuring period for the peach crops, making heavier cuts in the trees. Farmers generally cut away about half of the current season’s growth annually, to allow for regrowth.

Smolak attributes climate change to this year’s crop destruction. In the past, he said, area farmers would lose a peach crop only once every five years, but since April’s have been growing colder, anything that buds early is affected.

“This winter has just been strange with temperature variations,” Smolak said. “One thing that might have happened is, they didn’t go into dormancy in normal fashion.”

Smolak said his apple orchards look good, and even some of his hardier summer fruits like plums are doing alright, but they are far from out of the woods.

“When people ask, ‘How’s your crop?’ we all say we don’t know until the money’s in the bank at the end of the season,” Smolak said. “It could be wind, hurricanes, could be anything. We remain optimistic, we’re lucky we have what we have, and we hope everything else will produce just fine.”