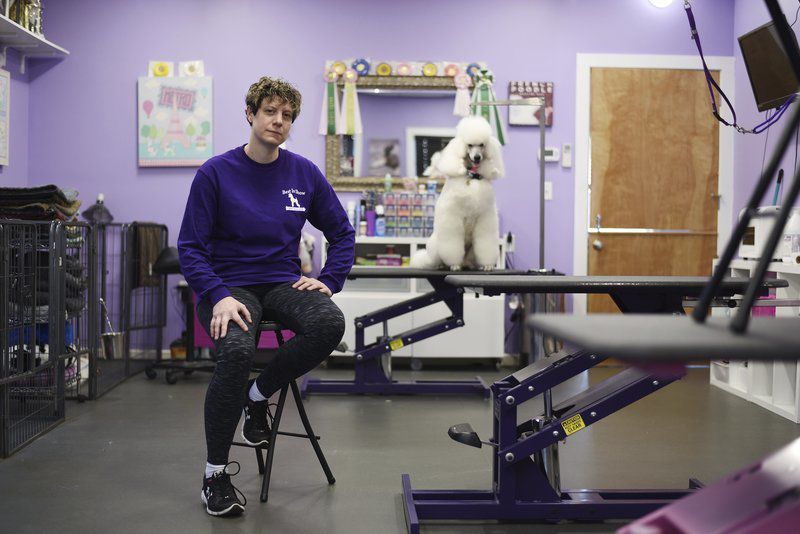 PAUL BILODEAU/Staff photosPet groomer Julie Wilkins and her poodle Bubbles, at her shop, Best in Show in Magnolia, which has been closed due to COVID-19. 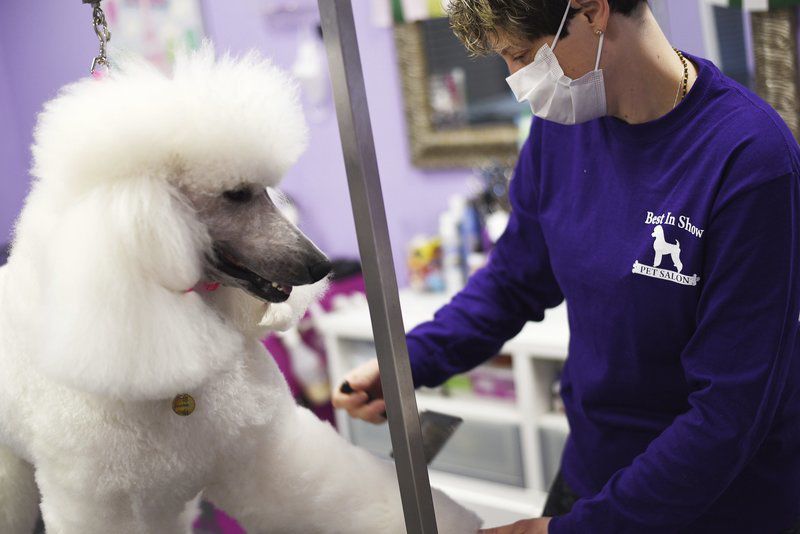 Pet groomer Julie Wilkins grooms her own dog, Bubbles, a 3-year-old standard poodle, at her shop. 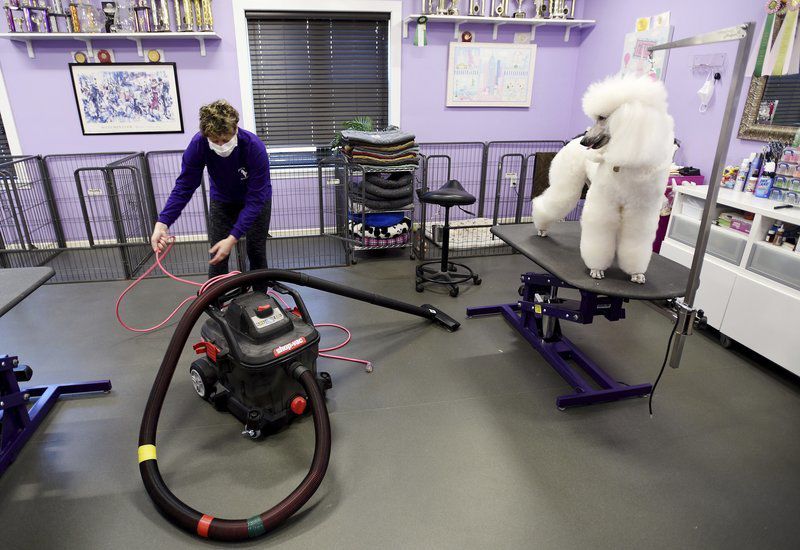 PAUL BILODEAU/Staff photoPet groomer Julie Wilkins cleans up with a shop vacuum while her own dog, Bubbles, a 3-year-old standard poodle, looks on. Her shop, Best in Show in Magnolia, has been closed due to COVID-19.

PAUL BILODEAU/Staff photosPet groomer Julie Wilkins and her poodle Bubbles, at her shop, Best in Show in Magnolia, which has been closed due to COVID-19.

Pet groomer Julie Wilkins grooms her own dog, Bubbles, a 3-year-old standard poodle, at her shop.

PAUL BILODEAU/Staff photoPet groomer Julie Wilkins cleans up with a shop vacuum while her own dog, Bubbles, a 3-year-old standard poodle, looks on. Her shop, Best in Show in Magnolia, has been closed due to COVID-19.

GLOUCESTER — Clipped by the novel coronavirus pandemic, dog groomers are fighting for why their line of work matters now more than ever.

All pet grooming establishments, whether brick-or-mortar, or mobile, are not considered essential services during the coronavirus pandemic and cannot operate under any conditions, according to an advisory sent last week by the state Department of Public Health.

Gloucester’s Health Department had been allowing groomers to operate with requirements for pick-up, drop-off, social distancing and sanitation during the pandemic. Since the new advisory came out last week, however, its regulations have changed to align with those of the state.

“We just sent a memo to the known grooming businesses in the city to update them and they should (have received) them by Monday,” wrote Max Schenk, the Health Department’s assistant director.

For Julie Wilkins, the fight to do meaningful work means driving more than an hour to a salon in a different state to groom canines in desperate need of care.

“And they will make the drive if they have to,” said the owner of Best in Show Pet Salon on Lexington Avenue, adding that a few of her clients have followed her to New Hampshire.

Prior to the new regulations set by the state and local administration, other local groomers were getting creative in the ways they were caring for canines.

“I meet them somewhere and bring their dogs to the shop and then return them,” King explained. “It is very stressful to say the least.”

Robyn McNair of Robyn’s Dog Grooming has been doing tutorials on Facebook to give owners some type of guidance.

But for her, going virtual is not enough. The inability to work means health risks for beloved canines.

“The dogs are a mess,” McNair said.

The local and state health departments have stated that animals requiring grooming due to medical conditions must go to their veterinarians under the new emergency order.

Based on her own experience, King doesn’t see clients wanting to go to the medical professionals.

“We see their dogs every three weeks. The vet sees them twice a year,” King said. “They don’t want to call their vet because they think their question might be dumb. We have a relationship with them.”

The time elapsed since Gov. Charlie Baker’s order has been weighing on groomers as well.

“I am not working and it has been very difficult,” McNair said, explaining that she has filed for unemployment and had yet to receive the stimulus check.

While local groomers are eager to get back to work as soon as possible, the city is notifying each establishment that it will have to wait a while longer.

“If, after being notified, it is discovered that they continue to operate, we will respond on a case-by-case basis and if necessary, issue fines and penalties as allowed by state and local regulations,” Schenk explained.

In the meantime, groomers have been writing letters to government officials such as Gov. Charlie Baker, state Rep. Brad Hill, R-Ipswich, and state Senate Minority Leader Bruce Tarr, R-Gloucester, to raise awareness for why they should be allowed to reopen.

“They will open up golf courses, but won’t allow the care of their beloved pets,” Wilkins exclaimed.