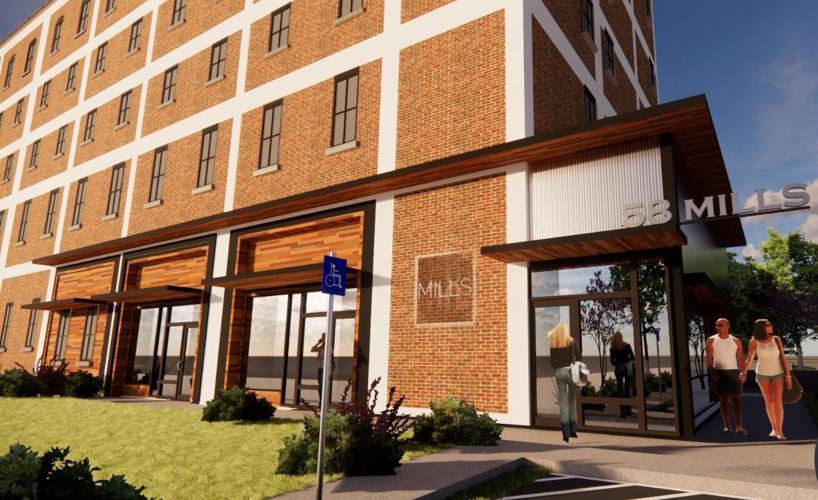 A rendering of a renovated Building A at 58 Pulaski St. in Peabody, which is a part of the 58 Mills development at the site. The former mill building currently houses commercial businesses, but could hold 45 units in the future. 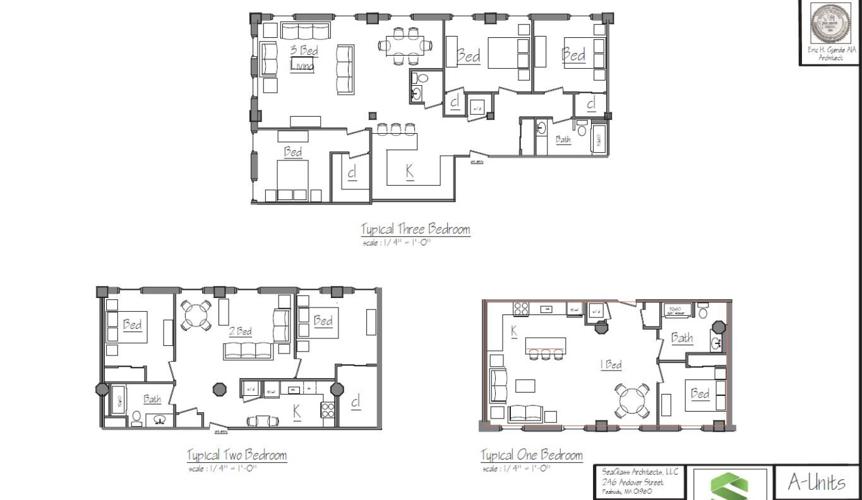 The floor plans of three types of residential units that are proposed for Building A at Mills 58 on Pulaski Street in Peabody. The 45 units would all count toward the city's affordable housing index, according to a plan submitted to the city by developers. 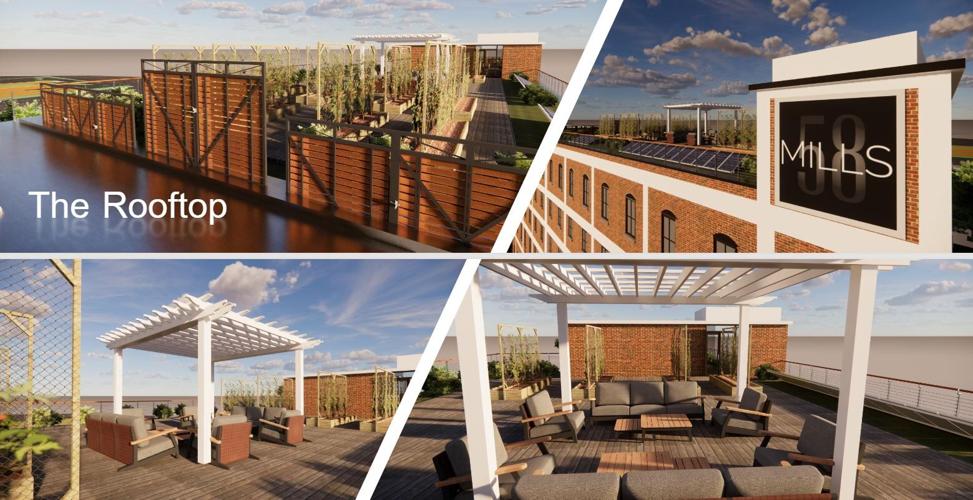 A proposed roof top lounge on Building A at Mills 58 on Pulaski Street in Peabody. Developers plan to renovate the old mill building to include 45 residential units. 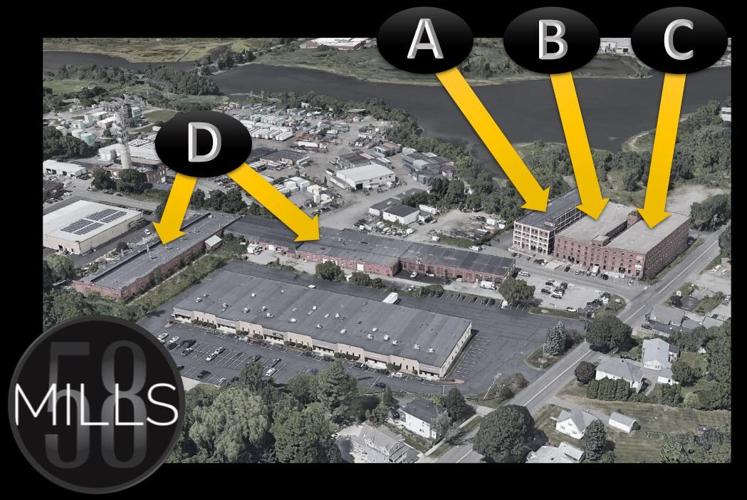 The four buildings that are a part of Mills 58 on Pulaski Street in Peabody. Developers plan to build 45 residential units that will count toward the city’s affordable housing index in Building A, and are before the City Council with a request to extend the area’s mill overlay district to include Building D.

A rendering of a renovated Building A at 58 Pulaski St. in Peabody, which is a part of the 58 Mills development at the site. The former mill building currently houses commercial businesses, but could hold 45 units in the future.

The floor plans of three types of residential units that are proposed for Building A at Mills 58 on Pulaski Street in Peabody. The 45 units would all count toward the city's affordable housing index, according to a plan submitted to the city by developers.

A proposed roof top lounge on Building A at Mills 58 on Pulaski Street in Peabody. Developers plan to renovate the old mill building to include 45 residential units.

The four buildings that are a part of Mills 58 on Pulaski Street in Peabody. Developers plan to build 45 residential units that will count toward the city’s affordable housing index in Building A, and are before the City Council with a request to extend the area’s mill overlay district to include Building D.

PEABODY — Developers are planning to add affordable housing to Mills 58 on Pulaski Street and also separately requesting that the city expand the area’s mill overlay district to encompass another building at the site.

The proposed 45 housing units would be built in Building A of Mills 58, which is owned by developer Ed Greeley. There would 20 one-bedroom units, 20 with two bedrooms and five with three bedrooms. A parking lot of about 100 spaces would be available to tenants.

The housing, proposed under the state’s Chapter 40B program, would be a mix of market rate and affordable units for residents earning below 80% of the area median income, according to plans on file with the Zoning Board of Appeals. All 45 units would count toward the city’s affordable housing index.

A day care and other amenities for the building would operate on its first floor. Existing rooftop areas will have solar panels and a green roof deck, according to the proposal.

This is a second attempt at housing for the site. That use was ultimately removed from the proposal to create the zoning overlay district a few years ago after councilors raised concerns.

About 20% of the building is occupied by commercial businesses, said Julie Daigle, project manager for Mills 58 and who is also a city councilor. The businesses operating there now will be able to move into one of Mills 58’s other buildings once construction begins, and are under short-term leases.

“We’ve tried to reach out and put together a really good plan that should appease the business community, the neighborhood, the city, and we think it’s a great project that revitalizes a former mill building,” Daigle said.

Construction would take between 18 months and two years, she said. There is no set cost for the project yet.

The state has already green-lit the project to seek local permits, and Greeley’s team hopes the Peabody ZBA will vote in favor of the new housing after examining the site’s peer review studies over its next few meetings, Daigle said.

Attorney Bill Sheehan, meanwhile, spoke at multiple public meetings about the project this month on behalf of VRMM LLC. and Sideways LLC, which are separate of Greeley’s housing plan. Both businesses operate inside the Pulaski industrial site and Mills 58.

“If there are residents who move into (Building A), they’ll be overlooking a use that they may not like and unfortunately the law doesn’t necessarily protect my client in the event that residents seek to either eliminate or change how we’re using our property,” Sheehan said at Monday’s ZBA meeting.

Sheehan said he submitted a legal covenant to Greeley’s lawyer on Friday that would protect his clients from being sued by Mills 58 over industrial land use next to a residential complex.

Daigle said she sees the residential building and businesses on the site “coexisting.”

“We’ll be very transparent...as people are looking at moving into an apartment, just like when we show them office space, that there are commercial and industrial businesses over here,” Daigle said. “It’s like if you move into the North End, you know that there’s going to be restaurants open and music at night. It’s the same thing for an industrial park. They have to acknowledge that it’s not going to be all houses.”

Community Development director Curt Bellavance said at a July 7 Planning Board meeting that the original housing proposal in 2019 was stricken from the overlay because city councilors wanted to start off with a smaller overlay district on the site, since it was the first of its kind in Peabody.

The overlay district was then adopted by the council to grant different commercial businesses an easier path to opening in the former mill buildings, instead of having to seek special permits from the council. The property is otherwise zoned for industrial use and limited commercial uses.

On July 7, the Planning Board voted to recommend the overlay district expand to include a former mill building (Building D) that is adjacent to the current overlay zone and directly across the street from the Roadhouse Pub.

The expansion would allow a more diverse range of businesses to open up shop on the property, which has been the case in the current overlay district, Bellavance said.

“The mills on Pulaski Street have had quite a conversion from what it was about four or five years ago,” he said. “It’s a very lively place with opportunities to eat, there’s a day care, there are photography studios, a brewery and such, which is exactly what we wanted to see happen in regards to the new uses of (old mills).”

The City Council voted last Thursday to continue the hearing on the overlay expansion to its Aug. 25 meeting to give city officials more time to determine if the expansion should include additional parcels of land, as proposed by Sheehan. The 40B housing plan is separate of the council’s purview.

Daigle recused herself from the discussion on the overlay expansion as well as the vote to continue the hearing.

Sheehan told the council that his clients support extending the overlay district so long as their properties are also included in it.

“There is good evidence to support the proposition that the future of (the Pulaski industrial site) may well not be entirely industrial,” he said. “It may very well include commercial uses such as the commercial uses that are presently in existence at the Mills 58 property and we would like to have the opportunity to engage in those future uses if we decide to do so going forward.”

While the mill overlay district is intended to be used on sites with these structures, the city’s regulations do not strictly require that the buildings be former mills.

“This is not a request for a special permit. We should not be dealing with just one person’s land, particularly whereas here we’re dealing with an industrial site, which is made up of a number of owners,” Sheehan said.

He also asked that the council pass a zoning amendment that would require future residential projects to obtain a special permit if they seek to build in a mill overlay zone.

“This would protect against any claims by residential users that would seek to put out of business, in plain English, the industrial and commercial uses that presently exist,” Sheehan said.

Ward 3 Councilor Stephanie Peach, who represents that neighborhood and made a motion to continue the hearing, said she supports the overlay expansion as it currently stands and will continue to examine Sheehan’s proposed addition.

While the affordable housing piece at Mills 58 won’t come before the council, Peach said, it gives the city a chance to see how housing could play out in a mill overlay district.

“The work that’s happened and the transformation that we’ve seen over the last few years in those once dilapidated mill buildings is really remarkable,” she said.

“We’ve seen it done in so many communities around us,” she added. “I’m happy to see that Peabody has taken the steps to move forward and hopefully we can continue to do some more projects like this across the city.”