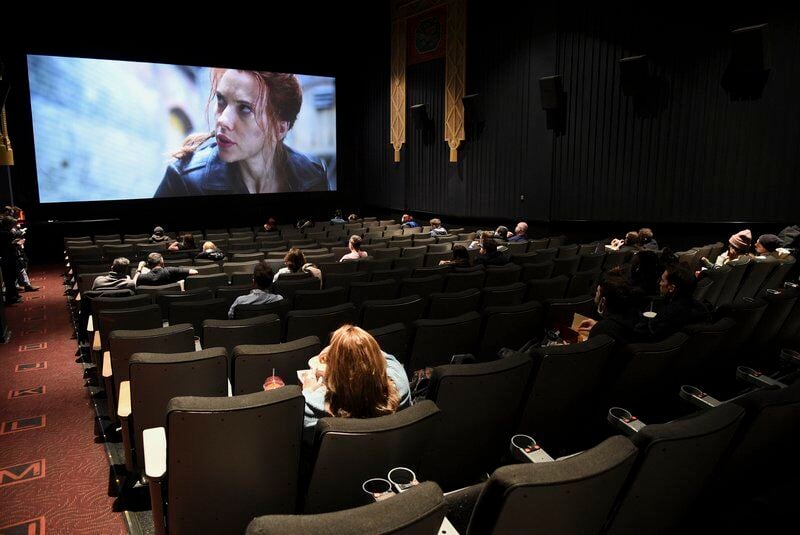 Moviegoers sit in a socially distant seating arrangement at the AMC Lincoln Square 13 on the first day of reopened theaters in New York on March 5. (Evan Agostini/Invision/AP) 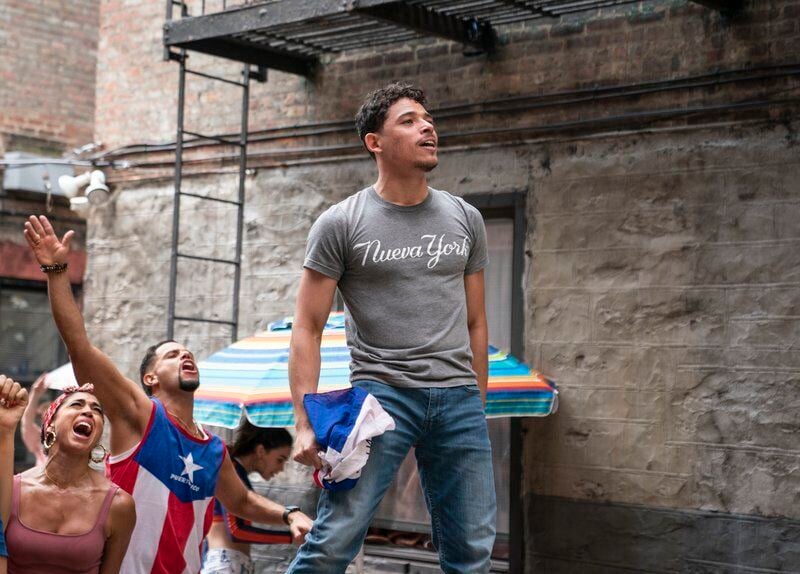 Anthony Ramos stars in "In the Heights." (Macall Polay/Warner Bros. Pictures via AP) 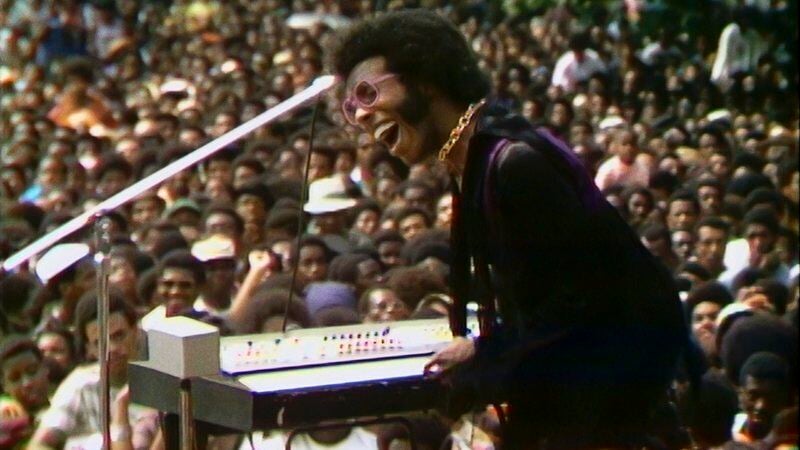 Sly Stone performs at the Harlem Cultural Festival in 1969, featured in the documentary "Summer of Soul." (Searchlight Pictures via AP) 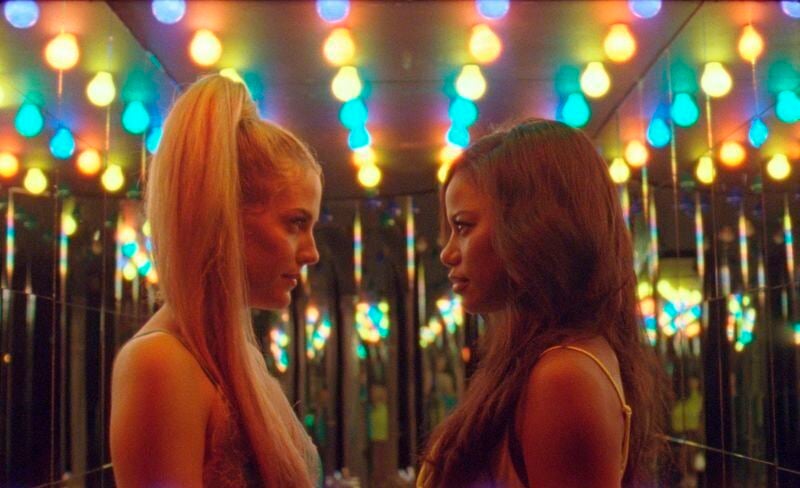 Riley Keough, left, and Taylour Paige are shown in a scene from "Zola." (A24 via AP) 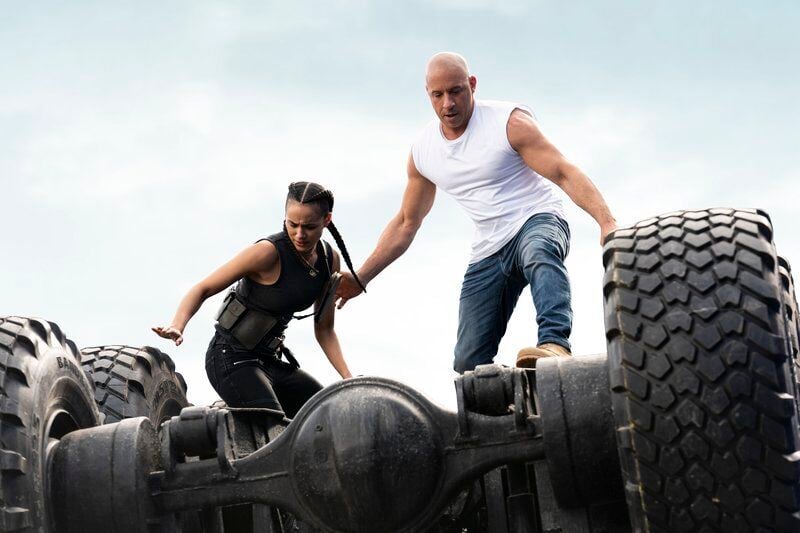 Nathalie Emmanuel and Vin Diesel are back in the latest "Fast and Furious" sequel, "F9." (Giles Keyte/Universal Pictures via AP)

Moviegoers sit in a socially distant seating arrangement at the AMC Lincoln Square 13 on the first day of reopened theaters in New York on March 5. (Evan Agostini/Invision/AP)

Anthony Ramos stars in "In the Heights." (Macall Polay/Warner Bros. Pictures via AP)

Sly Stone performs at the Harlem Cultural Festival in 1969, featured in the documentary "Summer of Soul." (Searchlight Pictures via AP)

Riley Keough, left, and Taylour Paige are shown in a scene from "Zola." (A24 via AP)

Nathalie Emmanuel and Vin Diesel are back in the latest "Fast and Furious" sequel, "F9." (Giles Keyte/Universal Pictures via AP)

After more than a year of uncertainty and ever-fluctuating release schedules, there will be a summer movie season. The blockbusters are back. The smell of popcorn is in the air.

Summer movies have always been stuffed with calamity and cataclysm, but this year, the existential threat is also off-screen. The pandemic has brought extensive changes for the movies, which have clung to life the last 14 months mainly on small screens. Can moviegoing be resuscitated? This summer will be a profound test of survival, and not just for Vin Diesel.

But, for us at least, absence has only made our moviegoing hearts grow fonder. Here are a few of the things we’re looking forward to this summer at the movies.

SITTING IN THE DARK WITH STRANGERS

Please, please, please silence my phone. And while you're at it, burn my couch and toss my laptop in the ocean. Dim the lights. Light the screen. Our movie experiences these past 14 months have been isolated, muffled and downsized. As good as many of the movies have been, they've all been missing something that you can't get without a packed house and a big screen. That's where the movies live, and where we surrender. — Coyle

It may sound silly since they are advertisements, but I’m really excited about watching trailers on the big screen again. Even though they’re so, so accessible everywhere now, there’s really nothing like seeing them in a theater, and part of it is simply because you don’t know what’s coming. I still remember the thrill of seeing the Lucasfilm logo and realizing that we were about to watch that first “The Phantom Menace” trailer and hearing Bernard Sumner’s twangy guitar inviting us into the “Marie Antoinette” teaser, or the frenetic energy of Karen O’s cover of “The Immigrant Song” for “The Girl With the Dragon Tattoo.” Even the Frou Frou-overlayed spot for “Garden State.” Some of these movies I went on to like and some I didn’t, but I will always love the trailers. “West Side Story,” “No Time to Die,” blow us away. — Bahr

“In the Heights” is your movie of the summer. Jon M. Chu’s exuberant adaptation of Lin-Manuel Miranda’s musical (out June 11) is a blockbuster block party — a flat-out celebration of romance, Latino heritage, music, New York and, I expect, the communal thrill of the movies. It’s going to blow the roof off. And while there are many performers in Chu’s ensemble that deserve credit — including Leslie Grace, Corey Hawkins and Melissa Barrera — “In the Heights” gets its swagger from its charismatic lead. As part of the original “Hamilton” cast and a supporting player in “A Star Is Born,” a breakthrough has been coming for the 29-year-old actor. And he is, um, not throwing away his shot. — Coyle

Yes, we’ve been burned before by the Disney-ride-turned-movie-concept, but something about “Jungle Cruise” (in theaters and on Disney+ Premier on July 30) has me unambiguously excited. The ride is not some personal favorite. But who wouldn’t want to see an action adventure in the vein of “Romancing the Stone” with two majorly charismatic movie stars like Emily Blunt and Dwayne Johnson in chic safari wear? The idea of just seeing them riff off one another makes me smile. — Bahr

Movies don’t have to be complex. Just shoot some cars into space, OK? Is that REALLY so much to ask? Thankfully, the “Fast and the Furious” franchise has never been accused of overthinking anything. Its ninth (ninth!) installment, “F9” (June 25), promises one of the series’ most ridiculous stunts yet, one that I can only assume will be one giant step-on-the-gas for mankind. — Coyle

The concert movie of the summer comes from a familiar source in a new role. Amir “Questlove” Thompson, the musically ubiquitous Roots drummer, makes his directorial debut in “Summer of Soul (...or When the Revolution Could Not Be Televised),” a foot-stomping time capsule of a landmark 1969 Harlem concert series. The film, which opens July 2 in theaters and on Hulu, unearths little-seen performances by Stevie Wonder, Nina Simone, Sly and the Family Stone, the Staples Singers, and others from a summerlong festival known as “Black Woodstock.” It goes without saying but: Play it loud. — Coyle

It’s been hard to find crowd-pleasers without crowds, but Siân Heder’s totally winning, knockout family drama “CODA” has managed to do it. When the film debuted virtually at the Sundance Film Festival in January, critics were nearly unanimous in wishing they had seen it in a crowded theater like Park City’s Eccles. When “CODA” opens in theaters (and on Apple TV+) on Aug. 13, moviegoers will have that chance. It’s about a teenage girl who’s the only hearing person in her family, a hardscrabble Gloucester, Massachusetts, fishing clan. Her passion, it turns out, is to sing. As Hollywood as the setup sounds, “CODA” is made with such spirit and lived-in authenticity that it feels like a feel-good godsend. — Coyle

DEV PATEL ON A HORSE

A new David Lowery film is always reason for celebration, and this time, he’s taken on the 14th-century poem Sir Gawain and the Green Knight. ("The Green Knight" is out July 30). Remember, he made a searing meditation on grief out of Casey Affleck in a bedsheet and Rooney Mara eating a pie. Lowery cast Patel in the lead (partially) because he couldn’t get the image of how cool he’d look on a horse out of his head, and, quite frankly, now I can’t either. — Bahr

It will be interesting how people respond to Janicza Bravo's “Zola” (in theaters June 30), the summer movie with the oddest IP: an infamous 148-tweet thread on Twitter. Bravo and co-writer Jeremy O. Harris have turned that notorious escapade — in which a pair of strippers (Taylour Paige, Riley Keough) go on an impromptu road trip to Miami shortly after meeting — into a wild and woozy trip through social media, sex work and cinema. — Coyle

WHATEVER ‘AMERICA THE MOTION PICTURE’ IS

Netflix describes the animated “America the Motion Picture" (June 30) as “a chainsaw-wielding George Washington teams with beer-loving bro Sam Adams to track down the Brits in a tongue-in-cheek riff on the American Revolution.” The cast includes Channing Tatum as Washington and Jason Mantzoukas as Adams, and I can already feel the patriotism welling up in me. — Coyle