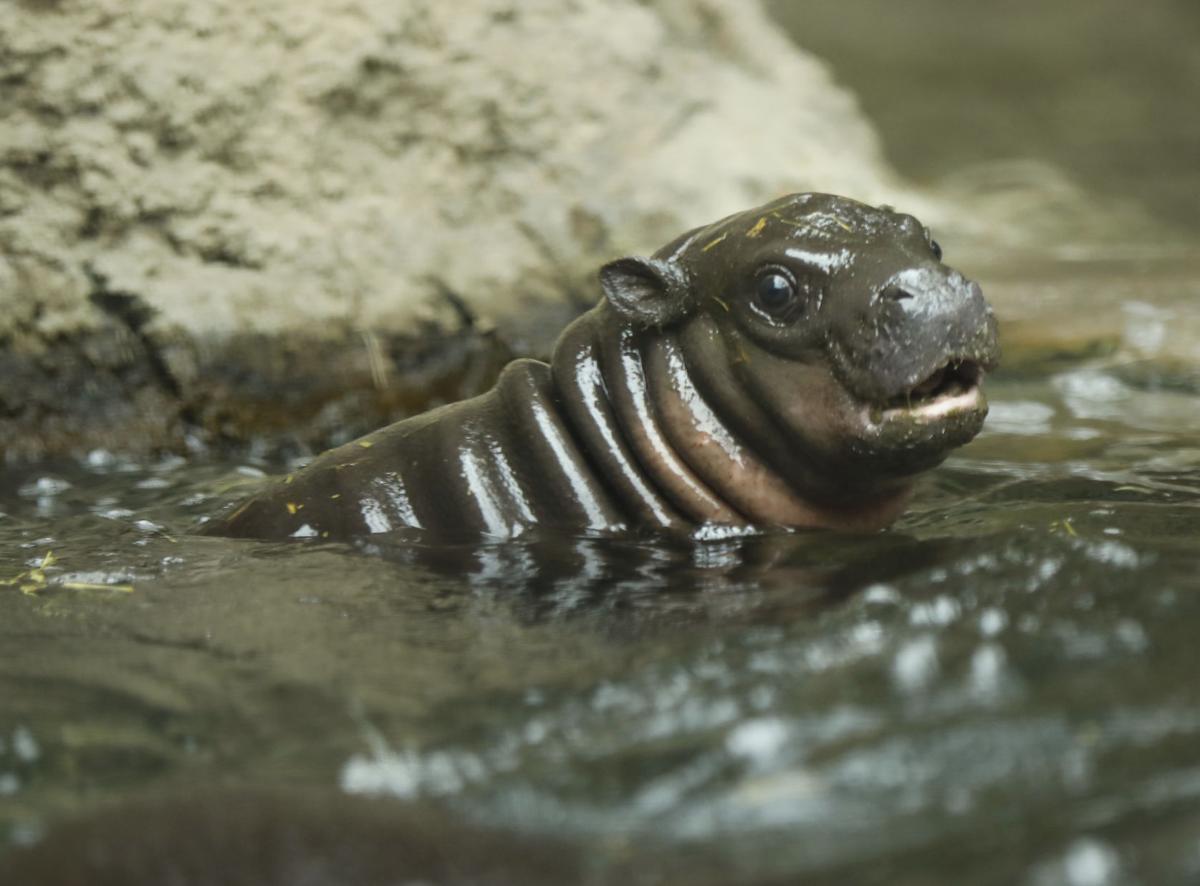 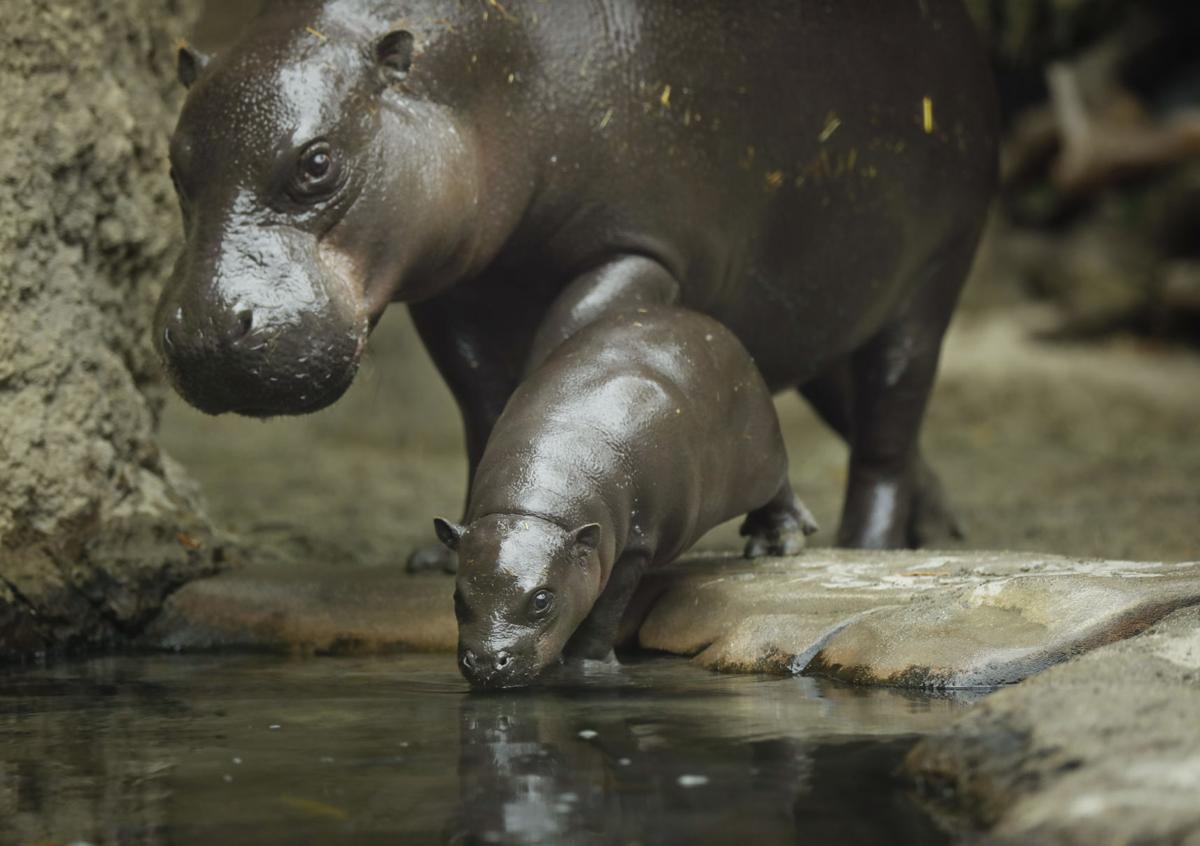 Akobi walks with his mom, Mabel, into the water at the San Diego Zoo on Monday. (K.C. Alfred/San Diego Union-Tribune/Tribune News Service) 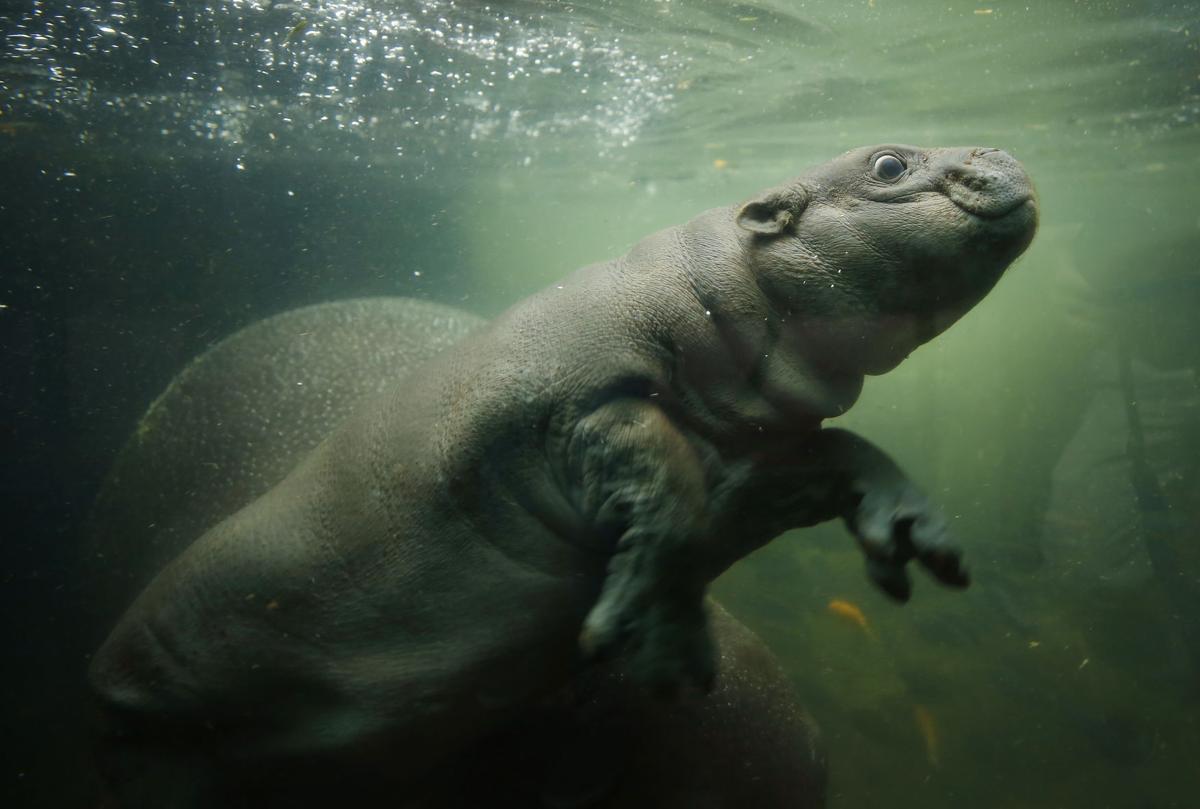 Akobi was introduced to the public for the first time as he explored the main exhibit on Monday. (K.C. Alfred/San Diego Union-Tribune/Tribune News Service)

Akobi walks with his mom, Mabel, into the water at the San Diego Zoo on Monday. (K.C. Alfred/San Diego Union-Tribune/Tribune News Service)

Akobi was introduced to the public for the first time as he explored the main exhibit on Monday. (K.C. Alfred/San Diego Union-Tribune/Tribune News Service)

San Diego Zoo members got to see Akobi, a 2-month-old baby pygmy hippo, splish-splash through his new enclosure this week under his mother’s watchful eye.

“The fact that we got to this day is a huge, huge, huge thing, and we’re really excited,” said Leanne Klinski, a zoo wildlife specialist and one of the caretakers.

Akobi is Yoruba for “firstborn,” and the calf is both his mother’s firstborn as well as the first pygmy hippo successfully born at the zoo in more than 30 years. There are fewer than 3,000 pygmy hippos left in the forests of West Africa, where they munch on fruits, aquatic plants and grasses.

Although they are about 10 times smaller than the common hippopotamus, don’t let the name fool you: A pygmy hippo can weigh up to 550 pounds.

Akobi is still a little one for now. He tips the scales at about 40 pounds, with stubby legs sticking out from his rotund body. Before he got his official name, his keepers affectionately called him “nugget.”

Akobi and his mother, Mabel, have spent the last two months in a smaller enclosure. But on Monday, they entered a larger habitat where the public will be able to see them when the zoo reopens fully on Saturday.

Mabel guided her calf around the enclosure while he followed close at her heels. They started with a few tentative dips in the pool. Minutes later, Akobi plunged headlong into the water, scampering along the bottom.

Hippos technically can’t swim; they mostly walk underwater, and Akobi’s little legs are too short to move about with the ease of his mother. Mabel kept a close eye on him, occasionally using her mouth to nudge Akobi upward for a breath of air.

“Her motherly instincts have been right spot on,” Klinski said.

It was a relief for Klinski and her team, who had used ultrasound to track Mabel’s pregnancy. Breeding pygmy hippos successfully can be tricky. In 2015, the zoo announced that a baby pygmy hippo had died about one week after its birth.

But Akobi’s keepers say that he’s doing well and nursing regularly. If all goes well, in the next few days, keepers will reintroduce to the enclosure monkeys native to the forests of central and West Africa.

The monkeys usually keep to themselves, but they’ve been known to occasionally interact with the hippos — sometimes even hopping on them for a free ride.

“It’s going to be a lot of fun when we finally add those extra layers,” Klinski said.