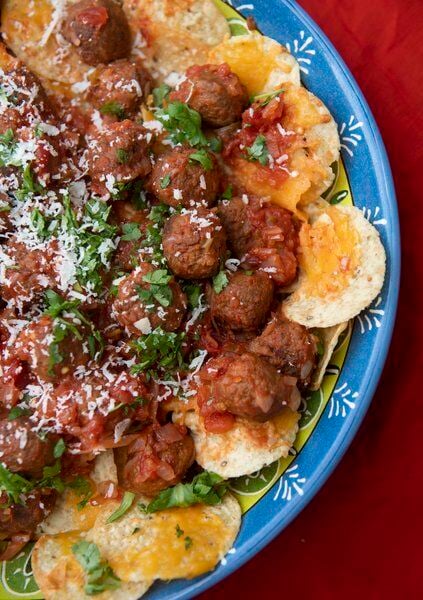 These nachos pack two crowd-pleasers into one hearty snack. Pork meatballs are dunked into a chunky salsa and served on cheesy tortilla chips. (Tribune News Service) 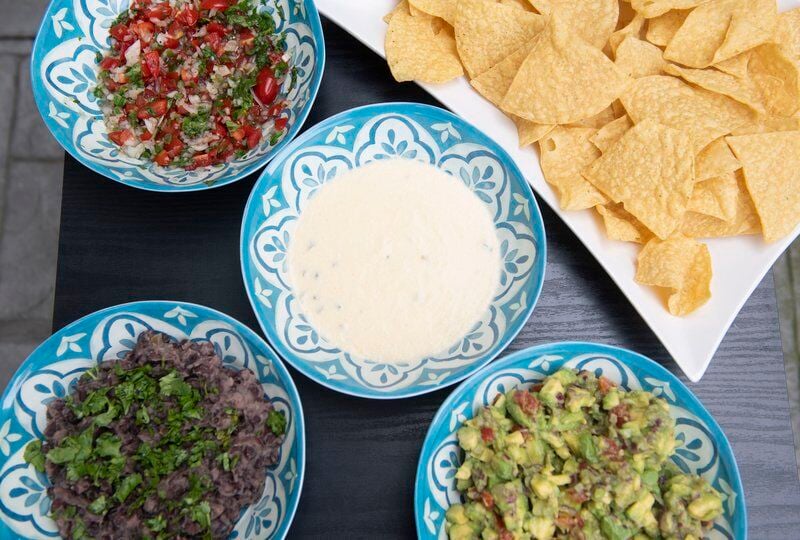 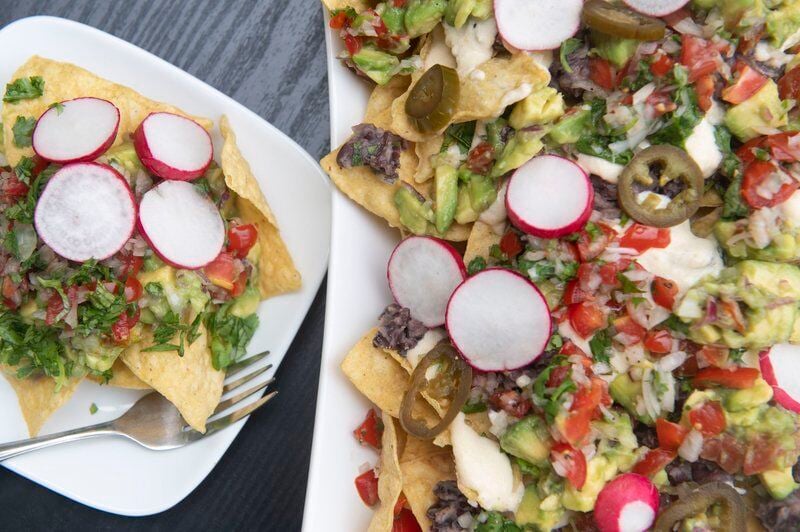 These nachos pack two crowd-pleasers into one hearty snack. Pork meatballs are dunked into a chunky salsa and served on cheesy tortilla chips. (Tribune News Service)

Request a recipe for nachos, and you might get an eye roll.

After all, there is nothing to it. Piling things on chips and warming them in a microwave or oven is as complicated as boiling water.

But it requires a little more effort as the ingredient list becomes longer or when each step involves a different technique. Then there’s the question of which toppings can handle a high temperature and which can’t.

Sometimes, all you want are bar-style nachos that are crispy yet gooey and creamy yet spicy. And who doesn’t love nachos loaded with enough meats, beans, vegetables and guacamole to make a meal in itself?

They all start off with tortilla chips sturdy enough to hold up toppings effortlessly. The chips then are covered with a generous sprinkling of shredded cheese or doused with a velvety cheese sauce and heated. Finally, top those chips with whatever your heart desires and diet dictates.

One of the appetizer’s unsung heroes is cilantro, which adds a flavor and aroma like no other herb. There is no such thing as too much cilantro; it can be added to the pico and guac and sprinkled on top.

Nachos can be multilayered with smashed black beans scented with cumin, luxe queso with bits of pickled jalapeños, shredded or pulled pork or chicken, crumbled tofu, fresh and bright pico de gallo, and finished with a squiggle of sour cream.

Or keep them simple, just to one layer. That’s how nachos were first made in the Mexican town of Piedras Negras in the early 1940s. The story goes that four American tourists stopped by Moderno Restaurant and wanted fried tortillas. But there was nobody in the kitchen.

So a waiter named Ignacio “Nacho” Anaya “sliced a tortilla in four pieces, put some cheese and slices of jalapeño on top and stuck it in the oven for a few minutes,” according to the San Antonio Express-News. When the diners wanted to know what they were called, he responded, “Nacho’s Especial.” The name was eventually shortened to nachos, and it became the most popular appetizer at the restaurant.

The waiter’s nickname, by the way, had nothing to do with his creation. It was a common nickname for anyone named Ignacio in Mexico, writes Robb Walsh in “The Tex-Mex Cookbook.” Nor did the nickname win him any fortune when he opened Nacho’s Restaurant across the border in Texas.

When the word spread about the cheesy and spicy appetizer, variations started popping up. While tortilla chips and gooey melting cheese are a mainstay, recipes for vegan versions call for pulled jackfruit smothered in barbecue sauce and there are keto ones built on pork rinds or cheese crisps.

No matter what kind of nachos you like, there are some common-sense tips for doing it right:

— Bring refrigerated toppings to room temperature before piling them onto the warm chips.

— To prevent the chips from getting soggy, sprinkle grated or crumbled cheese on top and bake them in the oven for a few minutes. When melted, the cheese will act as a buffer between the chips and toppings.

— The chips should to be heated evenly and the cheese well melted. It is not about browning or charring them, so use the oven and not the broiler to do the job.

— While nachos are a free-form snack, don’t go nutty. Banana is forbidden.

So load up the nachos to make the appetizer a meal, and you will be all set for football Sunday.

Hearty does not begin to describe these nachos built with a chunky salsa and meatballs. Ground turkey or chicken can be used in place of the pork.

Make the salsa: In a bowl, stir together the onion, bell pepper, cumin, cayenne pepper and crushed tomato sauce. Season with salt. Add the cilantro and tomatoes, and combine well. Cover, and set aside.

In a heavy pot, heat the oil over medium. Add meatballs in batches, and cook until browned, 8 to 10 minutes. Keep warm.

Assemble the nachos: Place half the tortilla chips on a baking tray, and sprinkle with 1 1/2 cups cheddar and 2 tablespoons pickled jalapeños. Bake at 350 degrees for 5 to 7 minutes or until the cheese is melted. Transfer chips to a wide serving bowl or platter. Repeat the process with the remaining chips, cheese and jalapeños.

Pour salsa over meatballs, and gently stir. Spoon the meatballs and sauce over the cheesy chips. Top with a sprinkle of cilantro and cotija or Parmesan cheese.