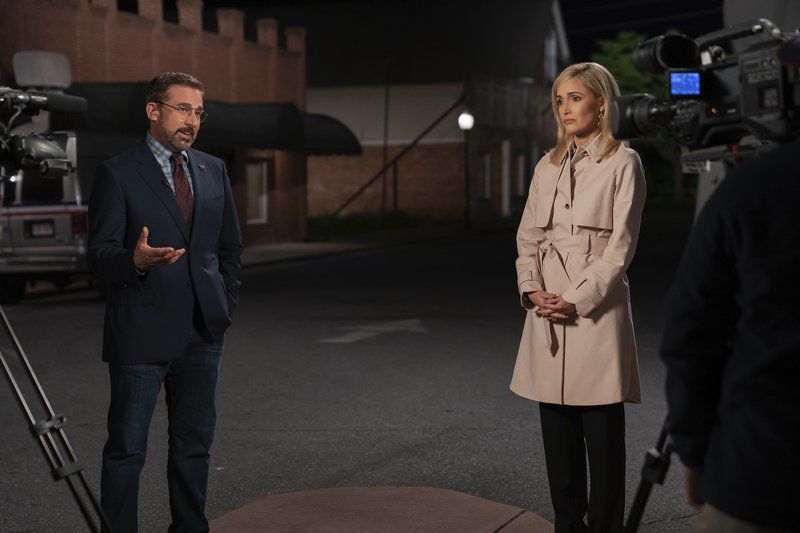 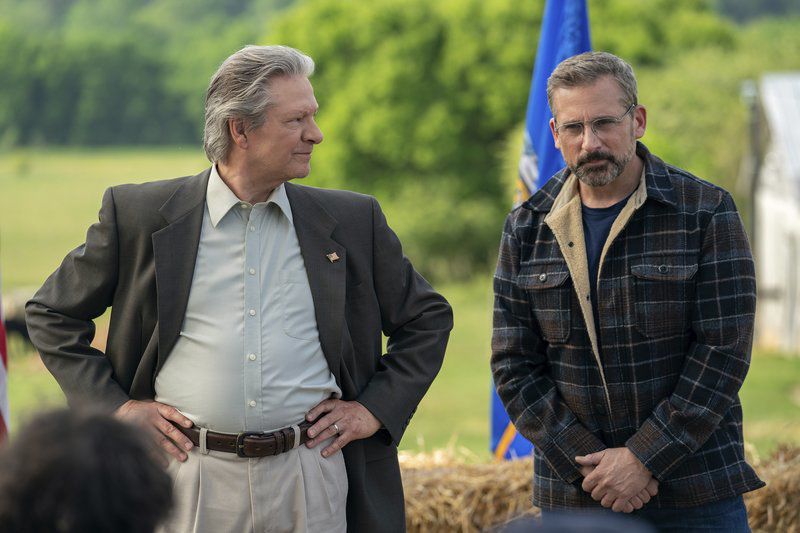 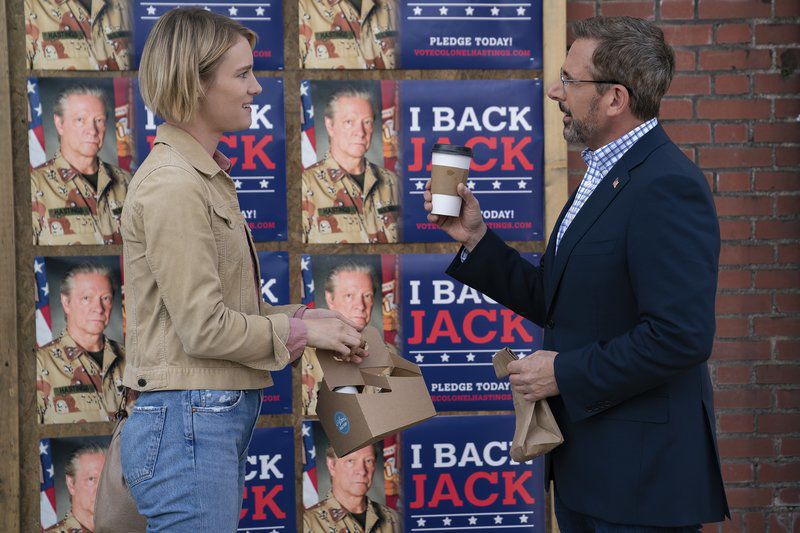 Mackenzie Davis and Steve Carell appear in a scene from "Irresistible." (Daniel McFadden/Focus Features via AP)

Mackenzie Davis and Steve Carell appear in a scene from "Irresistible." (Daniel McFadden/Focus Features via AP)

At one point in “Irresistible,” Jon Stewart’s new political satire, a cable news anchor tosses a question to an absurdly overstuffed panel of 12 analysts, each in their own little “Brady Bunch” square. Immediately, they start shouting at once, drowning each other out.

It's just a quick, amusing bit, but for die-hard Stewart fans, it may evoke a memorable moment: his 2004 appearance on CNN’s “Crossfire,” where he accused the debate show's hosts of being “partisan hacks” who were hurting America by imposing an artificial red-blue divide on every issue.

And it's essentially that same message that the former Comedy Central host is trying to get across in 2020 with this, his second feature (after the accomplished Iran-themed “Rosewater"). Here, he takes aim not so much at the media — well, not ONLY the media — but the whole institutional structure via which we elect our leaders, and the corrosive role money plays in it.

So what else is new, you may ask? And what about, you know, everything else that's happened the last few years? Stewart's enduring influence is a double-edged sword here: Too many folks have been waiting to find out what he makes of what's going on today, and they'll likely be disappointed not to find out — at least not enough in this movie, which feels like it takes place well before the election of Donald Trump, even though it starts the next morning.

Yet “Irresistible" has its smart laughs and real pleasures. For one thing, the lead actors are perfectly cast, with Steve Carell managing to both annoy and endear as a self-reverential Democratic consultant, and Rose Byrne hilarious as a Kellyanne Conway-esque Republican campaign guru who loves bold colors, ruffles, profanity and punctuation marks.

When we meet Gary Zimmer, he's hiding in bed the morning after his surefire candidate — that would be Hillary Clinton — has lost. “He’s probably halfway to Canada by now,” they're saying on “Morning Joe.”

Soon after, Gary's shown a viral video of a farmer in small-town Wisconsin, facing down the mayor and city council with an eloquent speech on behalf of undocumented workers. Jack Hastings (a terrific Chris Cooper) is a retired Marine colonel, to boot, and a widower who lives with his lovely 28-year-old daughter, Diana (a spot-on Mackenzie Davis).

Bells go off in Gary's head: Swing state! Reclaiming the heartland! Redemption! On his rented private jet to Wisconsin, munching on his specially ordered caprese salad with mozzarella balls, he studies the state's Wikipedia page.

In tiny Deerlaken, Gary tries to ingratiate himself with the locals, who call him “D.C. Gary,” ply him with homemade streusel (watch Carell devour it!) and humor him when he condescendingly orders “a burger and a Bud.”

Jack agrees to run for mayor, but insists Gary run the campaign. Soon, the race attracts the attention of Gary's afore-mentioned nemesis, Faith Brewster (Byrne), who enters the fray to quash Gary's new media star before he can rise any further. So Gary has to bring in the big guns. Whisked by private jet to an Upper West Side living room, Jack tells the rich Manhattanites how silly it feels to be asking for money when they know nothing about his town. But the checks come flowing in.

As things heat up, Gary and Faith get nasty (despite or because of their obvious sexual tension), and wouldn't you know, there'll be some dirty tricks thrown into the mix, to the horror of Diana, Jack's daughter. She's the conscience of the film, especially when she asks: “Is THIS politics?”

A last-minute shocker of a plot twist provides a deft and satisfying ending — we don't see it coming. But as things close, we realize we never once really learned, well, what people believe and want in this town — besides simply loving it.

There IS one moment that feels particularly current. Faith lies on live TV, preposterously, leaving Gary sputtering with anger on the other side of the split screen. But he also knows it was a genius move. "She said it, and now it’s the truth,” he mutters.

Faith has already walked away. But what if these two had actually hashed it out, maybe over a burger and a Bud, this whole “alternative facts” thing? With Carell and Byrne, that would have been an argument worth hearing. Maybe even irresistible.

“Irresistible,” a Focus Features release, has been rated R by the Motion Picture Association of America “for language including sexual references.”

Q&A: Jon Stewart is still fighting for the middle ground

When Jon Stewart signed off from the “The Daily Show” five years ago, he didn't say goodbye. “The conversation isn't ending," Stewart said.