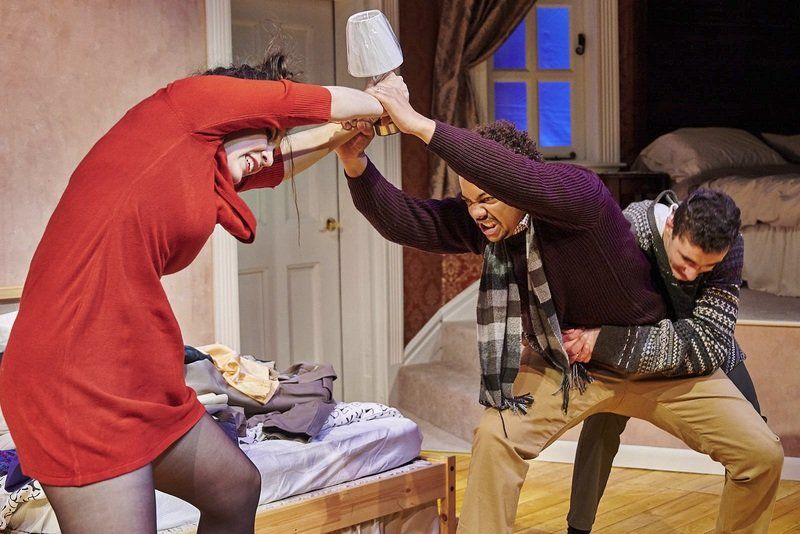 KEVIN DOYLE/Courtesy photoFrom left are Alexandra White as Susannah, Anthony White as Trevor and Steven Caliskan as Malcolm in "Bedroom Farce," which runs from today through Feb. 23 at Salem State University's Callan Theatre. 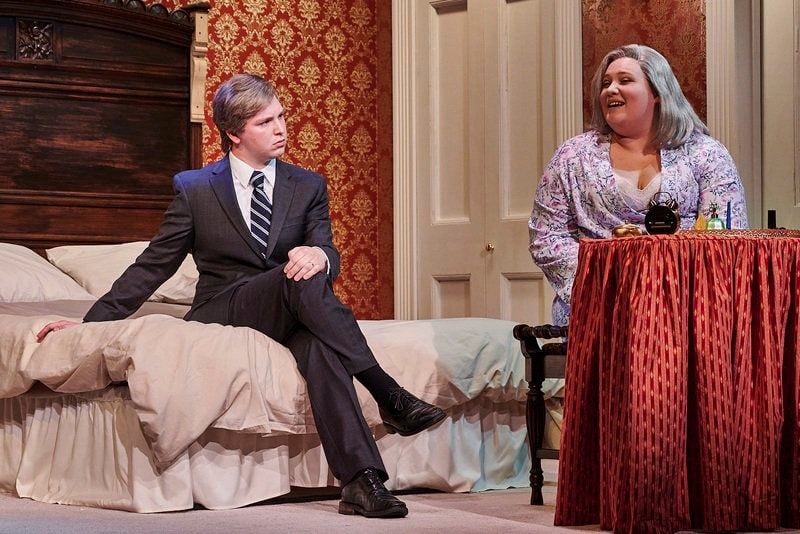 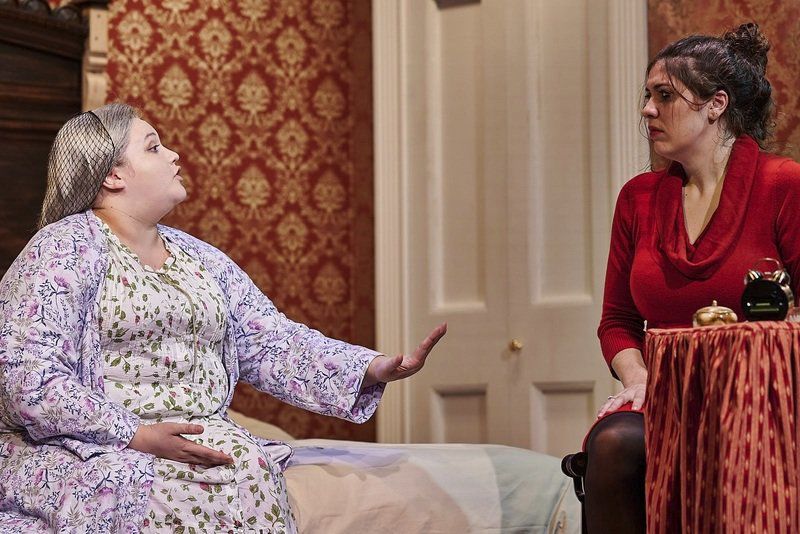 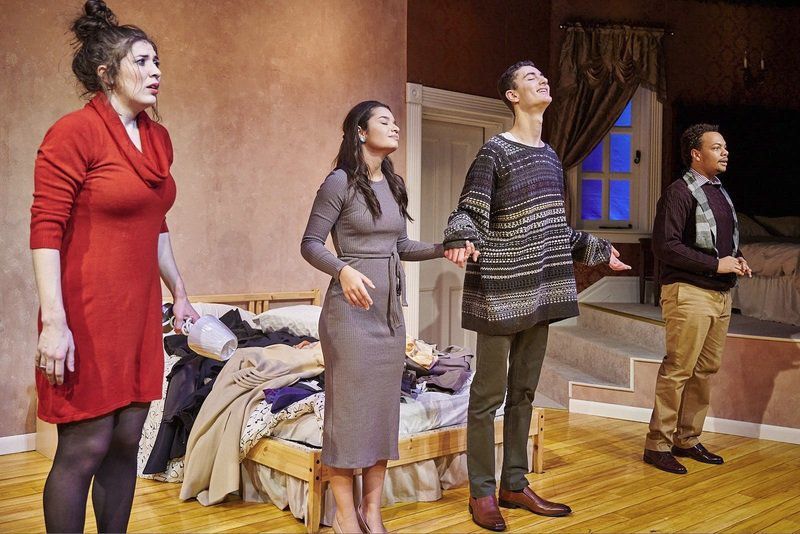 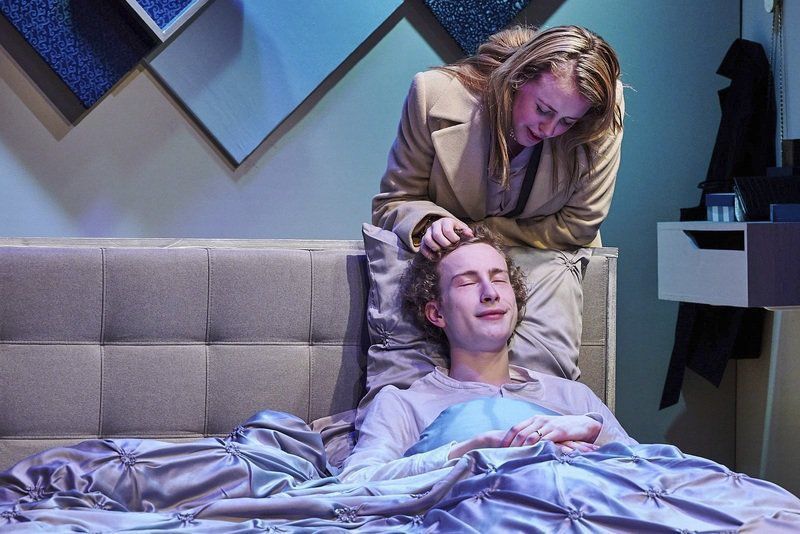 KEVIN DOYLE/Courtesy photoRyan Doyle, of Andover, and Michelle Moran, of Framingham, play Nick and Jan, one of four married couples at the center of "Bedroom Farce."

KEVIN DOYLE/Courtesy photoFrom left are Alexandra White as Susannah, Anthony White as Trevor and Steven Caliskan as Malcolm in "Bedroom Farce," which runs from today through Feb. 23 at Salem State University's Callan Theatre.

KEVIN DOYLE/Courtesy photoRyan Doyle, of Andover, and Michelle Moran, of Framingham, play Nick and Jan, one of four married couples at the center of "Bedroom Farce."

The theater department at Salem State will not only celebrate love on Valentine’s Day, but also the institution of marriage.

They will do that by staging “Bedroom Farce,” a play by Alan Ayckbourn about three married couples who are trying to accommodate a fourth couple, which is falling apart.

“These two people are just pains in the neck,” said Celena Sky April, who is directing the play. “But everyone’s got that tight British decorum, and watching them trying to keep a lid on it is funny.”

“Bedroom Farce” debuted in England in 1975, and two actors earned Tony Awards in a production that appeared on Broadway in 1979.

Ayckbourn, who has also worked extensively as a director, has written more than 80 plays over 60 years, but is not widely produced in America these days, April said.

“I was raised on Alan Ayckbourn in college, with plays like ‘Absurd Person Singular,’” she said. “Carole Shelley and all these great old British actors were always in his plays. He feels like he’s a reincarnation of Shaw and Coward, with that elevated language and funny stage business.”

The troubled couple in “Bedroom Farce,” Susannah and Trevor, start fighting in the first act and ruin a party that is being held by Malcolm and Kate.

After Susannah and Trevor split up for the evening, they seek shelter from each other in apartments owned by the other three couples.

Along with Malcolm and Kate, these include Delia and Ernest, who are Trevor’s parents, and Nick and Jan, who used to date Trevor.

“We’re in the Callan Studio Theatre, which is an intimate space that seats 80,” April said. “We’ve got all three bedrooms onstage at the same time, so it’s very funny. By the time you get into the crazy part in act two, we’re leaping from bedroom to bedroom.”

The term “farce” in the title alludes to this type of action, where the focus cuts back and forth between rooms and characters barge in and out of doors, April said.

“It’s really more of a romantic comedy, when you look at it,” she said. “The farcical aspects of it are how the evening deteriorates with four couples, with a sweet resolution at the end.”

Trevor and Susannah are “the most neurotic people in the world,” April said, and their disruptions stir up tensions between the couples whom they visit.

She said that Ayckbourn once revealed that he had experienced something similar, when an actor followed him and his wife home and sat on the end of their bed and talked about himself while they tried to go to sleep.

Susannah tries to cheer herself up by chanting mantras and affirmations that proclaim her self-worth, which seem typical of the 1960s and a culture of self-absorption, April said, but may have only intensified today.

“Now it’s such a given, where people are sharing their inner everything on social media,” she said.

Ayckbourn’s wit serves as an antidote when Trevor and Susannah take themselves too seriously, and may seem even more effective today.

“For my students, they don’t know what wit is — word humor,” April said. “They’re used to insult humor, what I call the new humor.”

Staging “Bedroom Farce” lets her introduce students to theatrical traditions such as the comedy of manners, in which playwrights like Ayckbourn, George Bernard Shaw and Noel Coward satirize the societies they lived in.

This production also gives April’s actors a chance to work on their British dialects, although the action will be set in the present, rather than the 1970s.

“We put it in the present, because we think it is still applicable,” she said.

April thinks that “Bedroom Farce” also has plenty to say to anyone who has ever been in love, especially if their romance resulted in marriage.

“I think it is a delightful valentine for married couples,” she said. “You chuckle at how they manage to get through a rough night, and the different ways that couples click, whether it’s practical joking or snacking in bed.”

How much: $20 for adults, $15 for seniors and students, and free for those under 18 and Salem State students

For the hopelessly unromantic, here are a few options for avoiding love on Valentine’s Day in Salem.

The fourth Anti-Valentine Tour hosted by Salem Night Tour will focus on murderous marriages, love gone wrong and the worst that Valentine’s Day has to offer. This tour is designed for the hopelessly single, the ironically cool, the just-friends and the happily-in-love alike. Free hot chocolate will be served during the check-in, and each ticket comes with a special surprise. Friday at 6 and 8 p.m. and Saturday at 8 p.m., 127 Essex St., 978-741-1170. Tickets $20 or $21 at www.salemghosttours.com.

Longboards Restaurant & Bar holds an Anti-Valentines Day Party because not everyone loves someone, and not everyone gets all mushy on Valentine’s Day, and everyone who feels that way should be able to spend a night of eating, drinking and just having fun with like-minded, anti-mushy people. Drink and food specials will be offered, along with a prize pack for the winner of the night’s raffle. Friday at 8 p.m., 72 Wharf St., 978-745-6659, www.longboardsbar.com.

“Bad Romance” at Salem Athenaeum will feature local storytellers Taylor Rae Botticelli, Alison Gerber, Matthew Korahais, Agatha Morrell, Guthrie Scrimgeour, Mingyue Tao and Alex Verville, who will explore the pain of mangled hearts and unrequited love. This fun and heartfelt evening of breakdowns and breakups will also feature live folk music. Beverages and snacks will be served, and the program will last approximately 90 minutes. Saturday at 7:30 p.m., 337 Essex St., 978-744-2540. Free to members and students with ID, $10 for nonmembers at www.salemathenaeum.net.