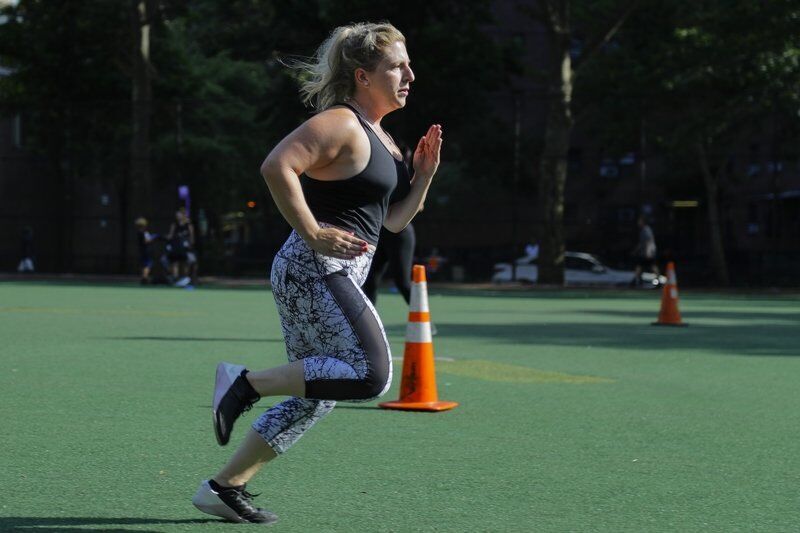 Lauren Wire works out during a fitness class in New York, one of the ways she is working to lose the weight she gained while staying home due to the coronavirus pandemic. (Frank Franklin II/Associated Press) 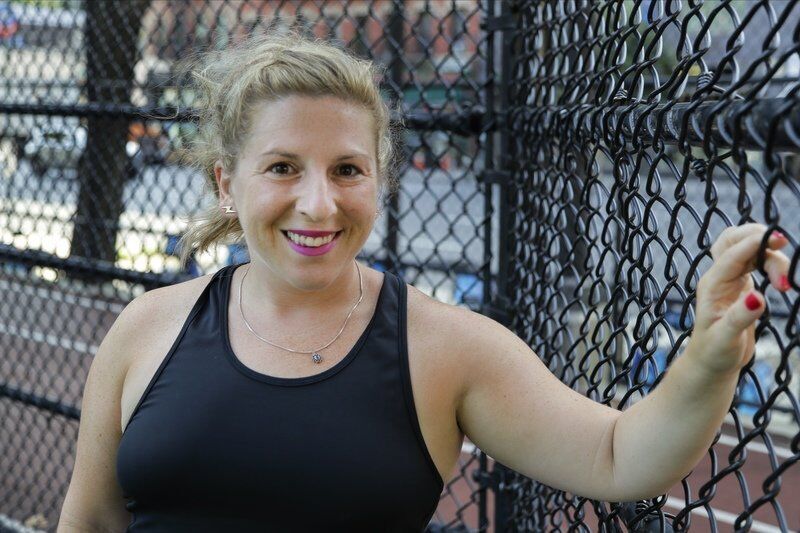 Lauren Wire, a 32-year-old publicist who lives in Manhattan, gained back 12 of the 50 pounds she lost leading up to the pandemic because she was ordering in a lot from restaurants and partaking in social distance cocktails with friends. She's starting to shed pounds again by biking outside. (Frank Franklin II/Associated Press)

Lauren Wire works out during a fitness class in New York, one of the ways she is working to lose the weight she gained while staying home due to the coronavirus pandemic. (Frank Franklin II/Associated Press)

Lauren Wire, a 32-year-old publicist who lives in Manhattan, gained back 12 of the 50 pounds she lost leading up to the pandemic because she was ordering in a lot from restaurants and partaking in social distance cocktails with friends. She's starting to shed pounds again by biking outside. (Frank Franklin II/Associated Press)

When Allison Weiss Brady and Michael Ladin emerged from weeks of locking down during the pandemic, they needed new clothes in new sizes — for different reasons.

Brady, 49, a charity fundraiser from a Philadelphia suburb, had been pulling back on her candy-buying sprees during the lockdown and stepped up the cardio workouts at her home gym out of boredom. She lost 20 pounds and went down two sizes. In contrast, Ladin, 58, of Oak Park, Illinois, gained 10 pounds this past spring after sitting around eating chips and dip.

“I'm not surprised. If I don't work out consistently, I gain weight," said Ladin, who works in marketing.

Many Americans like Ladin and Brady are changing clothing sizes depending on how they spent their time sheltering at home. And brands from Levi Strauss & Co. to lingerie label Cosabella are taking note. So are body measuring technology companies, which report that shoppers are changing their measurements on their online profiles.

The trend could be good for clothing companies — new sizes likely mean that customers' wardrobes need to be updated. But retailers, already feeling the pain of decreased spending during uncertain economic times, are also facing an increase in costly returns as shoppers try to figure out their new sizes.

“Anecdotally, we’re seeing shoppers come back into stores unsure of their size," said Marc Rosen, executive vice president and president of Levi Strauss Americas, in a statement to The Associated Press. “For most, it’s been a long time since they’ve tried on a pair of jeans, and they may be up or down a size."

Some companies are even adding larger sizes in response to shoppers' gaining weight, or what has been dubbed COVID-15.

Guido Campello, co-CEO of luxury lingerie brands Cosabella and Journelle, said that his two brands have been adding more generous cuts of some of its most popular styles in bras and sleepwear in recent weeks because of interest from its 2,100 store accounts. Loyal customers at its store locations are also requesting new sizes while making more exchanges.

Size fluctuations are bearing out in data from body measuring app Perfitly LLC. It cites a 20% increase in users redoing their avatars in April and May, compared with the same period a year ago, according to the company's co-founder and CEO Dave Sharma. That spike is similar to what it sees in January after the winter holidays, he said.

“Because it is a huge spike, we think it is because of the weight gain,” said Sharma, whose app has about 50,000 users nationwide. "They are sitting around, they don’t go to the gym, and they don’t go for jogs."

Fit Match, a startup firm that’s rolling out 3D technology to scan customers' bodies at malls, found only one-third of the 100 women it surveyed in Texas, where it piloted its first program, had no weight change during the lockdown, said founder and CEO Haniff Brown. Of the remainder, 15% gained more than 5 pounds, while 20% lost more than 5 pounds. Brown called this change “pronounced," noting that two-thirds of customers typically don't have any weight change during such a short time period.

Narvar Inc., a software company that powers returns for more than 200 brands, said that online returns have doubled from mid-March to early June, according to founder and CEO Amit Sharma. Retailers face more than $800 million in expenses from the additional returns in the second quarter, in part because of sizing issues but also because of buyers' remorse and shipping delays.

Brady took advantage of sales and spent several thousands of dollars in recent weeks on a new wardrobe that included T-shirts, inexpensive summer dresses and designer sweatshirts. She also sent her new measurements to her personal shoppers at Neiman Marcus and Saks.

“I feel great. My (old) clothes are huge," said Brady, who hadn't modeled in years but was recently hired on by a local agency.

Still, weight fluctuations may be here to stay as surges in new cases around the country force states like California to re-close businesses like gyms and encourage shoppers to shelter at home again.

Lauren Wire, a 32-year-old publicist who lives in Manhattan, worries that another lockdown could keep her gym closed during the winter months.

She gained back 12 of the 50 pounds she lost leading up to the pandemic because she was ordering in a lot from restaurants and partaking in social distance cocktails with friends. She said that she bought new shorts and swimwear when she gained the weight, but now, she's starting to shed pounds again by biking outside.

Ladin went to a local Kohl’s to buy several pairs of shorts.

“This will be enough to get me through the summer," he said, trying on his new clothes in the Kohl's parking lot because the store's fitting room was temporarily closed out of safety concerns. “I am not buying any more clothes until I lose weight.”