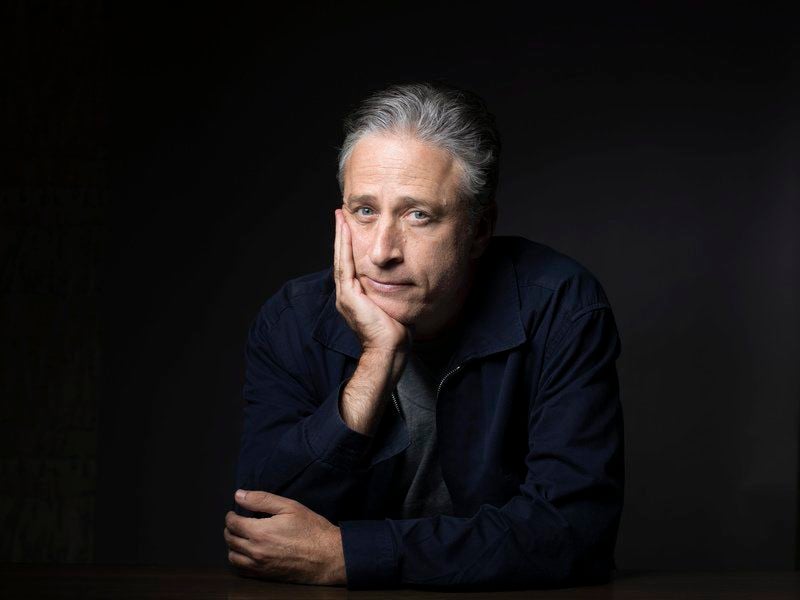 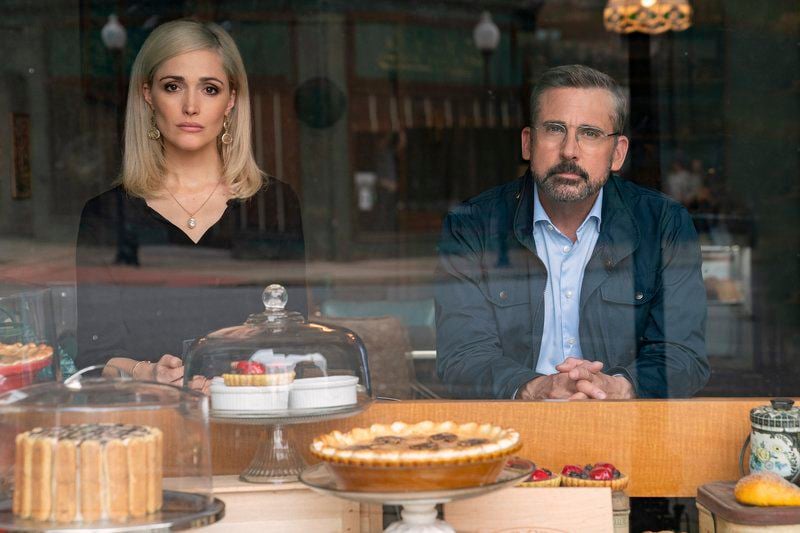 Steve Carell and Rose Byrne appear in a scene from "Irresistible," a political satire written and directed by Jon Stewart. (Daniel McFadden/Focus Features via AP) 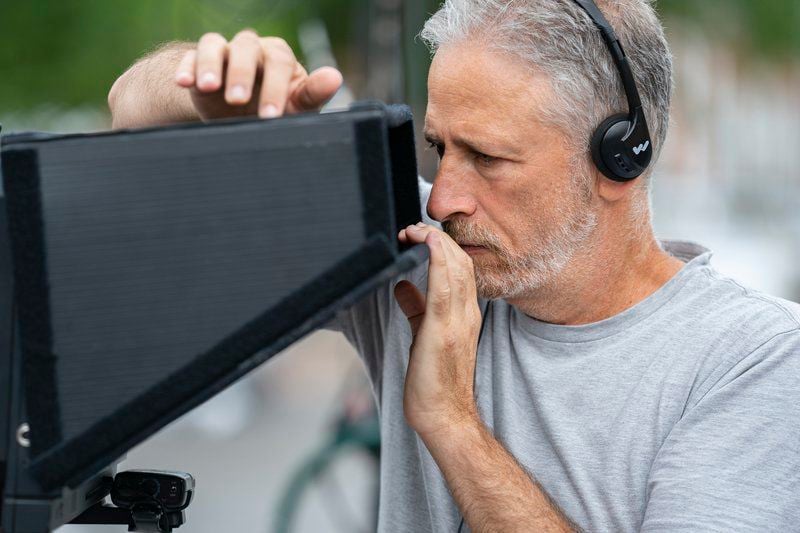 Director Jon Stewart appears on the set during the filming of "Irresistible." (Daniel McFadden/Focus Features via AP)

Steve Carell and Rose Byrne appear in a scene from "Irresistible," a political satire written and directed by Jon Stewart. (Daniel McFadden/Focus Features via AP)

Director Jon Stewart appears on the set during the filming of "Irresistible." (Daniel McFadden/Focus Features via AP)

When Jon Stewart signed off from the “The Daily Show” five years ago, he didn't say goodbye. “The conversation isn't ending," Stewart said.

Stewart is now picking it back up with “Irresistible,” his second film as writer-director, following 2014's “Rosewater,” and an extension of many of the things that Stewart talked about, satirized and debated in his 16 years hosting “The Daily Show.”

The movie, which Focus Features will release on demand Friday, is about a mayoral election in small-town Wisconsin that draws big-time strategists of each party (Steve Carell, Rose Byrne) along with enormous amounts of money and a media circus. A satire in the mold of Preston Sturges, it's American politics in microcosm.

But a lot has changed since Stewart ceased being such a regular public presence. In an interview from the home in New Jersey that Stewart shares with his wife and two children, the 57-year-old reflected on some of the turbulence in politics that has followed his nightly engagement.

But he mostly stuck true to his familiar principles: that the country is less right vs. left than it seems, that the electoral industrial complex is a destructive force and that America is stronger than some give it credit for. Said Stewart of Trump: “The idea that this is the guy that takes us down is something I cannot comprehend."

AP: There's clearly connective tissue between your film and “The Daily Show," where campaign finance reform was often a subject. This is surely the big-screen debut of your former guest, Trevor Potter, former chairman of the United States Federal Election Commission.

AP: You regularly tried to bridge the divisions of the country through sanity and common sense on “The Daily Show.” Those divisions have only grown during the Trump administration, some might say perilously so. Do you still believe in a middle ground?

STEWART: We certainly did a couple of things that pointed to: Look, it doesn’t seem like we’re as divided as they say we are. You try not to buy into the artificiality of it, but, yes, the divisions get much worse. But some of that is because of the permanence of it. That’s not to suggest that those divisions are real or don’t exist. But the permanence of it means there’s no time for makeup sex. The next election starts the next day. There’s just too much money. You’re in this permanent cycle that just entrenches and solidifies whatever those very real differences of opinion may be. The way I look at is: An argument becomes a feud and a feud becomes a war.

AP: Do you wonder if we’re outside of that cycle right now? Some see the future of the country riding on the election in November.

STEWART: It always feels that way to some extent because it’s correct. The future of the country is riding on every election. But I don’t think it’s as black and white, that if it goes this way, the country survives, and this way it doesn’t. I still believe in resilience. I love this country and the idea that this is the guy that takes us down is something I cannot comprehend. I cannot comprehend that we’re not able to withstand this. I don’t put that much faith in one man. I feel like at this point the country is a child alternating between parents who hate each other. We’re spending time at Dad’s or Mom’s house right now, but at some point we’ll get to go to the other parent’s house. At a certain point, the fever will break. That’s my hope. You see throughout history the pendulum swinging. I was alive in the ’60s and ’70s. I don’t recall that being a picnic.

AP: I know you don’t miss having a show, but does something like the turnout at Trump's recent rally in Tulsa make you want to tell a few jokes about it?

STEWART: Uh, I told a lot of jokes. I’m sure it would be the same thrill of, like, a old-timer’s game. Go back out there and then me and Minnie Minoso and Al Leiter will get there together. Mike Piazza is a little young to be doing it now, but he’ll come out and crank five home runs. I view it from that regard. I don’t sit at home and go: “Oh, my God, this is absurd. I’d love to do it.” One of the things that made me want to do this movie was the redundancy of the absurdity. I mean, for God’s sake, Eric Trump was out there in Tulsa the day after Juneteenth in the city that was one of the worst racist massacres in the history of the country, and he’s yelling about: "We’re going to be able to say Merry Christmas again.” The absurdity of that. I can’t tell you how many “War on Christmas” stories that I’ve done. It’s all just the Eagles getting together and playing the old hits. Trump doesn’t respond to the moment. He doesn’t even think of the moment. He’s just got one song, and he just plays it over and over and over again.

AP: You see that kind of noise as the problem.

STEWART: We’re allowing the absurdity of all this to consume what could actually begin to solve these problems. Sometimes you look at geopolitical situations and it doesn’t seem that insane to be able to solve it. You realize it’s because solving it doesn’t benefit the powers that be. Nothing sells like an enemy. The point of this movie isn’t to say Democrats and Republicans are the same. They’re not the same. But they’re both playing on a Superfund site. Whatever reindeer games are going on are held on a Superfund site, and if we don’t clean up the Superfund site, we don’t have much of a chance to see the distinctions between the two things.

AP: Is Citizens United the turning point to you?

STEWART: It was an escalation in an already running battle. But it’s really about this system that has its own gravitational force that begins to grow larger. It’s like if there’s a tropic depression forming in the Gulf and you follow it until you realize it’s going to consume everything in its path. It’s about that system that has only grown larger, more powerful and, I think, destructive.

AP: This is the second film you've written and directed. Are you enjoying it?

STEWART: When you spend so much time doing something that’s more ephemeral, the ability to work on something over a period of time and craft it a little more distinctly is more satisfying. It’s also a little more nerve-wracking, too. It’s sort of the difference between being a short-order cook and preparing for a gala.

At one point in “Irresistible,” Jon Stewart’s new political satire, a cable news anchor tosses a question to an absurdly overstuffed panel of 12 analysts, each in their own little “Brady Bunch” square. Immediately, they start shouting at once, drowning each other out.