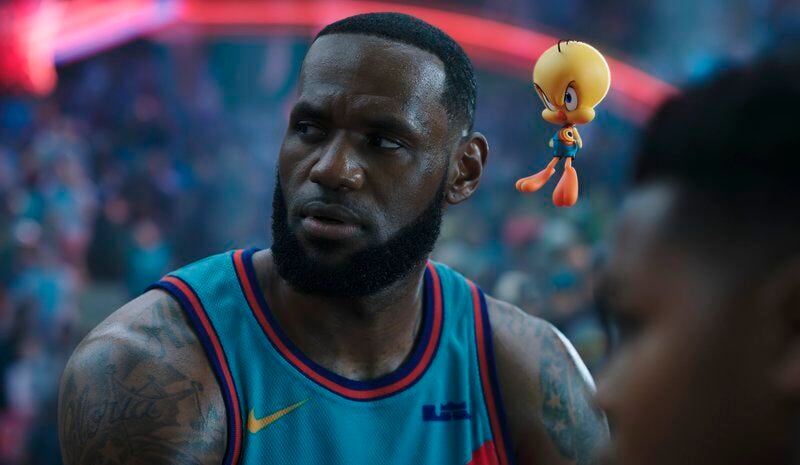 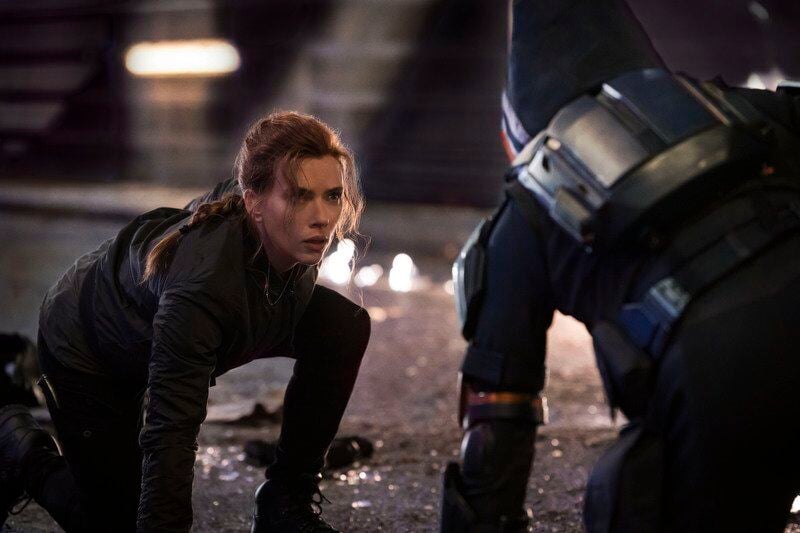 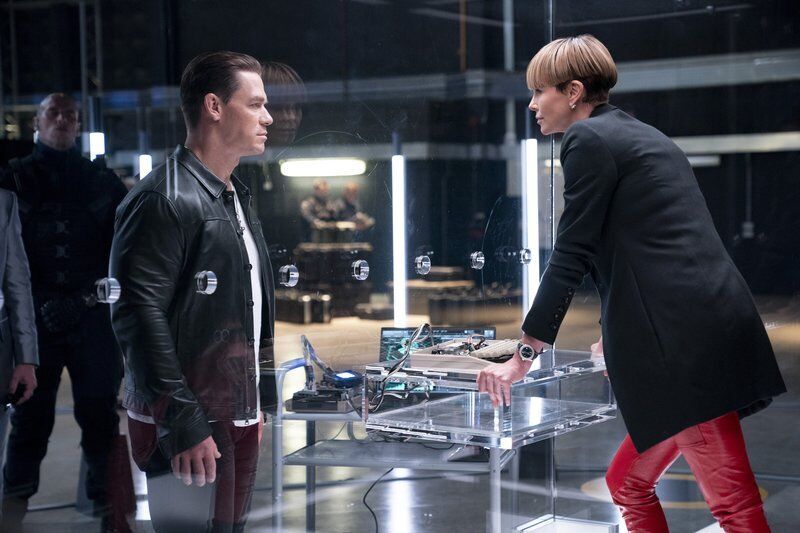 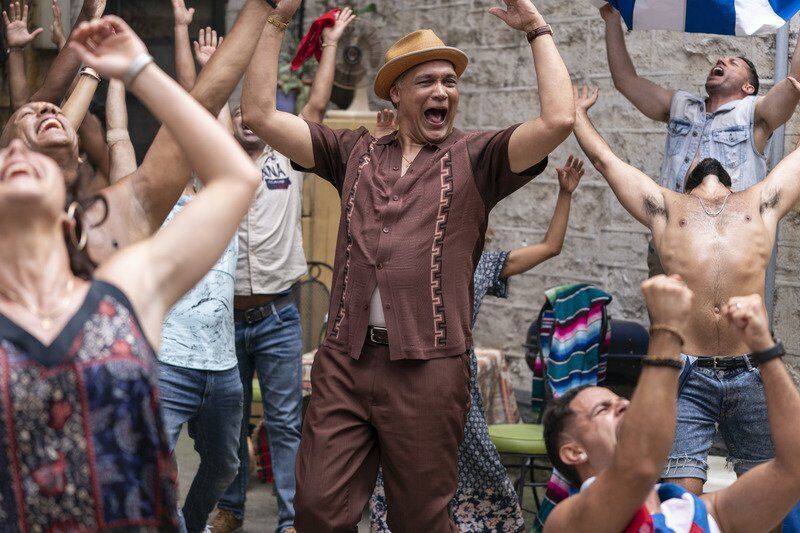 Jimmy Smits in "In the Heights" (Macall Polay/Warner Bros. Entertainment via AP) 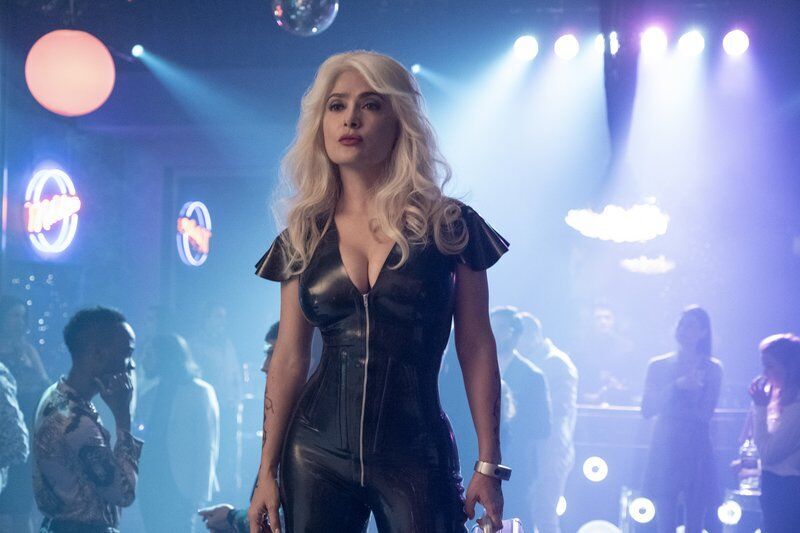 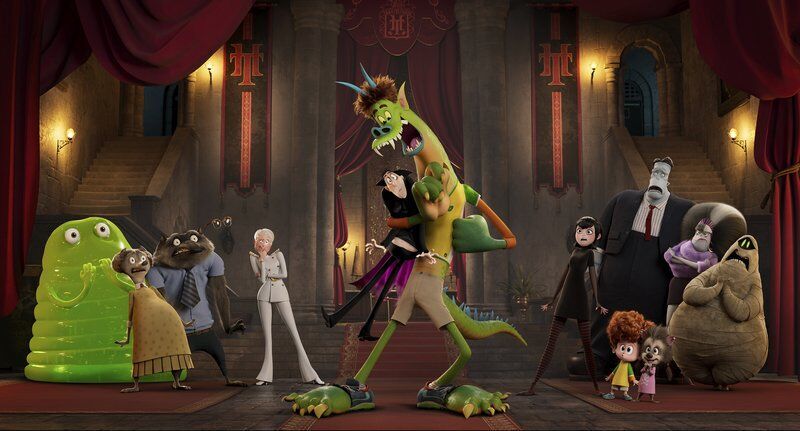 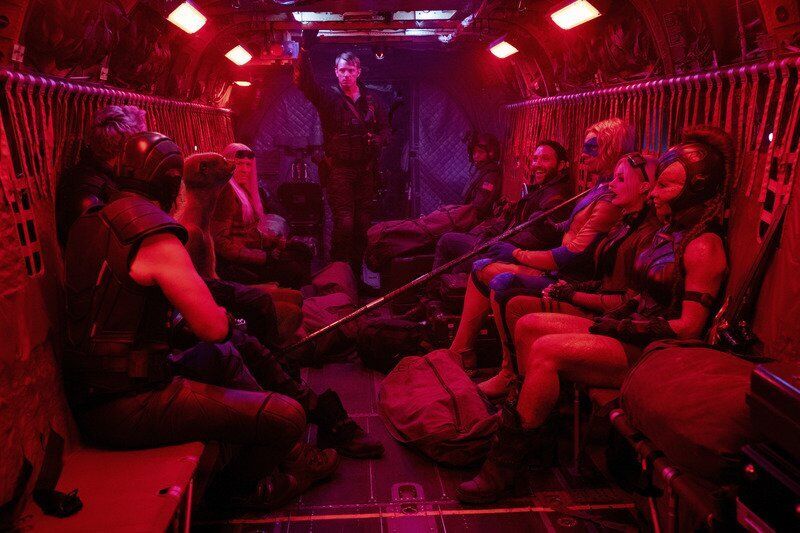 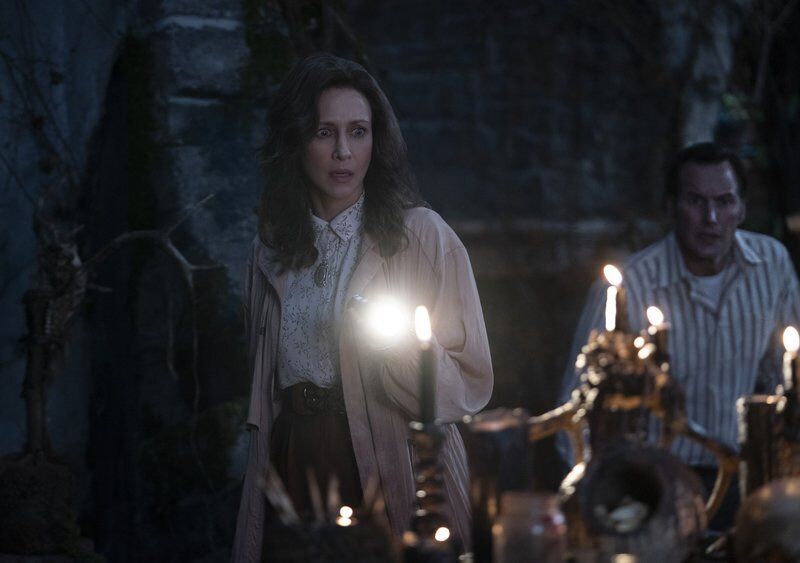 Vera Farmiga and Patrick Wilson in "The Conjuring: The Devil Made Me Do It" (Ben Rothstein/Warner Bros. Entertainment via AP) 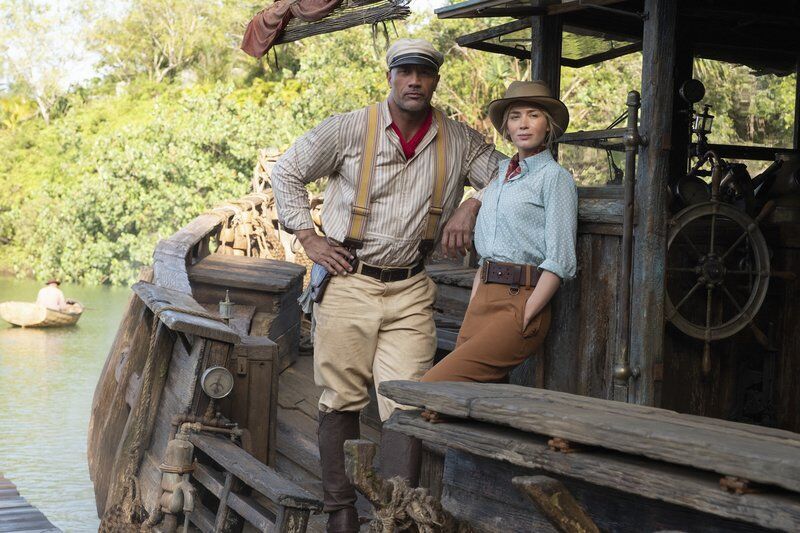 Peter Rabbit is voiced by James Corden in "Peter Rabbit. 2: The Runaway." (Sony Pictures via AP) 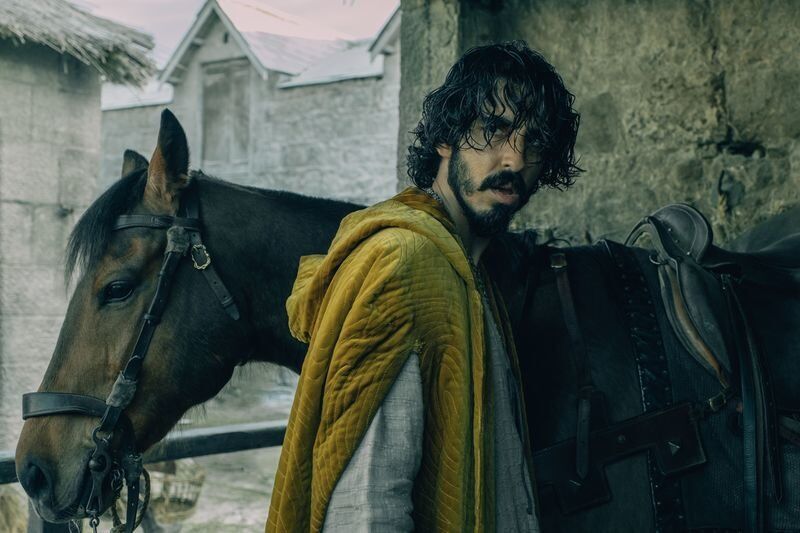 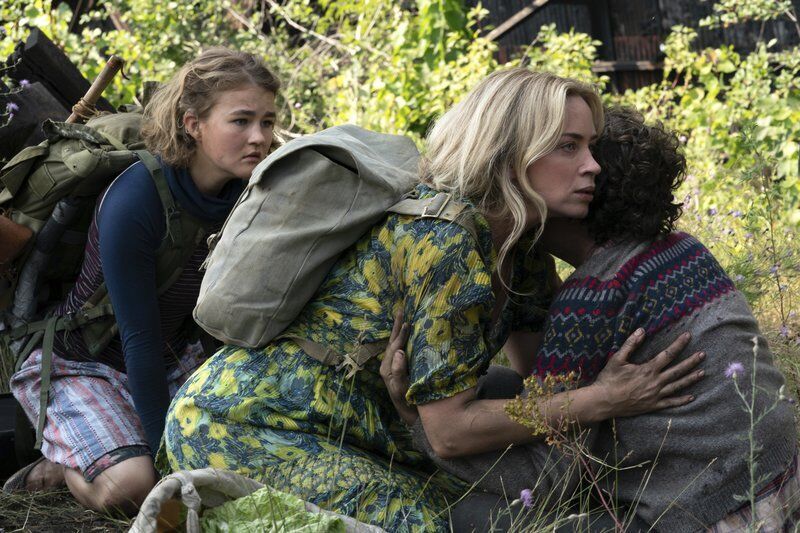 From left are Millicent Simmonds, Emily Blunt and Noah Jupe in a scene from "A Quiet Place Part II." (Jonny Cournoyer/Paramount Pictures via AP) 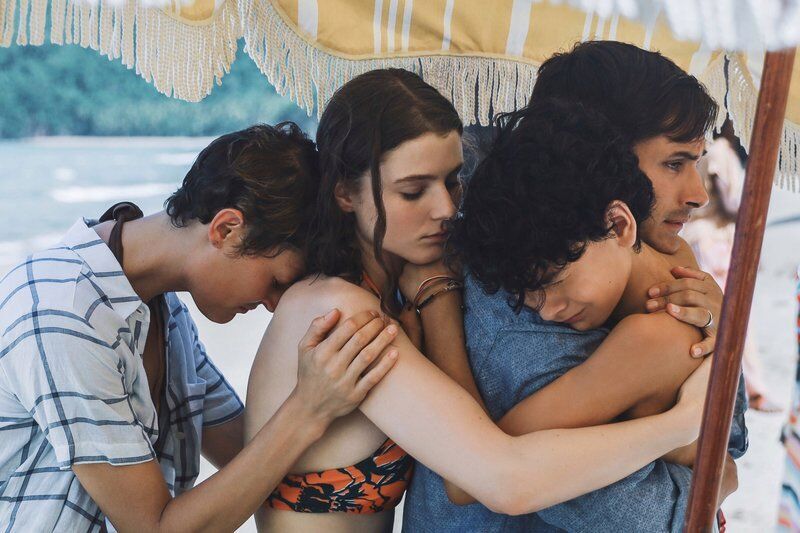 From left are Vicky Krieps, Thomasin McKenzie, Gael Garci­a Bernal and Luca Faustino Rodriguez in a scene from "Old." (Universal Pictures via AP)

Jimmy Smits in "In the Heights" (Macall Polay/Warner Bros. Entertainment via AP)

Vera Farmiga and Patrick Wilson in "The Conjuring: The Devil Made Me Do It" (Ben Rothstein/Warner Bros. Entertainment via AP)

Peter Rabbit is voiced by James Corden in "Peter Rabbit. 2: The Runaway." (Sony Pictures via AP)

From left are Millicent Simmonds, Emily Blunt and Noah Jupe in a scene from "A Quiet Place Part II." (Jonny Cournoyer/Paramount Pictures via AP)

From left are Vicky Krieps, Thomasin McKenzie, Gael Garci­a Bernal and Luca Faustino Rodriguez in a scene from "Old." (Universal Pictures via AP)

After more than a year of benching its biggest spectacles, Hollywood is ready to dazzle again.

From “F9” and “In the Heights” to “The Suicide Squad” and “Black Widow,” there will be a steady stream of blockbusters populating multiplexes across the country for the first time since March 2020. For streaming-weary audiences, the promise of air conditioning, popcorn, soda fountains, 60-foot screens and state-of-the-art sound could be a welcome respite from the living room and virtual watch parties. Not to mention the ever-romantic concept of the shared experience.

For beleaguered movie theaters, it's not a moment too soon.

The modern summer movie season, which runs from May through Labor Day, regularly accounts for over $4 billion in revenue and makes up around 40% of the year’s grosses. Last year, summer earnings were $176 million, down 96% from 2019. Although theaters have been ramping up operations for a while, this summer will prove to be the biggest litmus test so far about whether habits have changed irrevocably during the pandemic.

In some ways, the calendar looks like a do-over of last summer. Many of the most anticipated releases were supposed to come out a year ago, including John Krasinski’s “A Quiet Place Part II,” up first on May 28; the big screen adaptation of Lin-Manuel Miranda’s Tony-winning “In the Heights” (June 11); the ninth installment of the “Fast & Furious” series, “F9” (June 25); Marvel’s “Black Widow” (July 9), starring Scarlett Johansson; the Emily Blunt and Dwayne Johnson action adventure “Jungle Cruise” (July 30); and Nia DaCosta’s “Candyman” reboot (Aug. 27).

“In the Heights” director Jon M. Chu had to convince Miranda that it was worth it to wait for a theatrical release. Miranda wanted to get his joyous musical about a bodega owner, Usnavi (Anthony Ramos), and his friends in Washington Heights out to people immediately. But Chu knows just how important a global release is for films with underrepresented casts. Like “Crazy Rich Asians,” “In the Heights” features unknowns in key roles who are poised for a breakout given the right platform.

“We had big dreams for this,” Chu said. “To be able to do it on the biggest scale possible meant so much.”

And it’s not the only blue-sky blockbuster in the bunch. The “Fast & Furious” series has always been about creating a fun theatrical experience, and “F9” not only brings back a fan favorite — Sung Kang’s Han — but also literally sends cars into space. It’s expected to be one of the season's biggest hits.

“Whenever I get together with Vin (Diesel) and everybody to make these movies, we’re not even talking about the plot or anything like that, but the feeling. I just remember as a kid in the summer saving enough money to go to the movies to share that experience with a bunch of strangers,” director Justin Lin said. “When that moment hits and everyone’s laughing or cheering together, it is magical.”

Before the pandemic, going to the movies in the summer was a ritual. Audiences made up for last year by screening retro summer hits at drive-ins. Now it's a wild card whether the promise of an “event film” will motivate audiences back to theaters, especially if something is also available to watch at home.

Those looking for a more R-rated experience can thank James Gunn, who made movie stars out of the once obscure “Guardians of the Galaxy” and now is out to do the same for the “misfit, Z-grade supervillains” of “The Suicide Squad.” He had his pick of DC characters and turned down Superman for Margot Robbie’s Harley Quinn, Idris Elba’s Bloodsport and John Cena’s Peacemaker.

Gunn looked to one of his favorite genres for inspiration: the 1960s war caper. Think “The Dirty Dozen” and “Where Eagles Dare.”

“To reinvigorate that genre just using these crappy supervillains as the protagonists was very appealing to me,” Gunn said.

There are many other options too, including a host of big-name documentary titles, from Morgan Neville’s “Roadrunner: A Film About Anthony Bourdain” (July 16) to Peter Jackson’s “The Beatles: Get Back” (Aug. 27). There are family films, like “Peter Rabbit 2: The Runaway” (June 18) and “Hotel Transylvania: Transformania” (July 23), and horrors like “The Conjuring: The Devil Made Me Do It (June 4) and “Don’t Breathe 2” (Aug. 13).

You can see Matt Damon try to save his daughter in the drama “Stillwater” (July 30) or watch as Gael García Bernal starts to age rapidly in M. Night Shyamalan’s “Old” (July 23). Ryan Reynolds is in two big action flicks, “The Hitman’s Wife’s Bodyguard” (June 16) and “Free Guy” (Aug. 13). There’s even an epic Dev Patel-led take on a classic Arthurian legend, “The Green Knight,” coming July 30.

“I’m really glad that our movie is one of the ones that was held back because I really I want audiences to get a chance to see it on the big screen,” said “The Green Knight” director David Lowery. “It was obviously meant to be seen that way but also it’s a strange movie and I think that the idea of having that experience in a cinema with other people is going to be really, really exciting, especially after a year away from the big screen.”

Some studios have been cautiously rolling out bigger films to decent results lately, like “ Godzilla vs. Kong.” But after seven weeks, even that monster sock 'em up is still shy of cracking the $100 million mark domestically. And it’s unclear what the new benchmarks for success will be or if any movie has a chance of hitting anything close to pre-pandemic expectations. The last “Fast” movie opened to $98.8 million in 2017. “Black Widow” was once pegged for at least a $90 million launch. So far this year, the biggest domestic opening was just over $30 million.

For moviegoers, it’s also become hard to keep tabs on ever-shifting dates, delays and multi-platform releases. Some summer-ready titles, like “Top Gun: Maverick” and the new James Bond, “No Time to Die,” are waiting until later in the year to debut. “Jurassic World: Dominion” pushed to 2022. And changes are still being made as some offload titles to streaming services. Sony sold its Camilla Cabello and Billy Porter-led “Cinderella” to Amazon Prime and its Kevin Hart as a single dad pic “Fatherhood” to Netflix.

Even the films with theatrical debuts will have either unique hybrid release plans or shortened theatrical windows. All Warner Bros. titles, including “In the Heights,” “The Suicide Squad” and “Space Jam,” will be available free for HBO Max subscribers for 31 days, as well as in theaters. Most Disney movies, including “Cruella” (May 28), “Black Widow” and “Jungle Cruise,” are opening both in theaters and on Disney+ as a premium $29.99 rental. Their Pixar title “Luca” is going straight to Disney+, free for subscribers, on June 17. And the Sundance breakout “CODA” is getting a simultaneous release in theaters and on Apple TV+.

For theaters and studios, the unknowns are many. Are movie theaters even on people’s reopening priority lists? Will there be a $100 million opening weekend any time soon? Will there ever be a $250 million opening weekend again? The filmmakers aren’t trying to concern themselves with that. But everyone is feeling emotional that moviegoing might finally become normal again.

“I think about it all the time,” Gunn said. “I can’t wait to sit in a theater with a group of people and watch films again. It is a true joy in life. It’s a magical space for me and has been since I was a very little boy.”

A rundown of notable films coming out this summer: