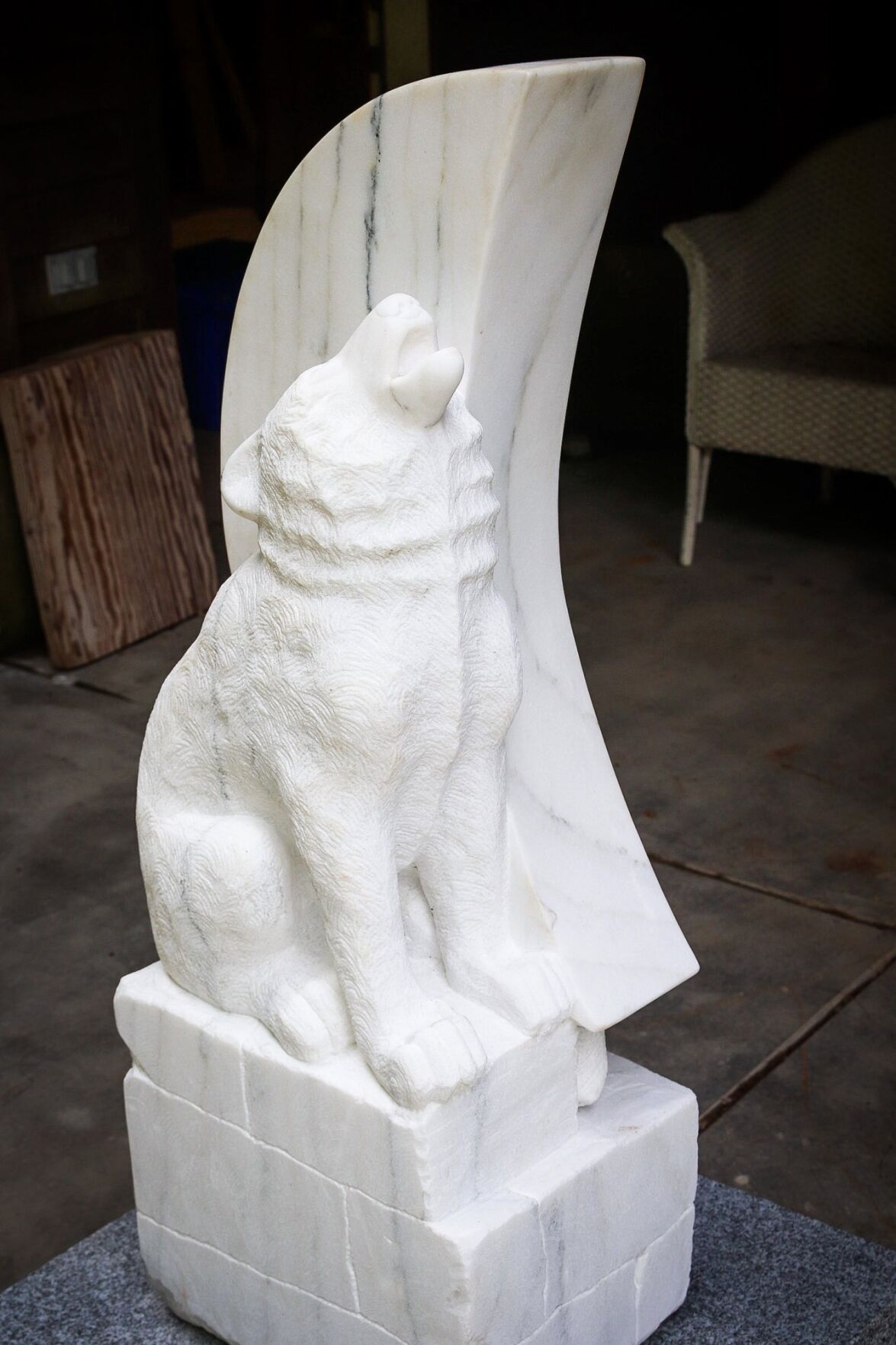 “Howling Wolf” by David Adilman of Andover is appearing in The Flying Horse Outdoor Sculpture Exhibit at the Pingree School in Hamilton.

“Perseverance,” a mosaic sculpture by Cassie Doyon of Haverhill, will be exhibited at the Flying Horse Outdoor Sculpture Exhibit at Pingree School in Hamilton.

“Howling Wolf” by David Adilman of Andover is appearing in The Flying Horse Outdoor Sculpture Exhibit at the Pingree School in Hamilton.

“Perseverance,” a mosaic sculpture by Cassie Doyon of Haverhill, will be exhibited at the Flying Horse Outdoor Sculpture Exhibit at Pingree School in Hamilton.

David Adilman studied rocks as a geologist long before he ever chiseled one into a sculpture.

The Andover resident, whose work will appear in the Flying Horse Outdoor Sculpture Exhibit in Hamilton from Sept. 4 to Nov. 28, has spent the majority of his 30-year career in environmental geology, helping to clean up contaminated groundwater in bedrock.

But in addition to traveling all over America for his job, Adilman took time to tour Europe in his mid-twenties, where he saw Auguste Rodin's "Burghers of Calais" in Paris.

The famous sculpture depicts an incident from the Hundred Years' War, when six men agreed to sacrifice themselves to save their besieged city.

"It was larger than life size," Adilman said. "You're walking along and all of a sudden, bam, it just sort of brings you back to a period of time that's a long time ago, and you looked at their faces and expressions and, wow, that's quite an act they did."

Inspired to try his own hand at sculpture, Adilman started working with clay in the mid-90s, while studying technique at the Boston Center for Adult Education, The Carving Studio and Sculpture Center in Vermont, and at The DeCordova Museum in Lincoln.

He eventually started to sculpt stone, and will be represented at the Flying Horse Exhibit by "Howling Wolf," which he created from a piece of Danby white marble from Vermont.

"I bought this beautiful piece," Adilman said. "I wanted to try something different. I've been wanting to try an animal sculpture. I was obsessed with wolves for a few days, after I saw some pictures someone had in their home. I got a couple of drawings of a howling wolf and the moon and started hitting it."

He cut out the rough shape with a saw then finished the rest of "Howling Wolf" with chisels.

"This piece, I drew it out completely to scale before I even started," Adilman said. "I had the full rendering to scale when I started cutting. I had some idea of where I was going."

He initially sculpted with soft stones, such as limestone, before moving on to marble and then granite, which is extremely hard and can only be carved with saws and grinders. But Adilman is drawn to the mineralogy of granite.

"There are certain minerals and impurities in the rock, secondary minerals and colors," he said. "I've been doing Cape Ann granite lately, which is greenish. There's a place in Wakefield called Old New England Granite where I've been buying a lot of granite."

Adilman, who participated in his first exhibit in 2015, plans to work in clay again soon, but his last eight sculptures have been fashioned from granite.

His love of stone is expressed in surfaces that are left unfinished, sometimes even raw and uncarved, drawing attention to the inherent values of the material.

"I totally gravitate to pieces that are leaving rough stone," Adilman said.

This is the 12th year that the Flying Horse Outdoor Sculpture Exhibit has been held on the grounds of the Pingree School. Access was limited last year because of COVID-19, but this year visitors may once again tour the works seven days a week, during daylight hours.

The public is also invited to a reception with the artists on Sunday, Sept. 19 beginning at 1:30 p.m. Honorary Chair Daniel Joseph, founder and director of the Pickup Music Project, will speak.

More than 50 sculptures will be featured at Pingree, including "Butterfly in Flight" by Nancy Schon, who is well known for her "Make Way for Ducklings" sculptures in Boston Public Garden.

The sculptors at this year's exhibit hail from as far away as Washington state, but most live in New England. The latter include Cassie Doyon, who has lived in Haverhill for 22 years, but grew up in Gloucester.

That gave her plenty of opportunities to collect sea glass, which Doyon incorporated in a mosaic image of a horse that won second place in an art contest when she was in third grade.

From that time forward, mosaics were "always on the back of my mind," Doyon said, even as she worked in clay, sculpture and other media after studying at Salem State, then at the School of the Museum of Fine Arts and Tufts University.

Her interest in mosaics was revived in 2014, when her own daughter was in college in Barcelona, where Doyon visited a park designed by Catalan architect Antoni Gaudi, who featured mosaics in his structures.

"That just did it for me," Doyon said.

She started off by making functional pieces, such as mosaic mirrors, and still includes sea glass in her work.

"I would use the beach glass that I found around the world," Doyon. "I would collect beach glass everywhere I traveled and incorporated that into the frames of mirrors for a while. From there, I started to get ideas off the internet, and became a member of the New England Mosaic Society, and started taking classes, and from there it exploded and I became obsessed."

Her two-dimensional works can feature either figurative or abstract styles, and Gloucester still inspires her vision of the world.

"The ocean has always been a big draw for me," Doyon said. "If I do representational work, the ocean is usually a theme."

Doyon said she plans two-dimensional works in advance, but three-dimensional works like "Perseverance," which she is exhibiting at "Flying Horse," are usually improvised. She has written that her abstract works are often inspired by tribal art.

But her works in a contemporary style still rely on traditional mosaic methods like andamento, which is a term that doesn't have a good equivalent in English, Doyon said, but has to do with arranging pieces in a certain pattern.

"It means, in a way, to have the tiles flow, to go in a direction," she said. "It's all about placement and having a flowing aesthetic, and it was used in ancient mosaic art."

The materials used to create the patterns in "Perseverance," which are applied to a styrofoam base that is covered with fiberglass mesh tape, come from a range of sources.

"I use a lot of different types of material in mosaic art," Doyon said. "I like variety, a lot of color. So I could use, in one piece, ceramic tile, and stained glass. There's a material made in Italy, smalti, it's composed of pigmented glass and it can be cut into tile. It's a very traditional mosaic material."

The sculptures of Eric Olson, who has taught math at Pingree for 26 years, usually embody mathematical concepts or problems.

"Squaring the Sculpture," at the Pingree exhibit, illustrates what he describes in the catalog as "one of the three famous unsolvable problems from Greek antiquity."

Squaring the circle, which Olson defines as "the construction of a square with an area equal to a given circle," is now mostly female as "a common expression for something of impossible difficulty."

Olson, who will soon be moving to West Newbury from Newburyport, majored in both math and art in college, and teaches a winter course at Pingree called "The Art of Mathematics."

"It's a chance to explore interesting ways that other cultures have used math," Olson said. "Tibetan mandalas are based on circles and geometry. Islamic art is amazing in its geometrical sophistication."

The intricate, interlocking designs in the Alhambra, a Moorish palace in Spain, inspired the perspectival puzzles created by M.C. Escher in his drawings, Olson said. They study Escher's drawings in "The Art of Mathematics," and the students also do original projects.

"We primarily do two-dimensional work, but I have had kids do three-dimensional work," Olson said. "I get things that are informed by math but visually interesting. That's what I love to do."

In addition to showing work at Pingree, Olson has been contributing works to Outdoor Sculpture at Maudslay Park, which opens this year on Saturday, Sept. 11, for 22 years.

"Last year was a kind of geometric soccer ball thing with 32 shapes," he said. "This was 20 triangles that make a thing that looks like a soccer ball. It's kind of math-y. It goes back to Plato, who thought that matter was made up of geometric shapes. He thought molecules were made up of triangles."

Olson has also created sculptures based on fractals, which he said are mathematical shapes that exhibit "self-similarity."