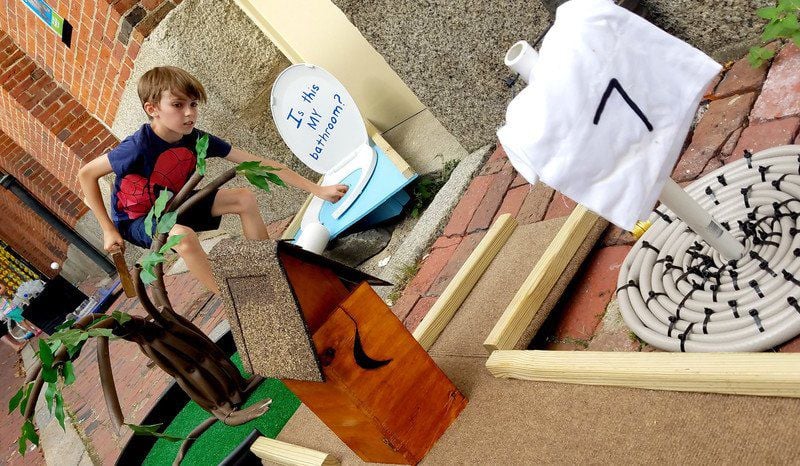 DUSTIN LUCA/Staff photoEight-year-old Holden Czahor, of Salem, retrieves a ball he knocked in at the end of hole 7, which addresses transgender bathroom rights. The hole is part of a nine-hole course public art display around Old Town Hall that use mini-golf to confront players with hard-to-answer questions. 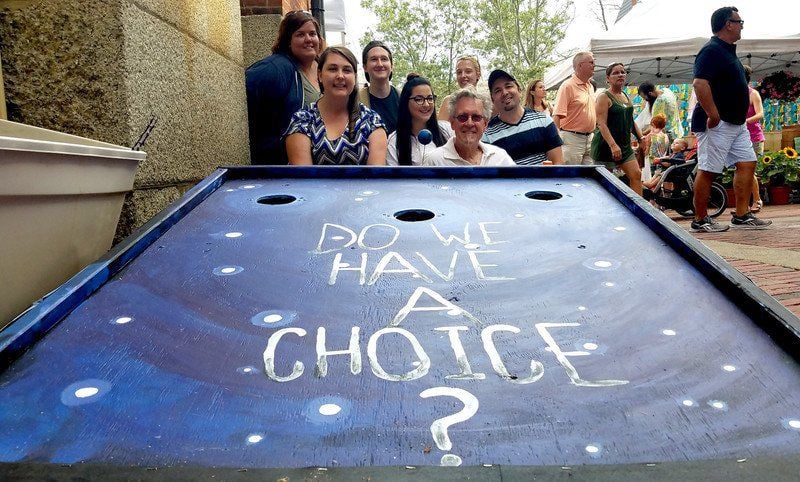 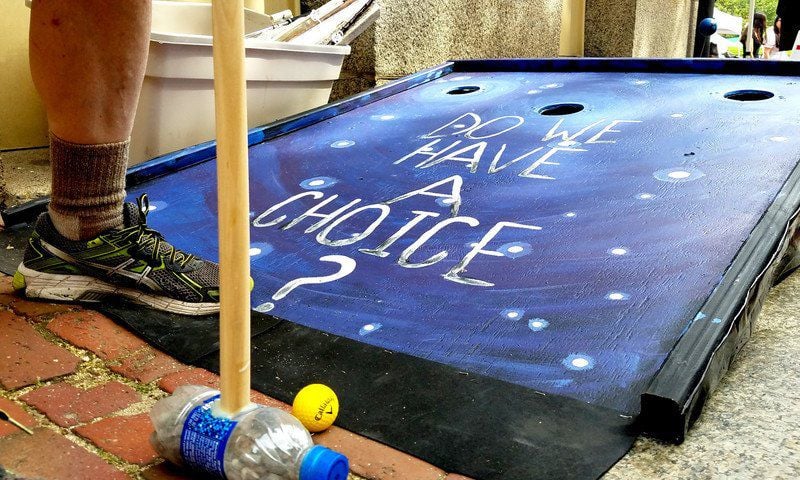 DUSTIN LUCA/Staff photoEight-year-old Holden Czahor, of Salem, retrieves a ball he knocked in at the end of hole 7, which addresses transgender bathroom rights. The hole is part of a nine-hole course public art display around Old Town Hall that use mini-golf to confront players with hard-to-answer questions.

SALEM — Most games of mini-golf feature bright colors, large animals and some challenging obstacles on each hole. But a game set up in downtown Salem does even more — it packs a punch.

Do we have a choice?

Who do you trust?

Is this my bathroom?

All these questions, and more, are being raised by a nine-hole miniature golf course set up around Old Town Hall at Derby Square. The display, brought downtown as public art, is scheduled to run through the end of August.

The display is the end-product of a seven-day summer course held at Salem State University and taught by Ken Reker, a professor of art and design at the university.

"Each of the students created a hole with a question in mind — something universal or broad that might elicit some conversation about the conversations going on," Reker said.

Kaity Martin, a student who took the course, put together a recycling-themed hole with plastic bottles across the board asking a simple, four-word question: "Where are we headed?"

"The amount of waste we have as people — are we going to reach a limit? Is it too late? Is it reversible? Irreversible?" Martin said those were some of the questions she wanted to address.

Liza Provencher admitted she isn't very politically charged, but in her contribution to the course, she came up with a question striking at the core of one of the country's most heated discussions this year — transgender bathroom rights.

The hole opens with an outhouse. "There's no sign, ladies, mens, other," Provencher explains, and then it leads to an open area with a tree. "There's no label behind a tree."

"There's no label on a toilet seat," Provencher continued. "All bathrooms are for all people."

Jess Ferrairo, another student in the course, had a hole designed in the shape of a tie. A wall of newspaper headlines was woven through the middle of the tie, and a mock-television set stood at the beginning of the hole, bearing the likeness of the Fox News network's logo and asking, "Who do you trust?"

"I started thinking about news media," Ferrairo said. "So many people take what they see on televised media and don't investigate it further. They take it for what it's worth."

All of the topics addressed by the mini-golf course are politically charged, but the goal is to try to lighten them up in the interest of having spirited discourse about them, according to Provencher.

"Some people take things way too seriously," she said. "This is a way to get those serious topics in a more lighthearted way, and not hit you over the head with things."

For Deborah Greel, the city's public art planner, the mini-golf course is another example of art sparking conversation.

"Art has always created discussions," Greel said. "Sometimes, you have to be somewhat provocative to get that to the surface, for people to start talking."

The location, meanwhile, was specifically selected for the art display given the current discourse playing out at a national level, according to Reker.

"Since it's an election year, there (are) a lot of important issues around this," the professor said. "We decided we'd create a piece of work around Old Town Hall, which is a site for meetings and conversations both colloquial and serious."

The display was publicly unveiled on Thursday and is scheduled to be taken down Sept. 1, according to Reker.

Golf clubs and balls will be available at the course from 4 to 8 p.m. each day, Greel said.

Greel hopes, as do those behind the art, that mini-golf can foster healthy conversation at a time when the political climate lacks it.

"This is what they wanted to do," she said. "You can play through and have a great time, or you can start the game and say, 'What does that mean to me?'"