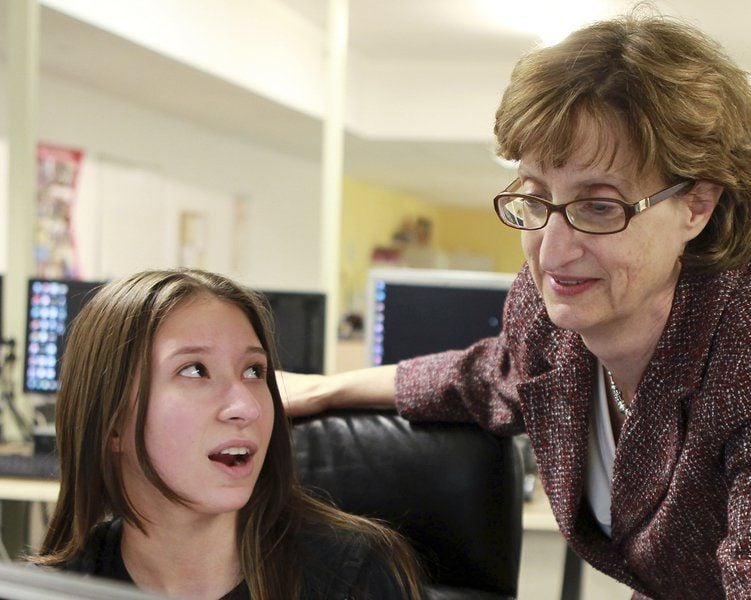 Linda Saris, executive director of LEAP for Education, works with Lisa Creech, 17, of Peabody. The program uses technology to help students succeed in school and college. 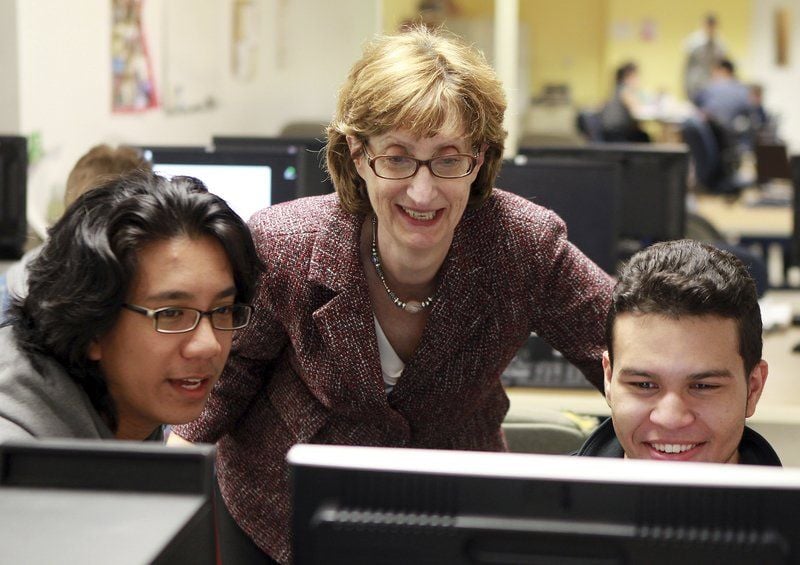 Linda Saris, executive director of LEAP for Education, looks on as Allen Hernando, left, and Kevin Melo of Salem, both 18, work on computers. 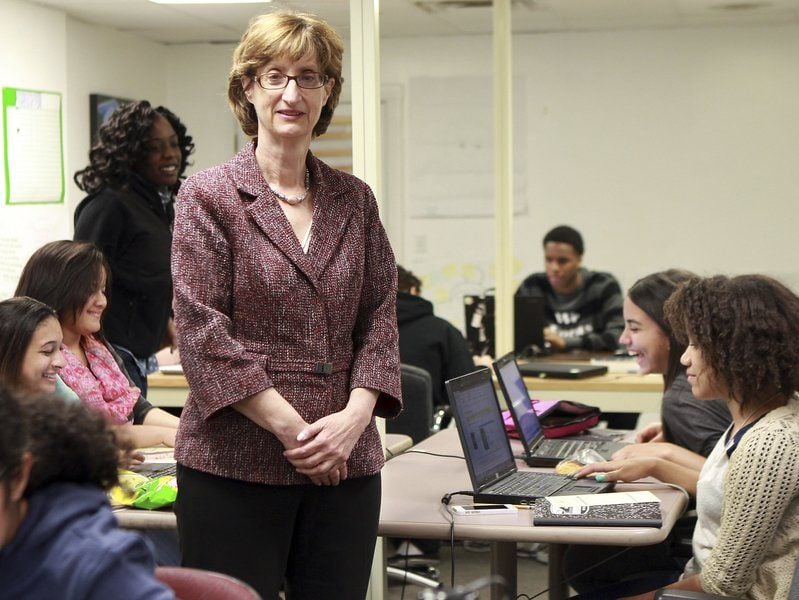 Linda Saris, executive director of LEAP for Education, works with Lisa Creech, 17, of Peabody. The program uses technology to help students succeed in school and college.

Linda Saris, executive director of LEAP for Education, looks on as Allen Hernando, left, and Kevin Melo of Salem, both 18, work on computers.

SALEM — A framed poster of a few of America’s great successes — Abe Lincoln, FDR, Truman and Eisenhower — hangs on a wall at LEAP for Education, a Salem-based nonprofit group that helps area kids succeed in school.

But the point of the poster isn’t the men’s success. It’s the failures they endured before success.

Eisenhower was passed over numerous times for military leadership positions. Truman opened a hat shop that flopped. FDR flunked out of law school. And apparently Lincoln, before he saved the Union, was a terrible postmaster.

“If at first you don’t succeed, you’re in good company,” the poster reads.

Try. If you fail, learn from the failure and try again. This philosophy has guided hundreds of students over the past 12 years at LEAP for Education (the LEAP acronym stands for learn, explore, aspire, pursue), which helps low-income and first-generation American students to succeed in middle school, high school and college.

“We try to use this approach in everything,” said Linda Saris, executive director. “Learning to problem-solve is a skill needed in life and in the working world.”

Now, after more than a decade of helping students to succeed, LEAP for Education is taking its own journey to independence. Formerly known as Salem CyberSpace, the group changed its name last year to reflect its growing academic focus. This year, the group is stepping out from under the umbrella of North Shore Community Action Programs, a nonprofit that oversees a variety of area social service programs.

“It’s been a big move for us, but we’re excited about the growth,” Saris said.

A chance to grow

The move, which has been smooth and amicable, Saris said, will allow LEAP to expand fundraising. The group also recently extended its services into Gloucester, which is not in NSCAP’s service area, she said.

“They’re a wonderful organization,” MacNeil said. “They take children who wouldn’t consider college and say, ‘Of course you can go to college.’ And their success rate is through the roof.”

To date, all of the students who have participated in LEAP for Education have stayed in high school and enrolled in college (one student hasn’t enrolled yet, but intends to soon).

LEAP helps low-income students in Salem, Peabody and Gloucester schools. The group has an annual budget of $600,000, of which 25 percent is government grants and 75 percent is raised through private donations, such as philanthropic foundations and individual contributions.

Eight full-time and five part-time staff members teach about 300 students annually in a range of life and academic skills, such as preparing for the SAT, saving money and supporting their neighborhoods with service projects.

The group also encourages students to attend college — graduates have gone on to state and private schools, including Bucknell and the University of Pennsylvania — and offers financial aid advice and help with college applications.

Once in college, the students continue to receive weekly counseling through sophomore year to address any issues that may arise, such as class workloads, transportation or buying textbooks. The group also holds family workshops to help parents learn how to support their children’s aspirations.

“I’ve seen a great deal of the hands-on work they’ve done,” said Steve Russell, superintendent of schools in Salem. “They’re a very strong partner of ours, and Linda (Saris) is a human dynamo. You can depend on her to get things done for kids. Many students in our community have her and LEAP for Education to thank for their success.”

While the program offers a wide variety of life and academic skills, it focuses on areas where American students are lagging behind other advanced nations: science, technology, engineering and math.

On a recent weekday, several tables at the organization’s Essex Street headquarters were loaded with hands-on science experiments, such as computer circuit boards and 3-D printer creations. On the other side of the room, a bank of computers stood ready for after-school homework.

Saris, who lives in Swampscott, began her career in the private sector in information technology, but left her job in 2002 to join the nascent Salem CyberSpace. Started by NSCAP, the program began as an Internet cafe in Salem’s low-income Point neighborhood.

Miguel Cruz credits the program with his success in school and work.

“I wouldn’t be where I’m at without them,” said Cruz, 25, who lives in Salem and works as a freelance illustrator and graphic designer.

Cruz’s family emigrated from the Dominican Republic when he was a child. In 2006, he found LEAP for Education through friends who liked to do homework at the organization’s headquarters. Tutors there helped Cruz bring up his high school biology grade from a D-minus to an A plus.

But Saris noticed his passion for art.

“In his spare time here, he was always doodling and drawing,” she said. “But he had never taken an art class.”

With Saris’ encouragement, Cruz enrolled in an art class during his junior year at high school and started thinking about art as a career, while Saris did the research on colleges.

“We had no idea how to get into an art school,” she said. “We found out Miguel needed a portfolio — charcoal, oil.”

Saris contacted an artist friend who helped Cruz create a portfolio, and Saris worked with him on the application and financial aid forms.

Her formula for success with students isn’t complicated, she said with a laugh: “I’m like a second parent. I’m a noodge.”

Cruz was accepted into Montserrat College of Art, which offered him a substantial scholarship. He graduated in 2013 with a bachelor of fine arts in illustration.

“I tell the kids, you can do anything you want in life,” he said. “It just takes the courage to step into it and the faith to walk through it.”