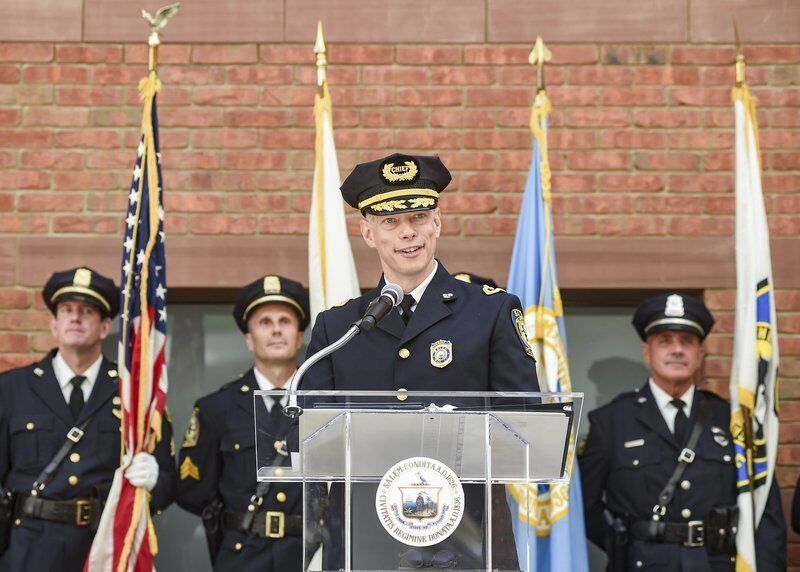 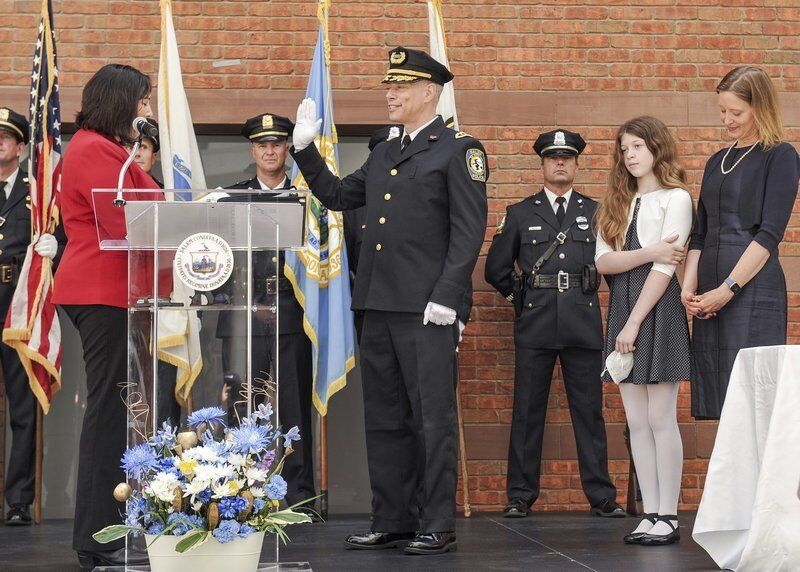 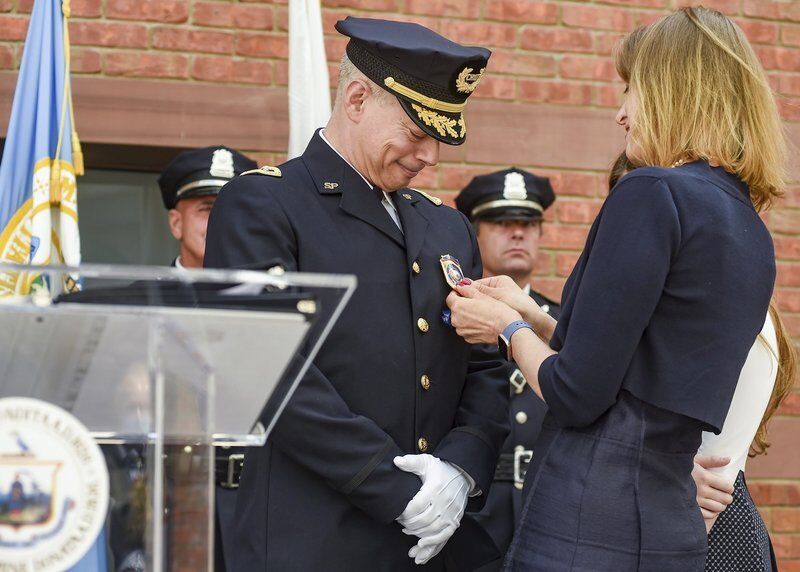 JAIME CAMPOS/Staff photoNew Salem police Chief Lucas Miller, left, watches as Jennifer Sale, his wife, pins a Salem Police Department badge on his jacket after Miller was sworn in as chief Tuesday during a ceremony at Peabody Essex Museum. 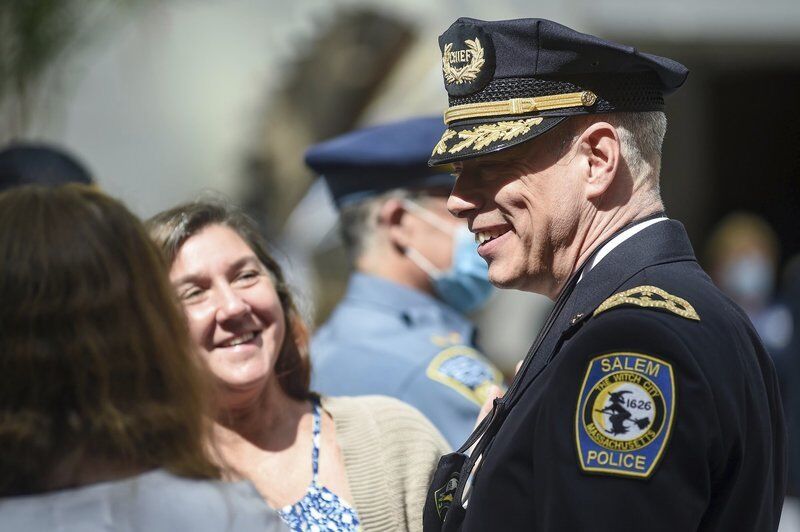 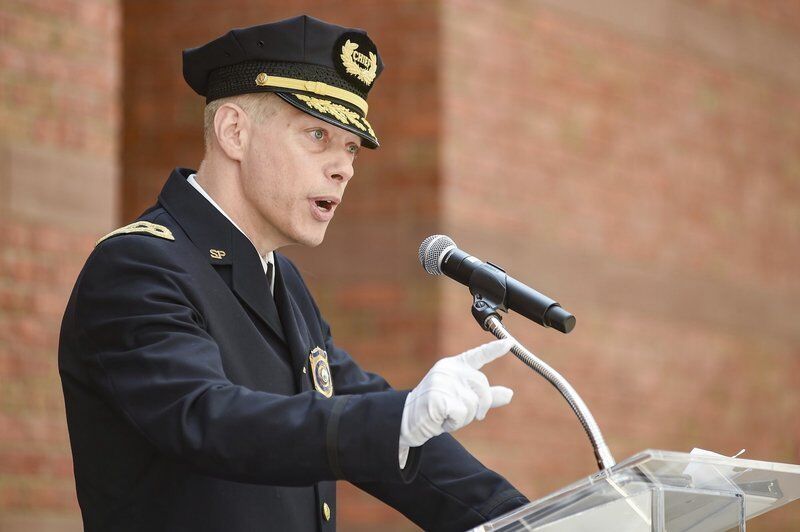 JAIME CAMPOS/Staff photoNew Salem police Chief Lucas Miller, left, watches as Jennifer Sale, his wife, pins a Salem Police Department badge on his jacket after Miller was sworn in as chief Tuesday during a ceremony at Peabody Essex Museum.

Miller, a 30-year veteran of the New York Police Department, was officially sworn in as Salem’s police chief Tuesday in a ceremony held at Peabody Essex Museum. The event was invitation-only due to the pandemic, and the audience was largely made up of police from Salem and around the region, as well as city officials. When Miller spoke, it marked the first time he formally addressed other members of the Salem police as their chief.

The leadership change in Salem comes as law enforcement faces unprecedented scrutiny amid civil unrest and calls for racial justice around the country.

Miller said the work of police “isn’t secret, and it isn’t a ‘necessary evil.’”

“Cameras — whether they’re held by bystanders or the press or worn by police officers — will show that 99.9% of the time, interactions with the public are as they should be: fair, respectful, and with their safety the highest priority,” he said

“But who will stop it?” Miller asked. “We will — police like us, police like you. You’ll stop excess force, unfair practices, and bias policing because you won’t tolerate it.”

In her remarks introducing the chief, Mayor Kim Driscoll said the coming years will present “many new issues in Salem that’ll confront the department as our city continues to grow and thrive. With these opportunities also come challenges of course, but Salem has never been a community that can get by with just a caretaker chief.”

At the same time, there’s no need for a caretaker either, Driscoll said.

“The department has positioned Salem to be at the forefront of responsible policing measures,” she said, “and I believe that Chief Miller possesses the acumen, experience and leadership to continue that work, aimed at helping ensure we are protecting and serving everyone in our community in an equal and just manner.”

Driscoll said she believes Miller “can build trust within our community and within the department and lead with transparency, accountability and safety in mind — safety of our officers and of our diverse array of community residents.”

Miller follows Mary Butler, the city’s first female police chief who retired last summer. Salem police Capt. Dennis King served as acting chief in the interim, but he did not apply for the permanent position. King was named last month as police chief in Marblehead.

Before coming to Salem, Miller was a detective squad commander in both the NYPD Detective Bureau and the Intelligence Bureau, as well as homicide supervisor, patrol supervisor, narcotics investigator, and community policing officer.

In closing, Miller leaned on the words of famous Naval Commander John Paul Jones: “Give me a fast ship, for I intend to go in harm’s way.”

“I trust Harbormaster (Bill) McHugh will cut me off if I make too many nautical references,” Miller said, smiling, “but Mayor Driscoll, Salem, you’ve given me a very fast ship, with the finest crew — and we will not let you down.”

Visit bit.ly/3v3Dhps to read live coverage of this event.