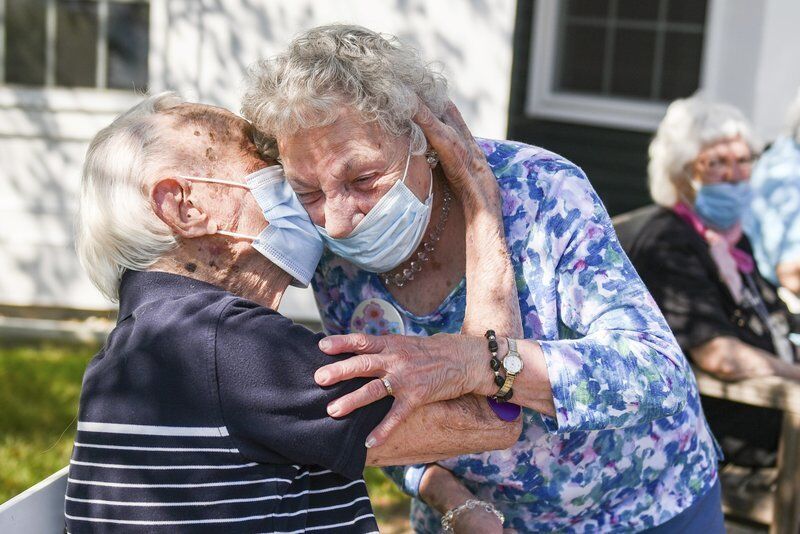 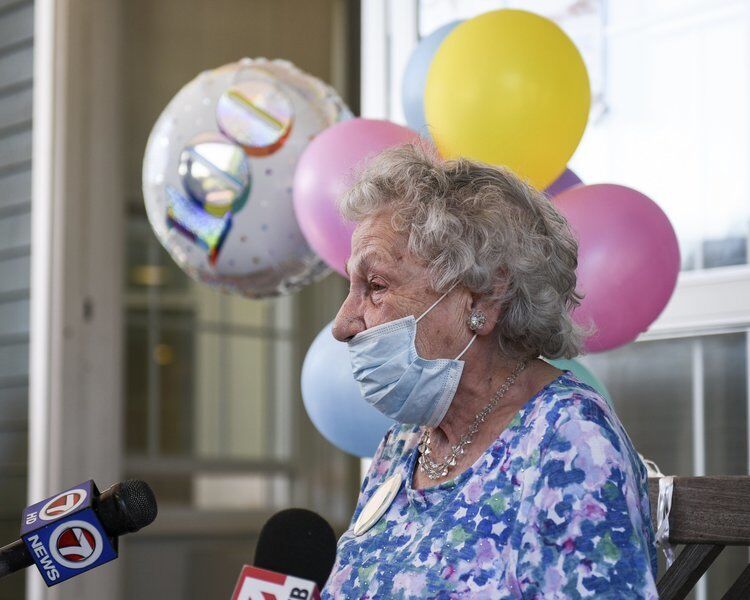 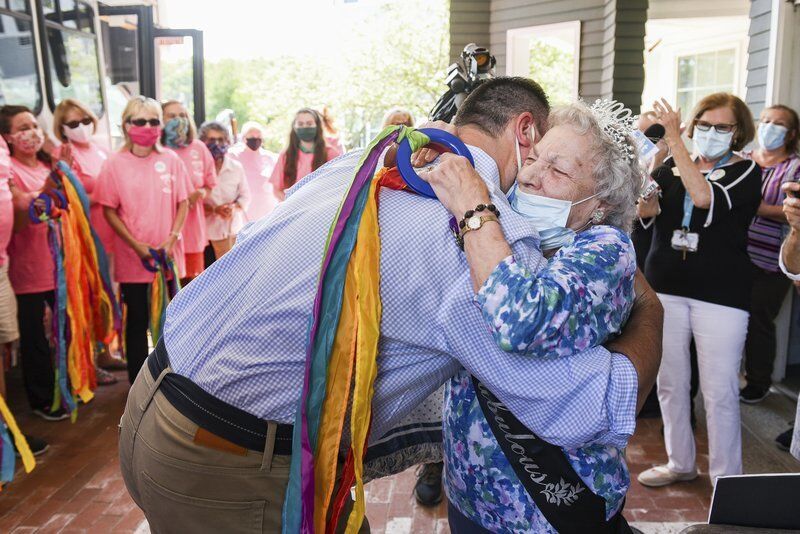 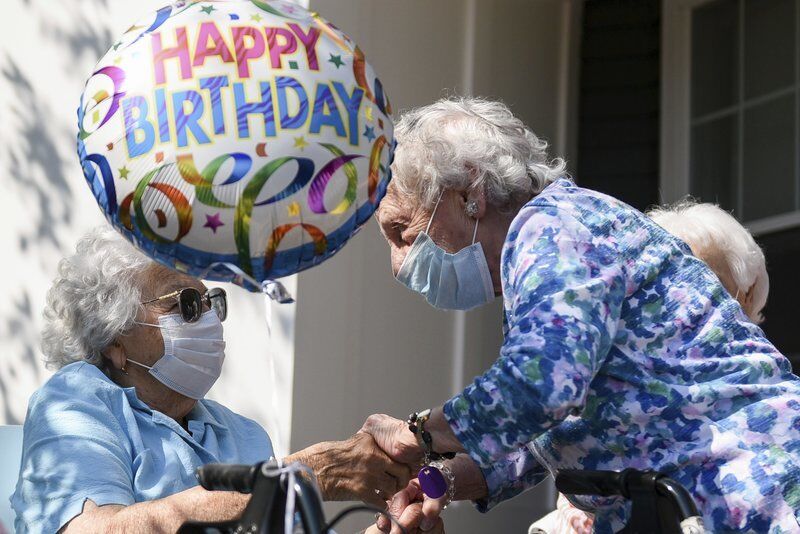 JAIME CAMPOS/Staff photo Kay Morrocco, right, is greeted by her friend, Esther Galpern, during the celebration. 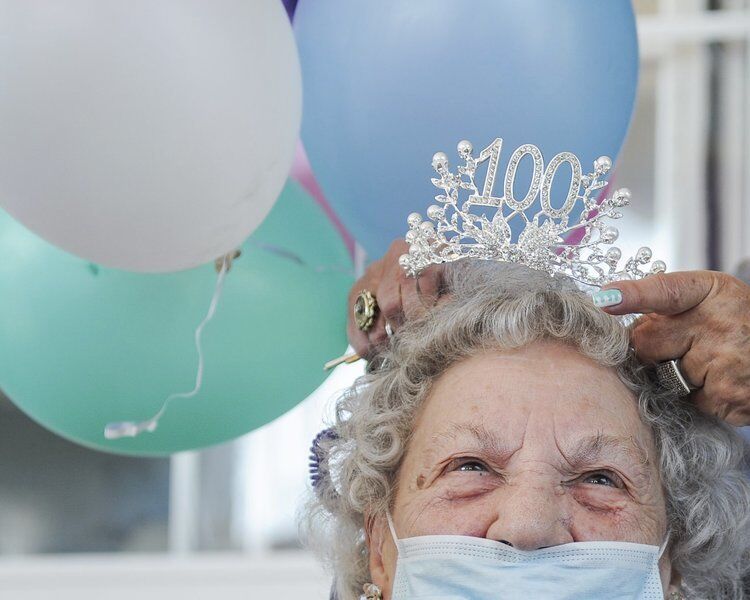 JAIME CAMPOS/Staff photoKay Morrocco is crowned with a 100th birthday tiara during the celebration. 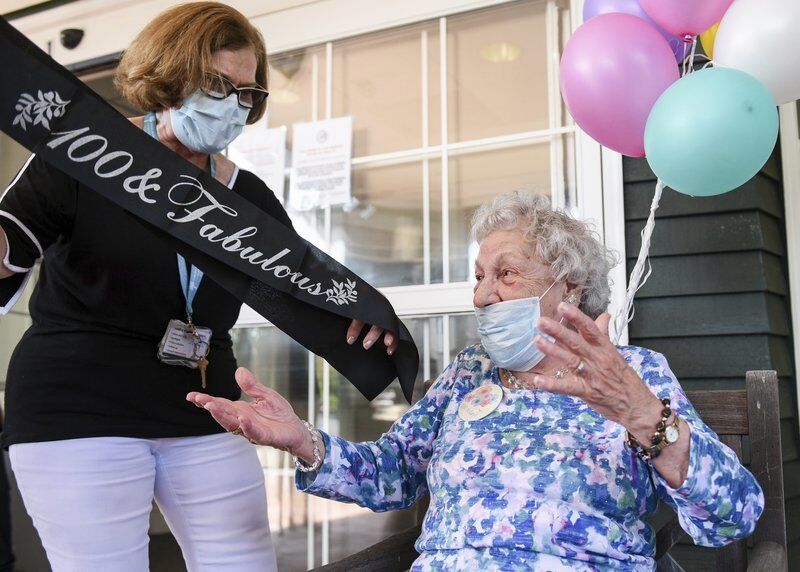 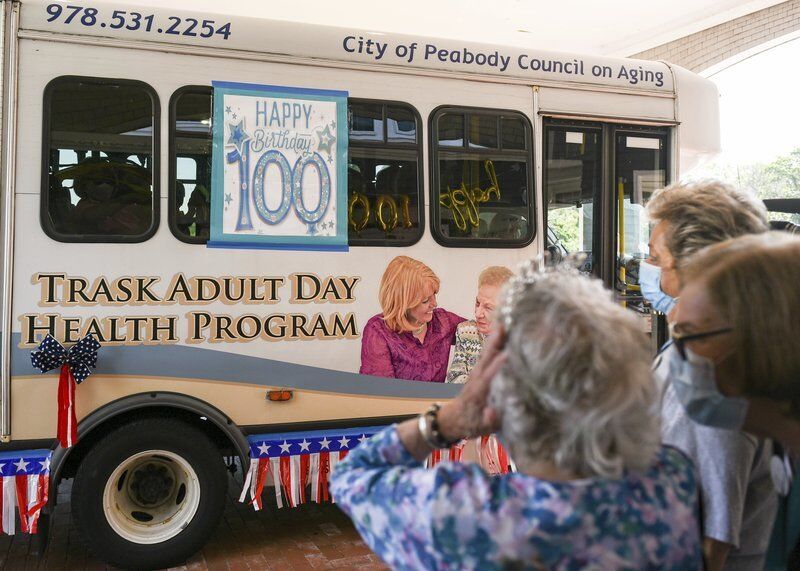 JAIME CAMPOS/Staff photoA decorated Peabody Council on Aging bus pulls up to the party with staff members on board. 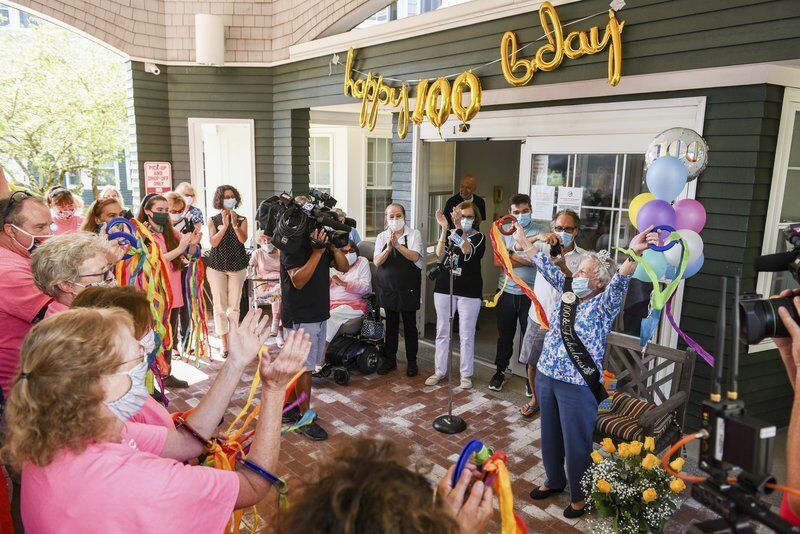 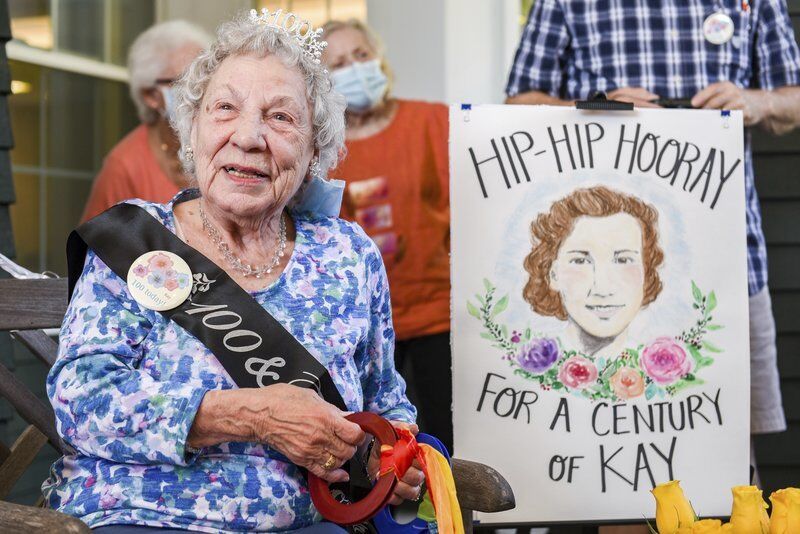 JAIME CAMPOS/Staff photoKay Morrocco celebrates her 100th birthday at the Kaplan Estates in Peabody amid the coronavirus pandemic.

JAIME CAMPOS/Staff photo Kay Morrocco, right, is greeted by her friend, Esther Galpern, during the celebration.

JAIME CAMPOS/Staff photoKay Morrocco is crowned with a 100th birthday tiara during the celebration.

JAIME CAMPOS/Staff photoA decorated Peabody Council on Aging bus pulls up to the party with staff members on board.

JAIME CAMPOS/Staff photoKay Morrocco celebrates her 100th birthday at the Kaplan Estates in Peabody amid the coronavirus pandemic.

PEABODY — Being Italian, having good genes, taking the stairs and being an active member of the Peabody Senior Center for 27 years are some of the reasons Catherine "Kay" Morrocco says she has lived to 100.

Because of the pandemic, Morrocco was thrown a social distanced 100th birthday celebration of sorts on Monday, under the portico of the Chelsea Jewish Lifecare Harriett and Ralph Kaplan Estates assisted living community on Lynnfield Street.

The highlight was the arrival of the staff of the Peabody Senior Center in a van that happens to have Morrocco's picture on it, as the face of the center's Trask Adult Day Health Program.

The mother of three grown children, who were all on hand, and four grandchildren was seated outside in a chair by the front door, while she was given a sash and crowned with a tiara.

When asked the secret to getting to 100, Morrocco quipped: "Being Italian," triggering laughs.

She noted her father, Peter Giuggio, came from Naples and her mother, Josephine, came from Sicily, "and it was a good match."

"The Senior Center made me what I am," said Morrocco, who is a member of both the Peabody Council on Aging's board and the Friends of the Council on Aging board, though the coronavirus pandemic has made it difficult to participate in these activities.

Morrocco said she thinks it's her genes from her mother's side that gave her long life. Both her mother and her maternal grandmother, Catherine Cannizzaro, who emigrated from Messina, Sicily, with two children in 1902, lived to be 94. Her father, Morrocco said, died at age 65.

The Senior Center has also kept her going, she said.

"So I think that's the secret is to just keep busy and do the things that make you feel good," Morrocco said.

Before the Senior Center closed its doors due to the pandemic, Morrocco wrote for the newsletter, worked the Senior Center's gift shop, ran card games, sold tickets for dances, helped with the Hug A Bear program and worked fundraisers, her son, James "Jimmie" Morrocco of Danvers, said.

She has won her share of recognition over the years, including being awarded the Torigian Award for being a role model to seniors at the International Festival in 2015.

"Kay is really a true Peabody treasure," said Mayor Ted Bettencourt, who stopped by to give Morrocco a quick hug and a gift. "She's 100 years old, you would never think she's anywhere near that the way she's so involved. She's been on our board at the Council on Aging for many years, contributes ... She's just an incredible lady that I've been privileged to know."

As Morrocco greeted her masked well-wishers and friends, sirens could be heard in the distance. Not long after, a caravan of police cars, a Peabody fire engine, the mayor's car and cars of friends from the Senior Center arrived and circled the parking lot.

The Senior Center van rolled and parked under the portico, and Senior Center Director Carolyn Wynn, who was driving, ran out to give Morrocco a quick hug, noting she was breaking the rules. Morrocco didn't seem to mind.

The whole affair lasted about 10 minutes. The afternoon birthday festivities included small gatherings with family and her sisters in the courtyard.

"This was delightful," Jimmie Morrocco said. "Everyone here at Kaplan just shines in their care for the elderly, and they love my mom."

Jimmie Morrocco, 67, is the middle child in a family of three siblings that includes older brother Jackie, 70, and younger sister Cathy Cronin, 64, of Newton, New Hampshire.

"She loves to walk, she loves to dance," said Cronin. "She's busy all the time. She gets involved in committees and programs."

Kay Morrocco has lived in Peabody for almost 60 years. She was born in Salem, one of eight children. She was married in Salem to John "Johnny" Morrocco and lived in East Boston for a time before moving to Peabody. She has lived at the Kaplan Estates for about three years. She and her husband were married for 48 years before he died of lung cancer at age 74 in 1992. She worked as a teachers aide at the Center School and part-time at the former Filene's department store at the Northshore Shopping Center.

Ellen Gordon, director of resident life, said the pandemic posed a challenge when it came to celebrating Morrocco's 100th as folks tried to keep distanced, "but for us, when we have a 100th birthday, it's just the most amazing thing. And Kay is truly amazing."