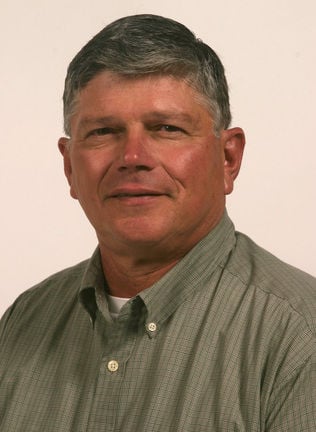 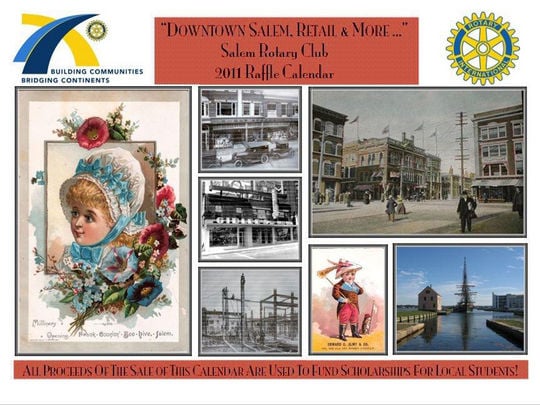 The 2011 Salem Rotary calendar has images of several old stores, including AlmyCo. and Ray Stores, and the Paramount Theatre under construction. 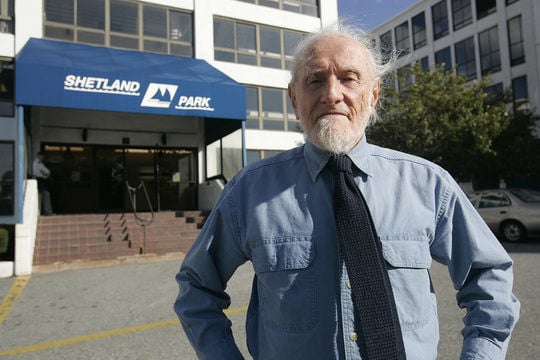 Robert Lappin, owner of Shetland Park, is suing the Securities and Exchange Commission over money lost in the Madoff scandal. 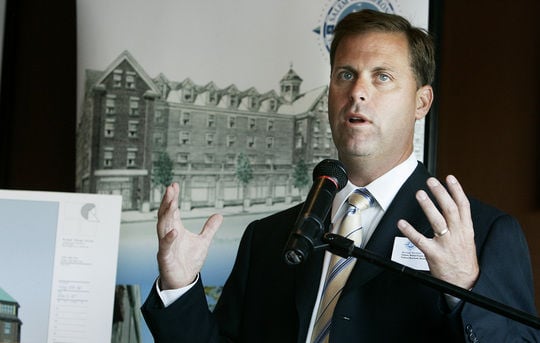 Mike Rockett of the Salem Waterfront Hotel spoke to the Licensing Board on Monday night about his liquor license. 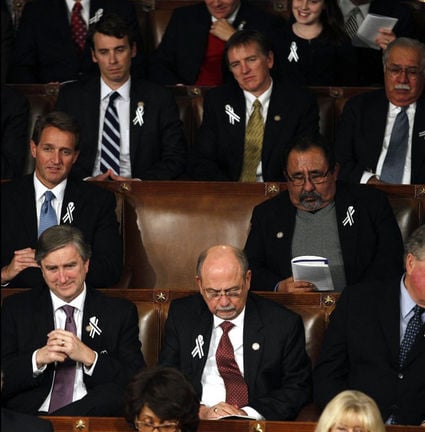 At Tuesday night's State of the Union address, Congressman John Tierney sits in front of the seat that was left empty for Arizona Congresswoman Gabrielle "Gabby" Giffords. Congressman Jeff Flake, a Republican from Arizona, sits behind Tierney.

The 2011 Salem Rotary calendar has images of several old stores, including AlmyCo. and Ray Stores, and the Paramount Theatre under construction.

Robert Lappin, owner of Shetland Park, is suing the Securities and Exchange Commission over money lost in the Madoff scandal.

Mike Rockett of the Salem Waterfront Hotel spoke to the Licensing Board on Monday night about his liquor license.

At Tuesday night's State of the Union address, Congressman John Tierney sits in front of the seat that was left empty for Arizona Congresswoman Gabrielle "Gabby" Giffords. Congressman Jeff Flake, a Republican from Arizona, sits behind Tierney.

SALEM — Yes, that was John Tierney at Tuesday night's State of the Union address sitting right in front of the seat left empty for Gabby Giffords.

At the start of President Obama's speech, the cameras panned to the Arizona delegation to show the vacant seat in honor of the Arizona congresswoman, who is making a steady and remarkable recovery from the gunshot wound to her head on Jan. 8.

Tierney, the Salem Democrat, apparently has a pretty good relationship with Jeff Flake, a Republican congressman from Arizona. While Tierney was chairman of the Oversight Committee on National Security, Flake was the ranking Republican. The two agreed to sit together as part of the effort by Democrats and Republicans to act civilly for one night.

Tierney actually sat in front of Flake so that the entire Arizona delegation could sit together as a show of unity and support for Giffords.

At one point, Tierney and another congressman kidded him about his 2009 experience living alone for a week on a remote island in the Pacific Ocean. They even suggested he try out for the TV show "Survivor."

If you want more about Flake, Google a 2009 story the Washington Post wrote about him.

Mike and Rick Rockett, two of the famous Rockett brothers from Marblehead, appeared before the Licensing Board on Monday night to update them on the status of an inactive liquor license they hold for the long-delayed expansion of the Salem Waterfront Hotel on Pickering Wharf.

The project has been slowed, they said, due to the lagging economy and estate issues following the death last fall of their father, J. Hilary Rockett, a Marblehead state representative, selectman, businessman and family patriarch.

Expect the project to start moving this year, they said.

If you tire of watching Saturday cartoons, head down to the YMCA — the downtown Y — for some real entertainment.

From noon to 1 p.m., local "celebrities" will take part in a spin-a-thon to benefit the Salem YMCA's "Y For All Campaign."

Spinning, for the uninitiated, is when someone sits on a stationary bike and pedals as hard as they can until their face gets red, they sweat buckets and they curse whoever talked them into this self-torture.

Councilor Steve Pinto, a Y regular, apparently is the guilty party who talked three fellow councilors into joining him — Paul Prevey, Jerry Ryan and Bob McCarthy. McCarthy, still recovering from knee surgery, should consider bringing along a doctor and lawyer.

The Y For All Campaign, by the way, is a great cause. Funds raised offset the cost of after-school programs, summer camp and memberships for low-income and military families.

The spin-a-thon goes from 1 to 5 p.m., and anyone who wants to take part and help a good cause should head down to the downtown Y tomorrow.

Robert Lappin, who lost millions in the Bernard Madoff scandal, was part of a class-action lawsuit filed this week in federal court in New York.

Lappin, 88, the owner of Shetland Park, and eight other plaintiffs are suing the Securities and Exchange Commission for negligence and are seeking millions of dollars in restitution.

Lappin is suing on behalf of Shetland Properties, which lost $5 million from its employees' 401(k) pension fund, money Lappin repaid out of his own pocket.

The folks in the McIntire Historic District sent a shout-out this week to Ward 2 Councilor Mike Sosnowski for getting the big diesel trains to stop idling for hours along Bridge Street, near the entrance to River Street.

According to neighbors, the train had been sitting there for days spewing fumes.

Most of those trains that run along the North River canal, we are told, are headed over to the Eastman Gelatine plant in Peabody.

It may be the end of January, but if you haven't picked up a copy of the Salem Rotary 2011 calendar, it's not too late.

Everyone who buys a raffle calendar has a chance to win a cash prize. Every week, at the Rotary luncheon, the name of a $100 winner is drawn.

The calendars are for sale at the Chamber of Commerce at 265 Essex St., the Hawthorne Hotel and The House of the Seven Gables.

It all goes to a good cause — the Salem Rotary scholarship fund and other Rotary charities.

There was news out of Richmond, Va., this week that we would generally ignore as too boring to report, but it involves a guy who just made news up here.

Weekley is the guy Salem Mayor Kim Driscoll has dealt with for the past few years. He is also the Dominion official who came here a few weeks ago to present checks for $1 million to the School Department and $100,000 to the Salem Education Foundation and Salem CyberSpace.

OK, maybe that was too boring to report.

US Biological is a step closer to crossing the border from Marblehead to Salem.

Over the summer, the city granted the life sciences company a $167,209 tax abatement over 13 years to set up shop in the industrial park on Technology Way. Yesterday, MassDevelopment, the state's finance and development authority, announced it has issued a $2.33 million bond on its behalf.

The company intends to use the money, along with a conventional $1 million bank loan, to purchase the Salem site and build a manufacturing and office building.

After 11 years in Marblehead, US Biological plans to move 23 jobs here and add five new ones. It sells biochemicals, antibodies, recombinant proteins and other biological materials to researchers and companies around the world.