A side view of the wreckage after two trains collided near the Swampscott rail station in 1956. 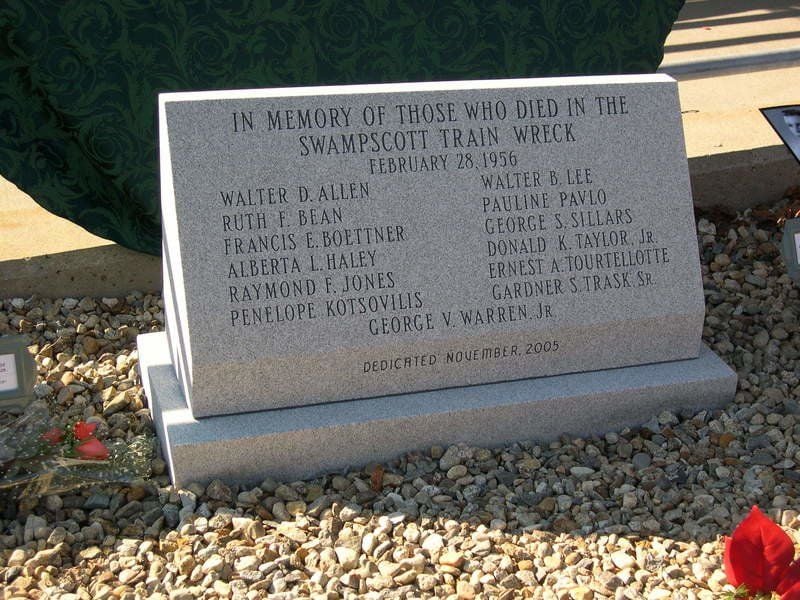 The Swampscott Historical Society raised funds for this memorial to the 13 victims of the 1956 Swampscott train crash. It was placed at the train depot in November 2005, but vanished last winter, presumably at the hands of a snow plow. It was found this week in the cemetery and will be returned to the depot. 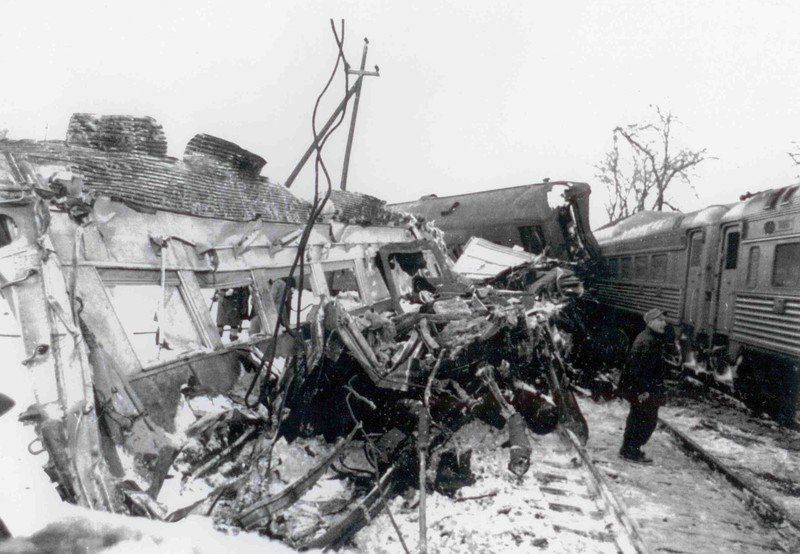 A view of the Boston & Maine Railroad wreckage, looking toward Salem. A Buddliner from Danvers hit a stopped train in Swampscott, killing 13 people. This is what was left of the inside of the Buddliner car.

A side view of the wreckage after two trains collided near the Swampscott rail station in 1956.

The Swampscott Historical Society raised funds for this memorial to the 13 victims of the 1956 Swampscott train crash. It was placed at the train depot in November 2005, but vanished last winter, presumably at the hands of a snow plow. It was found this week in the cemetery and will be returned to the depot.

A view of the Boston & Maine Railroad wreckage, looking toward Salem. A Buddliner from Danvers hit a stopped train in Swampscott, killing 13 people. This is what was left of the inside of the Buddliner car.

The train had to stop twice because of weather conditions and power problems, then a third time in Swampscott, near the Essex Street bridge, because the track signal was covered in snow.

While the conductor trekked a couple hundred yards down the track to the signal phone to speak with the dispatcher, another train was leaving Danvers, heading north.

What happened next — 60 years ago Sunday — would leave 13 people dead and about 100 injured.

It is a tragedy that still resonates in Swampscott, where the Fire Department and Historical Society put up a display this week in the lobby of Town Hall to commemorate the anniversary.

The Danvers train, a so-called Buddliner built by The Budd Co. of Philadelphia, was traveling about 50 miles per hour when it rounded the long bend in the tracks between the Salem and Swampscott station — located just where it is today — at around 8:20 a.m. By the time the engineer saw the warnings of the flagman from the stopped train ahead, it was too late.

The Buddliner rammed the rear car of 214, pushing it about 50 feet and causing the car to ride up and over the front car of the Buddliner.

"It peeled back the roof [of the front Buddliner car] like a sardine can, flattened the sides out, and stripped the seats off the floor," said Richard Symmes, curator of the Walker Transportation Collection at the Beverly Historical Society, which includes details of the crash.

The whole frame of the Buddliner car was sheared away from the shell as if peeled "by a giant can-opener."

Given the devastation, Symmes thinks it's amazing the death toll was not higher; there likely would have been about 40 people in the front Buddliner car. However, many people spent weeks or months in the hospital with serious injures.

Even some of the uninjured didn't get away scot-free, as the train that took some survivors into Boston hit another train in Revere. This time, fortunately, no one was injured.

All of the dead in the Swampscott crash had been in the Buddliner, including its engineer and fireman. Many of those who lost their lives were Danvers residents — among them, Gardner Trask Sr., father of Danvers Town Archivist Richard Trask.

"I don't remember much about life in 1956 when I was 8, but that day of his death is emblazoned in my memory," Trask said, recalling that he was happy that morning because school had been canceled because of the snowstorm. "We heard the news he was dead from television reports, and I can still recall the cry-out of my mother and grandmother when it was broadcast."

He said his father was in the first car, which he always took because it was the shortest walk and he'd suffered a heart attack the year before. Trask's uncle was also supposed to be on the train but missed it because of the weather.

Symmes, who was 14 at the time and lived in the area, rode his bike to the scene with a friend. Though much of the wreckage had been cleared before they arrived, he still saw a lot of the carnage.

Blame for the crash, Symmes said, fell heavily on the deceased engineer of the Buddliner, as it was thought he'd been traveling too fast for the weather. Blame was also placed on the brakes, since it was a new system with "anti-skid" properties, so people were quick to point to the unfamiliar technology.

A thorough investigation by the Interstate Commerce Commission found nothing wrong with the brakes, nor did it find any specific cause, but did determine the train shouldn't have been traveling that fast.

The collision left a mark on the North Shore community. Some of the survivors never took a train again, and for many years people didn't want to sit in the front or back cars.

"People avoided any possible point of impact; I remember that very well, people talked about it," said Symmes. "The local people in the area that lived here back then, almost everybody knew somebody who was killed that day."

Trask said it was the worst crash in living memory. Symmes said the only thing that came close was the 1981 collision at Prides Crossing in Beverly, which killed three people.

For the 50th anniversary of the Swampscott crash, the Swampscott Historical Society raised money for a granite memorial to the 13 victims, with all their names engraved on it. It was installed at the train depot and dedicated in 2005. It vanished last winter, however, presumably carried away by a snow plow. After much investigation, Symmes received an email Friday from the town of Swampscott saying it had finally been located in the town cemetery and that the Department of Public Works will return it to its rightful place.

Symmes, a Beverly resident, said not many people remain who remember how the tragedy shook the North Shore community.

"Trains pass the site two dozen times a day," he said, "but few passengers realize the chaos which took place there six decades ago."