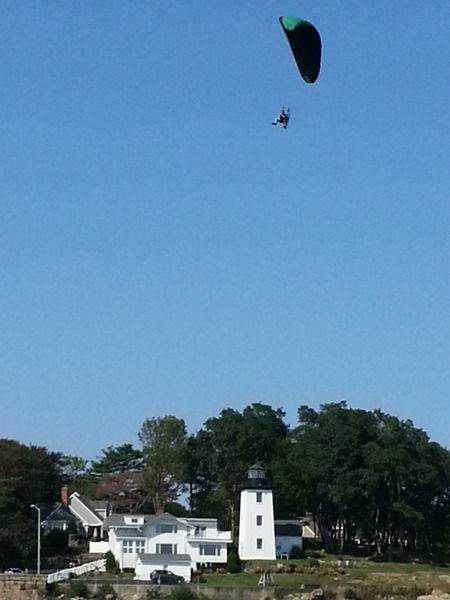 Patrick Tarmey is seen in his motorized paraglider above Hospital Point in Beverly yesterday afternoon. 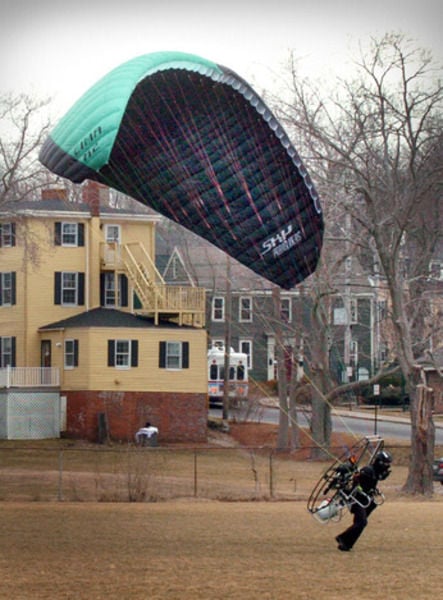 Patrick Tarmey gets a running start before going airborne in Newburyport in February.

Patrick Tarmey is seen in his motorized paraglider above Hospital Point in Beverly yesterday afternoon.

Patrick Tarmey gets a running start before going airborne in Newburyport in February.

SALEM — Patrick Tarmey knew Tuesday was the 11th anniversary of the 9/11 terrorist attacks.

“Which is why I didn’t fly over the power plant,” Tarmey, a paraglider, explained.

But he did fly close enough to downtown Salem that he touched off a series of nervous phone calls to 911 from Salem residents on Tuesday afternoon and again Tuesday evening.

And as he flew 150 feet over the North River, just before 6 p.m., traffic came to a screeching halt on James Ayube II Memorial Drive, the bypass road that connects downtown Salem to the Veterans Memorial Bridge.

Tarmey, 25, of Peabody, who owns a business called Paramotor Tours, had just landed at Furlong Park, he said, when the first of two Salem police officers approached.

The first, Patrolman Dana Mazola, told him about the calls from drivers and others and asked him about his glider, which has a motor and a propeller along with kitelike wings.

The second officer, Sgt. Frederick Ryan, asked Tarmey if he realized it was the anniversary of the terrorist attacks and if he thought it was a good idea to be out paragliding so close to places like the courthouses and power plant, and whether he should have called police to let them know he would be flying around town.

Tarmey told the officer he didn’t see the problem.

Ryan repeated his concerns, but Tarmey was not persuaded.

Tarmey said Ryan was “just very uptight, yelling at me like I’m some punk kid. I told him, ‘Sir, you’re overreacting.’”

Ryan decided to arrest him on a charge of disorderly conduct, citing the alarm Tarmey had caused to people who called the police, as well as those who were driving on the bypass road.

“The only reason I went to jail was because I decided to argue with him,” Tarmey said yesterday. “I’m going to express my opinion. I don’t think it’s fair to me. I don’t deserve, and nobody deserves, to be talked to like that.”

Tarmey said he did eventually apologize for not calling the police before taking off, but says he still sees nothing wrong with what he did.

He also denies that he was anywhere over land, saying that at 150 feet, the perspective of those on the ground may make it seem like he’s closer than he actually is.

He says he always flies over water because it’s safer for him.

During a court appearance yesterday, a Salem District Court prosecutor offered to dismiss the charge if Tarmey agreed to pay $50 in court costs.

Tarmey initially balked at the offer, demanding a trial.

But later yesterday, after realizing he’d have to spend hundreds of dollars to hire an attorney, he had a change of heart and agreed to pay the fine, though he still believes his civil rights were violated.

“I fly every single day,” Tarmey said. “It’s never been an issue up until yesterday.”