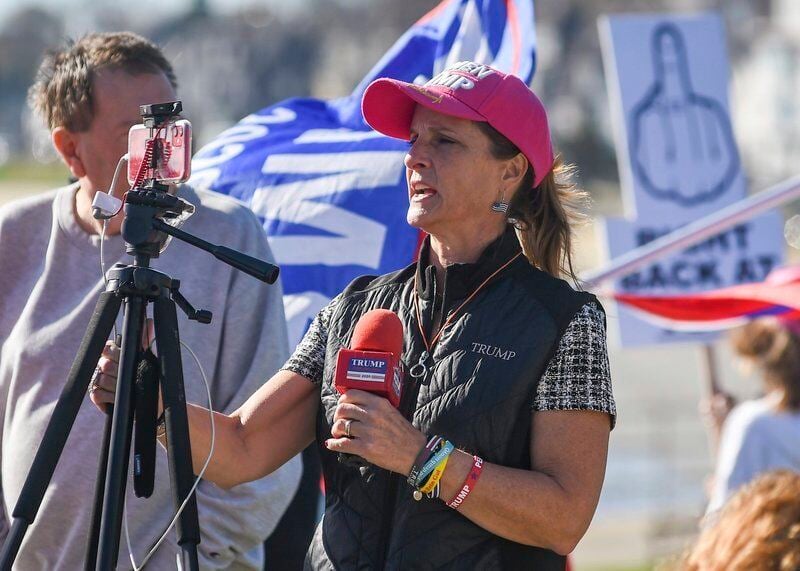 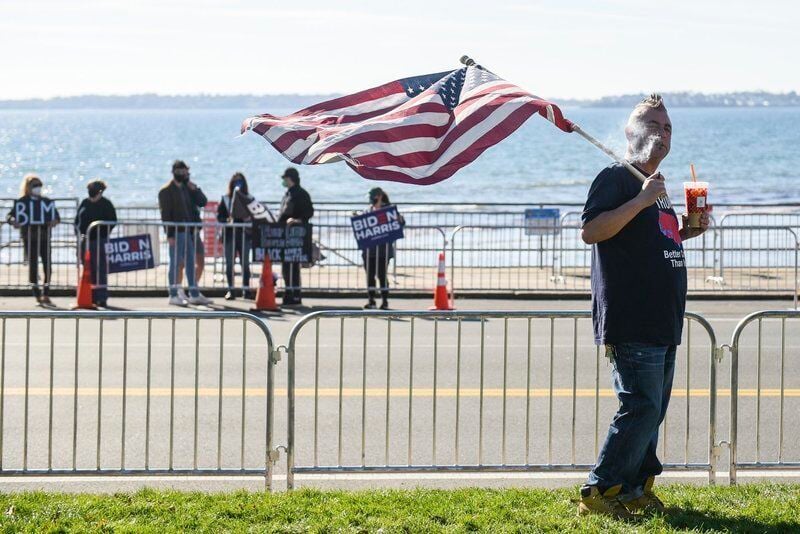 A Donald Trump supporter waves an American flag during a rally along Monument Avenue in Swampscott as counter-protesters hold signs across the street. JAIME CAMPOS/Staff photo 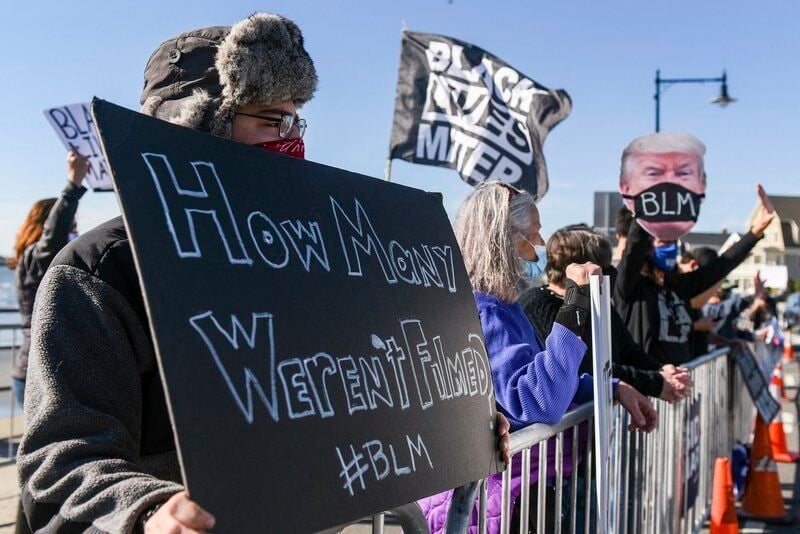 A Black Lives Matter backer hold a sign during a rally along Monument Avenue in Swampscott on Thursday. JAIME CAMPOS/Staff photo 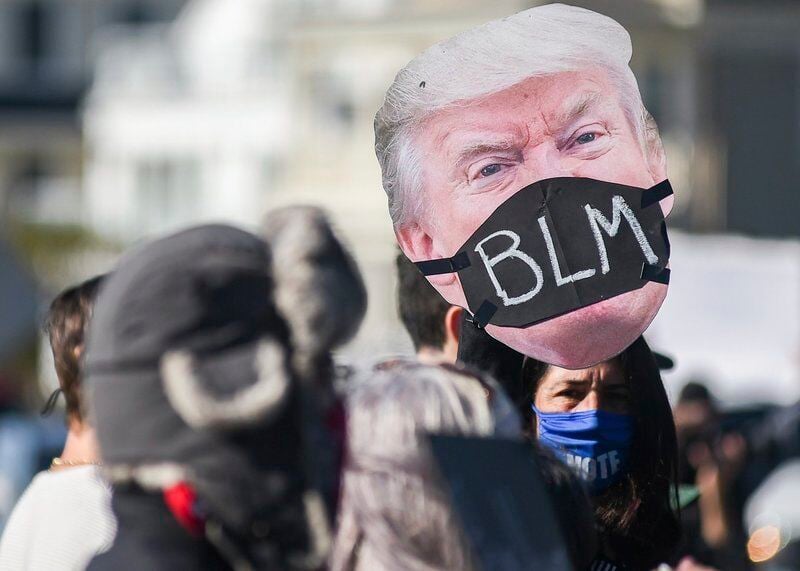 A counter-protestor holds up a cutout of Donald Trump with a Black Lives Matter mask during a rally along Monument Avenue in Swampscott Thursday. JAIME CAMPOS/Staff photo 11/4/2020 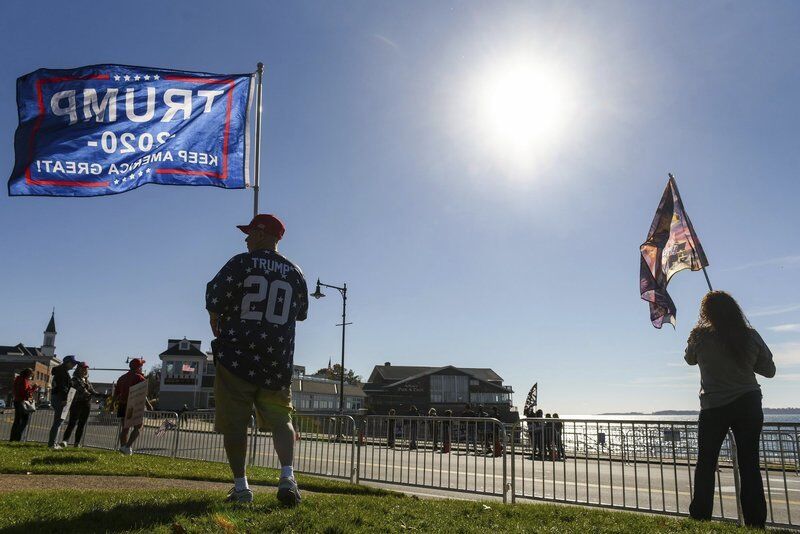 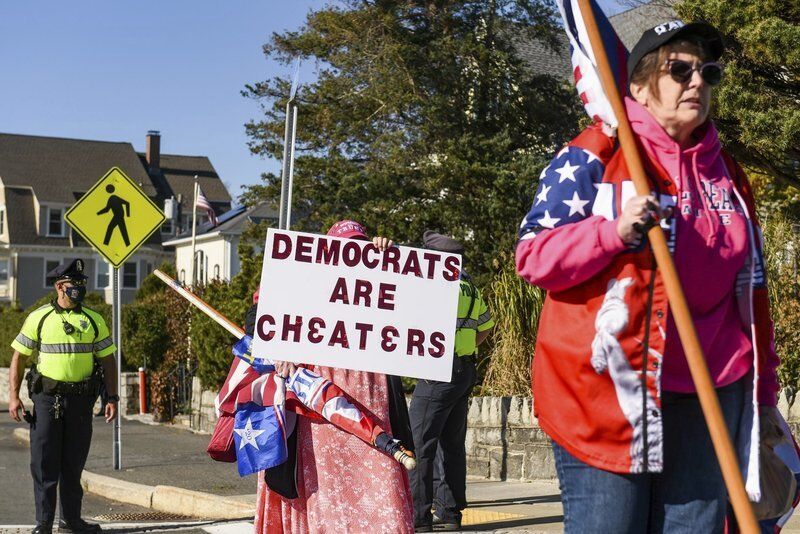 A supporter of President Donald Trump holds up a sign during a rally along Monument Avenue in Swampscott Thursday. JAIME CAMPOS/Staff photo

A Donald Trump supporter waves an American flag during a rally along Monument Avenue in Swampscott as counter-protesters hold signs across the street. JAIME CAMPOS/Staff photo

A Black Lives Matter backer hold a sign during a rally along Monument Avenue in Swampscott on Thursday. JAIME CAMPOS/Staff photo

A counter-protestor holds up a cutout of Donald Trump with a Black Lives Matter mask during a rally along Monument Avenue in Swampscott Thursday. JAIME CAMPOS/Staff photo 11/4/2020

A supporter of President Donald Trump holds up a sign during a rally along Monument Avenue in Swampscott Thursday. JAIME CAMPOS/Staff photo

SWAMPSCOTT— An anticipated standout in what has become a weekly event in support of President Donald Trump led Hadley Elementary School to cancel in-person classes on Thursday, Nov. 5, and go remote for the day.

“We have learned that there will be another political protest on Humphrey Street tomorrow,” read an announcement Wednesday from Principal Ilana Bebchick. “Due to the fact that we are still awaiting results of the election and out of an abundance of caution, Superintendent Angelakis and I have decided that tomorrow will be a remote day of learning for Hadley students. We feel that this is necessary to ensure the safety of students and the Hadley community.”

The school is diagonally across from Monument Square, where between 30 and 40 Trump supporters gathered again Thursday morning waving signs that read “Democrats are cheaters,” “Four more years” and “Stop the steal! Illegal Biden ballots found in swing states.” Others waved “Trump 2020” and “MAGA” flags.

Many of those who attended this standout in support of Trump were wearing red, white and blue and dancing to the music, a playlist that included Whitney Houston and “God Bless the USA,” playing over loudspeakers.

The Salem News asked people at the Trump standout for comment, but no one was willing to speak on the record. Dianna Ploss, a former New Hampshire conservative radio show host with ties to the North Shore, encouraged Trump supporters not to speak to the press by saying “no comments, no comments.” Ploss also posted a Facebook Live video during the event encouraging supporters to tell reporters to “Go pound sand. We don’t want them. You say ‘no comment.’”

On the other side of the street and down the road on the border to Lynn, a few dozen counter-protesters were waving flags and signs that read “Black Lives Matter” and “Biden Harris 2020.”

More than a dozen uniformed state and local police were in the square to monitor the situation.

Trump supporters, and counter-protesters, have been coming to Swampscott every Thursday for several months.

Kathy Hempel of Marblehead, Justine Fuccioni of Lynn, Ellen Petersen of Marblehead and other counter-protesters said that this week, there were far fewer people attending the Trump standout and the flags and signs being flown were toned down compared to previous weeks.

They said in the past, the Trump supporters have flown Confederate flags and a QAnon flag, and also waved signs with profanity.

Lauren Weiss of Marblehead said she’s been attending counter-protests every week since August. She said this was the first week she did not see Trump supporters waving a Confederate flag.

“It means something different to different people,” she said. “They get a lot of honks, and I'm pretty shocked to see that around here. It's very negative and hurtful. Hopefully (people driving by) see our signs on this side of the street and feel welcome. That's why I am here.”

Weiss also said she views attending these counter-protests as a patriotic act.

“Freedom, justice and liberty for all,” she said — that's what patriotism means to her. “Freedom to vote, and having all of those votes counted. That's part of living in a democracy.”

While Wiess spoke, Trump supporters across the street were singing the national anthem.

Rosemie Leyre, who is originally from Belgium but now lives in Lynn, said she continues to come to the counter-protests because she believes it’s important to show how much support Democrat Joe Biden has.

“I would prefer myself there is more discussion among people with different positions, because that is the only way to move forward,” Leyre, 77, said. “We cannot move forward if we don't say what we think.”

Sandra Winter, 82, of Marblehead, said she thinks her attending these counter-protests is important for many reasons, but the most significant is to express and advocate for her values.

“I think we have to look at what the word 'democracy' means,” she said. “I've been to a lot of rallies where they say, ‘This is what democracy looks like.’ I don't know if we've ever really been a democracy. I think we think we are a democracy, but to be a true democracy, an awful lot would have to change. A lot of injustice still exists.”

She added: “This election is a new low for the United States, but supposedly you can’t go any lower when you hit a bottom, so there is hope.”

“I am here to spread the word and make people feel they are accepted here and make sure they feel safe enough to walk out of their house in the morning,” she said, adding that she wants the Black Lives Matter movement to continue to be talked about in the coming months.

Over two hours Thursday morning, multiple cars honked and waved in support of both sides.