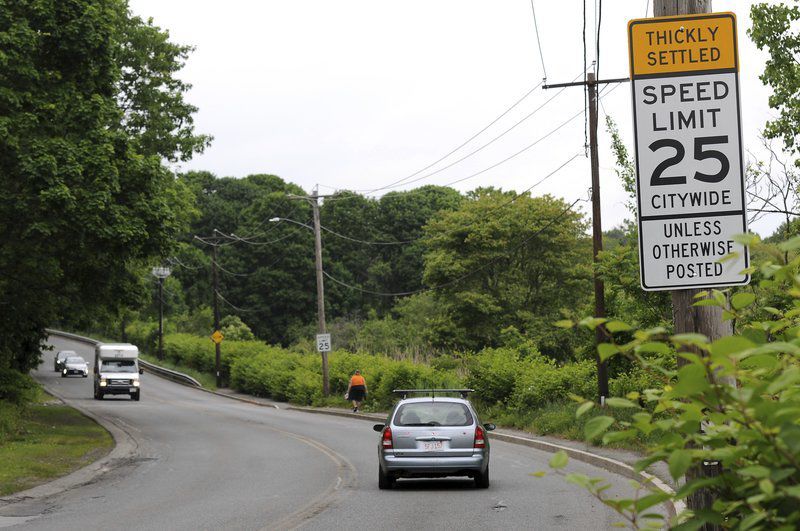 PAUL BILODEAU/Staff photoA 25 mph speed limit sign on on Swampscott Road at the city line in Salem. The speed limit on the road was recently changed from 40 mph to 25 mph, but city officials did not get state approval first, calling into question whether the new limit is enforceable. 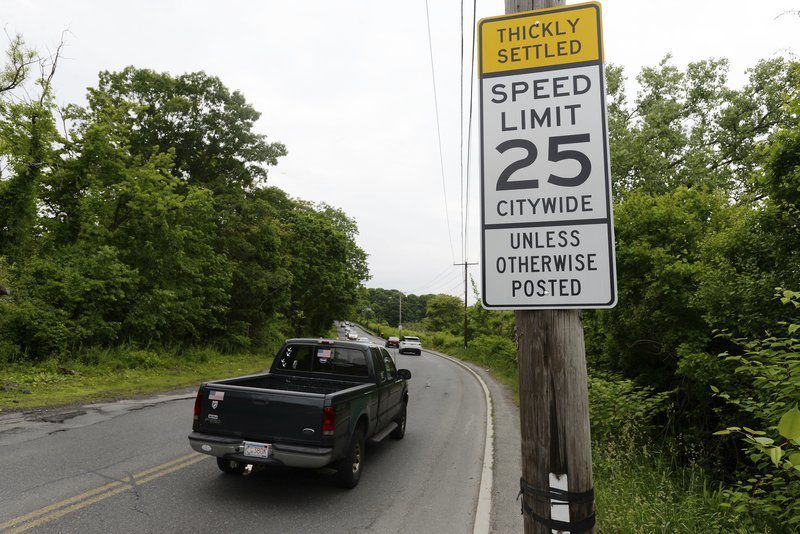 PAUL BILODEAU/Staff photoA 25 mph speed limit sign on on Swampscott Road at the city line in Salem. The speed limit on the road was recently changed from 40 mph to 25 mph, but now city officials are questioning whether the new limit is enforceable.

PAUL BILODEAU/Staff photoA 25 mph speed limit sign on on Swampscott Road at the city line in Salem. The speed limit on the road was recently changed from 40 mph to 25 mph, but city officials did not get state approval first, calling into question whether the new limit is enforceable.

PAUL BILODEAU/Staff photoA 25 mph speed limit sign on on Swampscott Road at the city line in Salem. The speed limit on the road was recently changed from 40 mph to 25 mph, but now city officials are questioning whether the new limit is enforceable.

SALEM — Speed limit signs on Swampscott Road were changed from 40 mph to 25 mph following a City Council vote last summer, but no one can say whether or not the new limits are enforceable.

The council voted unanimously in favor of dropping the longtime limit on the road, a main artery in and out of Swampscott, during a special meeting on July 31. The decision was unanimous with no discussion. The new signs went up after that.

But it seems the city didn’t get the proper state approvals first.

Now, the city plans to petition the state Department of Transportation to conduct a traffic study and approve the new limit. In the meantime, the new 25 mph signs will stay up, according to Nick Downing, the city’s acting director of the Parking and Traffic Department. But it’s not clear whether the lower limit is enforceable at this point.

However, he said that to make the change “completely justified” it should have the right state approvals.

“MassDOT will be looking into this issue and whether the posted speed limit signage complies with legal requirements,” said state Department of Transportation spokesman Patrick Marvin in a statement.

Last March, the city opted into the new state law that allows communities to drop their default speed limit from 30 mph to 25 mph. But Swampscott Road does not fall under this law, Downing acknowledged.

Preczewski said the special limit of 40 mph was set for Swampscott Road back in the 1970s. Back then, he said, there were fewer businesses, fewer homes nearby, and fewer vehicles entering and exiting driveways.

Now, it’s different. And the accident count has actually gone down since the new signs were put up.

There’s been just three reported accidents on Swampscott Road for this year up until April 20. Last year, there were 14, while 2016 had 20 accidents recorded, according to Preczewski.

The city has not yet petitioned DOT to review the change. Downing said his office is working on it. And he said changing the speed limit signs back to 40 mph now, just to have the state potentially approve the 25 mph limit, might be too confusing for motorists.

“The plan is to leave the signs up as they are now as we go through this process with (DOT),” Downing said.

Once the city submits its request, the state will need to conduct a traffic study. That includes placing small tubes across Swampscott Road that can gather information, such as how many cars use the road and at what speed. The state will then calculate what the speed limit will be, considering the amount of cars that travel Swampscott Road and the 86th percentile of the average speed they’re traveling.

For those who use Swampscott Road on a regular basis, the sign change is frustrating.

Ivan Sever, a 10-year Swampscott resident, said some people who have traveled the road for a long time still go 40 mph, but others now follow the sign change and go 25 mph.

“It makes people impatient,” he said. “They may try to pass and it’s a no-passing zone.”

Sever said he uses Swampscott Road to get to Home Depot or to Route 128.

“It’s affecting a lot of people who are trying to connect to these places,” he said.