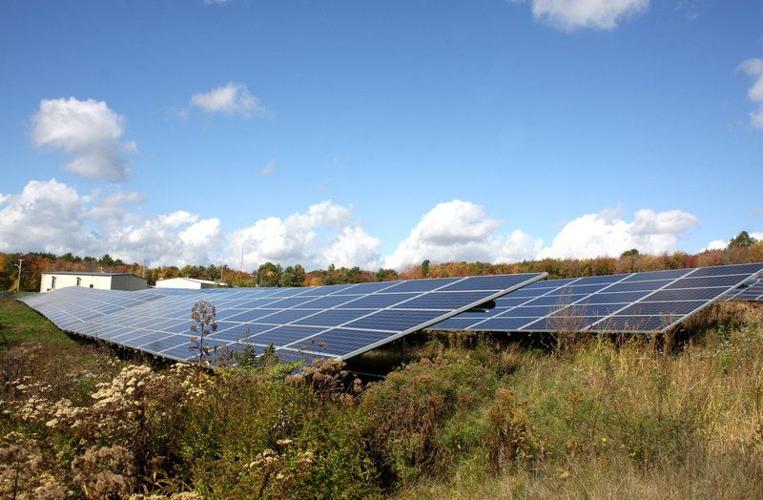 DUSTIN LUCA/Staff photoA Boston-based solar developer has identified seven city-owned sites around Beverly that could be used for solar power arrays, like this array at Birch Plains Park near the airport. The sites are under study now.

DUSTIN LUCA/Staff photoA Boston-based solar developer has identified seven city-owned sites around Beverly that could be used for solar power arrays, like this array at Birch Plains Park near the airport.

DUSTIN LUCA/Staff photoA Boston-based solar developer has identified seven city-owned sites around Beverly that could be used for solar power arrays, like this array at Birch Plains Park near the airport. The sites are under study now.

DUSTIN LUCA/Staff photoA Boston-based solar developer has identified seven city-owned sites around Beverly that could be used for solar power arrays, like this array at Birch Plains Park near the airport.

BEVERLY — A solar energy developer is working with city officials to explore whether it will pay to build solar arrays on several city-owned properties.

BlueWave Capital, a solar energy developer based out of Boston, and city officials have targeted sites that could support solar photovoltaic panel arrays, according to Aaron Clausen, city planning and community development director.

The sites would be similar to Birch Plains Park, where a private developer recently built a solar array on city-owned land near Beverly Municipal Airport, Clausen said.

“They install the solar array and connect it. They pay for the capital costs to do so, and they sell the city energy at a per-kilowatt-hour basis,” Clausen said. “It’s less than what we pay National Grid. There’s significant savings.”

Several sites are being reviewed.

“Based on their preliminary work, they’ve prioritized certain sites and said, ‘These look like they would work,’” Mayor Mike Cahill said. “We’re now in the process of taking a closer look at the sites they think are viable.”

On top of new parking canopies at Beverly High School

On unused roof space at the high school; and

Upgrading an array adjacent to the high school that was first built in the 1980s.

“BlueWave has given us some build-out scenarios, one using the landfill scenario, one not,” Cahill said. “They’re talking about (cost savings of) anywhere from $80,000 to $180,000 a year.”

A site being targeted for further analysis doesn’t mean the proposal is a slam dunk for solar upgrades, however.

The discussions are in the earliest stages, when city officials and the company are looking at the viability of each option, BlueWave Capital founder John Devillars said.

“Our responsibility is to work with these communities to identify municipal properties that are suitable for solar installations and to provide options for how those projects might be developed for solar energy and what the benefits to the municipalities are,” Devillars said.

One of the sites, the Otis Road landfill just off Brimbal Avenue, puts city officials at a fork in the road. The issue went before the Economic and Community Development Council recently, Clausen said.

The second phase of an economic development project envisioned for the area would include a bridge over Route 128 to open up more land for development.

“We want to discuss the trade-off of the financial benefit of having the array there and the potential development of that property,” Clausen said.

The question for the site becomes whether the city should put solar there now and get immediate savings or save it for development about a decade from now, Clausen said.

BlueWave Capital approached the city as part of a process run by the Metropolitan Area Planning Council, according to Devillars. The regional planning agency launched a project in 2012 for companies to compete for work in a pool of 17 towns in the region, said Cammy Peterson, manager of the Planning Council’s Clean Energy division.

“One of the things we found is best to get clean energy implemented in cities and towns is to run these regional procurements,” Peterson said. “BlueWave is the most qualified respondent. They then are eligible to work with any of those 17 to implement municipal solar projects.”

Six to seven companies initially applied for the opportunity. A Boston-based solar developer named Broadway Electric Co. was selected last February to work with the cities and towns, but the company closed this past winter, Peterson said.

With that, BlueWave was next in line for the offer, she said.

“Beverly has taken advantage of that opportunity to sit down with BlueWave and the stakeholders in their city, and with us, to consider what municipal sites would best fit solar,” Peterson said.

Other cities and towns working with BlueWave include Brookline, Chelsea, Marlborough, Reading and Weymouth, according to a statement from the company.

“It’s got real promise, and we want to travel the path and make certain it’s the right thing to do — or not,” Cahill said. “If by utilizing some municipal building space and real estate, we can realize these benefits financially and cut our dependence on fossil fuels, that’s a path we’ll go down.”

BEVERLY — The fate of a proposed shopping plaza on Brimbal Avenue remains in the hands of the Planning Board, which held its second meeting on…