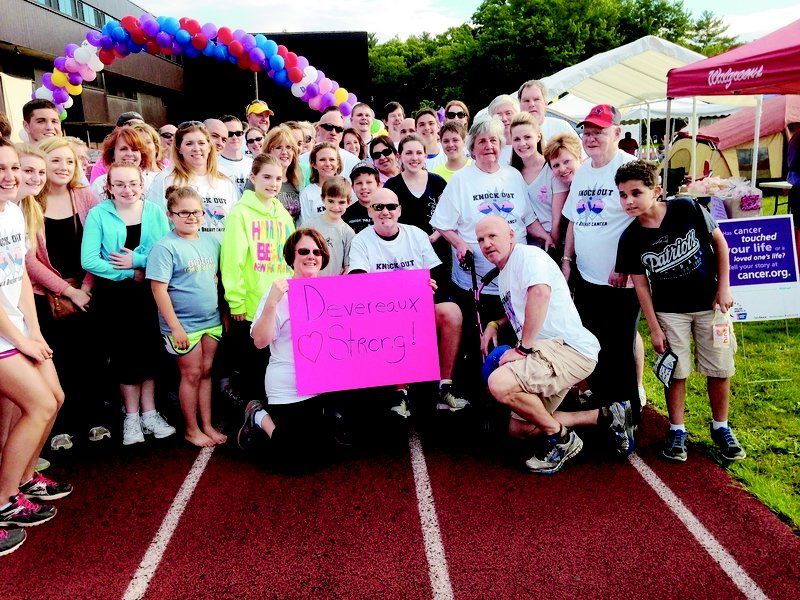 Peter Devereaux of North Andover, seated in the middle, is surrounded by family and friends from team Adrenaline Knockout at the Peabody Relay for Life last weekend. The first lap for cancer survivors was dedicated to Devereaux, who has breast cancer. 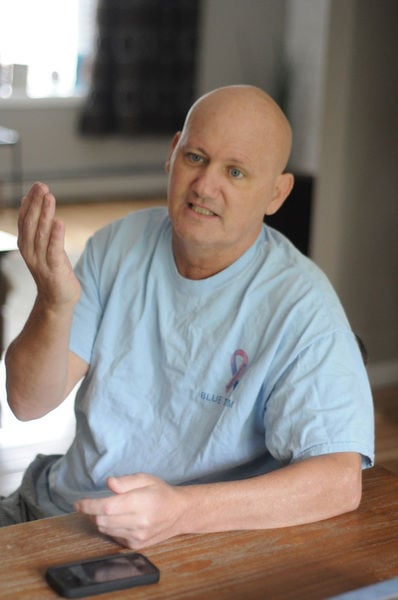 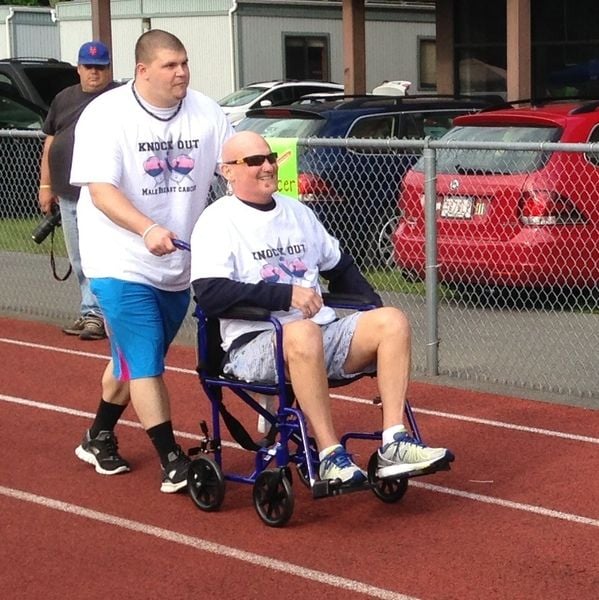 Peter Devereaux at the 20th annual Peabody Relay for Life. 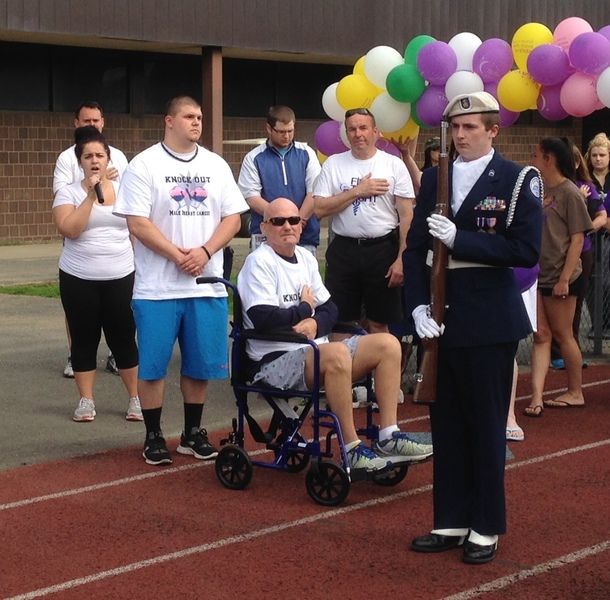 Peter Devereaux at the Peabody Relay for Life held last weekend. Six and a half years after his initial diagnosis, the cancer has spread to most of Devereaux's major organs and his bones.

Peter Devereaux of North Andover, seated in the middle, is surrounded by family and friends from team Adrenaline Knockout at the Peabody Relay for Life last weekend. The first lap for cancer survivors was dedicated to Devereaux, who has breast cancer.

Peter Devereaux at the 20th annual Peabody Relay for Life.

Peter Devereaux at the Peabody Relay for Life held last weekend. Six and a half years after his initial diagnosis, the cancer has spread to most of Devereaux's major organs and his bones.

Peter Devereaux was just waking up when he discovered the mass in his chest.

It was Friday, Jan. 11, 2008. Since the former Marine was in good shape with more muscle than fat, the bump caught his attention. He told himself he’d gotten it playing basketball.

“I had no idea about men with breast cancer,” the North Andover man said.

He also had no idea that after a doctor’s appointment the next day, he would be hustling to meetings with surgeons from New Hampshire and Boston; nor that in less than a month, he’d be in full-blown cancer treatment.

When the doctor called to tell him he had breast cancer, Devereaux thought he was reading the wrong patient’s chart.

There was no mistake, however. Not only did Devereaux have male breast cancer, but at a very young 45 years old. Most male patients who get breast cancer develop the disease even later than women.

Ever since, he has been on a mission to raise awareness about male breast cancer, even as he battled the disease. He appeared most recently at the 20th annual Relay for Life last weekend in his hometown of Peabody to cheer on his team of family and friends.

In an email Friday, he said he had just finished radiation. “So right now, I am done with treatment and entering hospice at home.”

Of course, he felt isolated at first.

But what Devereaux also would learn in time is that he’s part of the largest cohort of male breast cancer patients ever recorded: former Marines who were stationed at Camp Lejeune. At the North Carolina base, Marines and their families were exposed to toxic water from at least 1957 to 1987. Devereaux served four years with the Marines beginning when he was 18 and was stationed at Camp Lejeune for 16 months.

In August of 2008 — 28 years after being stationed at the base, Devereaux received a letter stating that he may have been exposed to toxins at Camp Lejeune. It takes 20 to 30 years for the toxins to begin causing cancer. Devereaux believes that if he had known of the exposure earlier, he may have been able to change the course of his disease.

In 1997, the Agency for Toxic Substances and Disease Registry published a report called the Camp Lejeune Public Health Assessment, which concluded that contaminated drinking water there did not increase the risk of cancer in adults.

“Most people with cancer have no idea where it came from,” he said. “At least we know, but it is frustrating. ... The bottom line is you are upset and wish things had happened differently. Our ultimate goal is to bring a lot of awareness to this situation and to ensure that it never happens again.”

Devereaux doesn’t dwell on regrets, however. Instead, the former machinist and landscaper has become an advocate of cancer patients, particularly for men with breast cancer.

“When I was first diagnosed, I felt like a freak. Any cancer is uncool and then to have this women’s thing,” he said. “But I’m going to be the guy who gets out there. I was given this disease because most guys don’t know (about the risk of breast cancer). They say that knowledge is only good if you can pass it on. If I can share, it makes a difference.”

Six and a half years after his initial diagnosis, the cancer has spread, and his last few treatments have been unsuccessful.

“We’re not losing hope. We never lose hope, but we’re being realistic,” Devereaux said. “And it’s as real as it’s ever been. But I try not to deal in reality too much.”

When he speaks in public now, Devereaux notices more and more men in the crowd.

In May, his brother and a friend wheeled him through the two-day Avon Walk for Breast Cancer in Boston, where he was the featured speaker at the opening and closing ceremonies.

Devereaux acknowledges that many things have changed since his diagnosis, but he continues to look for the silver lining. He relishes the love and support of his friends and family and the chance to make a difference in the world.

“I was tough, in shape, a former Marine, but I wasn’t cancer-tough,” Devereaux said. “I have a great life except for the cancer. Most people have a lot of things wrong. I am constantly inspired by the people around me.”

In the Devereaux home, Fiona, Peter’s wife of 18 years, is the caregiver and support person, providing inspiration to him every day.

“I always knew that my wife was a cool, pretty chick. But this cute little Irish girl is a bad-ass,” Devereaux said. “Little do you know at the beginning how much (you’ll go through). Our love went to a whole new level.”

They have a 16-year-old daughter, Jackie, who is a student at North Andover High School.

“I want to be around for her as long as I can,” he said. “You hope to be here for the graduation and wedding, but you prepare just in case.”

Devereaux is working to make the burden as light as possible when the inevitable happens. He has been recording a video for his wife and daughter.

“Death is like birth,” he said. “You’re supposed to make it enjoyable as much as you can.”

NORTH ANDOVER — An amazing laugh. Dynamic blue eyes. A smile that lit up the room. These are the things Fiona Maguire will remember about her husband Peter Devereaux, a Peabody native and well-liked Marine who died Thursday after a six-year battle with male breast cancer.