DUSTIN LUCA/Staff photoPublic officials and others pose for a photo after touring Salem Pantry efforts at their headquarters at Shetland Park and, seen here, a pop-up pantry on Loring Avenue Wednesday morning. 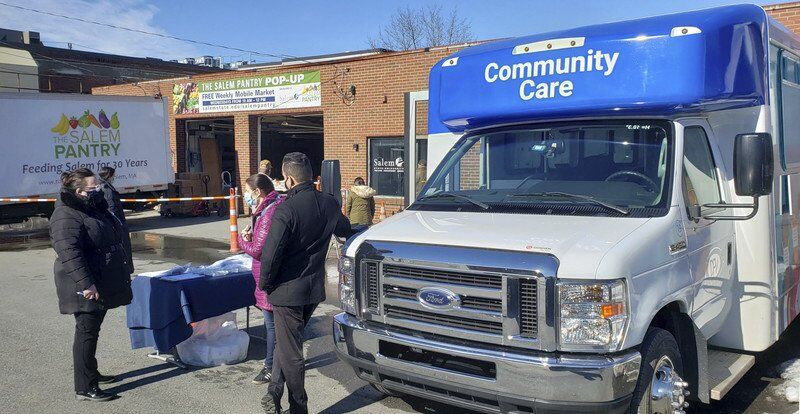 DUSTIN LUCA/Staff photoMass General Brigham staff stand with one of the organization’s community health vans at a Salem Pantry pop-up on Loring Avenue in Salem on Wednesday morning.

DUSTIN LUCA/Staff photoPublic officials and others pose for a photo after touring Salem Pantry efforts at their headquarters at Shetland Park and, seen here, a pop-up pantry on Loring Avenue Wednesday morning.

DUSTIN LUCA/Staff photoMass General Brigham staff stand with one of the organization’s community health vans at a Salem Pantry pop-up on Loring Avenue in Salem on Wednesday morning.

They all held empty reusable bags that, minutes later, would be filled by the Salem Pantry.

“We’re open, come on in,” shouted Alice Merkl, a downtown Salem resident and volunteer at Salem Pantry’s pop-up offering, to a customer looking over a gathering of public officials touring the facility. “We just have a big crowd today.”

Since the start of the COVID-19 pandemic, partnerships have emerged to streamline the region’s response. Pantries have set up weekly events throughout the region to make access to food easier, and, more recently, neighboring towns have begun pooling resources to improve access to COVID-19 vaccine.

As each month goes by, the pop-ups have offered more than food. For instance, on Wednesday, workers with Mass General Brigham set up a van and table of kits with masks, sanitizer and information on vaccines in multiple languages.

“Each day of the week, we’re at a different food pantry,” said Deidra Smith, a social worker with Mass General Brigham and one of its community health vans. “We’re at Lynn Monday and Tuesday, and Wednesday here, Thursday Peabody, and Friday Lynn.”

Inside the pop-up pantry, Merkl was helping to register visitors and handing out information on Salem Skipper, the city’s new ride-sharing service.

“We’ve had guests that I’ve seen waiting for a lift here,” Merkl said. “This really is the best outreach for the community, because this is where people are still physically coming — and it’s a great resource for information when we have collaborative efforts.”

On Wednesday, Salem Pantry Executive Director Robyn Burns showed off the organization’s new headquarters at Shetland Park to those who helped support it. Among them: state Sen. Joan Lovely and state Rep. Paul Tucker, both Salem Democrats. The tour ended on Loring Avenue.

“We’re pretty busy every day,” Burns said to the group, “but it’s a little different each day.”

Speaking after the tour, Burns said “anchor institutions” have made the pantry’s work vital over the past year. People are still trying to avoid choosing between paying for rent and paying for food, and use of the pantry has increased as such, she has said.

“For us, to be able to set up here at Salem State University, or Palmer Cove Park... and to have the Census, the League of Women Voters, North Shore Medical Center, the North Shore CDC... those partnerships we’ve formed in the past year are going to continue,” Burns said. “I don’t know the shape of them, but there’s a power in collaborative organizations working together. It just makes sense for people to be forming little hubs around that.”

“It’s heartwarming to be able to see people feed people,” Lovely said. “It shows the tremendous need, and we actually have a bill filed — a hunger pilot program on college campuses — that actually ties into what’s happening here already.”

“When students migrate back to campuses, once we get the legislation through, we’ll be able to feed students as well,” Lovely said. “Together, we get it done.”