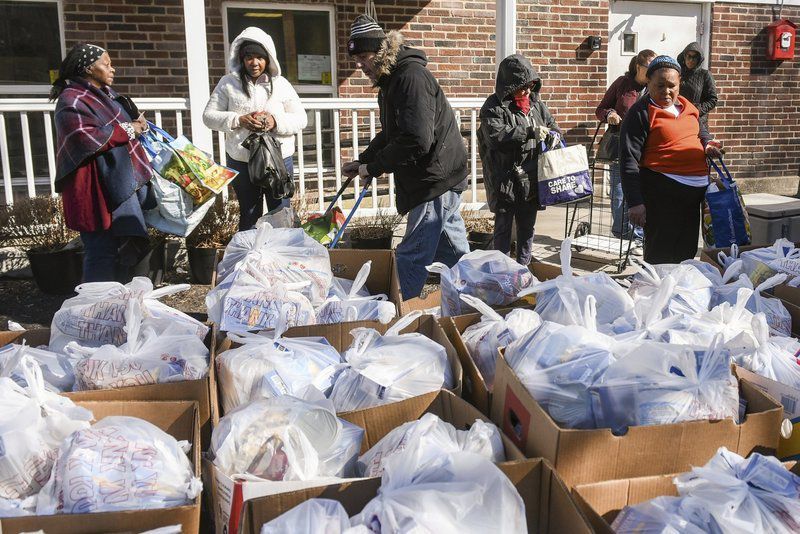 JAIME CAMPOS/Staff photoPeople stand in line to receive bags of groceries Monday outside the Citizens Inn Haven from Hunger food pantry in Peabody. 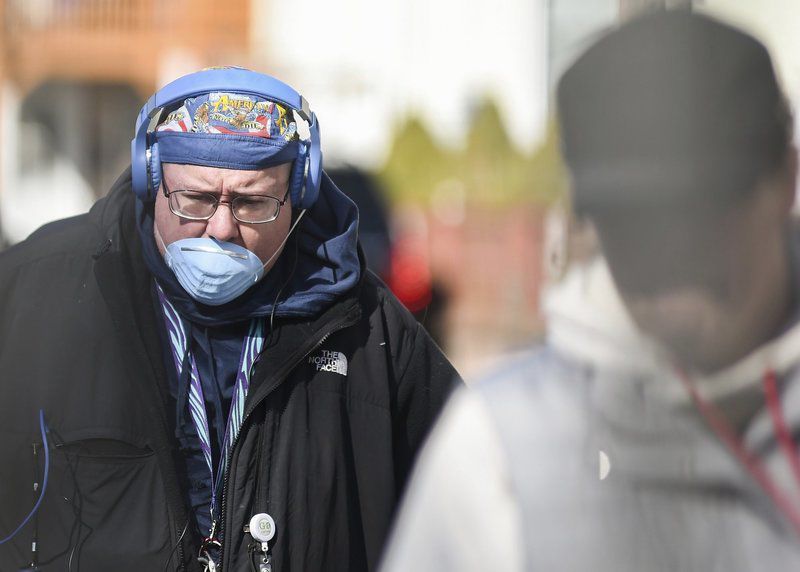 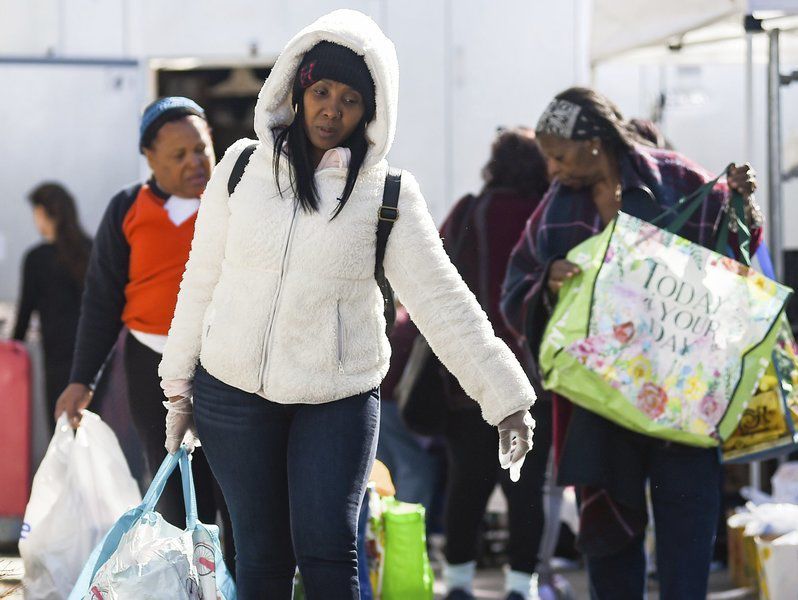 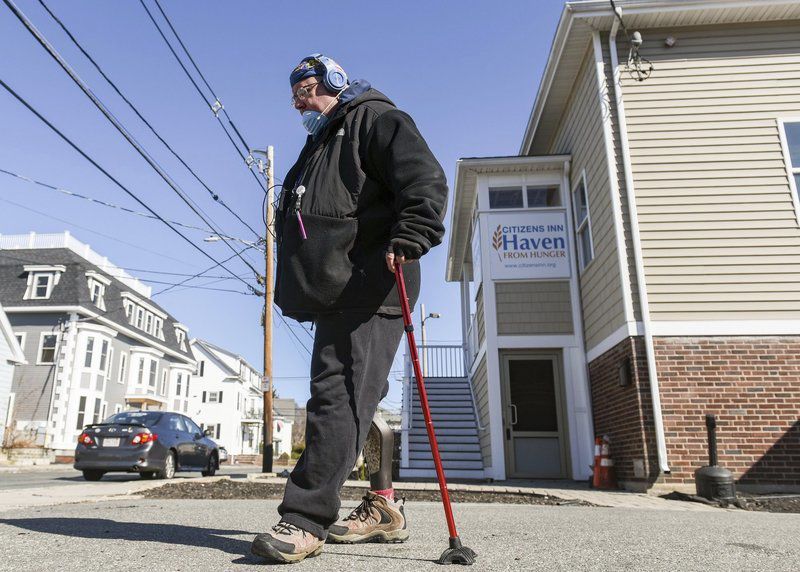 JAIME CAMPOS/Staff photoBilly Arsenault of Salem walks back to his car Monday after receiving groceries at the Citizens Inn Haven from Hunger food pantry in Peabody. 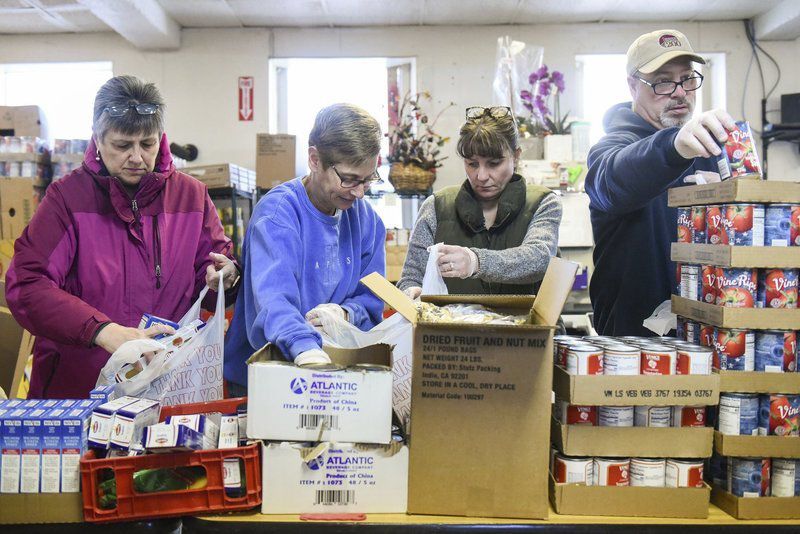 JAIME CAMPOS/Staff photoVolunteers bag food items Monday to be distributed to people in need at the Citizens Inn Haven from Hunger food pantry in Peabody. 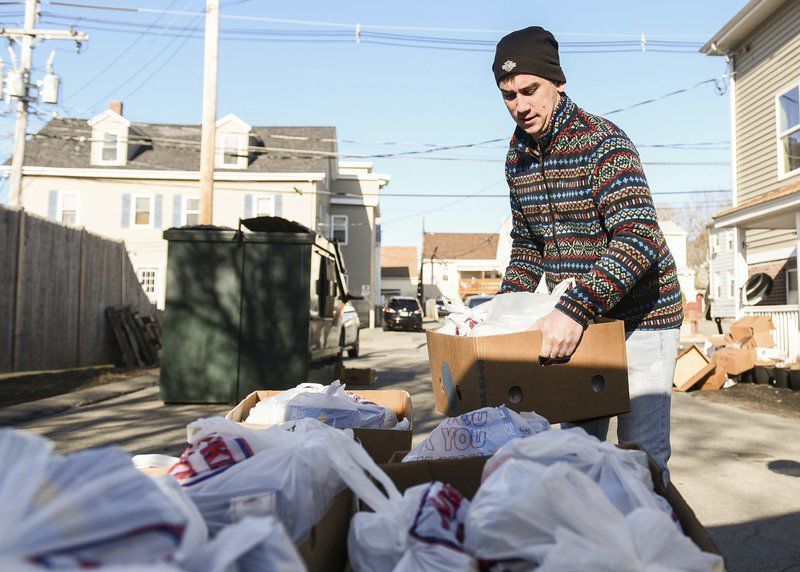 JAIME CAMPOS/Staff photoPeabody resident and Citizens Inn Haven from Hunger volunteer Matt Mogavero places a box filled with food along with other boxes to be given to those in need. 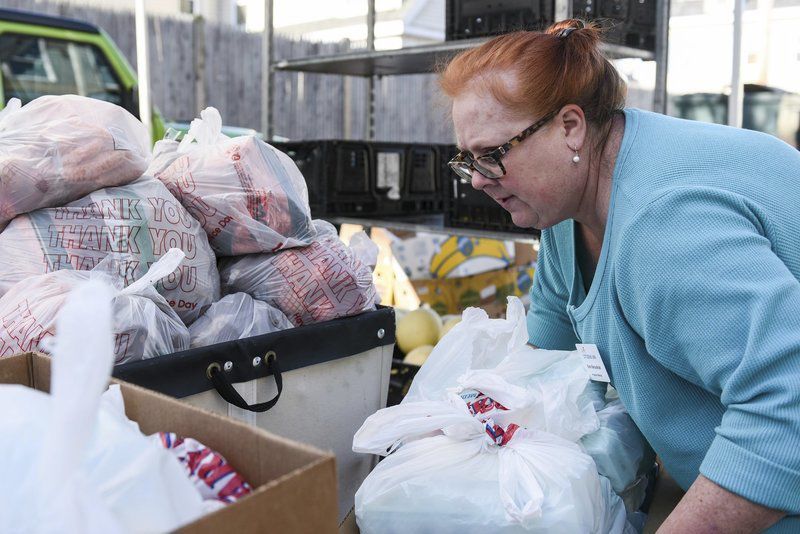 JAIME CAMPOS/Staff photoCitizens Inn Program Director Kate Benashski lifts a box filled with food items to be given to those in need at the Citizens Inn Haven from Hunger food pantry Monday in Peabody.

JAIME CAMPOS/Staff photoPeople stand in line to receive bags of groceries Monday outside the Citizens Inn Haven from Hunger food pantry in Peabody.

JAIME CAMPOS/Staff photoBilly Arsenault of Salem walks back to his car Monday after receiving groceries at the Citizens Inn Haven from Hunger food pantry in Peabody.

JAIME CAMPOS/Staff photoVolunteers bag food items Monday to be distributed to people in need at the Citizens Inn Haven from Hunger food pantry in Peabody.

JAIME CAMPOS/Staff photoPeabody resident and Citizens Inn Haven from Hunger volunteer Matt Mogavero places a box filled with food along with other boxes to be given to those in need.

JAIME CAMPOS/Staff photoCitizens Inn Program Director Kate Benashski lifts a box filled with food items to be given to those in need at the Citizens Inn Haven from Hunger food pantry Monday in Peabody.

PEABODY — Billy Arsenault wore a light blue face mask over his nose and mouth Monday morning as he arrived to get bags of groceries from Citizens Inn Haven from Hunger.

The Wallis Street food pantry is also taking a number of precautions amid concern over the spread of the coronavirus. For instance, instead of allowing clients inside to shop, the pantry, which serves residents of Salem, Peabody and Lynnfield, offered pre-bagged groceries outside in its driveway.

Arsenault, who walks with a limp from a prosthetic leg, said he’s not too concerned about the coronavirus — he already takes precautions to preserve his health.

“I’m more concerned about everything they are shutting down,” he said. “Yeah, that’s not good.”

“The coronavirus doesn’t keep us away, because the people still need us,” said Susan King of Peabody, who volunteered on Monday along with her son, Cameron, a student at Essex Tech.

Program director Kate Benashski said up to 150 families come to the food pantry a day.

“We have tried to minimize the population density and maximize the social distancing, but we minimize the number of people who come into contact with surfaces that might get contaminated,” Benashski said.

In addition, the community meals program will switch to a dinner takeout service with “very hearty to-go meals for anyone that comes and wants to-go meals,” she said. For dinner guests in frail health, Haven from Hunger will deliver their meals.

On Thursday, as concern about the coronavirus spread, 10,000 pounds of food “went out the door,” she said. They expected to distribute another 10,000 to 12,000 pounds on Monday, including food packaged for some Peabody elementary students.

In addition to a stack of groceries for the food pantry’s clients, boxes of food donations for the Welch and McCarthy elementary schools piled in the driveway Monday, awaiting to be delivered. Roughly 2,200 students are part of the city’s free and reduced lunch program, and all will receive meals at home from the school department. Haven from Hunger plans to supplement those meals with bags of groceries, Benashski said.

“Today we are going to be able to supply McCarthy School and Welch School,” said Corey Jackson, executive director of the Citizens Inn, about the schools whose population have the greatest need. “So, that’s going to be about 500 households, 500 kids. Next Monday, we will do all 2,200 kids.”

Because of the school shutdown’s sudden nature, the food pantry did not have enough food for every student. The plan is to make trips to the Greater Boston Food Pantry throughout the week with two trucks to get enough stock so food can be delivered to students next Monday. This is being done in addition to the regular pantry operation.

“I really worry about some of the families who are hourly workers or who are service industry workers whose businesses are effectively shut down or quite limited in terms of the number of hours they are able to work, Benashski said. “If they don’t work, they don’t get paid, it’s as simple as that.”

While Benashski worries that the demand will increase and the needs will become greater in the coming weeks, she’s thankful that the food pantry’s supply chain hasn’t yet been disrupted. Like other pantries, Haven from Hunger depends on “rescuing” food that’s close to expiring from restaurants and supermarkets.

“It’s been very light because people went out and emptied the shelves,” said Benashski of the recent runs on supermarkets. They are working with the Greater Boston Food Bank to secure greater quantities of food.

School Committee member Jarrod Hochman, who also the runs the No Child Goes Hungry in Peabody supplemental meals backpack program, was among the volunteers at Haven from Hunger Monday. He said the school department is delivering 10 meals to its 2,200 students in the free and reduced lunch program each Monday — five lunches and five breakfasts for the week.

The food service department prepared the meals, which were delivered by the transportation department with the help of volunteers.

No Child Goes Hungry will do its regular delivery on Friday, going door-to-door delivering backpacks.

“We are trying to make sure that everyone, both adult and child is at least fed during this crisis,” Hochman said. Over the weekend, he received more than 1,000 pounds of food donations by residents on his back porch. “The community is really stepping up. Peabody pride is being shown.”

Clients who came Monday to pick up groceries had mixed feelings about the coronavirus and the state’s response to slow the spread.

Altagracia Florian of Salem, a Spanish-speaking client who spoke through a translator, said she’s “in panic attack.”

“She said we are in panic attack because the people have to understand that it’s biblical (what) happened,” said Eduviges Reynoso of Salem, translating for Florian. “This is in the Bible. And we have to be prepared and looking for God.”

Still, Florian said Haven from Hunger’s efforts to help others is “very excellent, because a lot of people don’t have food, because someone don’t work, and they have to bring the food for the kids in home.”

Tiffany Kileleman of Salem is attending college full-time and is a stay-at-home mom. She receives food stamps for her son, who is disabled, and now is looking after four kids who are home from school through the first week of April.

“I think it’s a little drastic,” she said of the state’s restrictions as she loaded bundles of food into a car. “I think where everyone’s panicking, and I think taking kids out of schools, closing everything down, I think it’s a little extreme, but then again it could be preparing us for something that we don’t know, so, all we can do is our best, you know, feed the kids and keep them occupied for the next month. They get extended spring break.”

Roxana Urrutia said she is out of work as an assistant teacher as she gets her certification, and Alvaro Herrera is only working part-time at Salem Hospital as he looks after his teenage kids.

Herrera said he’s not worried about the virus’s spread.

“I don’t really think I have to ... but if it’s necessary we are going to have to stay inside,” he said. “But I’m not worried. I just take precautions like washing hands and things like that.”

Urrutia said being out of work for several weeks is going to create hardships for people.

“There’s the bills, the rent you have to pay,” she said.

Citizens Inn Haven from Hunger is asking North Shore residents looking to donate to give money, which not only pays for food, but fuel for transportation, a major expense for the agency. To donate online, visit citizensinn.org.

Any family that is part of Peabody’s free and reduced lunch program that did not receive meals on Monday can pick them up at the Higgins Middle School (middle-school students), 85 Perkins St., or the Welch School (elementary school students), 50 Swampscott Ave., Tuesday from 9 to 11 a.m. Any family that did not receive enough food to last can come to the Higgins Middle School on Wednesday from 1 to 3 p.m.