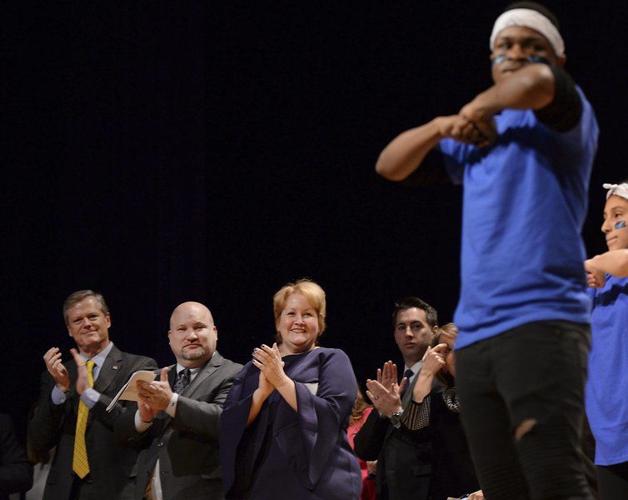 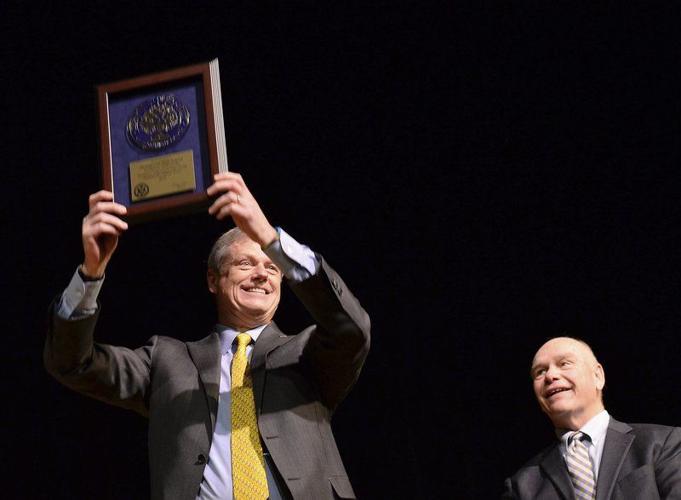 PAUL BILODEAU/Staff photoIt's a different kind of trophy. Gov. Charlie Baker proudly shows off the Blue Ribbon Award plaque to the crowd at Swampscott High School as principal Larry Murphy looks on. Baker, who was on the building committee that oversaw construction of the high school a dozen years ago and whose children graduated from there, took part in a special celebration of the national award with staff and students Thursday morning. The National Blue Ribbon Schools Program recognizes public and private schools based on their overall academic excellence or their progress in closing achievement gaps among student subgroups.

PAUL BILODEAU/Staff photoIt's a different kind of trophy. Gov. Charlie Baker proudly shows off the Blue Ribbon Award plaque to the crowd at Swampscott High School as principal Larry Murphy looks on. Baker, who was on the building committee that oversaw construction of the high school a dozen years ago and whose children graduated from there, took part in a special celebration of the national award with staff and students Thursday morning. The National Blue Ribbon Schools Program recognizes public and private schools based on their overall academic excellence or their progress in closing achievement gaps among student subgroups.

SWAMPSCOTT — It was a proud moment for Gov. Charlie Baker Thursday morning, as he helped celebrate his town's high school for earning the distinction of a National Blue Ribbon for its efforts in closing the achievement gap with at-risk students.

Baker drew cheers from the 700 students and dozens of faculty assembled in the Swampscott High auditorium when he hoisted the blue ribbon plaque above his head before posing for photos on stage with school officials and others invited to attend the ceremony.

"It's very special for me, and I know for many of the folks who are here who were part of that community and that building committee to see what's gone on inside the building," Baker said. "I mean, a building is just four walls, and a floor and a ceiling. In the end, it's what actually happens inside that matters. And, to all of you, I would just say congratulations, this is a big statement about what you have done."

Baker, the pride evident in his voice as he spoke, noted his children went through the school system, and he also had a hand in the new high school building at 200 Essex St., which first opened in 2007.

A former selectman in town, he served on the building committee that oversaw the construction of the school, "and went through the fun and games associated with getting it sited and getting it developed," he said.

On Thursday, the home of Big Blue celebrated what was an award — as a National Blue Ribbon School — from the U.S. Department of Education last fall.

Swampscott High was just one of three schools in Massachusetts to be recognized.

Jakious said he was there on behalf of Moulton who had votes in Washington and who sent his regrets.

"This really represents the best of the best among schools in the country," Jakious said, "in academic performance, graduation and school improvement, and Swampscott truly deserves this honor."

There are about 132,000 schools in the United States, and last year, just 349 received the award, Superintendent Pamela Angelakis said.

The chance of winning was 0.2 percent. It's like someone closing their eyes, reaching into a jar of 500 jelly beans of all different colors and coming up with the only blue one in the jar.

"Think about how fortunate you would feel at beating those astronomical odds," Angelakis said. "You had a point two percent chance of getting what you wanted and it happened. Now you can appreciate how everyone associated with Swampscott High School feels at why we are celebrating today."

Swampscott High was chosen for its progress in closing the achievement gap for four student groups often considered to be at risk: Minority students, English language learners, those with special needs and the economically disadvantaged.

Swampscott High draws students not just from Swampscott, but Nahant and Boston as well, the latter because the town is part of the Metco program meant to foster racial diversity and enhanced educational opportunities.

"It (the blue ribbon) proved we're not just teaching top tier students," Angelakis said, "that we understand how diverse our population is and our obligation to position every student for success."

In January 2018, the U.S. Department of Education notified the school it was eligible to apply, Kohut said.

"We then submitted an application highlighting the wonderful things that happened within the four walls of this building, such as students in English class analyzing literature, artists at work creating murals and budding scientists running experiments."

Angelakis said Kohut and Knowles "filled the leadership void at the school in a time of transition and directed a team of professional educators who excelled in their jobs under challenging circumstances."

The school currently has an interim principal, but Kohut has been named for the permanent job for the coming school year. Angelakis said they can finally let interim principal Larry Murphy "retire for real."

Murphy was the first principal at the new building when it opened in 2007. He served as the high school principal from 2006 to 2009, and had retired in 2015, but then stepped in when Robert Murphy left Swampscott High midway through the 2017-2018 school year.

On Thursday, Baker stayed for about an hour before leaving the ceremony, just after the chorus sang an emotional rendition of Pinkzebra's "We Won't Stop Dreaming" that brought the crowd to its feet. The school band, the Step Team, and Dance Team also performed.

But the governor's tall height would have come in handy when officials later went outside to reveal the new circular blue ribbon plaque installed by the school's front entrance.

When officials went to pull down a cloth covering the plaque, it snagged at the top. Unable to free the cloth, officials asked Senior Joe Varghese to help, and he was able to use his height, plus a good jump, to make the blue reveal.