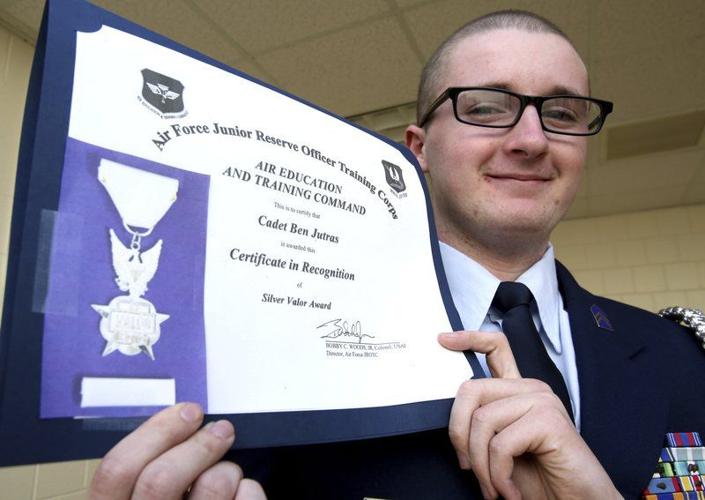 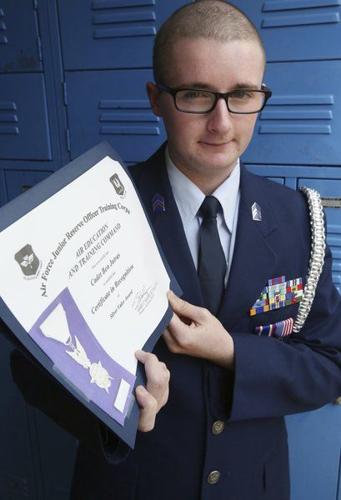 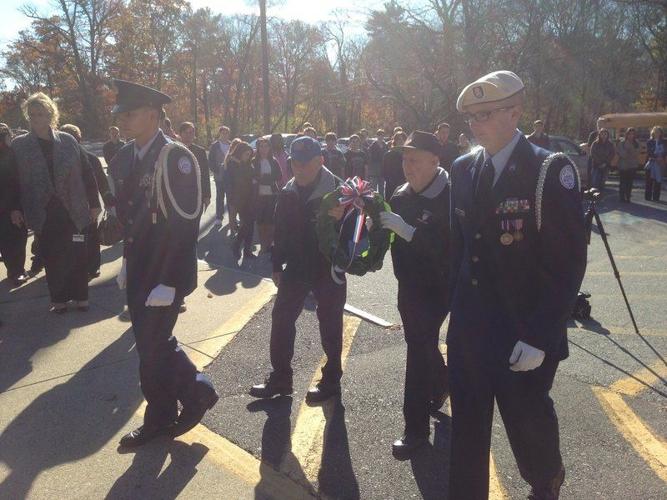 John Castelluccio/staff photoMaurice Sachs and Ray Silva of the Peabody Veterans Council lay a memorial wreath during a Veterans Day ceremony at Peabody Veterans Memorial High School on Monday. The two veterans are flanked by AFJROTC Cadets. Ben Jutras is at right. 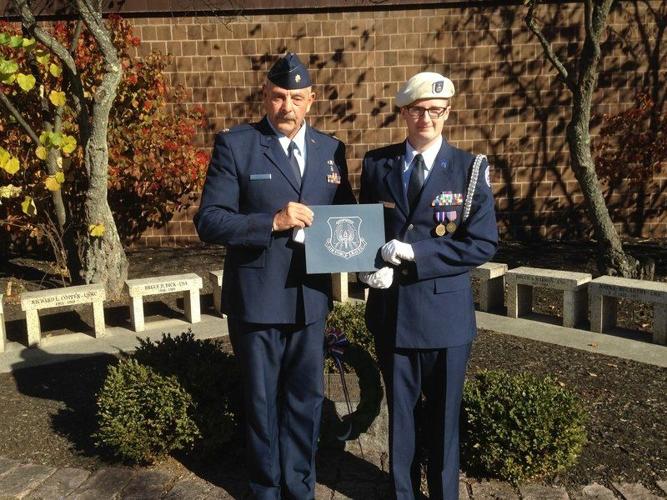 John Castelluccio/staff photoMaurice Sachs and Ray Silva of the Peabody Veterans Council lay a memorial wreath during a Veterans Day ceremony at Peabody Veterans Memorial High School on Monday. The two veterans are flanked by AFJROTC Cadets. Ben Jutras is at right.

Ben Jutras was at home on the afternoon of Jan. 7, watching his younger brother and sister, when he heard a strange noise. He went to investigate and discovered a fire in the Proctor Street building.

Thinking quickly, he grabbed his 13-year-old brother and 8-year-old sister and rushed with them from the warmth of the first-floor apartment into the frigid, 10-degree weather outside. All three went to a neighbor’s house, where Ben called 911.

Within minutes, firefighters arrived to find heavy flames pouring from a bedroom window of the multifamily home. Firefighters knocked down the flames, sparked by a faulty power strip, within 20 minutes, but the building was so heavily damaged that it was deemed uninhabitable until repairs were made.

On Monday, Jutras, a 17-year-old cadet in the Air Force Junior ROTC program at Peabody High, was recognized with a Silver Valor Award for exemplifying the same kind of spirit and courage as the veterans he and his classmates were honoring at their Veterans Day ceremony.

“The quick and decisive actions of Cadet Jutras were instrumental to a positive outcome and safety of all involved,” said Maj. Ralph Ruocco, an instructor in the school’s JROTC program. “I would not expect any less from Ben — he is a mature young man and a leader in the Corps of Cadets.”

Ruocco presented Jutras with a certificate; the actual medal and ribbon are expected to arrive any day now.

Ruocco said they just found out about the national award last week. It’s the first time a Peabody cadet has been so honored. Ruocco explained that the Silver Valor Award is the second-highest commendation bestowed by the Air Force JROTC and recognizes a voluntary lifesaving act of heroism that didn’t risk life and limb of the cadet. That’s the only difference between the silver and gold awards.

A statement read by Ruocco also included praise from Deputy fire Chief Paul Hinchion for Jutras’ “instinctive” actions and quick thinking on the day of the fire.

U.S. Air Force Col. Bobby Woods, who approved the award, said in a statement, “[Ben’s] actions in dealing with a life-threatening situation were exemplary and unselfish. I am proud to have this fine cadet on our team. He emulates our core values of integrity first, service before self and excellence in all we do.”

Monday’s ceremony was held in the front courtyard of the school, where benches dedicated to 13 Peabody veterans offer a daily reminder of the sacrifices made by Tanner City soldiers. Principal Eric Buckley reminded parents, students and teachers that it’s “Peabody Veterans Memorial High School,” not just Peabody High.

“The reason you’re off from school tomorrow is because of our veterans,” he said.

The service included a performance from the student chorale. Senior Nicholas Blaisdell was presented with this year’s essay award from the Peabody Veterans Council for his essay on the reconstruction of postwar Japan by the U.S. military after World War II.