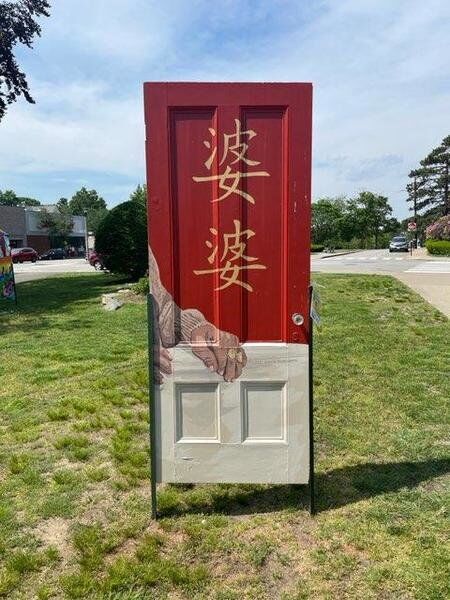 Courtesy photoThe back of the door, seen here, includes two Cantonese characters making up the word "Por Por," or maternal grandmother, and Chin's hands resting on the back of a chair as the mural wraps from front to back. 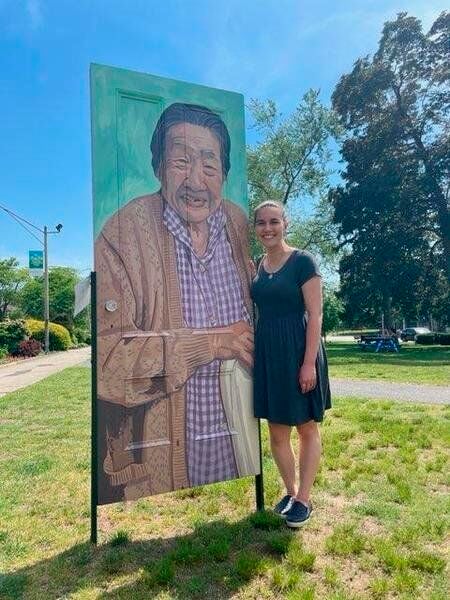 Courtesy photoBeverly resident Amanda Beard Garcia stands with a door she painted honoring her Chinese maternal grandmother, Hang Chin, that was on display in Newton before being vandalized this week.

Courtesy photoThe back of the door, seen here, includes two Cantonese characters making up the word "Por Por," or maternal grandmother, and Chin's hands resting on the back of a chair as the mural wraps from front to back.

Courtesy photoBeverly resident Amanda Beard Garcia stands with a door she painted honoring her Chinese maternal grandmother, Hang Chin, that was on display in Newton before being vandalized this week.

NEWTON — A door painted to honor a Beverly resident's Asian grandmother is being put on more prominent display after it was damaged in a string of recent attacks targeting Newton's Asian American community.

Amanda Beard Garcia, of Beverly, painted one of 25 recycled wooden doors making up a citywide public art project titled Newton Out Doors. Launched by Newton Community Pride, the project spread the doors across eight areas of the city "to promote the walkability and economic vitality of Newton's unique village centers."

The front of Garcia's door featured a sketch of her Chinese grandmother Hang Chin, who died in 2018, with a green background. The mural wraps around the back to include her hands draped across the back of a chair, below two Cantonese characters that read "Por Por," the Cantonese word for maternal grandmother. Garcia said the word is also a term of endearment for an older woman whom the speaker holds in high regard.

"She spent most of her life in Brookline, which is right next door" to Newton, Garcia said. "It was also partially inspired by me deep-diving into my own Asian-American heritage and trying to heal from all of the anti-Asian racism that has been happening not only during the pandemic but throughout forever, and thinking about what my Por Por would think about what was going on."

But by Wednesday afternoon, Garcia said paint had been stripped away from portions of the back of the door — the side with Cantonese lettering.

The damage impacted a portion of the mural — much of the lettering was still intact, and front was untouched.

In a post on social media Wednesday afternoon, Newton Mayor Ruthanne Fuller addressed the damage, along with an incident involving a jogger attacking a "Stop Asian Hate" yard sign and an earlier string of house breaks in the city that targeted Asian Americans.

"I'm disheartened by not just these incidents but also the spate of house breaks and the increase in verbal harassment and physical acts of bias-related incidents against Asians across the country in the last year and a half," Fuller wrote. "I'm continuing to ask all of us to keep our eyes open and speak up."

Garcia said she wasn't surprised to learn of the vandalism, but it still took time to process. She ultimately told the city she doesn't have the emotional bandwidth to make repairs.

"The paint was stripped off in chunks, and I think trying to repaint it or repair it in that way wouldn't be done gracefully," Garcia said.

Officials also considered removing the door from the display.

"I was concerned others would be encouraged to continue picking at it," Garcia said. "They suggested putting it in a different spot where it might be under more surveillance."

That spot, it turns out, is directly in front of City Hall, Garcia said, "which is cool."

"It's kind of overwhelming. I think I'm processing the incident, as well as the response and aftermath too," Garcia said. "I have so much gratitude for the community, that people care about this and care about the other assaults on their neighbors, and that they're wanting to amplify the voices of other Asian Americans in the community."

Middleton - William D. Baxter III, 51, of Middleton, passed away due to sudden cardiac arrest on Wednesday, October 20, 2021, at Beverly Hospital. Billy was born in Melrose to his beloved parents, Bette M. (Doyle) Baxter and the late William D. Baxter II. He was the loving husband and best f…