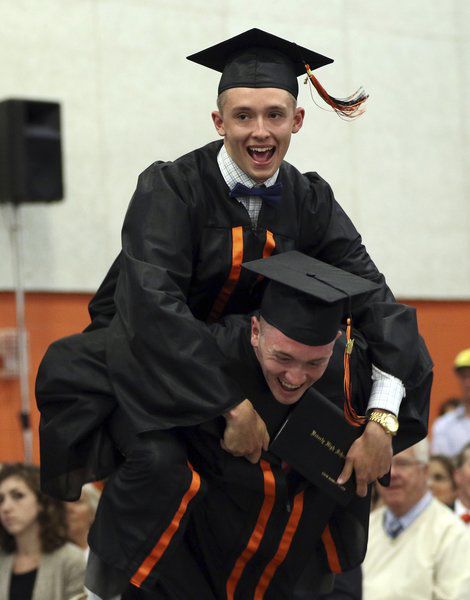 DAVID LE/Staff photoBeverly High School graduate Colin Oliver jumps on the shoulders of his twin brother Casey, as they piggyback their way back to their seats after receiving their diplomas on Sunday afternoon. 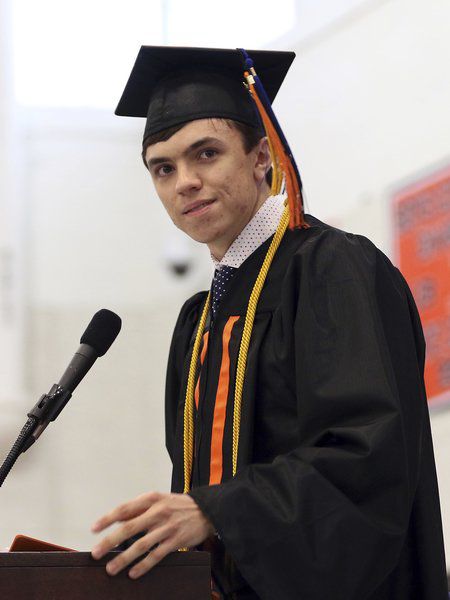 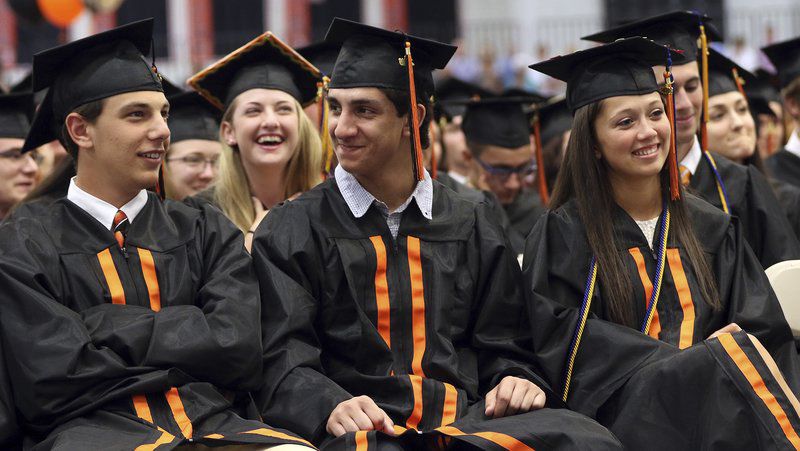 DAVID LE/Staff photoBeverly High School graduate Colin Oliver jumps on the shoulders of his twin brother Casey, as they piggyback their way back to their seats after receiving their diplomas on Sunday afternoon.

BEVERLY — Celebrate accomplishments, but remember those who helped you get there.

That was one of the overarching messages the Beverly High School Class of 2016 received just before the graduates tossed their tasseled caps skyward, signifying the end of high school and the beginning of what's to come.

The graduates, plus their family and friends, crowded into the high school's field house on Sunday afternoon; the ceremony was moved from Hurd Stadium due to the uncooperative weather.

"Take time to thank the important guides in your life," Superintendent Steven Hiersche, referring to parents, guardians and friends who helped the graduates along the way.

Mayor Michael Cahill told the students to not settle, but to realize their own personal worth.

"Make good things happen for you in your life," he said, adding that this means a lot of hard work and the need to keep learning.

Kris Silverstein, the current school board president, spoke of how she remembers the class when the students had entered kindergarten. She said they have grown into talented athletes, scholars and artists, among other accomplishments.

"But mostly you are people who embrace the value of respect," she said. "You also celebrate each others' successes."

The ceremony took on a more somber note when the family of Marc Burns was called on stage to accept his diploma. Marc should have been walking across the stage with his classmates that afternoon, but he died, unexpectedly, nearly six years ago on June 23, 2012, a day before his 14th birthday. He would have entered Beverly High as a freshman that fall.

Since his death, the community has rallied to support his family and remember Marc. A road race was held annually for four years to raise money for a scholarship in his name.

Following a standing ovation for the Burns family, Principal Sean Gallagher gave the class advice on how to become successful.

"Achievers understand that to be successful, you need to take risks," he said. "We understand that it's not always easy to put yourself out there. ... We wish you all the best."

An interesting comparison: In his speech, Samuel Peterson compared the class graduating and moving on to when Alexander Hamilton, one of the nation's founding fathers, moved to the United States.