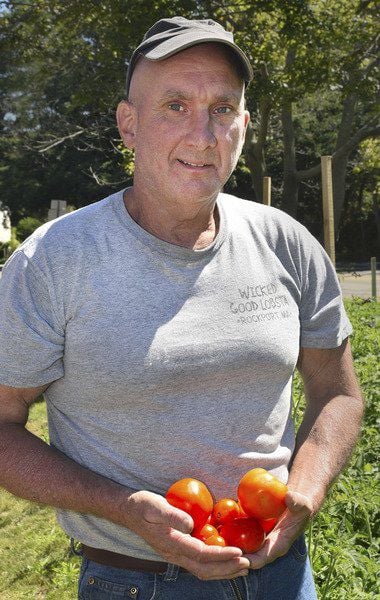 Photo by joebrownphotos.comBeverly's John Fallon with some of the tomato harvest that will be delivered to local agencies. 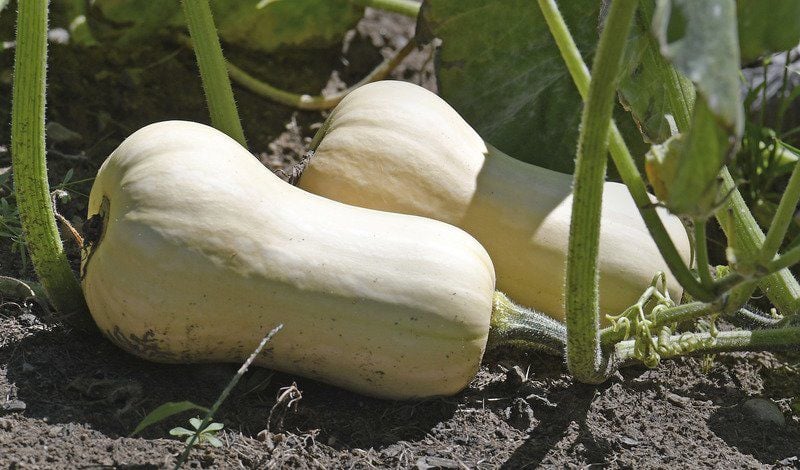 Photo by joebrownphotos.comButternut squash is ready to be harvested by John Fallon. 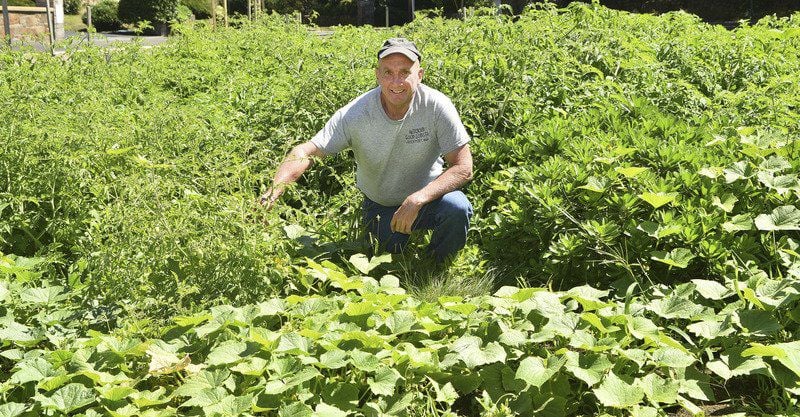 Photo by joebrownphotos.comBeverly's John Fallon kneels among the plants he grows in a 5,000-square-foot plot in a traffic island on Hale Street.

Photo by joebrownphotos.comBeverly's John Fallon with some of the tomato harvest that will be delivered to local agencies.

Photo by joebrownphotos.comButternut squash is ready to be harvested by John Fallon.

Photo by joebrownphotos.comBeverly's John Fallon kneels among the plants he grows in a 5,000-square-foot plot in a traffic island on Hale Street.

BEVERLY — Tending to vegetables is nothing new for John Fallon. The Beverly native learned how to cultivate his own crops as a child.

So when a green space presented an opportunity, he took it, even though it happened to be a traffic island in front of St. Margaret's Catholic Church on Hale Street.

Now, the fruits of Fallon's labors are being enjoyed all over the city. He donates what he grows to local church meal programs — First Baptist Church, First Parish Unitarian Universalist, St. Peter's Episcopal, Living Hope Church of the Nazarene, Ipswich and Memorial United Methodist, all of which provide lunch or dinner throughout the week — and to the River House homeless shelter.

Fallon, along with his brothers Brendan and Tom, grow vegetables in their own gardens at their homes. They also have three plots at the community gardens on Cole Street, along with the 5,000 square feet of space at the traffic island, which they call a "pocket farm." Fallon has even created a nonprofit, Clean Green Cities, Inc., which he hopes to use to further the work.

"This is all charity," Fallon said, as he looked over the traffic island garden on a recent morning. Still-growing green tomatoes dangled from their leafy vines, while footlong cucumbers soaked up the morning sun. "I don't take any money out of it, and I don't take any food out of it," he said.

The traffic island project began this year, Fallon said, though he began donating vegetables from his garden and his community plot in 2014.

Fallon said he was considering growing vegetables on the St. Margaret's property when he noticed the vast, empty tract of land in front of the church.

Since the island is state-owned, he applied to grow there as a beautification project. The state obliged, and Fallon received roughly 1,500 plant donations from local nurseries. After composting and prepping the soil, he began putting in plants in early June — "That's considered late," he said.

But with the amount of sunshine that pours down on the island, free of obstruction, some of the vegetables have already ripened and been harvested, while others are well on their way.

There's also an assortment of peppers and broccoli, along with arugula. The vegetables are surrounded by rows of flowers.

Fallon has a network of hoses surrounding and weaving through the plants for irrigation. The church supplies the water, and an anonymous donor agreed to pay for it, he said. Eventually he wants to have a water collection system that's fueled by solar panels with "drip tube irrigation lines."

He works seven days a week on his gardening, Fallon says, and hopes to be able to supply the churches and shelter all year. Much of the harvest could be frozen and distributed throughout the colder months, he explains.

While Fallon said he likes to keep his work low-key, he does want to put up signs identifying his project and letting people know where the vegetables go.

Those on the receiving end are grateful.

Cindy Beckford, marketing and development manager for River House, said Fallon dropped off his first donation of zucchini a few weeks ago. One of the shelter cooks was able to incorporate it into a dinner, and it fed all 36 people at the meal that night.

"I think it's wonderful what he's doing," Beckford said.

Fallon hopes the pocket farm will also serve as an "outdoor classroom" — Landmark School officials have shown interest in bringing their students there, he said. He also wants to make the space welcoming for the community, perhaps by including a stone bowl for dogs to drink from when their owners are out walking them.

He has lots of ideas for the future, going beyond Beverly and using his nonprofit for environmental projects. He'd love to take groups of volunteers on international trips, for example, to help areas affected by natural disasters to grow their own community gardens and irrigate them using sustainable resources, like the solar panel irrigation system.

For now, though, it's all about helping out the community he grew up in.