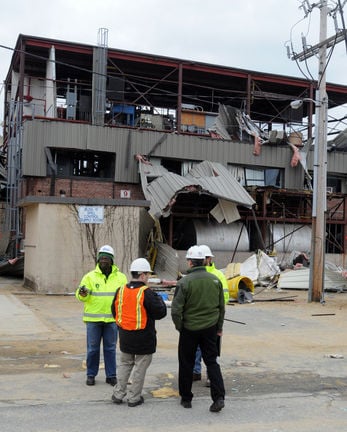 Investigators were on the scene yesterday of Sunday’s explosion and fire at the Bostik plant in Middleton. 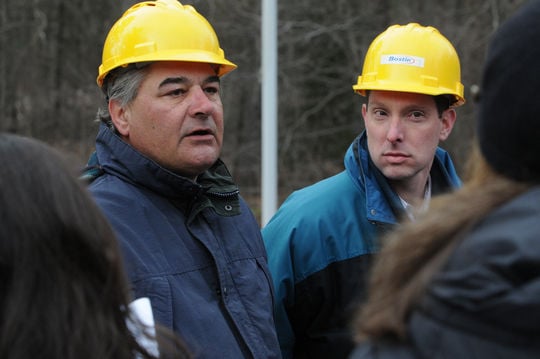 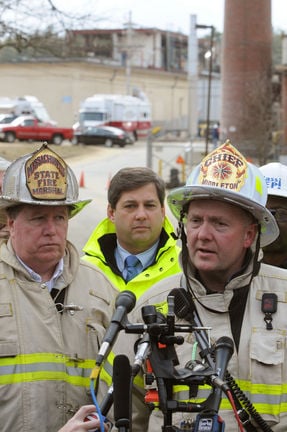 Investigators were on the scene yesterday of Sunday’s explosion and fire at the Bostik plant in Middleton.

MIDDLETON — The investigation of an explosion and fire at the Bostik adhesives manufacturing plant on Route 62 began yesterday with authorities interviewing plant employees on the Sunday-night shift, including four workers who suffered minor injuries.

The workers, three men and one woman, had been treated and released from the hospital by yesterday morning, State Fire Marshal Stephen Coan said. He also announced that a "multi-agency, multi-discipline task force" had launched an inquiry into the cause of a thunderous blast that shook the surrounding neighborhood and was heard as far away as Danvers.

"We're not in a position now to share any preliminary cause or to suggest much more about the details of the chemical process that was taking place at the time of the incident," Coan said at an afternoon press conference. Neither the company nor Middleton police would release the victims' names.

Middleton fire Chief Frank Twiss said the results in both cases indicate there is no threat to public health from contamination.

"There has never been any issue concerning air or water quality," Twiss said.

About a dozen people were working on Sunday when the explosion occurred.

"(That's) the normal operation on a Sunday night," said Nat Weiner, Bostik's plant manager. "We have parts of the plant that are a 24/7 operation."

The four employees who suffered injuries were working in an area of the facility where "solvent-based adhesives" are produced.

"It's basically putting resin in solvent to make a solvent-based adhesive," said Rich Dautilio, the plant's general manager. "What happened during the process (on Sunday)? We don't know."

It does involve mixing materials in what Weiner described as a "kettle." Bostik's representatives, however, did not know what substances were in use or the employees' proximity to the explosion source.

"They were in the building, but specific location I don't know at this point," Weiner said. Because of the ongoing state and local investigation, company officials said they had yet to speak with employees about the incident.

But Dautilio said they were "doing well." They did not break any bones or suffer burns.

"We're very happy there were no serious injuries to them," he said.

The adhesives they were making have industrial uses like food packaging, Dautilio said, and could be used to join the thin "layers of film" in the material of potato chip bags.

The investigation is being handled by state troopers assigned to the fire marshal's office and Middleton fire and police investigators with help from the federal Occupational Safety and Health Administration, the DEP and EPA. The state will also consult chemical processing specialists, Coan said.

'Still clearing out the debris'

Before the collection of physical evidence could begin yesterday, the affected structure needed to be secured and declared safe by structural engineers and the building inspector.

"Investigators will work until dark and will return here tomorrow and for the foreseeable future until, hopefully, we are able to determine a specific cause," Coan said.

The U.S. Chemical Safety Board in Washington, D.C., which sent a team of investigators here after the Danversport explosion in 2006, does not plan to go to Middleton.

"We're following up on it by phone right now," said spokesman Daniel Horowitz, who indicated they have spoken with Coan and other officials.

"It's certainly a serious event, but fortunately it does not appear to have caused a fatality or off-site damage, which are some of the factors we typically look at in deciding whether to commit our investigators."

The state Department of Public Safety, which investigates boiler explosions like the one at the Salem power plant in 2007 that killed three workers, is looking into the Middleton incident.

"We can't get into the building because they're still clearing out the debris, so we don't know exactly what happened yet," spokesman Terrel Harris said. "Our concern is whether a pressure vessel (i.e., boiler) was involved in any way in the explosion."

Until Sunday's explosion, OSHA had not been back to the plant in the past decade.

The state DEP found a "very, very small" amount of toluene in a water sample taken from the Ipswich River, which runs next to the plant, according to spokesman Ed Coletta. He said it was "nothing of significant environmental concern."

Toluene is a volatile chemical used at Bostik and many other manufacturing plants, according to the DEP.

"It was probably washed off the site by the firefighters' water," Coletta said.

A "slightly elevated" level of the same chemical was detected in an air monitor right at the plant. The DEP called the results "negligible."

The state agency said the chemical readings are "well within (safe) ranges," and no more testing is planned.

The agency, however, said it will take a look at the possibility there is asbestos mixed with the debris from the blast.

The DEP cited the company for "minor" issues in 2006 and ordered it to remove a protective cap from an exhaust stack. Bostik corrected the problems by 2007 and will be reinspected in 2012.

Twiss did not know a specific date when the Fire Department last inspected the plant, though he said the department visits it "frequently."

"We're here on non-emergency-type visits," he said. "They welcome us with open arms." A successful training exercise with the state's hazardous materials team was conducted eight months ago.

Twiss said the plant's "paperwork," including its underground flammables storage permit, were up to date. A license on file with the town clerk dated May 15, 1984, describes Bostik as a "solvent tank farm" and authorizes the company to store 120,000 gallons of "various industrial solvents" underground. A certificate of registration filed with the town said its license was amended last April but does not detail the changes.

Weiner acknowledged that within the last few months neighbors on Russell Street began complaining about a smell and throat and eye irritation that they blamed on the plant and the possible release of chemicals. Bostik has hired a "third party" to do odor monitoring.

"They haven't pinpointed anything in particular at this point," Weiner said.

The plant has suspended operation, and Middleton police will control access to it during the investigation.

It is the third incident, including Danvers and an explosion in Leominster in 2005, related to chemical processing that the state has investigated in recent years. Coan said the Board of Fire Prevention Regulations, the entity that develops the state fire code, is nearly finished creating new chemical process safety regulations. "I'm not suggesting that, if those regulations had been in place that what occurred here last night still could not have occurred," Coan said. "(But) I do believe that additional regulations were needed coming away from both Leominster and Danvers, and now Middleton just adds to my belief that we need further oversight."