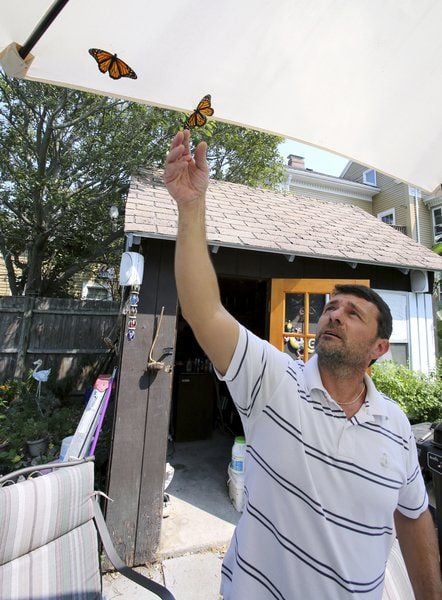 Dwayne Taylor lets two Monarch butterflies loose in his back yard by attaching them to the underside of an umbrella. 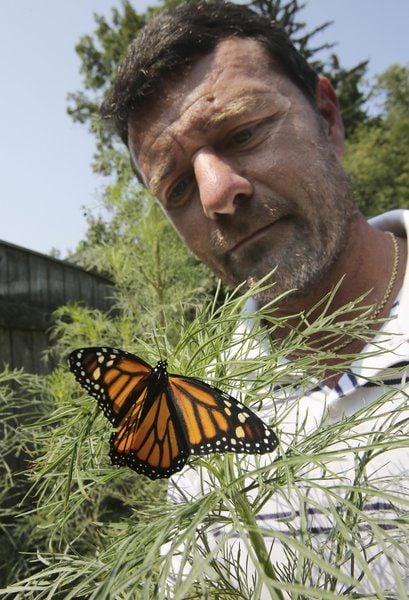 Salem resident Dwayne Taylor looks over a Monarch butterfly just released in his back yard. 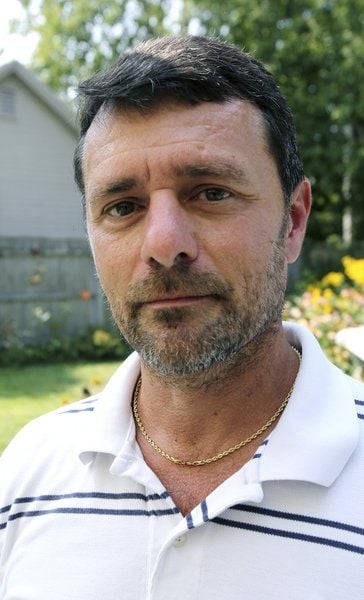 Monarch butterfly chrysalises in a row are getting ready to hatch. 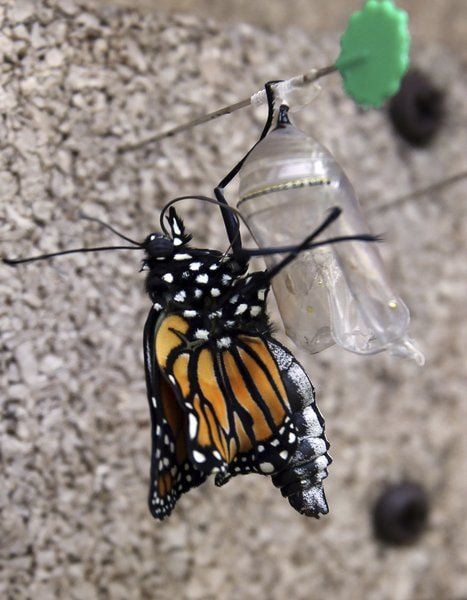 A Monarch butterfly hangs from a pin moments after exiting from its chrysalis. 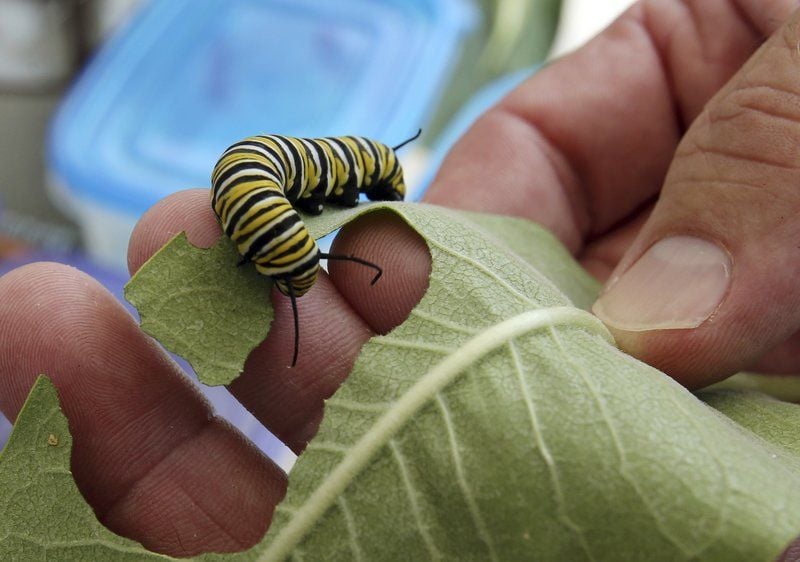 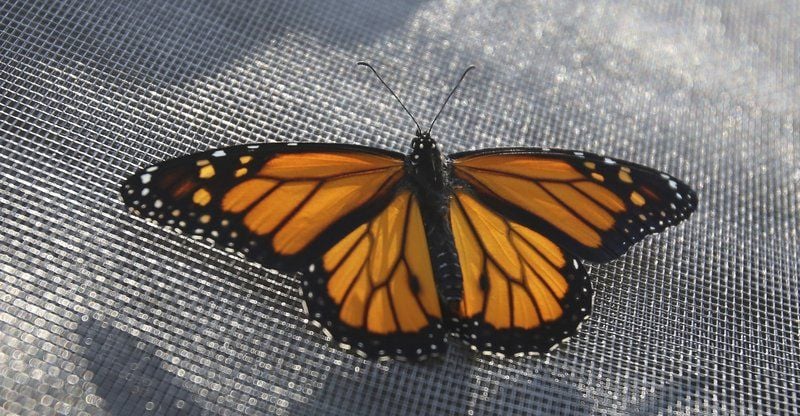 A just-released monarch butterfly spreads its wings on a screen at the Taylor home in Salem.

Dwayne Taylor lets two Monarch butterflies loose in his back yard by attaching them to the underside of an umbrella.

Salem resident Dwayne Taylor looks over a Monarch butterfly just released in his back yard.

Monarch butterfly chrysalises in a row are getting ready to hatch.

A Monarch butterfly hangs from a pin moments after exiting from its chrysalis.

A just-released monarch butterfly spreads its wings on a screen at the Taylor home in Salem.

SALEM — By day, Dwayne Taylor is an engineer with one of the world’s leading manufacturers of atomic clocks. But that’s just his day job.

By night, and on his lunch breaks every afternoon, the Dearborn Street resident wears a different hat. He harvests milkweed, searches high and low for eggs the size of a needle point, and oversees the care, custody and release of hundreds of Monarch butterflies every year.

Some of Taylor’s colleagues with Microsemi in Beverly call him “the Butterfly Whisperer,” he said. Truth be told, he prefers to be known as the Butterfly Man.

It’s what children in his neck of the city know him as, he said.

“The biggest year for me was 1,602 (butterflies released),” Taylor said, leaning back in a chair in his backyard-turned-butterfly haven. A few dozen feet behind him, a few butterflies fluttered in the wind, moving flower to flower.

While some may hang around, most of the Monarchs he has released have already started their migration southwest toward Mexico. He pushed past 400 released for the season by the end of Wednesday, he said.

Those not ready for release are scattered throughout his property. Dozens, if not hundreds, of chrysalises hang in protective boxes outside, various Ziploc containers and more.

Eggs and other early forms of the butterfly life cycle are protected indoors, where Taylor and his Monarch-making machine share a home with his wife, Jennifer.

Sitting beside him, Jennifer urged her husband to tell the story about how he “repairs” the butterflies.

“You can repair them,” Dwayne Taylor said. “You take some that you euthanized because a wing was crumpled and the other wing wasn’t... You know...  And I saved them, and you can repair them, put on superglue and patch it.”

Dwayne Taylor’s interest in Monarch butterflies started in 2007 while he and his wife were vacationing in Aruba. They visited the Butterfly Farm in Oranjestad, where the butterfly enthusiast picked up a book titled “Butterfly Gardening for the Northeast America,” he said.

“It was all about butterflies in this area, the Northeast, and how you can attract them,” Taylor said.

A later trip to another butterfly farm yielded a packet of milkweed seeds, giving the prospective butterfly gardener the key to attracting and later raising the insects, he said.

After raising and releasing his first butterfly, Taylor said he was hooked.

Now, much of the Taylor residence is a Monarch butterfly breeding ground.

“Every plant I have, I go through every night and look,” Dwayne Taylor said, pulling out an already-harvested leaf with a near-microscopic egg on its underside. “And you know where to look; you don’t look at every leaf.”

A Monarch female will lay about 500 eggs in the wild, of which about 2 percent will lead to mature butterflies, according to Taylor.

In his system, he said, the survival rate reaches 80 percent.

But he doesn’t run a butterfly business, Dwayne said. He does it because the butterfly needs allies in the Northeast.

“The Monarch itself isn’t in danger,” Taylor said. “They live all over the world. But because North America has this evolution of growth — of milkweed crops through the spring — they follow them.”

As the country gets warmer further north, milkweed crops push up across the country into New England. With them come Monarchs, Taylor explained.

But agriculture, for what it puts on the American dinner table, gets in the way.

“Crops are now resistant to herbicides and insecticides,” Taylor said. “Corn can be sprayed, and it kills all the milkweed around it and not the corn. And people want to beautify the land and their streets, so they cut (milkweed) down.”

Where the milkweed supply stops, so too do the butterflies.

“I’d like to continue to see the education of helping a species that’s on the brink,” Taylor said, “on the hairy edge of not being able to multiply enough to get back up here.”

Living next door to the Taylors, Salem resident Betty Andrade said she would “take six to seven Dwayne’s in the neighborhood. That’d be cool.”

“He’s educating,” Andrade said. “On Saturdays, he always seems to have a group over there.”

Taylor said people frequently reach out to him, asking to see the butterfly garden. They often leave with a chrysalis packed up or a small pouch of milkweed seeds, he said.

“I spoke at a Sunday school,” Taylor said. “I believe I’m going to be speaking at the beekeepers association in September as well as Friends of Greenlawn (Cemetery) in October.”

He speaks so much, he said he has developed a jingle — and with it, the support for New England-bound Monarchs spreads.

“I’ll give everybody little packs of seeds and say, ‘just plant it,’” Taylor said. “My slogan is, ‘plant a milkweed, host a Monarch.’ ”

And as his neighbor, Andrade doesn’t mind what’s going on, even if the insects “don’t stop at the fence.”

“He just wants everybody to understand butterflies and appreciate them,” she said, “and beautify the world. And we’re beautifying our little corner here with him.”