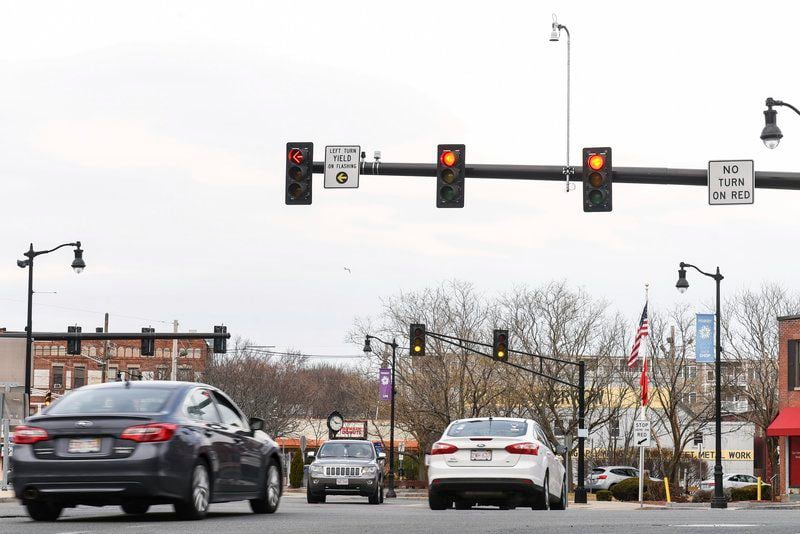 JAIME CAMPOS/Staff photoMotorists speed up to beat a red light Tuesday at a busy intersection in downtown Peabody. The state Senate is considering a proposal to allow communities to install cameras at intersections so they can catch drivers who run red lights. 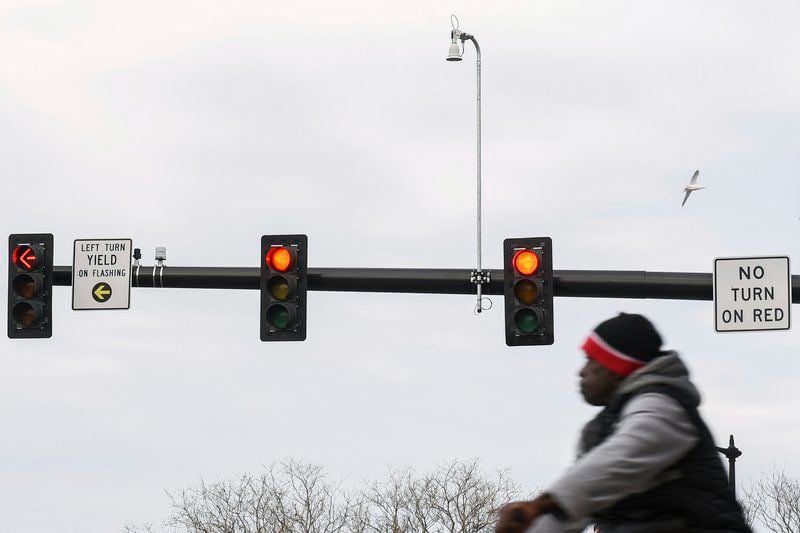 The state Senate is considering a proposal to allow communities to install red light cameras at intersections, so they can catch drivers who run red lights. JAIME CAMPOS/Staff photo 2/25/2020

JAIME CAMPOS/Staff photoMotorists speed up to beat a red light Tuesday at a busy intersection in downtown Peabody. The state Senate is considering a proposal to allow communities to install cameras at intersections so they can catch drivers who run red lights.

The state Senate is considering a proposal to allow communities to install red light cameras at intersections, so they can catch drivers who run red lights. JAIME CAMPOS/Staff photo 2/25/2020

On Thursday, the Senate is expected to take up a proposal that would allow some cities and towns to install cameras and automatically fine drivers for speeding, blocking intersections, making illegal right turns, illegally passing school buses or failing to stop for red lights. Fines would be capped at $25 per violation, under the proposal.

Communities that want automated traffic enforcement would have to hold public hearings and get approval from local governing boards to install cameras in specific locations.

Sen. Joan Lovely, D-Salem, said she backs the measure and has heard from constituents who say red-light runners and other traffic violations are endemic.

"It's a public safety issue," she said. "Drivers aren't paying attention to the rules of the road. They're running red lights, crosswalks and stop signs, and people are afraid."

Senate Minority Leader Bruce Tarr said he "supports the idea" but wants to tread slowly as lawmakers consider giving local governments the option to use the cameras.

He is advocating a pilot project in several communities to gauge the effectiveness of the traffic camera systems before allowing their use across the state.

"There are instances where it might make good sense, if you have an intersection where there's frequent red light running that has resulted in accidents," said Tarr, a Gloucester Republican. "However, deploying that statewide potentially makes the bill overly broad, so I think we need to test the concept."

Tarr has also filed amendments setting a five-year limit on the use of the cameras and limiting the use of images of the drivers or passengers, which would have to be destroyed absent a court order.

Overall, lawmakers will vote on at least two dozen amendments to the bill Thursday, when debate on the measure gets underway.

A similar proposal was approved by the Senate last year but wasn't taken up by the House of Representatives. Gov. Charlie Baker hasn't said whether he supports the bill.

Communities that add cameras to school buses would be exempt from that requirement.

The bill also limits violations for drivers going 5 miles above the speed limit or who commit violations to make way for emergency vehicles or to comply with another traffic law.

Violations captured on camera wouldn't result in insurance surcharges, nor would they become part of driving records kept by the Registry of Motor Vehicles.

At least 23 states, including Rhode Island, have passed laws allowing the use of traffic enforcement cameras, according to the Insurance Institute for Highway Safety.

Private contractors operate many systems, generating tickets that are then reviewed by police officers. Tickets arrive in the mail, and violators can appeal or pay. The private company gets a share of revenues generated by the ticket for operating the camera system.

Proponents of the high-speed surveillance equipment say it’s a proven way to save lives by reducing red-light runners, who are a leading cause of fatal crashes. They have killed more than 9,000 people in the past 10 years, according to the Federal Highway Administration. More than 165,000 motorists, cyclists, and pedestrians are injured every year by red-light runners, the agency says.

But the technology has critics, including libertarian groups that complain the real purpose is to raise money for police and local governments.

Critics point to research showing a rise in rear-end collisions in states where the cameras are in use, from motorists suddenly hitting the brakes to avoid getting a ticket.

The bill's primary sponsor, Sen. Will Brownsberger, D-Belmont, said in a recent blog post the proposal addresses concerns about privacy and possible abuse by local governments. Communities would be required to transfer net profits from use of cameras to the state and report each year to the Department of Transportation on the use of cameras.

Likewise, images taken by red-light camera systems cannot be used in unrelated court proceedings, and must be destroyed within 48 hours after a ticket is disposed, he said.

Brownsberger said "millions of traffic violations go undetected or ignored every day on the roads" because police don't have the resources to deal with the problem.

"In many municipalities today, the crush of traffic makes it impossible for local police to adequately enforce the traffic laws," he wrote. "Road safety is deteriorating as too many motorists push red lights, exceed speed limits on residential streets and block congested intersections. Automated enforcement using traffic cameras can help."