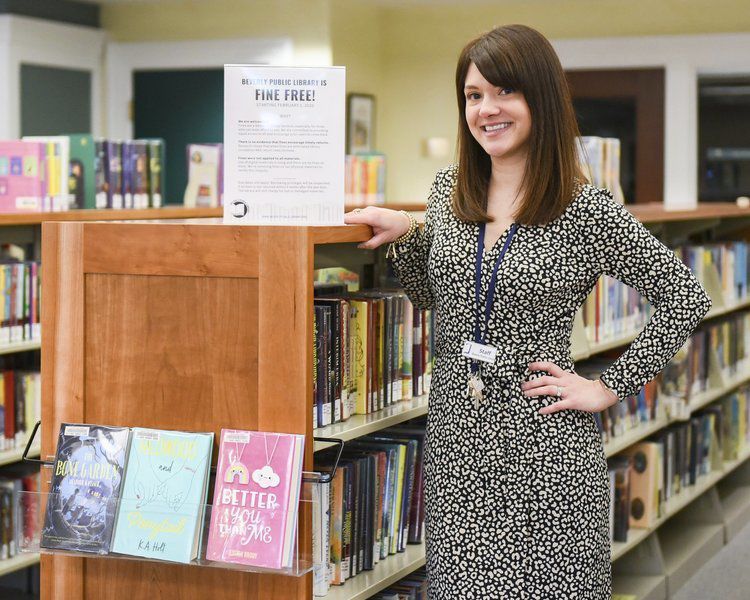 JAIME CAMPOS/Staff photoAssistant Library Director Allison Babin is looking forward to increased activity at her branch as fines for overdue books at the Beverly Public Library were eliminated effective Feb. 1. 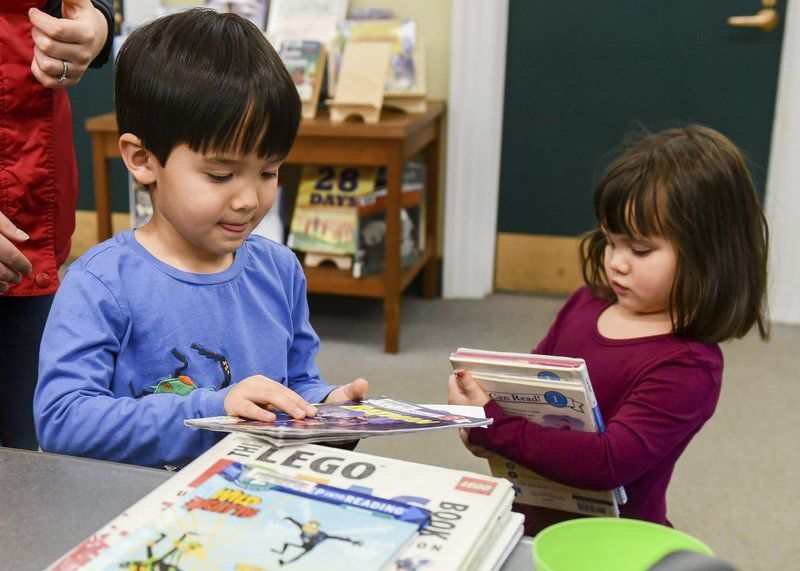 JAIME CAMPOS/Staff photoSiblings Elias and Renee Parker, 5 and 3, respectively, check out books at the Beverly Public Library on Monday. 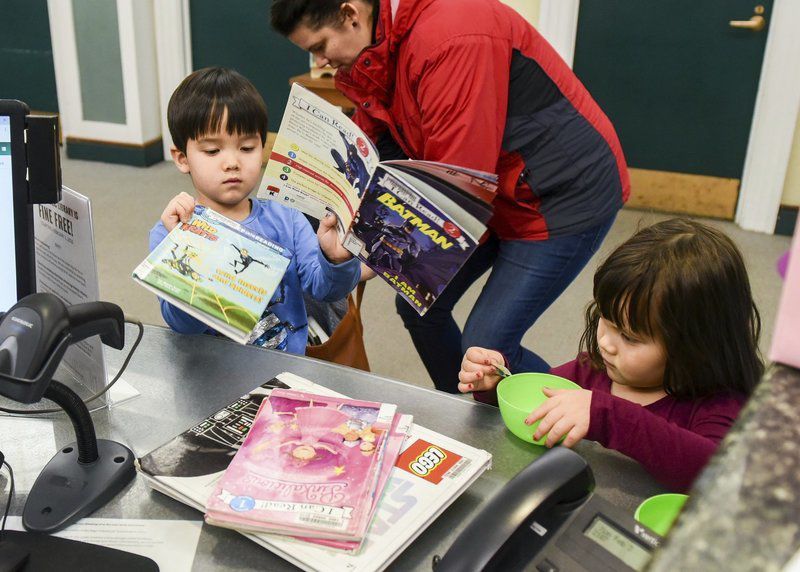 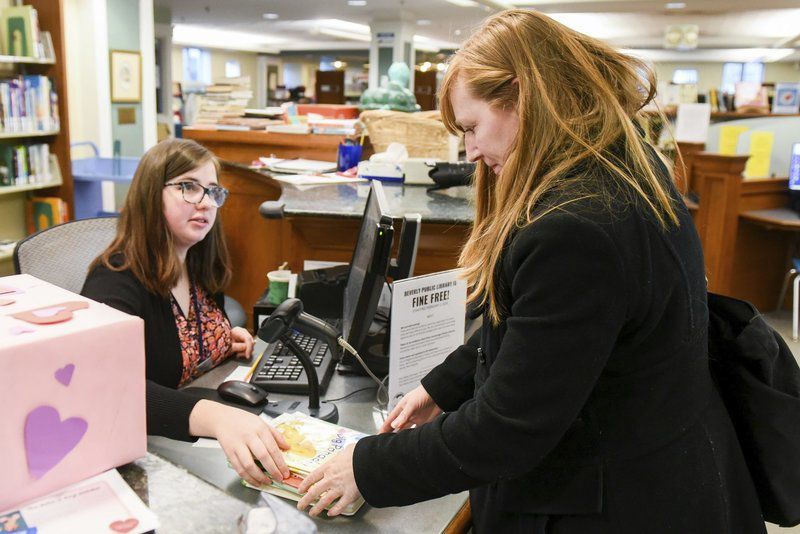 JAIME CAMPOS/Staff photoAssistant Library Director Allison Babin is looking forward to increased activity at her branch as fines for overdue books at the Beverly Public Library were eliminated effective Feb. 1.

JAIME CAMPOS/Staff photoSiblings Elias and Renee Parker, 5 and 3, respectively, check out books at the Beverly Public Library on Monday.

BEVERLY — The Beverly Public Library has joined the growing number of libraries that have eliminated overdue fines.

Beverly ended the fines for overdue books and materials on Saturday, saying the penalties are not effective and in fact can keep people away from the library. Staffers put up signs in the library and messages on its website declaring its new "Fine Free" status.

"We want to be a welcoming place," library director Anna Langstaff said. "Some people feel ashamed that they have fines and it creates a negative view of the library. We just want to switch that around."

Langstaff said library staffers, trustees and the mayor's office began discussing the possibility of getting rid of overdue fines about a year ago. Recent research has shown that the fines not only can be a barrier to people using the library but don't serve their intended purpose of incentivizing people to return books on time.

Local libraries such as Danvers, Hamilton-Wenham, Andover, Reading, Wakefield and Newburyport have all eliminated fines, according to the Beverly Public Library's website. Langstaff said major library systems in San Diego, Denver, Salt Lake City, Nashville and others have done the same.

Alex Lent, director of the Peabody Institute Library in Danvers, said more libraries have been eliminating overdue fines since the Colorado State Library released a report in 2018 saying that fines and fees prevent low-income parents from using public libraries. The report said there was also little evidence that fines lead to the return of items in a timely manner.

Lent said circulation at the Danvers library has gone up by about 35% since it eliminated daily overdue fines last July. The library introduced automatic renewal at the same time, which is also probably a factor in the increase in usage, he said.

"It's been great," Lent said. "We haven't seen an increase in lost items but we have seen a pretty large increase in circulation. So far, so good."

Langstaff said the Beverly Public Library, which includes the main branch on Essex Street, a branch in Beverly Farms, and the Bookmobile, collects $12,000 to $15,000 a year in overdue fines. She said the money goes back to the city, not to the library's budget, and that it doesn't amount to a lot of money anyway "in the large scheme."

The library's annual budget is about $2 million, and it also receives assistance from the Friends of the Beverly Public Library and library trust funds.

"We have other ways of making up for that," Langstaff said, referring to the revenue from the fines.

Langstaff said the fines, which were 5 cents per day, might not seem like much, but can add up and become a problem for families with low incomes and seniors on fixed incomes. Families with young children who check out multiple books at a time can quickly rack up fines, she said.

"It was only 2 cents a day for children's books, but all of a sudden you can owe $5 to $10 in fines," Langstaff said. "If you're on a limited income, you're going to pay for food or rent before you pay library fines."

The policy will also end an inequity between people who borrow physical materials and those who borrow online, since there are no overdue fines for digital materials, the library said.

Carolyn Palmer, who was at the library on Essex Street on Monday with her 9-year-old son and 4-year-old daughter, said she supports the decision "as a parent who's really lazy at getting her books back."

But Palmer, a 39-year-old Beverly resident added that she liked when the library allowed you to donate food to Beverly Bootstraps in lieu of paying fines and hoped that option would continue.

"I liked the idea that it still held me accountable," she said.

Catherine Donovan, 59, of Beverly, said she disagreed with the no-fine policy. If people reserve a book online, they could end up waiting longer for it to be returned since there are no consequences, she said.

"The last time I was here I gave 70 cents (in overdue fines)," Donovan said. "It keeps people honest. If those repercussions aren't there, why would they return them?"

Under the new policy, the library will continue to issue due date reminders as well as overdue notifications. If an item is not returned within six weeks after the due date, borrowing privileges will be suspended. The library will still charge for lost or damaged materials.

For people who don't mind paying fines and want to help the library, officials are encouraging donations to the Friends of the Beverly Public Library.

Langstaff said she is looking forward to seeing the impact of the new policy.

"We're in the business of sharing the wealth that we have in our collections," she said. "We want people checking out our books."