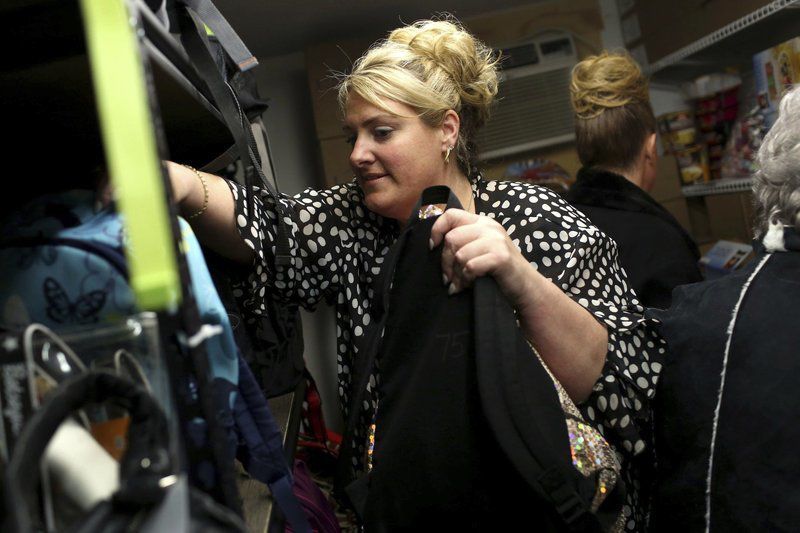 File photoCara Murtagh helps to pack backpacks with her mother, sister and aunt, as well as Peabody School Committee member Jarrod Hochman back in 2017. 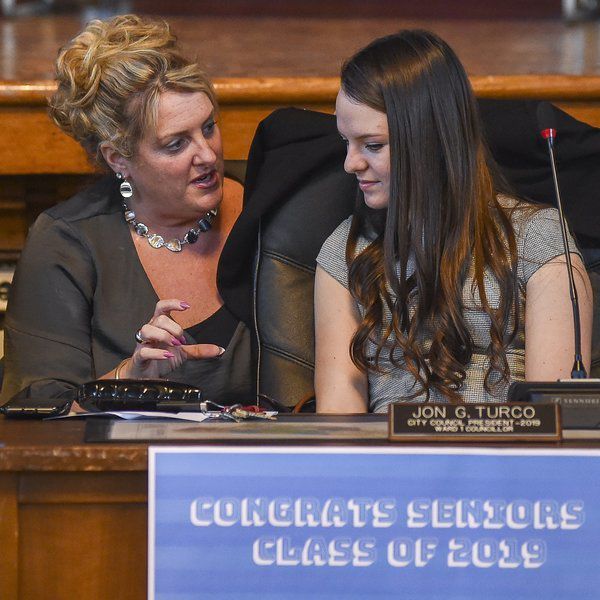 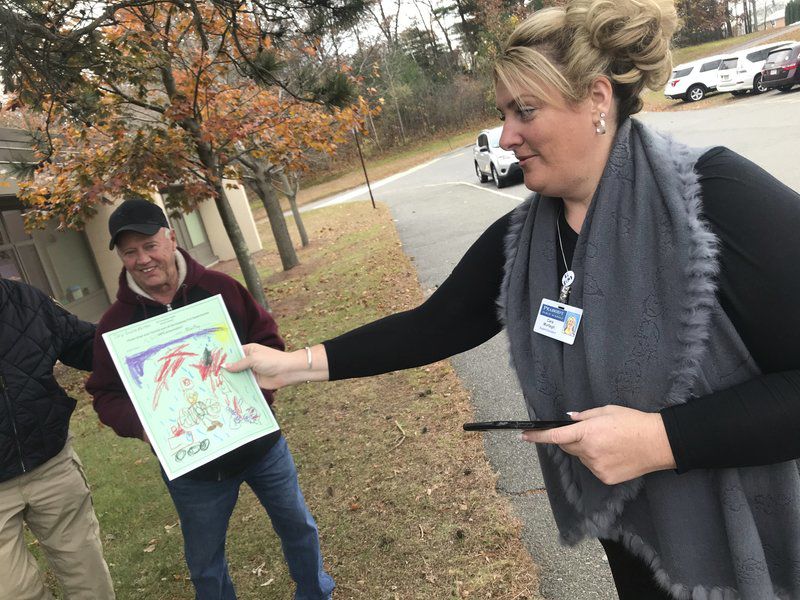 Ethan Forman/Staff photoSuperintendent Cara Murtagh holds up McCarthy Elementary School kindergartner JJ Della Porta's winning fire prevention drawing earlier in November. Kindergartners at each school in the city had the chance to win a ride to school on a fire truck based on their fire prevention drawings. Murtagh was one of the contest's judges. 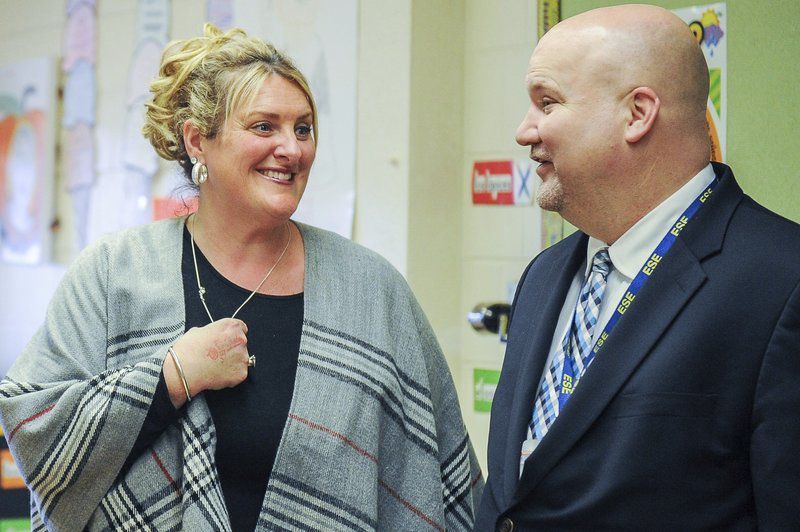 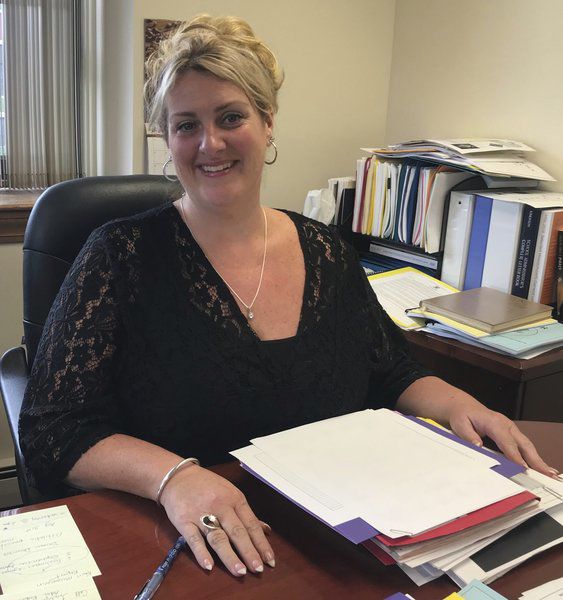 File photoCara Murtagh helps to pack backpacks with her mother, sister and aunt, as well as Peabody School Committee member Jarrod Hochman back in 2017.

Ethan Forman/Staff photoSuperintendent Cara Murtagh holds up McCarthy Elementary School kindergartner JJ Della Porta's winning fire prevention drawing earlier in November. Kindergartners at each school in the city had the chance to win a ride to school on a fire truck based on their fire prevention drawings. Murtagh was one of the contest's judges.

PEABODY — The city has been stunned by the loss of "a great leader" with the death of the schools' beloved and devoted superintendent, Cara Murtagh.

"We are shocked and saddened by the sudden death of our beloved friend and colleague Cara Murtagh," said Bettencourt, in a statement. "Superintendent Murtagh's talent, energy and can-do spirit inspired all those whose lives she touched. Her selfless devotion to our students, faculty and staff lifted the Peabody School Department. I was honored to work with Cara every day and proud to call her my friend. On behalf of our entire community, I extend our heartfelt sympathy and loving support to Cara's family."

School Committee members say an emergency meeting is planned for Saturday to discuss the way forward.

"She dedicated her whole life to our schools and our kids," said a heartbroken Beverley Griffin Dunne, a longtime committee member who spoke about Murtagh's boundless optimism in the face of many challenges during her first year and a half as superintendent.

"No matter how bad things were, she could make you smile," Dunne said.

Murtagh was nearly midway through her second year as superintendent, and had spent nearly her entire career in the city's schools.

Those who knew her say the Peabody native and resident lived the school department's motto: "Every student, every day," and seemingly knew every student by name. The Peabody Public Schools comprises approximately 6,000 students and 450 teachers in 10 schools.

"The city has lost a gem," said Herb Levine, a Peabody resident who worked closely with Murtagh for four years while he served as an interim superintendent and in other roles.

He said a lot of people will speak of her work ethic, talent, commitment and her father, Jack Murtagh, as an iconic principal in Peabody, but what he (Levine) observed was her connection to her former students from when she was principal of the Carroll School. He recalled how students, much older now, approached her in the corridors of the high school, and she would know their histories and their stories.

It's those interactions that define the greatness of an administrator or a principal, said Levine.

"That day-to-day connection with people and children, she had a tremendous compassion and empathy for people in difficulty," he said.

In a Facebook post, Salem Mayor Kim Driscoll also offered her city's condolences to the community and pledged help with supportive services if needed.

"I had the opportunity to meet Superintendent Murtagh on several occasions and always appreciated her optimism and readiness to do good things for kids. Her smile was infectious, as was her commitment to Peabody students," Driscoll said.

Murtagh's death coincides with an already sorrowful time for the schools. On Nov. 19, Jackson Frechette, a 13-year-old Higgins Middle School student, was struck and killed crossing Route 114 on a bicycle.

Many who knew Murtagh described her as a hard worker. Officials say they could see her car parked at the school department office on Lowell Street as late as 10 p.m. on most nights.

School Committee member Andrew Arnotis described a sense of shock and sadness among the board.

"She exemplified everything you would want in a superintendent," Arnotis said, "her compassion, kindness and commitment to Peabody." He said Murtagh treated every student as her own, and she went above and beyond in her job. His thoughts were with her family.

City Council President Jon Turco, a father of a freshman and a senior at Peabody High, said Murtagh gave her heart and soul to the city for the past two decades.

"It's a heart-breaking situation," he said.

'She cared deeply for the kids'

Murtagh has worked for the schools in her hometown for more than 20 years; she was promoted to lead the district in 2018. Before that, she spent six years as assistant superintendent.

She began studying nursing at Emmanuel College in Boston but instead graduated with a bachelor's degree in education studies with a concentration in history. She later earned her master's in teaching from the same college.

In 1997, she started as a teacher at St. John the Baptist School in Peabody, then moved to the Carroll School, where she was a teacher, assistant principal and principal. She was also principal for a year at the Center School.

Parent Jennifer Vargas said both of her daughters, now in high school and at the Higgins, had Murtagh as their principal.

"There's no one that was more compassionate about our children than her," Vargas said. "She cared deeply for the kids. Never forgot their names. Knew every child's name in the city of Peabody."

Murtagh made it a point to regularly visit all 10 of the city's schools, an effort she called "Walk through Wednesdays." And she often deflected her accomplishments on to her leadership team.

"A great leader has to be visible, and a great leader has to be accessible, and you are both," said School Committee member Joseph Amico in August, during a committee discussion on Murtagh's job performance. "You are probably the hardest working employee in the city, and a lot of that goes to your reaching out to families and the students all year long, so I just want to thank you for that."

"I think you have done a terrific job this year, your first year," Bettencourt said at the time of the evaluation. "You were hit with a wide variety of very challenging budget items, situations, challenges and you rose to the occasion and I think even better years are ahead for you."

At the time, Murtagh thanked other district officials, along with the schools' secretaries, teachers and families, for their work.

"I could not possibly do my job without the collaboration and support of the mayor, School Committee, my incredible leadership team," she said.

Among her many initiatives this year included selecting Chris Lord to serve as principal at Peabody High, after former principal Eric Buckley resigned unexpectedly for personal reasons after the end of the last school year. Lord is also the district's assistant superintendent.

Murtagh also helped set up a summer parent/student information center at Higgins Middle School, which provided a one-stop location for parents seeking to check out Chromebooks, register a new student or submit immunization forms. She recently helped to judge drawings for a kindergarten fire prevention program, in which one student from each school won a ride to school in a fire truck.

In the spring, after a difficult budget year, she successfully advocated before the City Council for a midyear $1.16 million supplemental budget appropriation driven by increased costs for out-of-district tuition and homeless transportation. She oversaw the beginning stages of a project to replace windows and the heating system at the Welch School on Swampscott Avenue, as well as the first steps of working with the state to either renovate or replace Peabody Veterans Memorial High School.

"As part of the community, we are devastated by today's news," Whiting said.

She does not have children of her own. In an interview last year, she said, "I have 6,000 I have to take care of every single day ... I treat the children in this district like my own. I have to. I worry about them just like I would if they were my own."