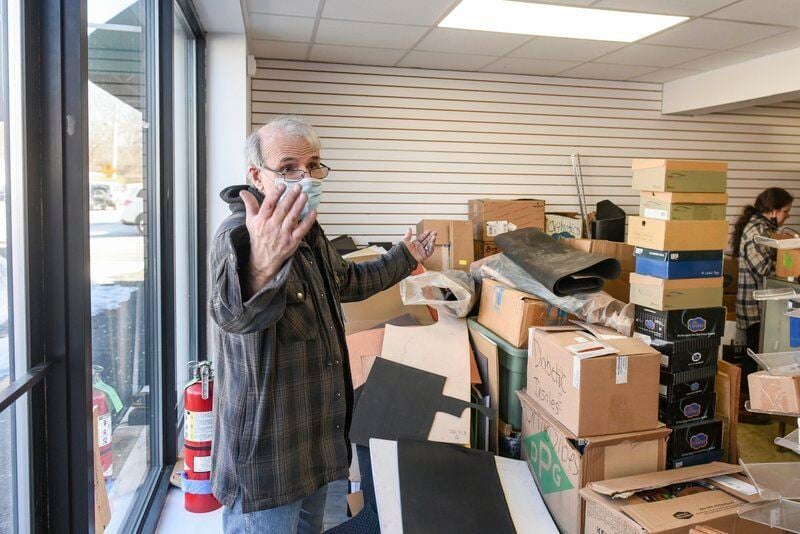 Gagnon's Shoe Repair shop owner Richard Gagnon talks about how rent in Salem grew too expensive for his business, prompting him to move the 75-year-old company to Beverly amid the coronavirus pandemic. JAIME CAMPOS/Staff photo 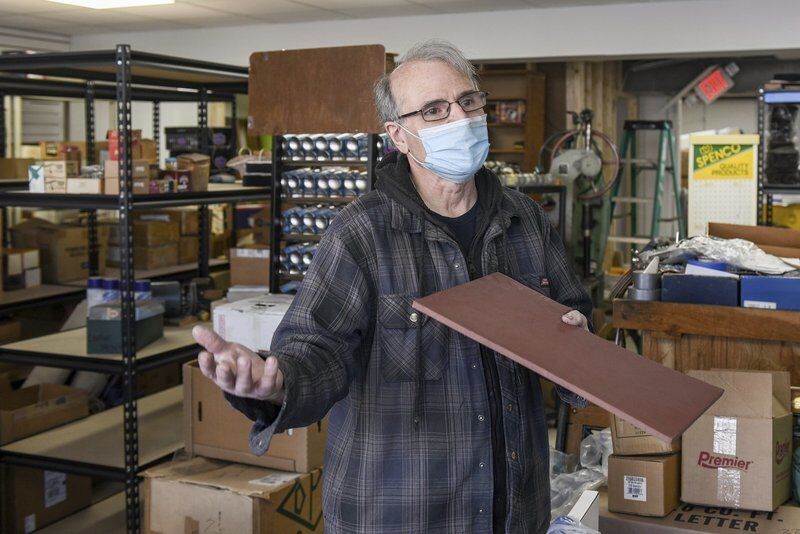 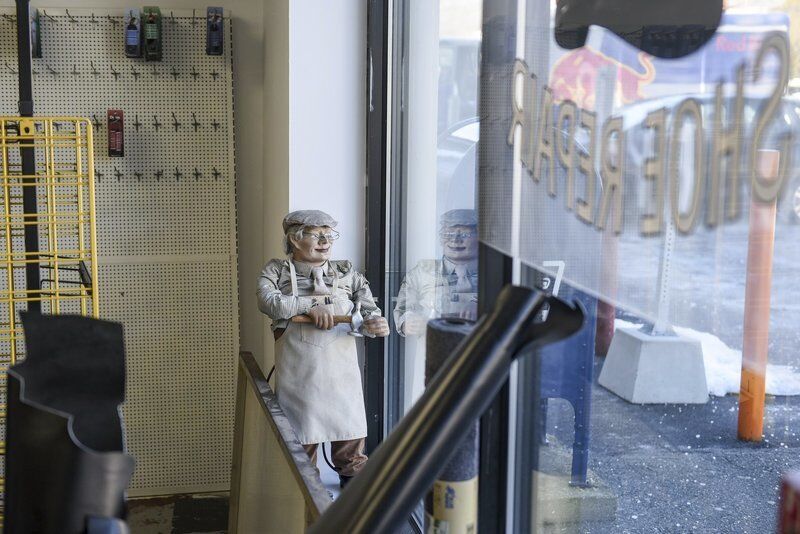 A shoemaker statue displayed in the window at the new Gagnon's Shoe Repair shop in Beverly. JAIME CAMPOS/Staff photo 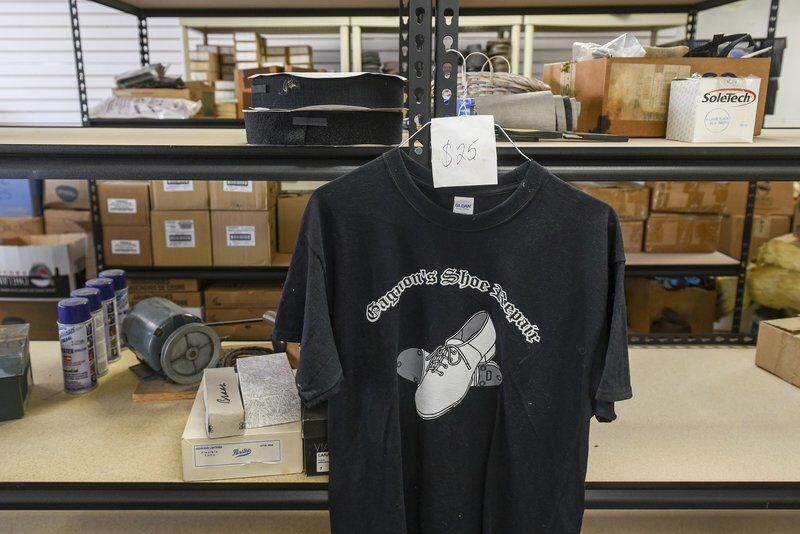 A shirt merchandise for sale at the new Gagnon's Shoe Repair shop in Beverly after 75 years of service in Salem. JAIME CAMPOS/Staff photo 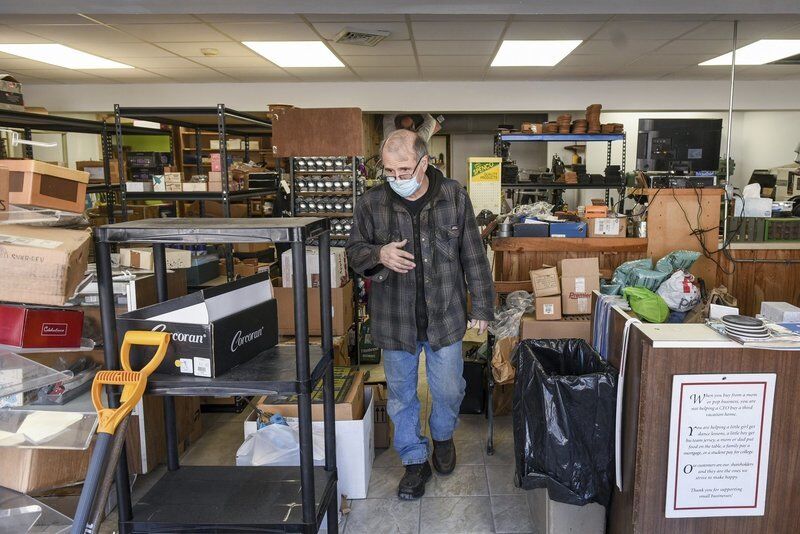 Owner Richard Gagnon navigates his way through boxes and other things at the new Gagnon's Shoe Repair shop in Beverly. JAIME CAMPOS/Staff photo 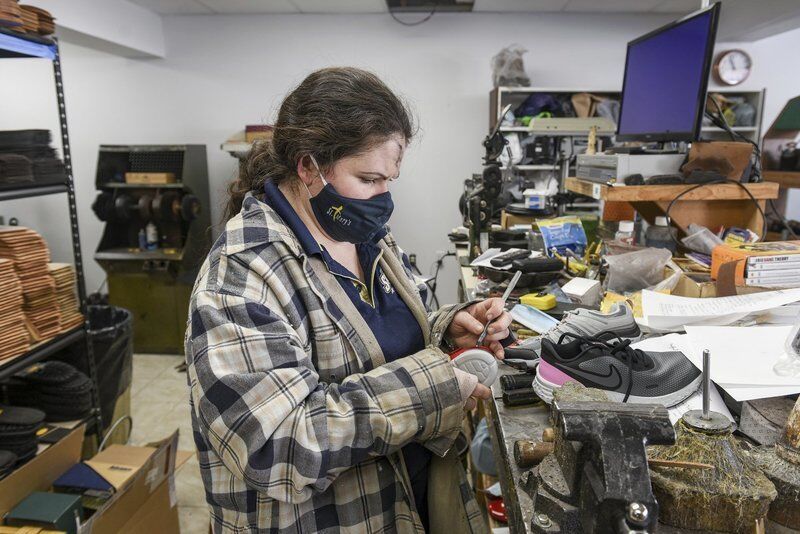 Gagnon's Shoe Repair shop owner Richard Gagnon talks about how rent in Salem grew too expensive for his business, prompting him to move the 75-year-old company to Beverly amid the coronavirus pandemic. JAIME CAMPOS/Staff photo

A shoemaker statue displayed in the window at the new Gagnon's Shoe Repair shop in Beverly. JAIME CAMPOS/Staff photo

A shirt merchandise for sale at the new Gagnon's Shoe Repair shop in Beverly after 75 years of service in Salem. JAIME CAMPOS/Staff photo

Owner Richard Gagnon navigates his way through boxes and other things at the new Gagnon's Shoe Repair shop in Beverly. JAIME CAMPOS/Staff photo

When Gagnon's Shoe Repair opened 75 years ago, it was just one of more than a dozen cobblers competing to work on every pair of shoes walking around Salem.

Today, the business is one of the last vestige of an era of footwear lost to the Payless generation of disposable sneakers, and its status as the only shoe repair business in Salem has also ended with a recent move to 244B Elliott St. in Beverly.

"I've been in Salem all my life, all my shoe-repairing life," second-generation owner Richard Gagnon said. "I tried to stay in Salem as best I could. But when you look at 25 different places to move into and you see nothing... the stuff they're trying to rent? Unbelievable."

In every case, Gagnon said, the rent was either too high or the space was too large.

Gagnon's Shoe Repair was started by Edward "Pete" Gagnon, who Richard said was 50 the year he was born.

"My dad started on Leach Street," Richard Gagnon said. "He took over... I think it was St. Pierre's Shoe Repair."

The business relocated to Gloucester soon after due to redevelopment in the building on Leach Street. It eventually returned to Salem, however, taking up a 200-square-foot space "downstairs in a little corner" at Almy's Department Store, Richard Gagnon said.

Richard joined the business full-time 41 years ago, by which time he was 24. He took the business over after his father died in 1987. Today, he's 65 and has no plans for retirement.

"I've diversified. Depending on shoe repairing, you aren't going to make it," he said. "'Toss 'em' — that's the thinking now. But thank God for the lawyers and judges, because they still wear the Allen Edmonds', the Johnston & Murphys of the world."

He then looked over the Salem News reporter standing in the shop, noting a pair of all-black sneakers with velcro straps.

"When I was a kid, a reporter never would have come dressed like that," he said, laughing. "They were always in a suit."

Today, Gagnon's customers are mainly from the city's courthouses and law offices on Federal Street.

"I do a lot of lawyers, judges obviously, because I was close (by)," Gagnon said. "I do the state troopers — I've got the accounts; there's three of us in the state that do the boots — and then there's my orthopedic work."

Gagnon said he isn't concerned about losing customers after leaving the business' last home on New Derby Street to begin the new year.

"I do have a very loyal following through my regular customers, and 98% of them said they were going to follow me wherever I went," he said. "That really helps."

Among those loyal customers is Essex District Attorney Jonathan Blodgett.

Blodgett, a Peabody native, traced their relationship back to when he was plate manager for Murphy's Whips — a baseball team named after team sponsor and state Senate Majority Whip Jack Murphy — in the 1980s. Gagnon was an umpire in the North Shore baseball league at the time, Blodgett recalled.

"I always went to Gagnon's to get my shoe repairs, have belts repaired," Blodgett said. "I could go in there at 6:30 in the morning, and he was always in there."

Longtime Salem resident and businessman John Boris, who chairs the Salem Housing Authority Board, had much the same to say of Gagnon.

"That's one of the places I pop in for laces and soles. They're good people," said Boris. "They're going to be missed greatly. I'll still go to Beverly, but we could use them in Salem. We could use them."

Although he conceded that the shoe industry has changed, Boris said there will always be a need for shoe repairs.

"A lot of it is economic. The perception is if you get your shoes fixed, it's cheaper than buying a new pair," he said. "And nobody does it better than the Gagnons."