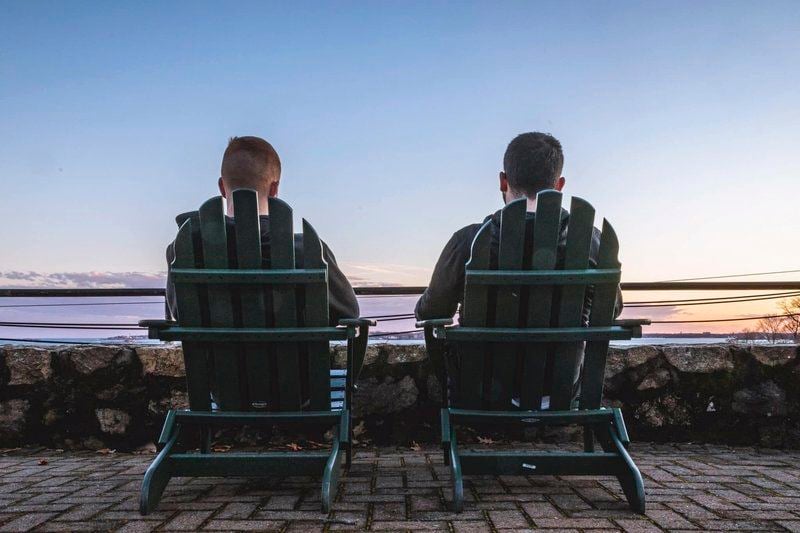 Associated PressEndicott College seniors Rob Ackerman, left, and Nick Grace sit on the school’s campus in Beverly earlier this month. Due to the coronavirus outbreak it’s not clear whether the campus will reopen in time for graduation. 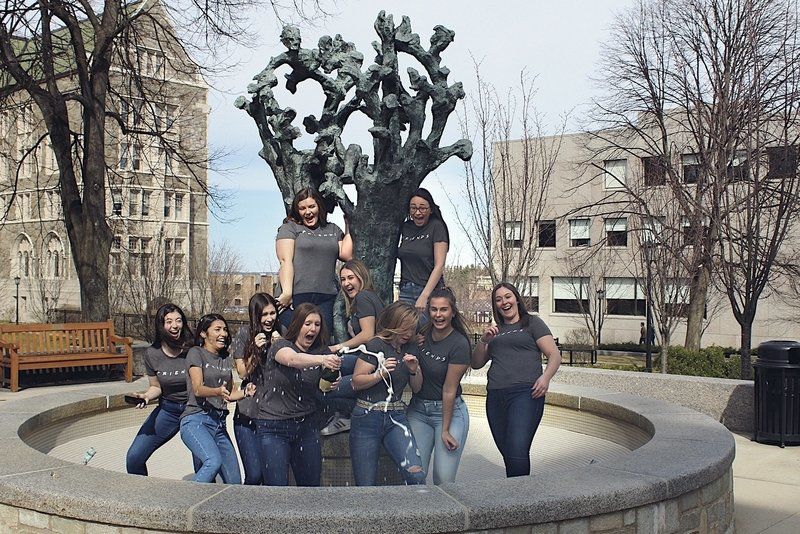 In this March 14, 2020 photo provided by Jaimie Kirkpatrick, Boston College seniors pop champagne beside the Tree of Life sculpture on the school's campus in Boston. It is uncertain if the campus will reopen in time for graduation. (Jaimie Kirkpatrick via AP)

Associated PressEndicott College seniors Rob Ackerman, left, and Nick Grace sit on the school’s campus in Beverly earlier this month. Due to the coronavirus outbreak it’s not clear whether the campus will reopen in time for graduation.

In this March 14, 2020 photo provided by Jaimie Kirkpatrick, Boston College seniors pop champagne beside the Tree of Life sculpture on the school's campus in Boston. It is uncertain if the campus will reopen in time for graduation. (Jaimie Kirkpatrick via AP)

It was during Act 1 of the final dress rehearsal for Puccini’s “La Rondine” at the Peabody Conservatory that the school president sent out an email canceling all nonessential gatherings because of the coronavirus pandemic.

Cast members quickly messaged friends, who streamed into the theater to catch the remainder of the only performance in the scheduled four-day run.

After all, the show must go on. And the graduation. And the senior sunrise, the pub crawl, the lake plunge and dozens of other ceremonies, productions and traditions that college students scrambled to salvage — a last, lasting memory before they were kicked off campus to ride out the outbreak from home.

“I’ve been following the news, and it doesn’t look like (graduation) is going to happen any time soon,” said Endicott College senior Nick Grace, who took a last lap around the silent campus on Boston’s North Shore before leaving. “If we don’t have our celebrations, we’re kind of robbed of our end-of-year ceremonies. Even if graduation itself is salvaged, it’s all of those moments.”

At Peabody, Hannah Alexandra Noyes broke into tears performing the role of Lisette the maid — not because the opera’s love story was doomed, but because her final year at the Johns Hopkins University music school was. In the conservatory’s dining hall, the orchestra hastily arranged chairs for a performance of Tchaikovsky’s Fifth Symphony that had originally been planned for the 1,000-seat, acoustically precise Shriver Hall.

“I emailed the conductor and said, ‘If I set up the concert, will you come and conduct?’ And he said, ‘Sure,’” French hornist Layan Atieh said. “From there, it all went and snowballed.”

Hundreds filled the cafeteria to listen. One of the online videos had more than half a million views.

“Just having that many people show up, come together and forget about the stress of this pandemic for this little bit of time, this is what it’s about,” Atieh said. “If I had the choice, I wouldn’t go back to the concert hall. I would choose that.”

More than 130,000 Americans have been diagnosed with COVID-19, leading to at least 2,300 deaths, according to Johns Hopkins. As millions of people worldwide sheltered in place to slow the pandemic, most U.S. colleges this month canceled sporting events and artistic performances and sent students home to finish the semester online.

For seniors poised to graduate, it was an abrupt end to what wasn’t quite four years of late-night bonding and all-night studying.

And with widespread bans on larger gatherings soon to come, many rushed to forge one more memory from their college days.

“At that point it was we either do it this night or never. Tomorrow we shouldn’t be doing anything in bigger groups,” said Colgate University senior Caroline Barrett, who joined her classmates in the traditional all-night vigil followed by a dip in Taylor Lake.

Other Colgate seniors scurried to hand out their Torch Medals, which honor a member of the school or Hamilton, New York, community who had an impact on their time there. Dorm reunions and sorority brunches — usually held during the senior week between exams and graduation — were hastily arranged.

“People tried to squeeze in seeing as many people from different parts of their Colgate life,” Barrett said. “Everyone just wanted to spend time with each other.”

Before the slew of cancellations, more than 500 members of the Boston College Class of 2020 stayed up all night to watch day break over the Chestnut Hill reservoir. Fake weddings were held — a tradition of unknown origin or purpose — and nightly trips to the dive bar Mary Ann’s became the norm.

“I had a pretty tough three years at BC. I was hoping this would be a positive year,” said senior Louisa MacEwan, who has since developed symptoms of COVID-19 and remained in her off-campus apartment after the campus was cleared.

“So for me, it was tough,” she said. “It’s going to be different receiving a diploma in the mail versus walking across the stage, and sharing those experiences with my friends.”

At Elon University, seniors took time to jump in the four fountains on campus before scattering back to their hometowns. The woodsy North Carolina school — named after the Hebrew word for oak — gives each incoming freshman an acorn; before leaving four years later, they receive saplings to plant at their next home.

“I wasn’t super upset about it, but it’s kind of sad that we’re the only class that’s not going to be able to do it, in however long that’s been going on,” Elon senior Ari Denberg said. “All those things I was planning to do over senior week, it’s hard not getting that closure.”

At Rice University in Houston, students traditionally walk through the main archway, known as the Sallyport, only twice — once during the freshman matriculation ceremony, and again at commencement.

After being told they would likely finish the semester online from their homes, about one-fourth of the 1,000-member class of ‘20 paraded through the archway behind the heraldic flags from their residential colleges; the Marching Owl Band — or MOB — played the processional “Pomp and Circumstance.”

“People were crying when they saw how many people were there,” senior Christina Tan said. “Honestly, everyone was rushing so hard to cancel their plans. People weren’t thinking about graduation. Everyone was so stressed about leaving. I think it was really nice to take an hour out of that stressful time to have that.”

Back at their dorm, residents of Rice’s Wiess College were called to a stage that had been set up for a canceled production of “Hello, Hamlet.” Junior Lauren Biegel presented them with a note from their advisers, rolled into a scroll like a diploma, and shook their hands; she wore a rubber glove.

Tan, who set up the mock graduation on Facebook, said students were worried the school would shut it down because of an impending limit on large gatherings. Instead, some faculty members showed up in full academic regalia; when Rice President David Leebron heard what was happening, he came out from his office to take pictures.

“They took it into their own hands in a creative, positive way, and did something for themselves — and most importantly, they did it for their classmates,” Leebron said in a telephone interview.

“I was just so moved by the whole thing,” he said. “(There was) that sense of sadness, but taking that difficult situation and finding something to do that made everybody who is there feel a little bit better.”